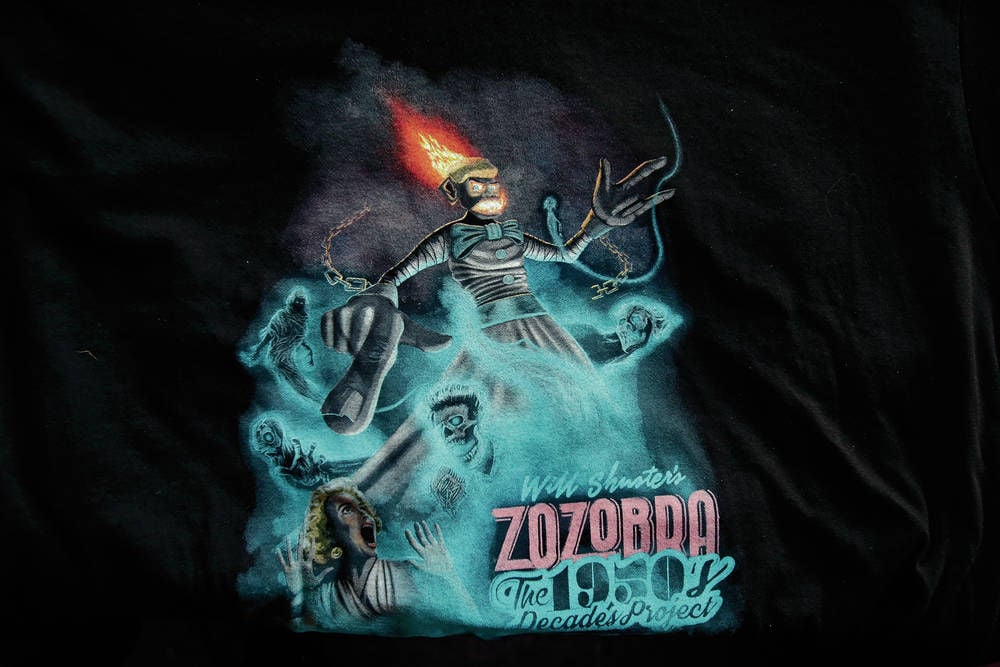 A Zozobra T-shirts was on display Friday at the Fuego game at Fort Marcy Ballpark. Luis Sánchez Saturno/ The New Mexican 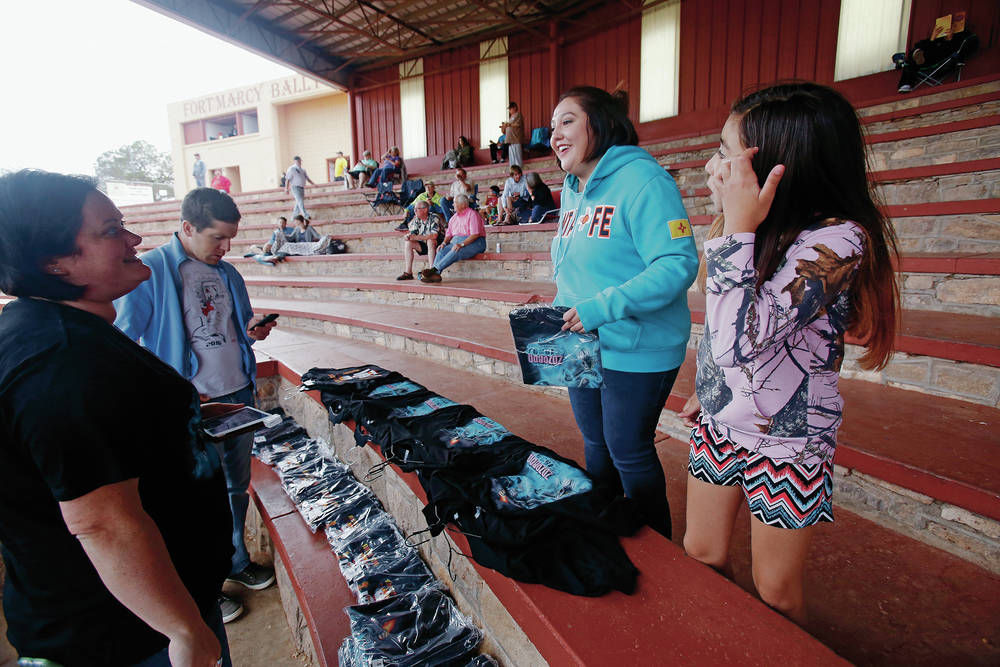 Moni Rivera, back right, and Larissa Montoya, 9, front right, who handle the Fuego’s statistics, score board and music at the press box, buy Zozobra T-shirts from Jessica Miller, left, a board member at Kiwanis Club of Santa Fe, before the game Friday at Fort Marcy Ballpark. Luis Sánchez Saturno/ The New Mexican

A Zozobra T-shirts was on display Friday at the Fuego game at Fort Marcy Ballpark. Luis Sánchez Saturno/ The New Mexican

Moni Rivera, back right, and Larissa Montoya, 9, front right, who handle the Fuego’s statistics, score board and music at the press box, buy Zozobra T-shirts from Jessica Miller, left, a board member at Kiwanis Club of Santa Fe, before the game Friday at Fort Marcy Ballpark. Luis Sánchez Saturno/ The New Mexican

Whereas most people gazed upon the green grass of Fort Marcy Ballpark on Friday night and saw the expansive home of Santa Fe’s professional baseball team, Ray Sandoval pictured 60,000 people gathering out there to watch Old Man Gloom go up in smoke.

The event coordinator for the Kiwanis Club of Santa Fe’s 93rd burning of Zozobra, Sandoval was on hand for Friday’s Zozobra Night at Fort Marcy. The club-sponsored game gave Fuego fans a chance to buy tickets to the Sept. 1 burning as well as buy custom T-shirts designed by a local artist.

It was the second go-round for Zozobra Night this summer. The first one was, fittingly, washed out in June by gloomy weather. Friday’s conditions were just as bad right up until the first pitch, which was delayed half an hour by a steady rain that saturated the field and threatened the action for a second straight night.

It may have had an impact on the turnout as a crowd of about 200 showed up to watch the Fuego lose 14-10 to visiting Trinidad, a loss that pushes Santa Fe even further out of contention in the Pecos League’s Mountain Division race. With just 15 games left, the Fuego are in fourth place, six games behind division leader Alpine.

It’s a far cry from the excitement building for Zozobra. Last year’s crowd of about 55,000 will surely swell to Sandoval’s expectations with the new amenities the Kiwanis and the city are working on to change the look of this year’s event.

“Finishing the bridge is a big change that will make the entire experience better,” Sandoval said, gesturing toward the construction project beyond the fence in right field that will add a 90-foot wide pedestrian walkway across the expansive arroyo that, for about 70 years, had just three access points.

Sandoval said the project provides much-needed entry and exit points for the tens of thousands of people who flock to Fort Marcy every fall. Until now, the only way across the arroyo were those old walkways that were notoriously wobbly on the busiest night of the year.

Two of the three bridges will still be used, but only as exclusive entry points for the high-paying customers who take advantage of the new seating options. The majority of ticketholders will have access to the new crossing point, something the city has been working on for the entirety of the Fuego season.

It will be completed in late August and it’s one of several additions to this year’s event. The bridge will be blessed in a dedication ceremony the weekend before the burning.

That week will see a flurry of activity that will add custom seating on the grandstand of Fort Marcy’s bleacher seats along third base by the visitor’s dugout. Behind home plate will be a 30-foot rise for exclusive ticket holders. Down the left field line is another pair of sections for prime seating.

Sandoval can see it all clearly.

He can’t wait for Zozobra fans to see it, too.

“There are so many changes to this year’s event and, really, it will be great to see it,” he said. “We’ve put in a lot of work to improve something that has been done well for years.”

One of the early changes was a T-shirt design that the Kiwanis commissioned from a competition of local designers. The artwork depicted on the shirts sold at Friday’s game featured a chained Old Man Gloom surrounded by swirling spirits a woman cowling in fear.

“What we really want to do is use Zozobra as a way to get people from the community involved with what we’re doing, so if having people submit their work for a shirt gets more interest, then we’re prepared to do it,” Sandoval said.

In just six weeks it will all come together. On Friday night, fans got an early taste.

Santa Fe never led Friday’s game, giving up runs in each of the first five innings as the Triggers opened a commanding 13-5 lead. The Fuego did battle back to make things interesting, but it simply wasn’t enough to overcome Trinidad’s 19-hit performance that included six home runs.

The top of the Triggers’ lineup was particularly damaging as the top six batters had at least two hits apiece. That includes two solo home runs by Jordan Van Atta.

The Fuego (24-21) stayed competitive with five home runs of their own. That included the first of the season by A.J. Flores and the league-leading 18th of the year from Matt Haskins.

The loss went to Jesse Stinnett (0-1), who was making his Fuego debut. He pitched just four innings, giving up 10 hits and seven runs.

The Fuego and Triggers wrap up their series with games Saturday and Sunday night at Fort Marcy. First pitch is scheduled for 6 p.m. both days.