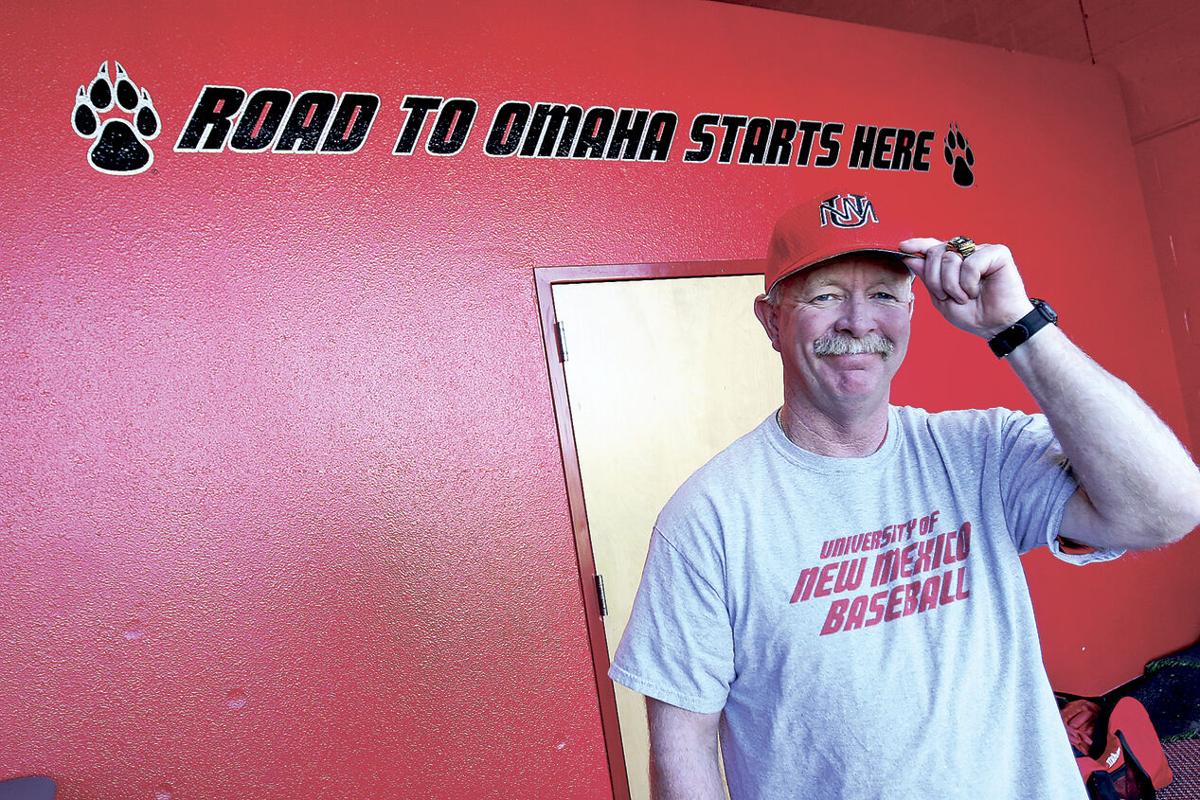 UNM baseball coach Ray Birmingham announced he is retiring after the end of the 2021 season. 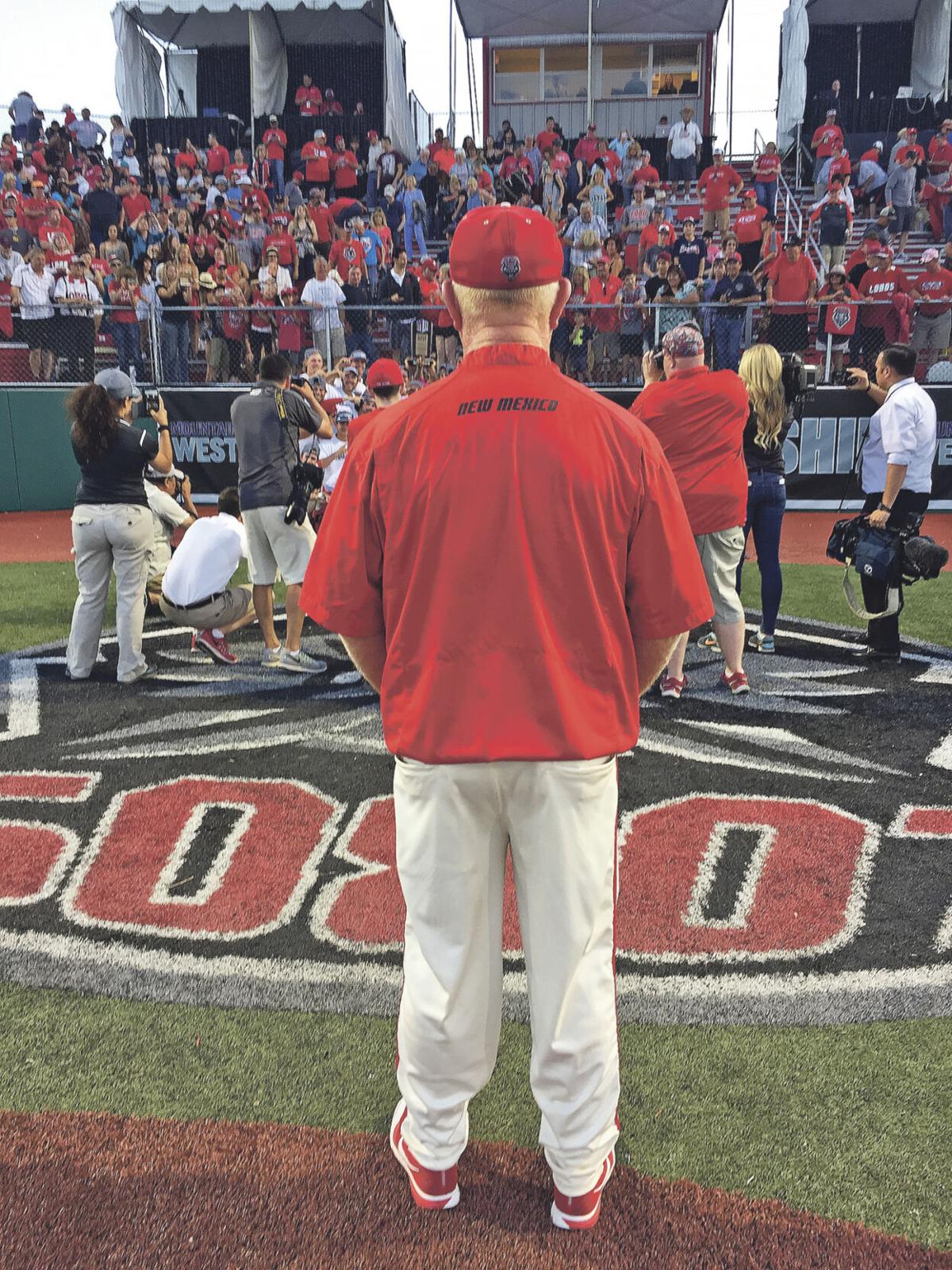 UNM baseball coach Ray Birmingham looks on as his team poses with its fans after winning the 2016 Mountain West Conference Tournament championship.

UNM baseball coach Ray Birmingham announced he is retiring after the end of the 2021 season.

UNM baseball coach Ray Birmingham looks on as his team poses with its fans after winning the 2016 Mountain West Conference Tournament championship.

ALBUQUERQUE — Ray Birmingham never actually applied for the job as head coach of the University of New Mexico’s baseball program.

He didn’t seek out the position and made zero inquiries about taking over a program he’d never really thought about.

In fact, as he stood on the field that might well one day bear his name following his retirement press conference Monday afternoon, the 66-year-old said he was leaning toward leaving the business altogether when the UNM post came open in 2007.

It’s a post he filled dutifully for 14 years, a post he will vacate when the 2021 season officially ends in just over a month. He leaves behind a career that includes more than 1,000 wins, hall of fame inductions for both the state and in his hometown of Hobbs, not to mention a list of more than 160 players who went on to play professionally.

“It’s time, I’m ready,” Birmingham said moments after addressing a few dozen fans who gathered in the grandstand of Santa Ana Star Field to hear him talk about his time as the Lobos’ coach and share a few memories from his past.

He talked about letters exchanged with Warren Buffett and experiences that helped highlight some of the greatest moments in UNM baseball history, like five trips to the NCAA Tournament and his no-flinch attitude about getting the Lobos to the College World Series in Omaha, Neb.

“They’re going to make it one of these days and even if I’m in a walker, I’m going to be there,” Birmingham said.

Then again, standing on the turf field he helped construct through years of hard work and diligent fundraising, he said he never really considered UNM a landing spot.

As memory serves, he was considering making a career worth seven figures by selling heavy machinery for a company based in Lubbock, Texas.

“I was the chief salesman from the [Texas] Panhandle all the way down to El Paso,” Birmingham said. “You’d have been able to come by my mansion and swim in my pool.”

Instead, he listened when then-UNM athletic director Paul Krebs left a voicemail on his office line. Krebs was in the market for a new coach and wanted to discuss the Lobos’ gig with the man who’d built a junior college supergiant in Hobbs. Birmingham was fresh off a World Series run with New Mexico Junior College, an event he’d won just a few years before with the Thunderbirds.

In coaching circles he was a JuCo legend. When he spoke, people listened — particularly when it came to hitting. His NMJC teams were ridiculously good at swinging the sticks, traits the Lobos would develop with Birmingham at the helm.

Back then, though, he was content in the existence he’d built for himself, happy with having made a powerhouse out of nothing at NMJC. He was making decent money — almost as much as UNM was offering at the time, he said — and his team had, arguably, a better facility than the one he’d inherit in Albuquerque.

Then known simply as Lobo Field, its natural grass field was unfit for a Division I team. There were no locker room facilities, no lights and nothing in the way of creature comforts for the fans. Birmingham said one of his initial meetings after taking the job was with then-Gov. Bill Richardson, who promised $3.5 million in state funds to build a new field.

That money never came, but it kick-started a yearslong quest for Birmingham to see the job through. First came the turf, then the fencing, lights, new dugouts and scoreboard, the upgraded entry pavilion and privately funded clubhouse, then finally the expansion of the grandstand that tripled the capacity.

It also included a large fencepost cemented into the ground outside the team’s indoor hitting cages, a post that had a slat of wood pointing in the direction of Omaha and showing how many miles separated UNM from the home of the CWS.

“If you remember the way this place was,” Birmingham said Monday, swiveling around to gaze across a facility that bears no resemblance to the one he took over in ’07, “it shows you how far we’ve come.”

UNM athletic director Eddie Nuñez said there’s no timetable on hiring a new coach, but both he and Birmingham said there is a name in mind. Birmingham said he wouldn’t have made Monday’s announcement if he were uncomfortable with the direction the program was taking.

So why now? Why step away when his facility is better than it ever has been, when he finally has the administrative support he’d long wanted, when everyone from the university’s president to the people who buy tickets are in lockstep with his vision?

Birmingham pointed to three framed photos of his grandchildren, two girls and a boy.

“I’m going to spoil the hell out of them,” he said, recounting all the moments he’d missed with his own kids while he was busy coaching — moments he vows not to miss with his grandkids.

His next endeavor won’t take him far, he said. He will continue to work in a limited capacity with Nuñez, serving as a public spokesman and tireless fundraiser.

For now, however, he’ll continue to coach.

After all, it’s a decision he made 14 years ago and is willing to see it through.