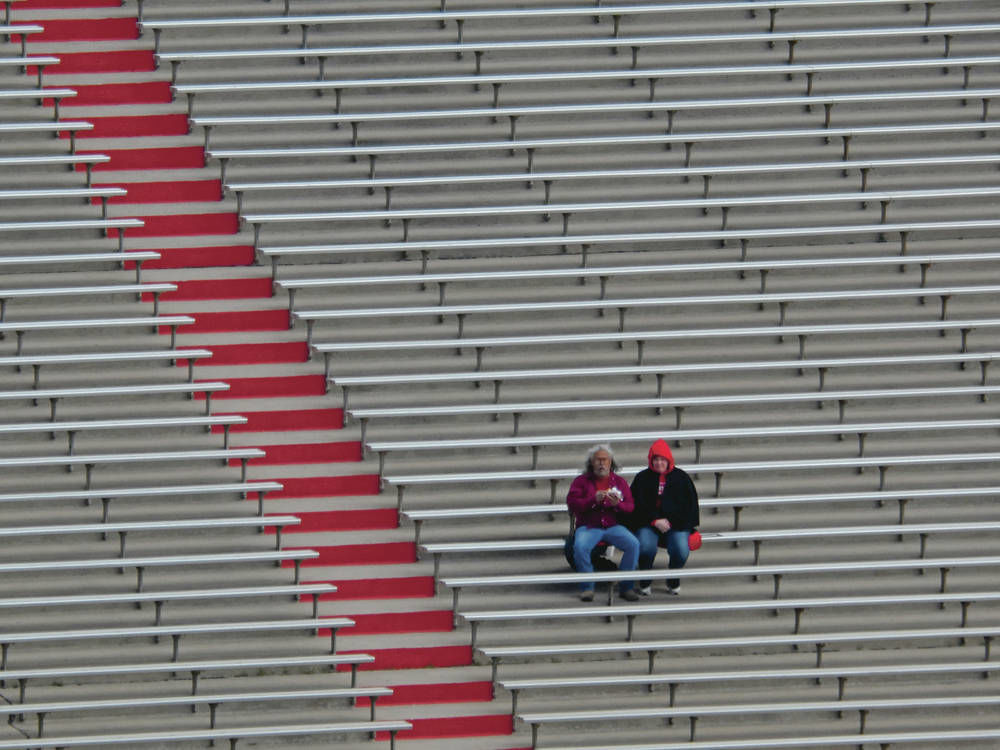 Lobos fans at a 2012 football game. The athletics department is battling a projected $7.8 million deficit because of declining revenue and rosy attendance projections that missed the mark.Will Webber/New Mexican file photo 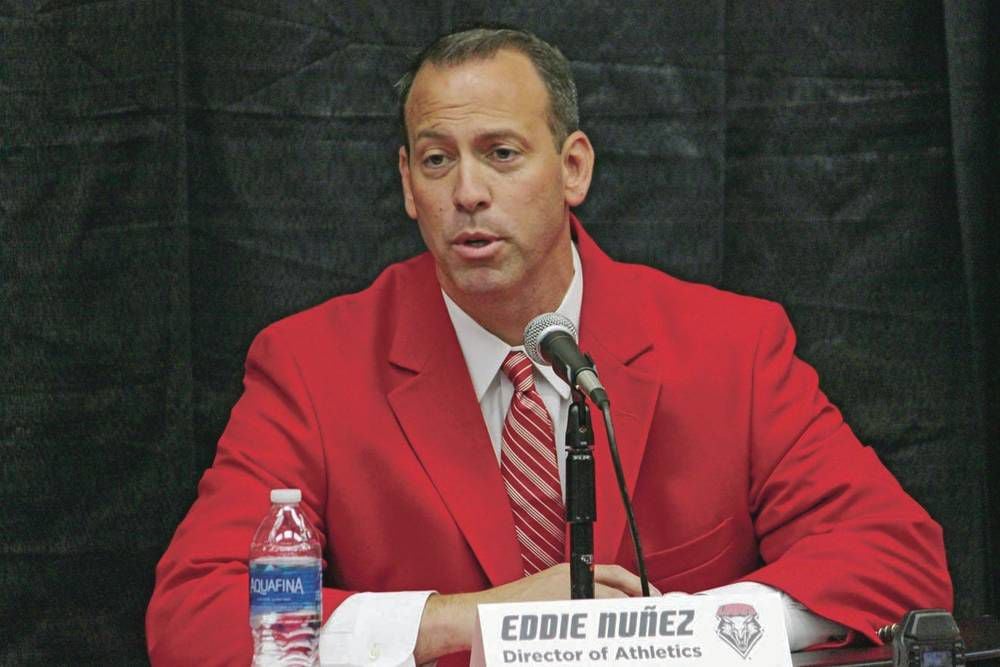 Athletic director Eddie Nuñez projects UNM could save $1.9 million by eliminating some sports programs. He has not publicly identified any cuts. Associated Press file photo 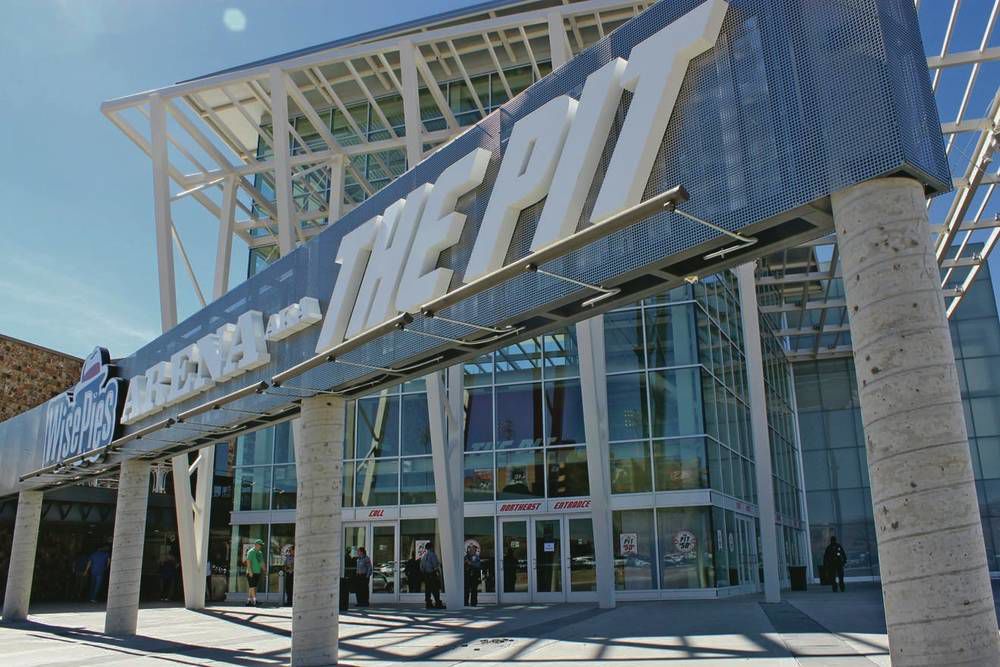 The Pit in Albuquerque in 2017 when it was named Wise Pies Arena.To raise revenue, the Athletics Department is looking at more uses for The Pit, but major concerts are out because the roof isn’t strong enough to support a sound equipment. Susan Montoya Bryan/Associated Press file photo 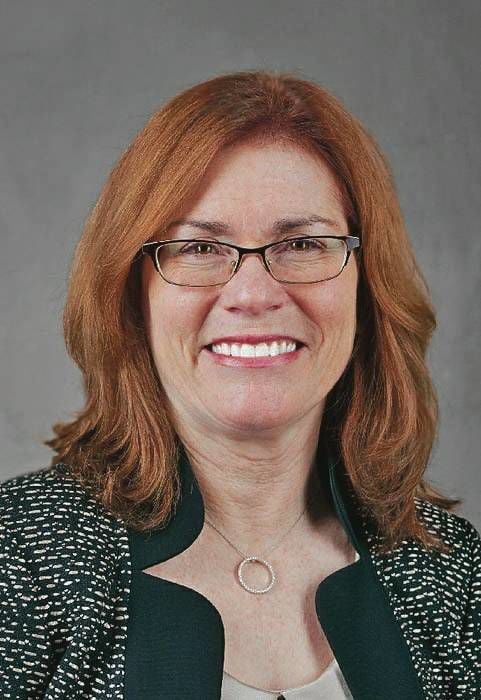 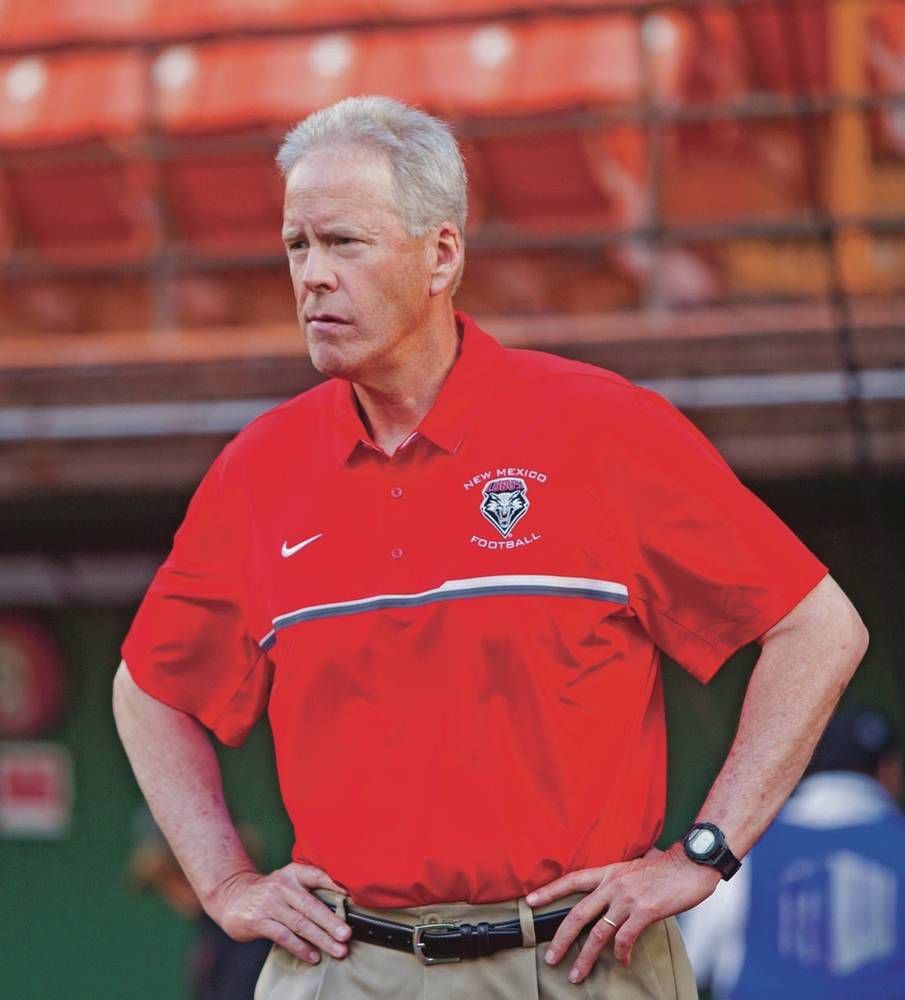 UNM coach Bob Davie in 2016 before a home game against Hawaii. UNM has projected a dip of $340,000 in revenue from the 2017 season because the annual Lobo-Aggie game is in Las Cruces and the bulk of Lobos home games are late in the season when the colder weather tends to affect turnout. Marco Garcia/Associated Press file photo

Lobos fans at a 2012 football game. The athletics department is battling a projected $7.8 million deficit because of declining revenue and rosy attendance projections that missed the mark.Will Webber/New Mexican file photo

Athletic director Eddie Nuñez projects UNM could save $1.9 million by eliminating some sports programs. He has not publicly identified any cuts. Associated Press file photo

The Pit in Albuquerque in 2017 when it was named Wise Pies Arena.To raise revenue, the Athletics Department is looking at more uses for The Pit, but major concerts are out because the roof isn’t strong enough to support a sound equipment. Susan Montoya Bryan/Associated Press file photo

UNM coach Bob Davie in 2016 before a home game against Hawaii. UNM has projected a dip of $340,000 in revenue from the 2017 season because the annual Lobo-Aggie game is in Las Cruces and the bulk of Lobos home games are late in the season when the colder weather tends to affect turnout. Marco Garcia/Associated Press file photo

Despite an annual budget that tops more than $32 million — a figure approaching two times the amount of its downstate rival at New Mexico State — The University of New Mexico’s athletics department is having a nearly impossible time making ends meet.

Now under the microscope of the university’s board of regents as well as an increasingly impatient public, the department is facing the very real possibility of eliminating programs to help pay down an operating deficit estimated to reach $7.8 million by the end of the current fiscal year.

The board of regents is expected to, in some capacity, approve the department’s budget for the upcoming fiscal year at Tuesday’s meeting and send it to state leaders for approval later this month. Before then, the wheels were set in motion for sweeping changes in athletics that call for drastic cost-cutting measures.

Last week, recently hired UNM President Garnett S. Stokes authorized athletics director Eddie Nuñez to cut an unspecified number of sports teams to get the overspending and failed budget projections under control. She made the announcement at the monthly regents’ Facilities and Finance Committee meeting, saying the school was better off supporting fewer sports and doing it well than continuing to stretch itself too thin.

“I was well aware coming into this position that the athletics budget had been a fighting challenge for UNM for many years and that the inability to resolve the deficit had led us to the unfortunate position of having our athletics department under the scrutiny of [the state’s Higher Education Department] in the form of an enhanced fiscal watch,” Stokes said. “It has also led to a widespread loss of trust in the university’s leadership.”

Nuñez took the first step by projecting a

$1.9 million savings through the elimination of programs. He did not identify which sports would be cut, but it’s clear that multiple Olympic-style teams could be affected.

Stokes set a July 1 deadline for announcing what programs would end, and said those athletes would then have one final season to represent the school during the 2018-19 year.

Nuñez said no one is safe from scrutiny, not even the potential big-money sports of football and men’s and women’s basketball, although it appears those programs are too big to be eliminated. Women’s hoops was the only sport in the current fiscal year to finish in the black, thanks to a fast start that had the Lobos flirting with a Top 25 ranking and attendance at games shooting well above preseason ticket projections.

The rumor mill has been in full swing on radio talk shows and social media. The easy targets are the men’s and women’s skiing programs, which were axed last year but resurrected after an ambitious plan to save them was spearheaded by boosters and student-athletes.

Other sports suggested to be cut by fans have included indoor and outdoor track and field, beach volleyball, women’s swimming, golf, softball, tennis and men’s soccer.

Because the Mountain West Conference does not play men’s soccer, UNM is a member of the far-flung Conference USA, and the team’s travel expenses are significantly larger, by proportion, than other Lobo programs.

Cutting sports teams has become a routine cost-saving measure for colleges across the country. The simple solution is to ax nonrevenue Olympic sports, where expenses far outweigh any financial gains.

80 student-athletes. It will also lay off a number of people within the athletics department.

Most cuts are seen at smaller Division I schools or lower-level NCAA programs, but occasionally they do happen at marquee powerhouse universities, like Maryland, which eliminated seven sports in 2012 — two years before it joined the Big Ten Conference. The driving force is revenue, and nothing drives the bottom line quite like football and men’s basketball. It has been reported that football heavyweight Alabama has had more annual revenue the last few years than every team in the National Hockey League.

UNM has followed a national trend in recent years with declining attendance in both football and men’s basketball. The football team drew sparse crowds while riding a seven-game losing streak to end last season, and the basketball team had its lowest average attendance since The Pit opened more than half a century ago.

Nationally, the 129 teams in the Football Bowl Subdivision this past season saw the biggest attendance drop since 1982 with an average of 1,409 fewer fans per game. Average attendance has dropped four straight years, and entering next season, UNM is forecasting further decreases in ticket sales for head coach Bob Davie’s program.

The school has projected a dip of $340,000 from the 2017 season, a figure attributed to two main factors: The annual Lobo-Aggie game is in Las Cruces and the bulk of the home games come late in the season when the colder weather tends to affect turnout.

Nuñez said the department’s negative coverage in the media also has a negative impact.

“Since I’ve arrived, one of the things that I realized, and I think everybody has, is there’s a lack of trust within our department, and a lot of our donors have expressed that discontent by not purchasing tickets,” he said.

Cutting costs is nothing new, not even within the state. New Mexico State recently had to cut more than $400,000 to balance its athletics budget after overestimating ticket sale projections.

Stokes said she convened a meeting with the university’s top financial advisers to form a plan to deal with UNM’s growing athletics debt. Once the controls fall to Nuñez, it becomes his job to improve the financial picture by controlling spending and setting reasonable financial projection goals.

“Balancing this budget will not be possible without making some extremely tough decisions,” Stokes said.

That’s where the elimination of sports becomes a vital piece to survival.

“I do not believe it is realistic at this time to expect our athletics department to be fully self-sustaining without institutional support,” Stokes said. “My goal in the long run is to have athletics earn the respect and support of our faculty, staff and students, and the community in ways that will eventually benefit its financial picture.”

The contract, which expires in 2020, calls for about $5 million to be paid to the school. Nuñez has adjusted the next two years’ budgets to collect $6.625 million, a boost of about $800,000, and said the plan is to find a more favorable partnership with either Learfield or another company within the next two years.

Other ways to generate revenue include the use of facilities for non-UNM events. That means rolling out the welcome wagon for events that bolster existing contracts for things like the annual high school basketball state tournaments and the Ty Murray Invitational bull riding event in The Pit, as well as the state baseball tournament at Santa Ana Star Field and the Easter sunrise service at Dreamstyle Stadium.

“Every facility of ours is on the table for an opportunity to be rented, used,” Nuñez said.

He has charged assistant athletic director Mike Haggerty with finding additional opportunities, ranging from concerts to other social events. The Pit is a popular choice, but Nuñez said the arena’s roof isn’t strong enough to support the sound equipment required for major concerts, and the facility’s floor plan is too small to accommodate the return of the NCAA men’s basketball tournament.

A new sound system will be installed in The Pit this summer but that, alone, is not enough to get major concerts in there.

“One of the focuses since I’ve arrived is trying to maximize our efforts with our facilities and trying to come up with a plan,” Nuñez said. “I’ve met with at least half a dozen promoters, not just in the Albuquerque area, [but] from out of state looking for venues.”

Regent Thomas Clifford suggested freezing personnel vacancies in the department, a move that would save hundreds of thousands of dollars in salary and benefits. More than $14 million of the annual budget goes toward payroll, and Nuñez said there are currently 12 openings.

“It’s mainly a revenue problem that we’re looking at in this budget,” Clifford said. “It’s within 5 percent of the original budget. It’s an enterprise. It’s not that predictable, so, you know, there’s been an awful lot of hysteria about this budget that’s been published and spoken, and I don’t think it’s that bad.”