UNM wide receiver Andrew Erickson is tacked by Utah State safety Jared Reed, left, and cornerback Cam Lampkin on Thursday in Logan, Utah. The Lobos struggled in the second half and were hammered 41-27 by the Aggies. 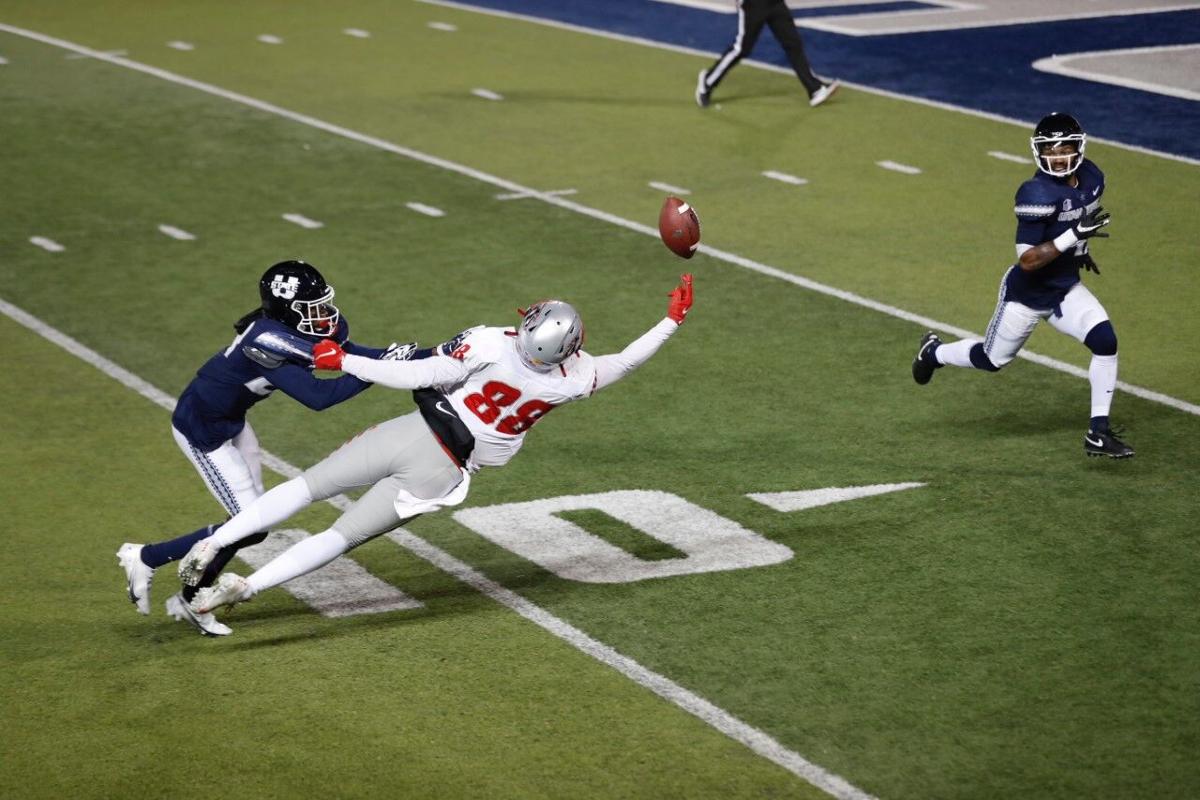 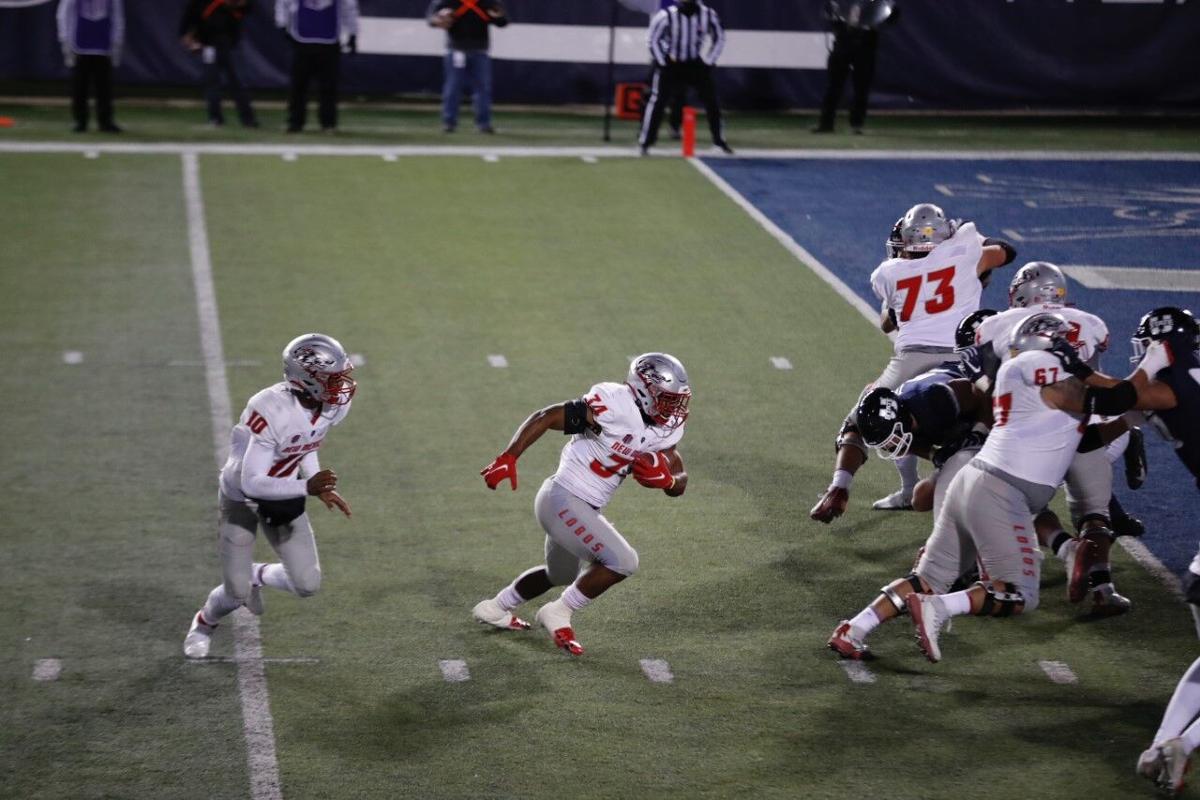 UNMrunning back Bobby Cole (34) rushes for a 1-yard touchdown Thursday against Utah State in Logan Utah. The Lobos lead 13-6 at the half but fell apart in the third quarter. 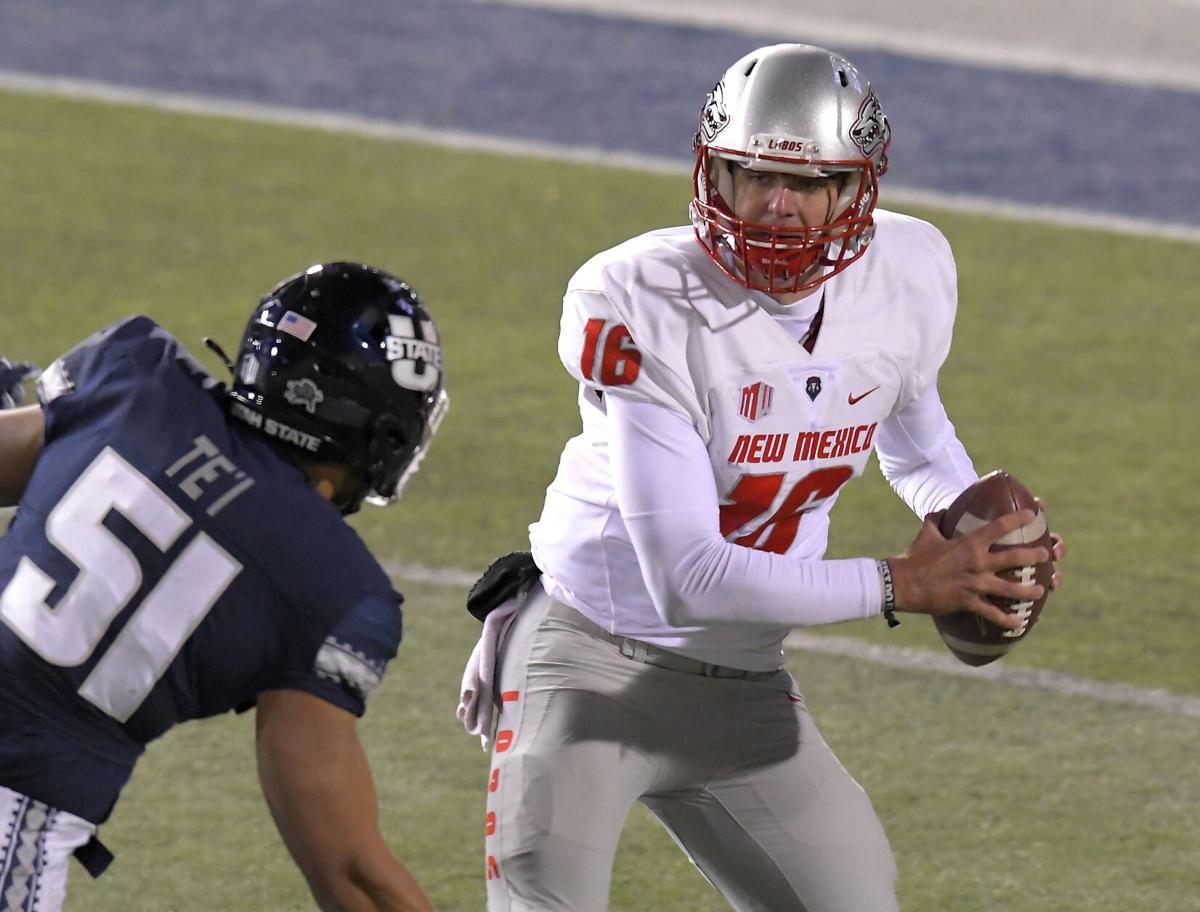 UNM's third-string quarterback Connor Genal took some hits against Utah State on Thursday in Logan, Utah, but was able to to lead two touchdown drives in the 41-27 loss.

UNM wide receiver Andrew Erickson is tacked by Utah State safety Jared Reed, left, and cornerback Cam Lampkin on Thursday in Logan, Utah. The Lobos struggled in the second half and were hammered 41-27 by the Aggies.

UNMrunning back Bobby Cole (34) rushes for a 1-yard touchdown Thursday against Utah State in Logan Utah. The Lobos lead 13-6 at the half but fell apart in the third quarter.

UNM's third-string quarterback Connor Genal took some hits against Utah State on Thursday in Logan, Utah, but was able to to lead two touchdown drives in the 41-27 loss.

The Lobos are going have to wait a little longer to become the coffee bean.

After a visit this week from noted motivational speaker Damon West — he of a popular transformative fable and its message of taking something small and fermenting it into something stronger, much like a coffee bean does when placed in hot water — the University of New Mexico football team went into a Thanksgiving night game at Utah State hoping to end a pair of the worst losing skids in school history.

Their fermentation will take more time, more effort and a lot more work.

“In my honest opinion, we’re a terrible football team,” said Lobos coach Danny Gonzales after his team, now 0-5, was beaten 41-27.

UNM was once again out of its element in the third quarter, giving up 28 unanswered points in the span of just seven minutes. The collapse came after they built a 13-6 halftime lead. It extends the Lobos’ losing streak to 14 and pushes their skid in Mountain West games to an even 20.

Adding insult to injury was another vicious beating suffered by UNM’s quarterbacks. Thrust into the starting role for the third straight game, backup Trae Hall played most of the night with a scraped and bloody hand after a first quarter hit, then left in the third quarter in favor of third-stringer Connor Genal.

Playing his first game since his senior year in high school two years ago, Genal was blasted on a huge hit by Utah State’s Dominic Tatum. Tatum was ejected for targeting, but Genal bounced right back and was part of two touchdown drives that kept the Lobos in the game until the waning moments.

Genal said he felt the nerves when called into action after Hall suffered a rib injury, then definitely felt the sting after Tatum’s hit. Genal said the Lobos’ biggest issue is being able to withstand a punch to the mouth to start the second half of games.

In five games this season they’ve led at the half three times but have been outscored 62-21 in the third quarter. Opponents have scored on 10 of 19 drives against UNM’s defense, including eight touchdowns. Half of those came Thursday when the Aggies turned a seven-point deficit into a 34-13 lead.

Case in point, Utah State going 61 yards in five plays to tie the game to open the second half.

Kina Maile recovered Hall’s fumble and returned it 16 yards for another touchdown.

“Coach G, he had said, like, some dudes are afraid to win it seems like,” UNM defensive back Tavian Combs said. “It’s just a bad mojo. Some kids want to win. You can see some kids putting their all out there and you see some kids are just playing for them, and I feel like it’s hurting our team.”

Combs had seven tackles and a forced fumble, but the UNM defense simply had no answer for Peasley.

He passed for 239 yards and three touchdowns and rushed for 120 and another score. His 62-yard touchdown run late in the fourth quarter was the death blow and, as Gonzales pointed out, was just another example of how one missed play proves so costly.

Peasley looked like he was about to be dropped for an 8-yard sack on third down but escaped an ankle tackle by Lobos linebacker Kameron Miller before scrambling away for his long run.

Missed tackles, botched assignments, lack of execution — it’s all adding up to a losing streak everyone’s getting tired of talking about.

“It makes me mad,” Genal said, referencing his coach’s statement that the Lobos are simply a bad football team.

“He has a point, though. I hate losing but right now that’s all we seem to be doing.”

NOTES: The Lobos are scheduled to face Wyoming on Dec. 5 and Fresno State on Dec. 12 to close out the season. Both games will be played in Las Vegas, Nev., at Sam Boyd Stadium — the site of UNM’s last win in conference play more than two years ago. ... Gonzales said Hall was examined in the medical tent on UNM’s sideline after his rib injury but didn’t have any updates on his quarterback’s condition. Both Hall and Genal shared snaps with the first team during practice leading into Thursday’s game and Genal is capable of taking over the starting role for the Wyoming game if need be. ... UNM’s longest passing play was 28 yards by running back Bryson Carroll when he tossed his second touchdown pass of the season, a trick play that went to Andrew Erickson late in the third quarter.