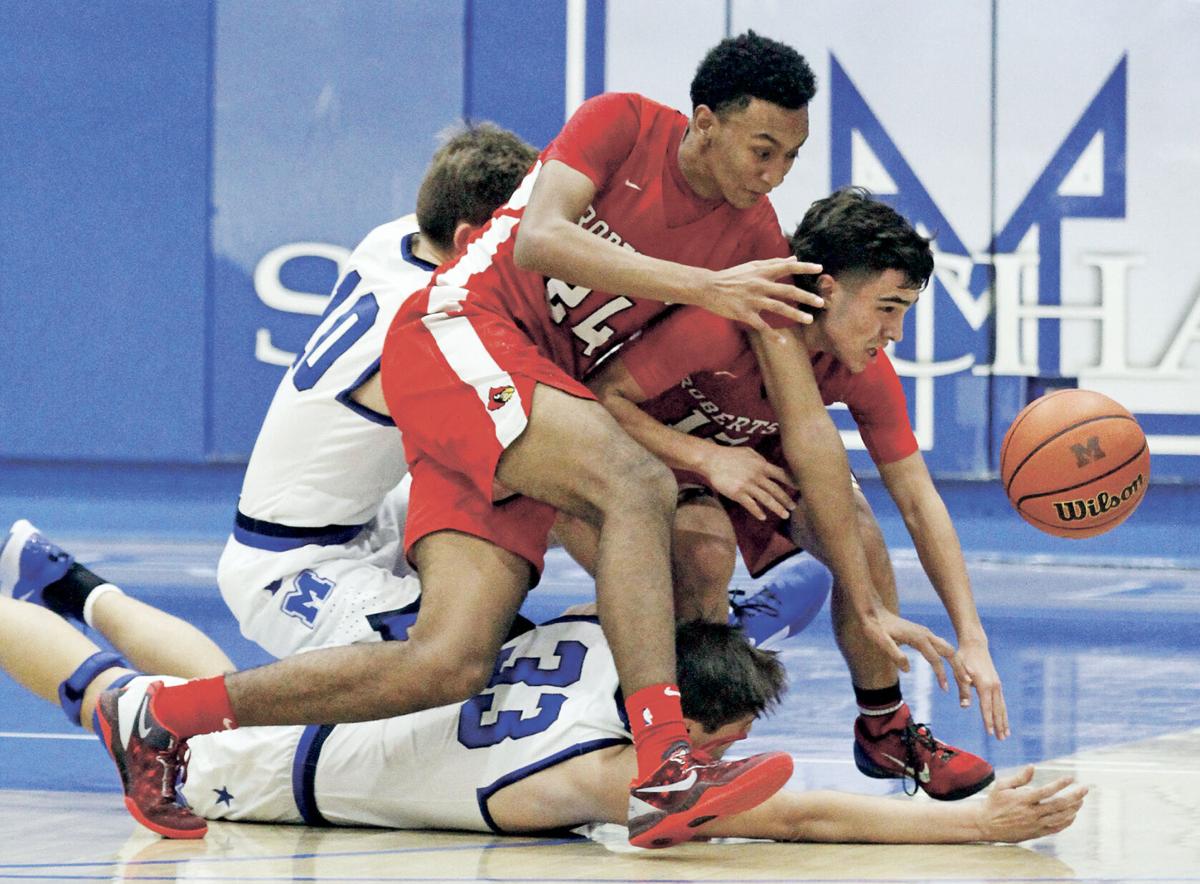 Robertson’s Julius Vaughn, front, and Mathew Gonzales battle St. Michael’s Devin Flores for a loose ball during a 2020 game at Perez-Shelley Gymnasium. No. 1 Robertson plays No. 8 Cobre in a state quarterfinal at 4 p.m. Monday in Socorro. No. 5 St. Michael’s plays No. 4 Sandia Prep at 6 p.m. Monday at Sandia Prep.

Robertson’s Julius Vaughn, front, and Mathew Gonzales battle St. Michael’s Devin Flores for a loose ball during a 2020 game at Perez-Shelley Gymnasium. No. 1 Robertson plays No. 8 Cobre in a state quarterfinal at 4 p.m. Monday in Socorro. No. 5 St. Michael’s plays No. 4 Sandia Prep at 6 p.m. Monday at Sandia Prep.

It sure feels like déjà vu for Ralph Casaus.

The boys basketball coach at Monte del Sol sees plenty of parallels between the Dragons team he leads into Monday’s Class 2A quarterfinal game against Rehoboth Christian and the 2007-08 team that almost pulled off a shocking upset.

Back then, seventh-seeded Monte del Sol went into the Santa Ana Star Center and had No. 2 Texico on the ropes, leading 61-59 with two minutes left in the game before losing 64-61. This time, the Dragons are the eighth seed and taking on the No. 1 Lynx at 5 p.m. Monday.

It’s more than just being the heavy underdog against a vaunted foe. Both teams needed some help to get into the postseason.

Twelve years ago, the Dragons won six straight games before losing to the Wolverines, then needed to beat Santa Fe Prep in the District 4-2A semifinal to get into the state tournament.

This year, Monte del Sol benefited from District 2-2A leader Estancia’s halt to the 2020-21 season because of a positive COVID-19 case that allowed the Dragons to win the district title after beating Albuquerque Menaul 52-48 on April 29.

It wasn’t the way Casaus wanted to punch his team’s ticket into the postseason.

“We wanted that rematch with Estancia. We really did want the rematch,” Casaus said. “We really believe we belong there [with the Bears]. We should be where they’re at.”

One thing that makes this team different, Casaus said, is the work the group puts in during practice. He said the team is committed to playing tough, hard defense, and if the Dragons could practice seven days a week, they would.

“Their work ethic is through the roof,” Casaus said. “That is why our defense has come along now.”

State hoops, by the numbers:

$500,000 — As in, the low-end estimate in lost revenue from the cancellation of last year’s state tournament and other spring sports, plus the chronically delayed and fan-restricted prep sports season.

199.4 — In miles, the distance Robertson’s boys basketball team must travel each way to play Monday’s Class 3A quarterfinal against Cobre, a game hosted at Socorro High School to limit travel time for each team. That’s actually a longer trip for the top-seeded Cardinals than the Indians (151 miles). They’re one of two No. 1 seeds not able to play at home; the Portales girls will “host” Silver in the 4A opener on Tuesday in Ruidoso.

4:30 p.m. — The time for tipoff of Tuesday’s Class 5A girls quarterfinal between No. 4 Los Lunas and No. 5 Cleveland. As the higher seed, Los Lunas should have home court advantage, but the game has been moved to Cleveland (in Rio Rancho) because Valencia County is coded as yellow in the state’s COVID-19 risk system and cannot allow fans at indoor sporting events.

98 — The number of wins by the Hobbs girls basketball team the past four seasons, the most of any boys or girls team in the state in that span.

78 — Scoring average of Navajo Prep’s girls, the top seed in Class 3A. That’s the most prolific offense of any girls team in the state.

77 — Tre Watson’s height, in inches. Or so we think. The Cleveland senior will be an imposing force when he leads the Storm against Santa Fe High in Tuesday’s opening round of the Class 5A boys’ draw. On the Storm’s MaxPreps page he’s listed as 6-foot-7, but on its football page it says he’s 6-3. We’ll split the difference and go with Fresno State’s measurement of 6-5. A tight end, Watson will play for the Bulldogs’ football team this fall.

67 — Height, in inches, of Robertson point guard Mathew Gonzales, a 5-7 senior who sports perhaps the best mullet of anyone this side of Billy Ray Cyrus.

49 — The average margin of victory this season by Magdalena’s boys. Unbeaten in 12 games, the Steers are the top seed in Class 1A and will face Pine Hill, a team riding a nine-game losing streak after going 1-10 in the regular season but still qualified for the tournament by winning District 1-1A. Good luck with that one, Pine Hill.

17.2 — Points per game surrendered by the undefeated Academy for Technology and the Classics girls, who will make their postseason debut Monday afternoon against Lordsburg at a neutral site in Hatch.

15 — The most possible wins any boys or girls team can have this season, marking the lowest overall win total of a state champion since 2001 for the boys (Portales went 15-12 in winning the 3A title). No girls champion has ever won fewer than 17 games. Welcome to the pandemic, folks.

13 — The number of consecutive years a private school has reached the state finals in what is now boys Class 3A. Not since Pojoaque beat West Las Vegas in 2008 have we had two public schools in the title game. In fact, Hot Springs (2019) is the only public school to win the championship in all that time.

0 — Number of home games for Santa Fe teams in the opening round. The city will send four teams (the ATC girls, plus boys teams from Santa Fe High, St. Michael’s and Monte del Sol) to state, but each of them is seeded fifth or lower and none of them — not even No. 5 St. Michael’s since their potential matchup with Cobre in the semifinals would be at a neutral site — would get a home date after the first round.

As one streak continues, another comes to an end. When the Santa Fe High boys basketball team earned the eighth seed in the Class 5A bracket, it extended the program’s run of state tournament appearances to six consecutive years. That is the longest run for the program since the Demons made it to state from 1977-80.

Meanwhile, crosstown rival Capital saw a 20-year run of appearing in the state tournament come to an end after finishing the season 7-3 and finishing third in District 5-5A. To put that into context, Jaguars assistant coach Bryan Mirabal was a freshman in the program the last time Capital didn’t play in the postseason.

At the same time Heather Dyche was coaching the University of New Mexico women’s soccer team in its second-round NCAA Tournament game against TCU on Thursday, another Dyche was making her own mark on Albuquerque’s sports scene.

Nikki Dyche, the niece of UNM’s soccer boss, started at shortstop for Eldorado’s C-team in a game at Volcano Vista. Dyche reached base twice and was in on a few defensive plays in the Eagles’ season-opening 10-3 loss to the Hawks.

A standout athlete in her own time at Eldorado, Heather Dyche never tried her hand at the Eagles’ baseball team. She parlayed her time as an all-state soccer and basketball star into a scholarship to Nebraska.

Not a word about St. Mikes. The last I knew SM was located in SF. Too busy writing articles about UNM and now, major league baseball I guess.

Mr. Romero, they did have a picture of SM and stated that SM plays Monday. But, I agree with you! It’s crazy that Monte Del Sol & Cleveland, and a player from Cleveland dominate the article. St. M is in the big dance again. We want data, statistics, analytics, and stories about our kids & teams perseverance in the strangest times of recent history! Not short stories about arbitrary #’s. It’s really not a sports page that predicts games, gives matchup stories, post brackets, and celebrates our local kids. It’s staff that is interviewing through their sort story columns in hopes to land a job with a bigger paper. They will definitely post a picture of the agony of defeat (our kids crying after a loss) instead of great action picture of our kids in a battle giving their all.