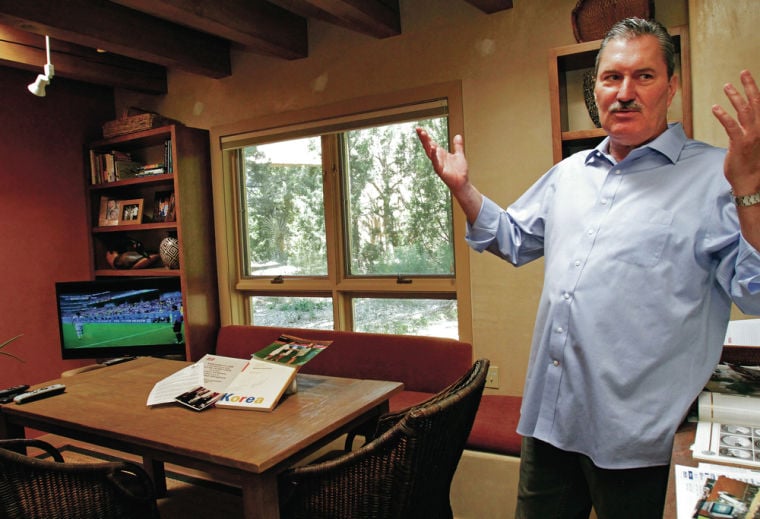 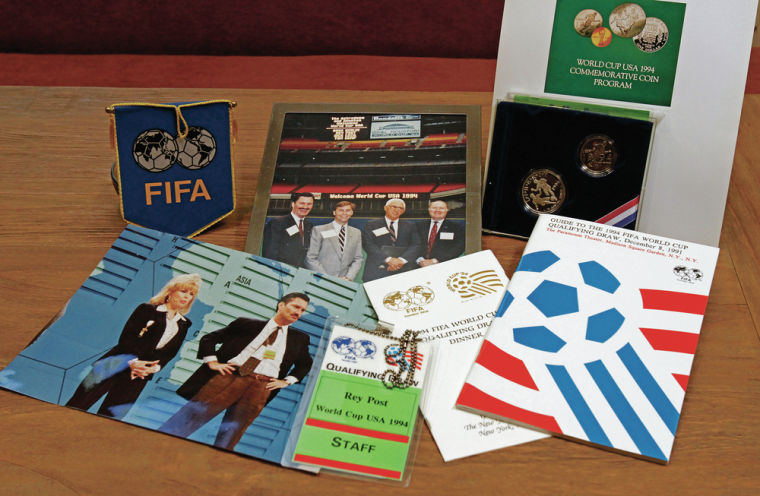 A portion of Rey Post’s collection of memorabilia for the many World Cups he participated in. Jane Phillips/The New Mexican 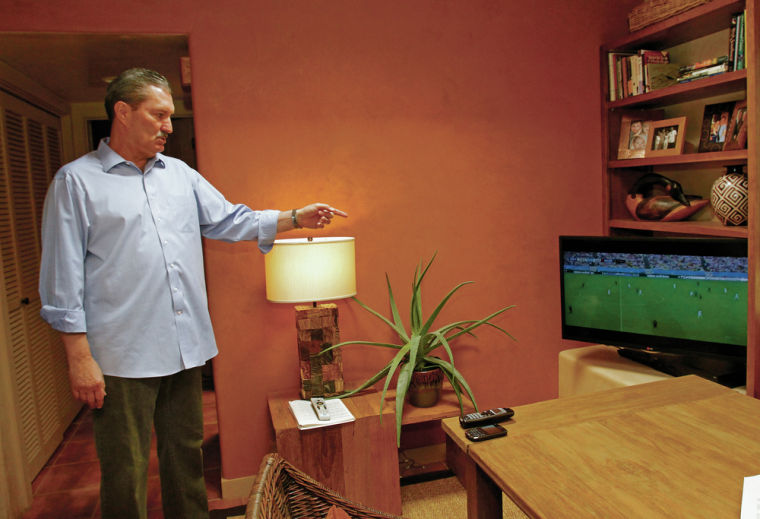 A portion of Rey Post’s collection of memorabilia for the many World Cups he participated in. Jane Phillips/The New Mexican

On the day the United States commemorates its birth as a nation, Rey Post celebrates the re-birth of soccer within its borders.

While it doesn’t have the same impact of Independence Day, the date of July 4, 1988,will ring in Post’s mind as the day soccer in the U.S. started its comeback.

Post, now an associate broker at Sotheby’s International Realty, was the project manager of the successful U.S. campaign to be host to the 1994 FIFA World Cup, and he directed another successful campaign that brought the Women’s World Cup to the country in 1999.

What sprouted from that effort to bring soccer into the mainstream consciousness in this country is bearing more fruit than ever before. It shows in the crowds of tens of thousands who attend World Cup viewing events of the United States National Soccer Team’s matches in major U.S. cities — or even a couple of hundred who congregated to the Railyard Plaza for the U.S.-Ghana match on June 16 — and the crowded bars and restaurants who watched intently over the past two weeks as the U.S. advanced to the knockout rounds of soccer’s most prestigious event.

Post, though, enjoys the scene from the quiet comfort of his home in Tesuque, and it’s been a treat to watch.

“Today, I’m nothing more than a soccer fan,” Post said. “I had an exciting adventure for over a decade doing those World Cup campaigns. Now, I’m sitting back, watching ESPN and the broadcast of these games. I have to say, I am astounded and pleasantly surprised at how far soccer in the United States has come since we launched that campaign to bring the World Cup here.”

Soccer in the U.S. during the mid-1980s didn’t even register a blip on the radar screen of interest. Sure, Pelé gave the sport a temporary shot in the arm when he played in the now-defunct North American Soccer League in the mid-1970s, but it was a passing fancy.

When the U.S. Soccer Federation made a bold move to bid for the World Cup in 1987, the country had not qualified to play in the event since 1950. The federation had to overcome an image problem from within the country and throughout the world:

Why bring the World Cup to a country that had little, if any, interest in the sport?

Enter Post and his role in image making. He was primarily a political campaign manager before joining Eddie Mahe and Associates, adding that he had just come off running the only losing campaign in his career in Richard Snelling’s bid for the U.S. Senate seat in Vermont. Post didn’t have any attachment to soccer other than playing it as a youth.

“They approached me with it, saying it was one of the more high-profile campaigns,” Post said. “They asked me to take it on.”

Instead of trying to answer the question head-on, the firm elected to highlight the strong economic infrastructure of the U.S., the strength of four major networks for coverage, as well as the ability to hold games in already-completed stadiums. Post added that the group’s presentation also focused on growing youth soccer leagues that were taking hold across the country and the potential that could come from them.

“We had to create the story line and show the world that there was incredible enthusiasm here,” Post said. “There were burgeoning players out there, and their moms and the dads were enthusiastic about the sport. That’s why we constantly emphasized our plan of growing a grassroots initiative to show the world and FIFA that there were millions of people with the enthusiasm to host this event.”

In the end, the U.S. competed with Morocco and, ironically, Brazil for the bid. If anything foretold the country who was going to get the bid, it was the decision by FIFA to hold final presentations for its selection on July 4, 1988. It was the beginning of soccer’s resurgence in the U.S.

“We didn’t want to read too much into it,” Post said. “But, gosh, if there was ever a signal that maybe this was going to work out, that was it.”

When the U.S. won the bid, Post switched from presentation to execution mode. He was a part of the four-person team that selected the nine cities to host World Cup matches and executive produced the qualifying draw television event that mapped out the path teams had to take to qualify for one of the 24 spots for the World Cup. Post also worked with the Treasury Department to mint commemorative coins in honor of the World Cup, which generated more than $44 million in sales.

Ultimately, those efforts helped produce one of the most successful World Cups, as the 1994 tournament still holds the record for the largest cumulative attendance at more than 3.5 million people and generated more than $350 million in revenue. About $60 million of profit from the 1994 World Cup went toward the U.S. Soccer Federation Foundation Inc., which is used to promote and support grassroots soccer initiatives.

“The United States maybe doesn’t have the rich soccer history that a lot of other countries have, but we do have a competitive spirit,” Post said. “No one can doubt our ability in staging major events.”

Post’s job led him to work with the Women’s World Cup bid in 1999, which brought another watershed moment for women’s soccer in the country. The success of both World Cups led to the formation of professional leagues in Major League Soccer, Women’s Professional Soccer (since defunct) and the National Women’s Soccer League.

While the U.S. showed it can host such a prestigious event, it also laid the foundation for an improved quality of soccer. When the U.S. team prepared for the 1994 event, so few players competed in Europe that the bulk of the national team practiced and played as a unit for four years. Contrast that to the 2014 squad, which has every single player on a professional team, whether it is in Europe, Mexico or the MLS.

“Quite frankly, the players, through the development of the U.S. Soccer Federation, have become so much better,” Post said. “There is an initiative to make our athletes world-class caliber, and that is huge. We’ve moved on [in World Cup play], and as our teams continue to do well and the players become fan-based inspirations for younger players, this sport is going to evolve.”

Another aspect in that evolution has been the changing demographics in the U.S. The influx of immigrants from Mexico and other Latin American countries also brought their passion for the sport, and Post saw that growing element first-hand during the 1994 World Cup.

The World Cup finals between Brazil and Italy in the Rose Bowl in Pasadena, Calif., attracted more than 94,000 people. Post said the Rose Bowl was the largest stadium in the country and the organizing committee as well as FIFA preferred it as the championship site. That Southern California had a distinct segment of the population with a love for soccer was just an added plus.

“That was certainly not lost on our organizing committee and the venue selection team, nor on FIFA,” Post said. “They wanted to make sure that stadium was filled with enthusiastic fans.”

Twenty years later, it’s a color-blind passion that is glued to the U.S. team’s progress in the World Cup. Post points to the television ratings of the U.S.-Portugal match on June 22 as proof that soccer has a strong foothold in the country. ESPN drew 18.22 million viewers, making it the most watched soccer match — and surpassing the mark that the U.S.-China women’s match in the 1999 World Cup finals — while another 6.5 million watched on Univision.

Thursday’s U.S.-Germany match saw 1.7 million concurrent viewers on ESPN’s online stream as many people couldn’t break away from work for the mid-morning event. That was hard to tell in Santa Fe, as The Junction Bar and Grill was filled to the brim with interested spectators, and every single TV had either the U.S.-Germany or the Ghana-Portugal battle as fans waited to see which countries would advance from Group G, the so-called ‘group of death.’

It’s a far cry from 20 years ago. Michael Walker, who runs a print shop in Santa Fe and was watching at Second Street Brewery, remembers living in Virginia Beach, Va., and struggling to find a bar or restaurant that would show any World Cup matches, much less any involving the U.S.

“There wasn’t a lot of interest in general,” Walker said. “It was hard to find a place that would do special events like that. I went just about everywhere.”

Even as interest for the U.S. team has grown, Chris Goblet, president of the Santa Fe Craft Brewers Guild who watched with Walker, said he’s seen more organized viewing groups for other countries over the past two weeks around the state then he remembers during previous World Cups.

“It’s 2 o’clock in the afternoon, and you’re seeing six people dressed up in Uruguay colors at Tractor Brewery in Albuquerque, and you know what’s going on,” Goblet said. “And there’s a guy representing Mexico and two people with Brazil jerseys on. It’s really easy to tell.”

Meanwhile, Post watched with the same excitement from the serenity of home. He flipped his TV set between the two matches and breathed easier when the U.S. advanced to the knockout round even after a 1-0 loss to Germany. When he learned there will be another viewing party in the Railyard Plaza for Tuesday’s Round of 16 battle between Belgium and the U.S., Post mused he might show up for that event.

If he chooses to stay at home, it would be appropriate. He left the 1994 Wold Cup championship early to stand in the Rose Bowl parking lot by himself and listen to the roaring crowd during the final moments.

“There was nobody out there but me and maybe a couple of groundskeepers,” Post said. “I had started this in the corner of my office in 1987 by myself, and I wanted to enjoy the last game at the Rose Bowl by myself, looking back at all of what we had done.”

What happened was the re-introduction of the U.S. to the rest of the soccer world.