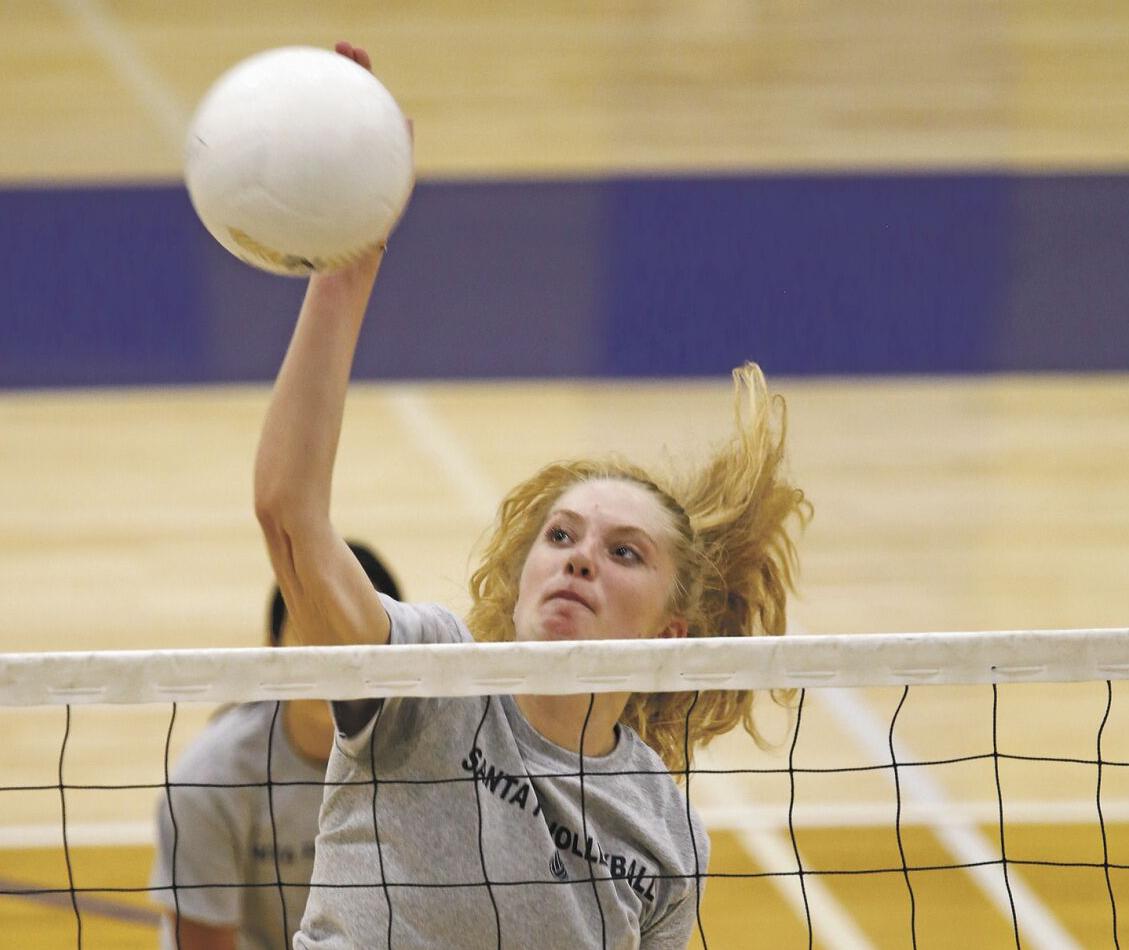 Santa Fe High’s Ainsley Reynolds-Smith spikes the ball during volleyball practice in 2018. The Demonettes will return to practice soon but are unlikely play many familiar opponents because several school districts opted not to return to action during the pandemic. 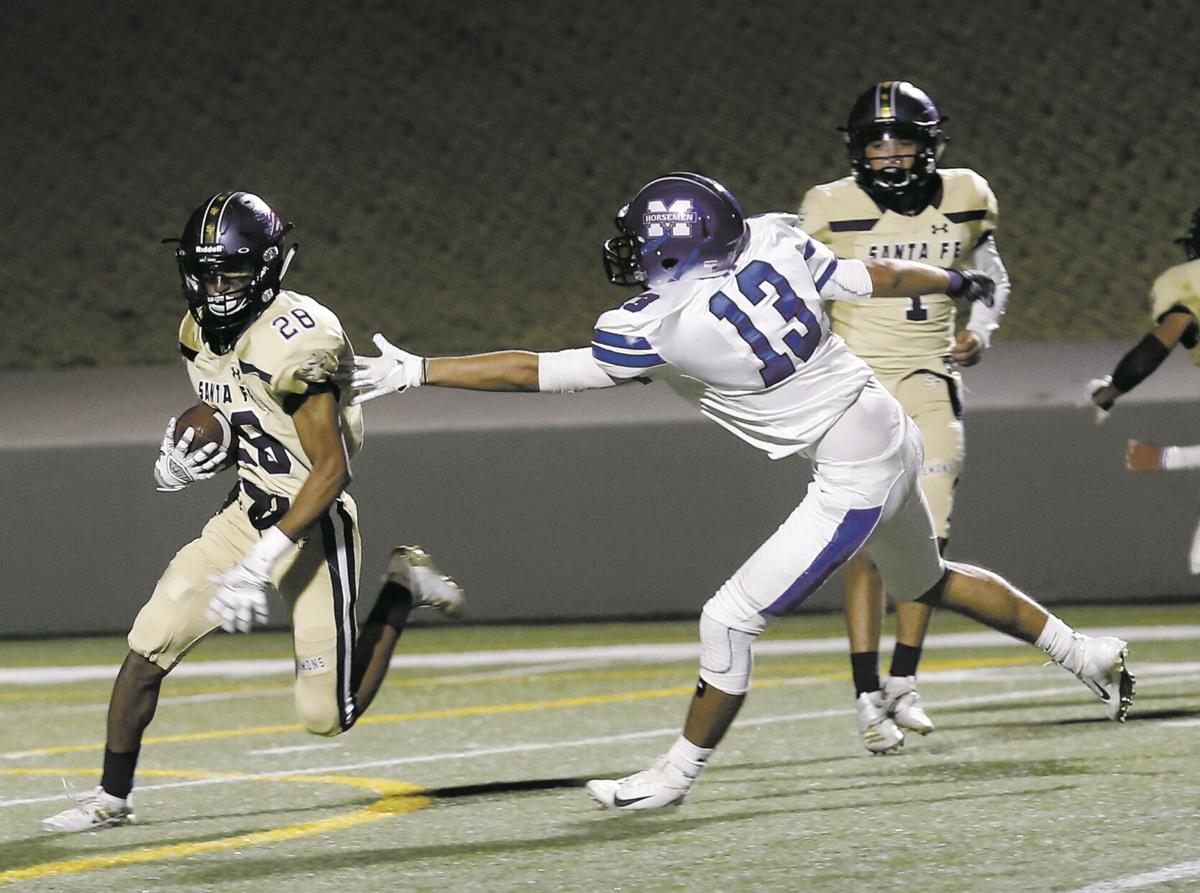 Santa Fe High’s Kevin Garcia eludes Horsemen defenders in 2019 at Ivan Head Stadium. The Horsemen won 32-28. The two rivals are unlikely to play this spring as some schools return to action during the pandemic. 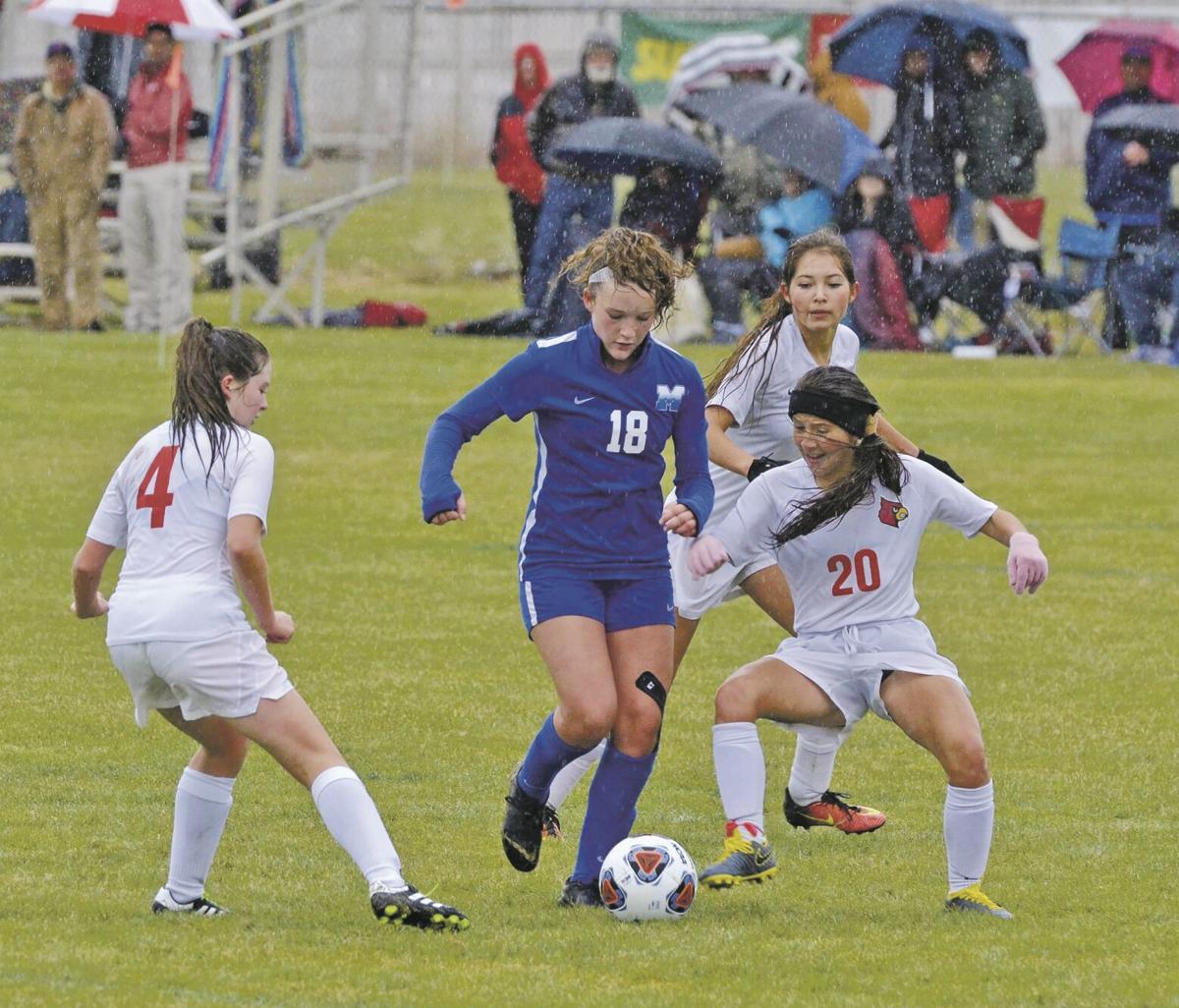 St. Michael’s Farrah Baker dribbles through a cluster of Robertson players in 2019 in the Class A-3A Girls State Soccer Tournament at the Bernalillo Soccer Complex. As only some schools are reopening during the pandemic, the Lady Horsemen will likely face new opponents this spring.

Santa Fe High’s Ainsley Reynolds-Smith spikes the ball during volleyball practice in 2018. The Demonettes will return to practice soon but are unlikely play many familiar opponents because several school districts opted not to return to action during the pandemic.

Santa Fe High’s Kevin Garcia eludes Horsemen defenders in 2019 at Ivan Head Stadium. The Horsemen won 32-28. The two rivals are unlikely to play this spring as some schools return to action during the pandemic.

St. Michael’s Farrah Baker dribbles through a cluster of Robertson players in 2019 in the Class A-3A Girls State Soccer Tournament at the Bernalillo Soccer Complex. As only some schools are reopening during the pandemic, the Lady Horsemen will likely face new opponents this spring.

No matter how you slice it, the next few months of high school sports will look and feel unlike anything anyone has ever experienced.

The majority of the fun starts Monday when schools choosing to welcome students back on campuses with a hybrid learning model can allow teams in the traditional fall sports of soccer, football, volleyball and cross-country to commence with preseason practices. Teams must navigate two weeks of limited workouts in a 4-to-1 pod ratio before getting cleared by the state for full-contact return in early March.

When competition finally does return, their immediate future will be greeted with temporary district realignments in most sports.

Santa Fe High and St. Michael’s are the schools most affected by the changes. Each saw at least half of their respective districts eliminated when rival schools opted out of fall sports.

A Class 6A school in football and 5A for other sports, Santa Fe High was hit hard by the exodus of Albuquerque Public Schools. The state’s largest school district with a dozen teams in the two highest classes, APS voted last week to remain in distance learning for the remainder of the 2020-21 academic calendar.

Earlier this month, both school districts in Las Vegas opted out, leaving Robertson and West Las Vegas out of the picture, along with Santa Fe Indian School after it announced in the fall that it would remain in distance learning for the 2020-21 school year.

Per the guidelines of the New Mexico’s Public Education Department, schools wishing to offer sports must provide hybrid learning to each of its students. The state governing body for interscholastic sports, the New Mexico Activities Association, gave its members until Feb. 15 to decide if they were going to opt in for fall sports.

While sources say APS intends to file an injunction this week to allow its athletes to compete without a hybrid model in place, the possibility of Albuquerque teams opting out creates a seismic shift in football. It leaves Santa Fe High alone with Clovis in a District 2/5-6A alignment that includes five Albuquerque teams.

The NMAA acknowledged last week that it will realign districts to best fit the remaining teams. The state will be divided into regions and schools of roughly the same size will be given temporary status as district rivals.

APS teams make up 10 of the 20 spots in 6A, meaning a regional model would potentially leave the Demons in a district with Rio Rancho, Cleveland and Clovis — three of the state’s premier big-school football programs. If APS is allowed to compete outside the hybrid model, sources familiar with the process say it’s likely their teams would create an Albuquerque-based alignments that wouldn’t disrupt the NMAA’s temporary districts.

Sources have said that the NMAA’s new-look districts will use a commonsense approach and aim to strike a competitive balance by blending districts with enrollments that are similar but not necessarily in the same classification. In other words, it’s possible to see some Class 2A schools rolled into districts with 3A schools, 3A into 4A, and so on.

The key component is safety. The NMAA has prohibited overnight road trips and multiteam tournaments like Santa Fe’s popular volleyball Tournament of Champions. Neutral sites will likely be used for schools several hours apart and nondistrict games will be scheduled against teams from within a school’s region.

Chavez said SFPS had already begun building its district schedules for volleyball, soccer and cross-country and all that’s left for nondistrict slates are one or two slots. The NMAA is handling schedules for football.

“The thing is, it’s a unique year, and because it’s like that, we don’t have a lot of time to spread out games,” Chavez said. “We may only supplement our district schedule with two or three more games. There’s not a lot of wiggle room. Depending on what dates are available and what prescheduling has already been done, there is a likelihood we don’t play some of the teams we typically do.”

It’s possible that Capital and Santa Fe will remain district rivals in all four fall sports while St. Michael’s will find itself alongside a mix of schools like Sandia Prep, Bosque, Rehoboth, Cuba, East Mountain, Mesa Vista, Raton and Mora. Depending on the sport, St. Michael’s athletic director Kevin Garcia said Saturday that the Horsemen’s district alignment will look unlike anything fans have grown accustomed to in recent years.

The earliest any team in Santa Fe will play a football game will be March 12 because teams aren’t allowed to hold full practices until the end of the two-week probationary period. Teams will need an additional week to get players acclimated to full contact in pads.

Other sports can start scheduling games and matches the week of March 8.

A number of schools in and around Santa Fe have already announced they will not compete in fall sports now, including Pojoaque Valley, both Las Vegas school and Coronado. Santa Fe’s Monte del Sol will hold a board meeting Wednesday to make its decision.

The NMAA has created temporary districts for teams returning to sports in volleyball, football, soccer and cross-country. A sampling of what those alignments will look like. Note: Districts in football will be announced this week.

(all sports except football)

(all sports except football)