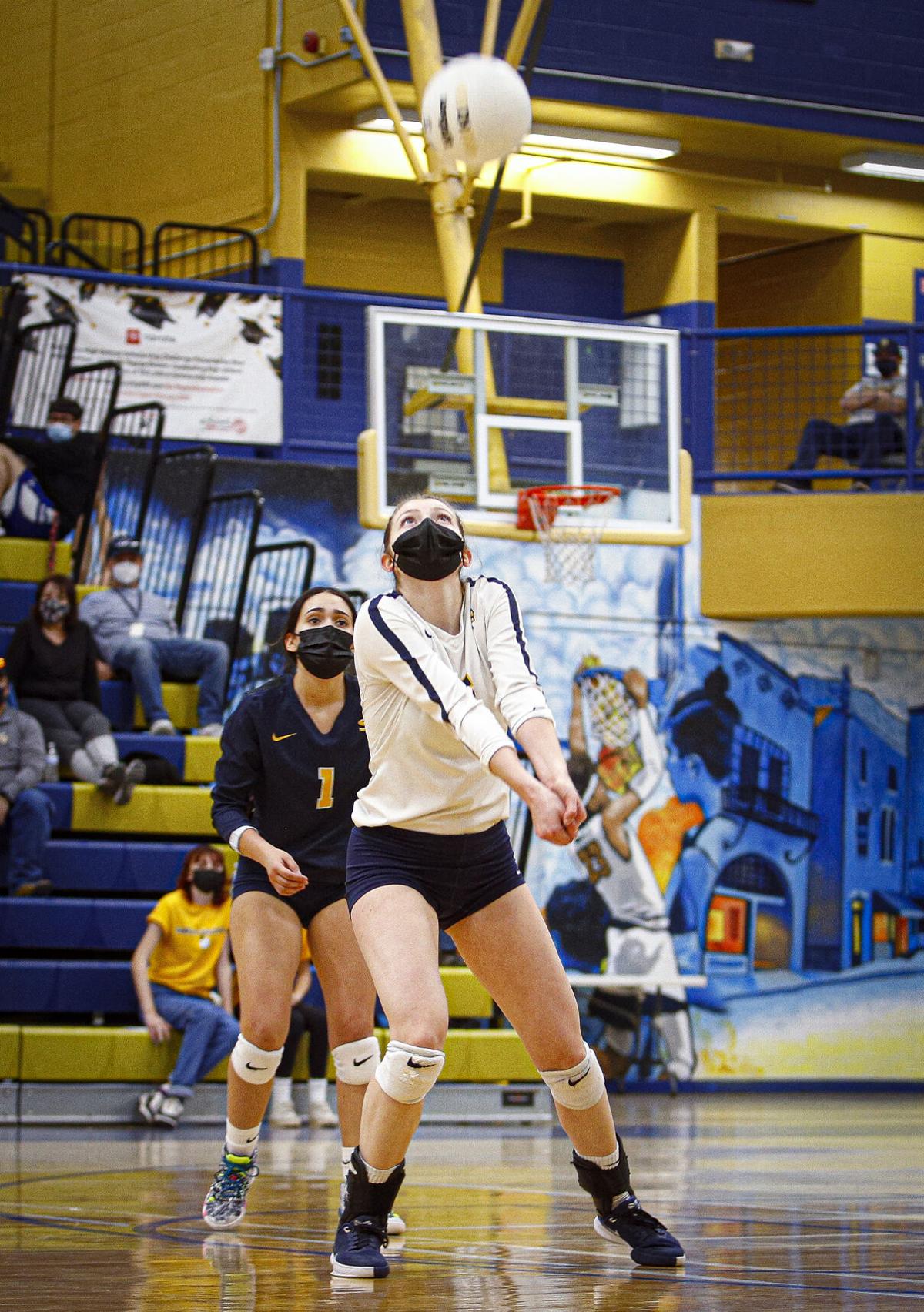 Demons outside hitter Laila Bernardino, preparing to hit the ball Thursday against Cleveland in Toby Roybal Memorial Gymnasium, says of the team chemistry: ‘It’s a belief we have in each other. We just know we’re going to accomplish our goals if we all work together.’ 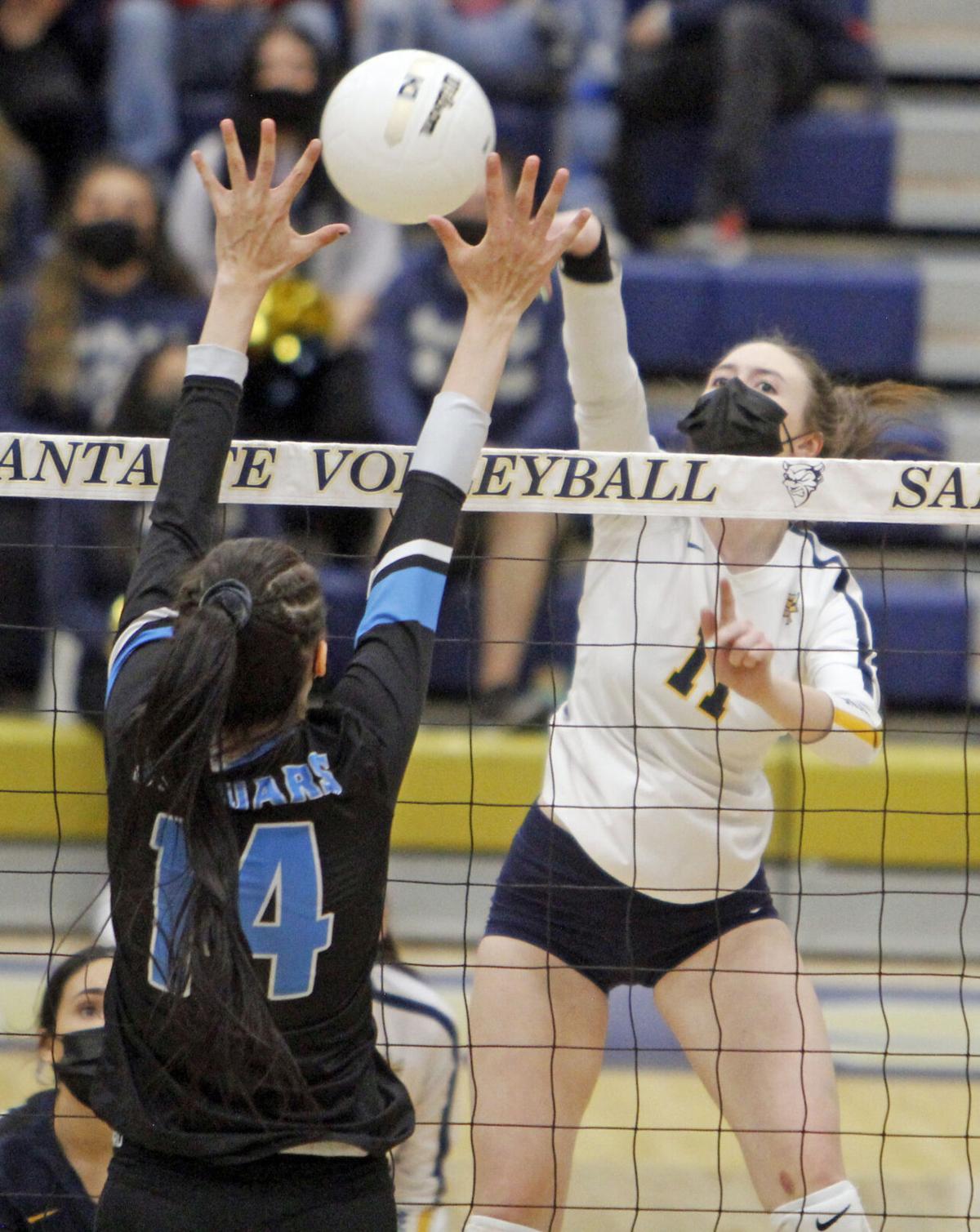 Santa Fe High’s Isabella Melton, right, spikes the ball against Capital on March 16 at Toby Roybal Gymnasium. 'You hear it a lot, but we are a family,' Melton said. 'I would say no one stands out, but all of us kind of do.'

Demons outside hitter Laila Bernardino, preparing to hit the ball Thursday against Cleveland in Toby Roybal Memorial Gymnasium, says of the team chemistry: ‘It’s a belief we have in each other. We just know we’re going to accomplish our goals if we all work together.’

Santa Fe High’s Isabella Melton, right, spikes the ball against Capital on March 16 at Toby Roybal Gymnasium. 'You hear it a lot, but we are a family,' Melton said. 'I would say no one stands out, but all of us kind of do.'

ALBUQUERQUE — You can put pen to paper and try to diagram the secret to Santa Fe High’s success on the volleyball court this season.

Demons coach Josie Adams figured it out four years ago.

Most of the players, they had the answer even before that.

As the top overall seed in the Class 5A State Volleyball Tournament, Santa Fe High’s remarkable season in a time of COVID-19 will reach the end Saturday night in The Pit. The Demons (10-1) face perennial big-school powerhouse Centennial (13-0) for the state title.

Moments after Santa Fe eliminated district rival Cleveland in Thursday’s semifinals, Adams said getting to the brink of the program’s first state title since 1996 comes as no surprise.

“I knew this team was special four years ago,” she said. “The first time I got to know these girls, I understood the power they had. So am I surprised? No way. If you go back four years and see what I saw, everyone would say the same thing.”

Some of the players admit that while last season’s roster arguably had more raw talent, the 2021 version of Demons volleyball has something no amount of talent can bring to the court.

“We’re passionate and we play together,” said senior Jorja Chambers, one of the team’s powerful hitters who have dominated the front lines all season. “Most of us have been playing together since we were in fourth grade. It’s more than just a team thing, you know? We know each other and, yeah, we all get along. That’s the strongest thing about us.”

Team co-captain Laila Bernardino agrees. One of the top outside hitters in New Mexico, she said there is no one player who rises above the others. When the Demons beat Cleveland for the first time during the regular season, she said the chemistry the team shares behind closed doors is evident once the team takes the court.

“It’s a belief we have in each other. We just know we’re going to accomplish our goals if we all work together,” Bernardino said. “I mean, yeah, we might have times when it’s tough. Maybe we’ll lose or something, but the one thing we always do is stick together.”

How strong is that bond? This week, multiple players were asked who among them has the most hops, the best serve, who’s quickest on their feet and who hits the hardest.

“I would say all of us are,” said senior Sydney Pino-Pacheco, one of six seniors on a roster as deep as it is humble. “Everyone on the team does something to add to it. There’s a couple who jump high and hit hard, but everyone does.”

Same goes for senior Isabella Melton, a standout hitter who spent plenty of time lauding her teammates in the back row. Often the unsung heroes of any volleyball team, it’s the setters and libero who do the majority of the heavy lifting — all without much fanfare.

From a distance: Saturday’s match in The Pit is off-limits to fans thanks to Bernalillo County’s status in the state’s framework for dealing with the coronavirus pandemic. The only people allowed into the arena will the players, coaches, game personnel and media.

It will be streamed online for a fee.

“Of course we want our fans there, but we’re a team that can go in there and play the game without them,” Melton said.

“Like I’ve said, we bring our own energy,” Chambers added. “If there’s no one there or a bunch of people, it doesn’t matter. Once we start playing, I don’t think we’ll even notice.”

Adams concurred. She said any time spent worrying about parents and fans not getting in is simply wasted energy. She has encouraged the team to maintain a level of tunnel vision throughout the season and said Saturday’s match is the culmination of everything they’ve been working toward for years.

“This is a season that looked like it might never happen because of COVID, and after all the doubts, all the talk, all the worrying, we’re still here,” Adams said. “These girls, they deserve all the credit. They’ve believed in themselves this whole time, and now that they’ve gotten the chance to play, they want to prove it.”

All but two volleyball state championship matches since 1998 has had at least one team from either Albuquerque or Rio Rancho; the other coming five years ago when Centennial beat crosstown rival Las Cruces in what was then the Class 6A tournament.

Click your heels: Dorothy wore red shoes in The Wizard of Oz.

So does Chambers every time she takes the court.

Wearing the red shoes, she said they became her favorite pair of footwear during offseason club ball. No matter how far away she is from any fan in the building, she’s always easily visible because of her shoes.

“I have another pair that would probably match the uniform a little better, but these always sort of felt right,” Chambers said, looking down at her feet after Thursday’s semifinal win against Cleveland.

The team’s coach then was Mike Thompson, who led the program to the 1994 title and took it back to the finals in ’95 before capping an undefeated season in ’96 with a win over Farmington in the finals.

Thompson is now a volunteer assistant with the Demons, coaching the program’s freshman team and spending most nights as an assistant to Adams with the varsity.