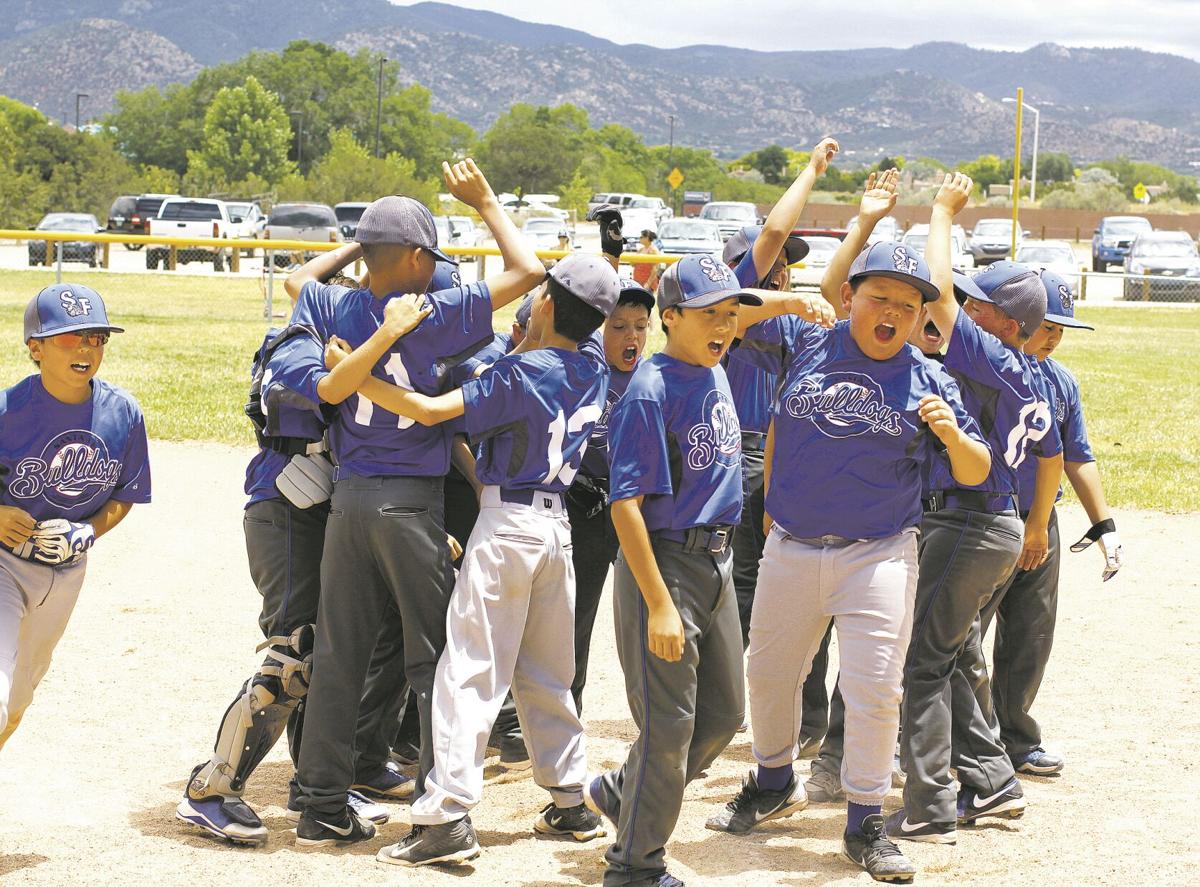 The Santa Fe Bulldogs celebrate in 2014 after a win during the AABC South Plains Regional Tournament at Ragle Park. The state has allowed youth club sports to resume operations, using the same guidelines as the New Mexico Activities Association. 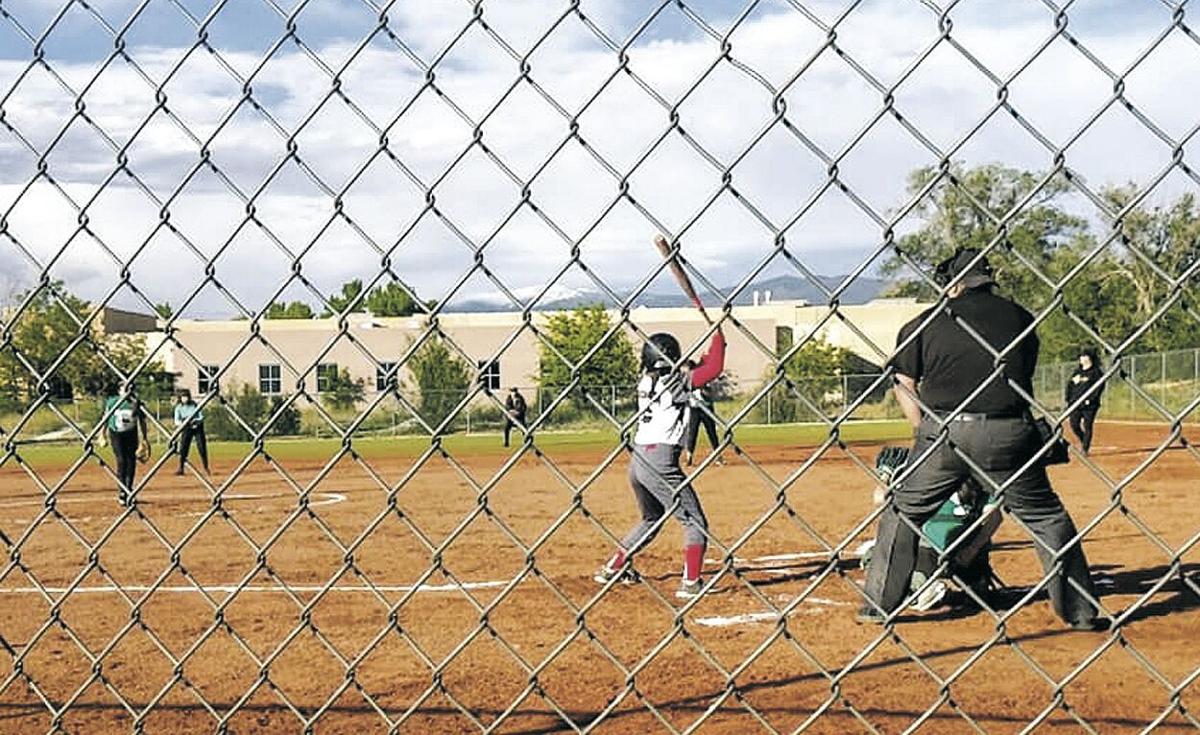 A softball team from the Santa Fe Little League plays in 2019. The state has allowed youth club sports to resume operations, using the same guidelines as the New Mexico Activities Association.

The Santa Fe Bulldogs celebrate in 2014 after a win during the AABC South Plains Regional Tournament at Ragle Park. The state has allowed youth club sports to resume operations, using the same guidelines as the New Mexico Activities Association.

A softball team from the Santa Fe Little League plays in 2019. The state has allowed youth club sports to resume operations, using the same guidelines as the New Mexico Activities Association.

After a year of idling in limbo, youth sports in New Mexico are, at long last, revving back to life.

State officials amended their COVID-19-safe practices late last week to allow youth club sports to operate under the same guidelines as those implemented by the New Mexico Activities Association, the state’s governing body for high school sports. It frees youth sports of all types to return effective immediately under the same restrictions faced by the NMAA.

“Parents have had their kids sitting inside waiting for a year without anything to do, so this is huge,” said Ian Farris, the co-owner and operator of Santa Fe’s E&G Baseball Academy. “I think you’re going to see a boom for sign-ups in every sport you can think of. People are just ready for this. Parents won’t be as concerned about what to do with their kids as soon as the options start coming back.”

Like most youth sports entities, E&G took a significant hit when the state shut down sports of all levels down in March 2020. College and professional sports were not allowed to practice or train within state boundaries, forcing teams to play seasons on the road or, in the case of the state’s professional baseball organizations in Albuquerque, Santa Fe, Alamogordo and Roswell, cancel things altogether.

Youth sports were hit particularly hard because taking the show on the road simply wasn’t an option.

“I mean, how many kids sat around waiting this thing out for the last year? All of them did,” Farris said.

E&G, which operates the city’s largest baseball and softball training center, survived with a little creative ingenuity from the business end. Farris said he splintered workout plans into small groups to remain in compliance with the state health order, as well as developing an app that transmits workout information and exercise plans.

He took it a step further by creating four-player teams and starting a baseball league in which each player faced live pitching inside the E&G facility, each at-bat monitored by a computer system that calculated the results of each ball with which a player made contact. He downloaded the data and made stat charts for league leaders and game results.

Not every sport was quite so lucky. Soccer leagues fell silent, prompting some to play in tournaments outside New Mexico. Running clubs disbanded, leaving training programs up to each individual.

“I mean, we could all go for a run on our own, but it’s just not the same as doing it with a team in a real practice,” said Maggie Rittmeyer, a senior at Santa Fe’s Academy for Technology and the Classics. “You spend so much time trying to be safe that it’s hard to get out there and actually do things on your own.”

With the curtain finally starting to lift, it’s finally time to get back to letting kids do their thing — and not a moment too soon, said Santa Fe Little League President Aaron Ortiz.

“Kids have been cooped up for so long,” he said. “The time off gave us a chance to make some big changes but, yeah, as long as people have the peace of mind knowing we’re doing everything we need to to keep the kids safe and give them a place to be active I think they’re happy.”

Youth organizations, from the popular soccer and basketball leagues to track clubs and indoor volleyball, will roar back into existence with April registrations. Farris predicts each of them will see significant jumps in participation.

“We’ve all been inside for way too long and parents, they see what it’s done to their kids being away from getting out and having fun,” he said. “You’ll probably see kids doing a little of everything now.”

Ortiz’s Santa Fe Little League is one example. After the city’s longtime rival leagues — the Metro, National and American — merged a few years ago, numbers dipped steadily to the point where it appeared youth baseball in the state capital was fading into oblivion.

Ortiz said just 140 kids had signed up for his league a couple years ago. Before the pandemic hit last year, it had grown to about 320 players.

“We were looking forward to a good spring season with good numbers, then the coronavirus came in and everything stopped,” he said.

Little League offered refunds to families in financial need but told others that their child was free to return at no cost once the health restrictions were lifted. As of Wednesday afternoon, more than 350 kids had signed up, with another week of registration remaining. He anticipates those numbers to climb as word gets out.

Like E&G, little League was forced to rethink its business model and do things to attract more players. In an attempt to appeal to the families drawn to travel teams for club ball, SFLL will have interleague games against teams from nearby cities, including Los Alamos, Albuquerque and Pojoaque.

Just like anything else, it takes a helping hand to manage the COVID-19-safe protocols set in motion by the state. Ortiz said the league purchased 40 thermometers to distribute to coaches and a local cleaning company donated supplies to sanitize dugouts and other touchable surfaces.

“At this point, we’ll do what the parents and families are already doing, and that’s follow whatever rules we have to to get the kids back out there,” Ortiz said.

Interesting article about the return of youth sports in Santa Fe. Mr. Webber mentions to his readers that a couple of years ago "numbers dipped steadily to a point where it appeared youth baseball in the state capital was fading into oblivion ". Mr. Webber Santa Fe AABC had over 800 kids playing on 60 + teams that year at Ragle. This season coming out of this pandemic we have almost 600 registered that will play on nearly 50 teams starting May 1. We appreciate the article because youth sports is so important to the success of our community and Aaron and his group at little league have done a incredible job strengthening that program. But, I wish you and Milan (with his past articles) would take a look at complete angle before writing your story. Thanks to James Barron (SF New Mexican) and the SF Reporter that have looked at the complete angle before writing articles in years past.

Thanks Tommy for what you, Aaron, other youth sports officials, the coaches, umpires, families, & sponsors due for the City's youth. I'll give Weber this, he’s a local writer for the SFNM who covers sports and from time to time, he'll produce a piece that's not totally negative. He just comes across as Santa Fe sports are beneath him. Perhaps it's that he comes from sports mecca metropolis of Albuquerque. I get it doesn't pay well so there's that but like so many things that change, I remember growing up in the late 70's and 80's, every score of every little league, YAFL, Jr, High, elementary basketball,, Babe Ruth, game was published and articles were written where you would see that National League's Santa Fe Motors beat Sauter Lincoln 7-4, and Ronnie Ortiz went 3-4 with a two doubles and a picture of Londy Martinez on the mound who pitched 6 innings. Ahhhh the good old days. I remember getting my picture on the sports page in Babe Ruth and there being 15-20 column inches on all the games from that night. This was a bi-weekly occurrence. regardless of twitter, facebook, cell videos, I think it would still be awesome to get your picture in the local sports page as a 8-14 year old, turning a double play, making a layup for Kearney Elementary, or touchdown for the Milagro Thunder.

Will, anyway we as Santa Feans can help you make this happen or is this a management issue?