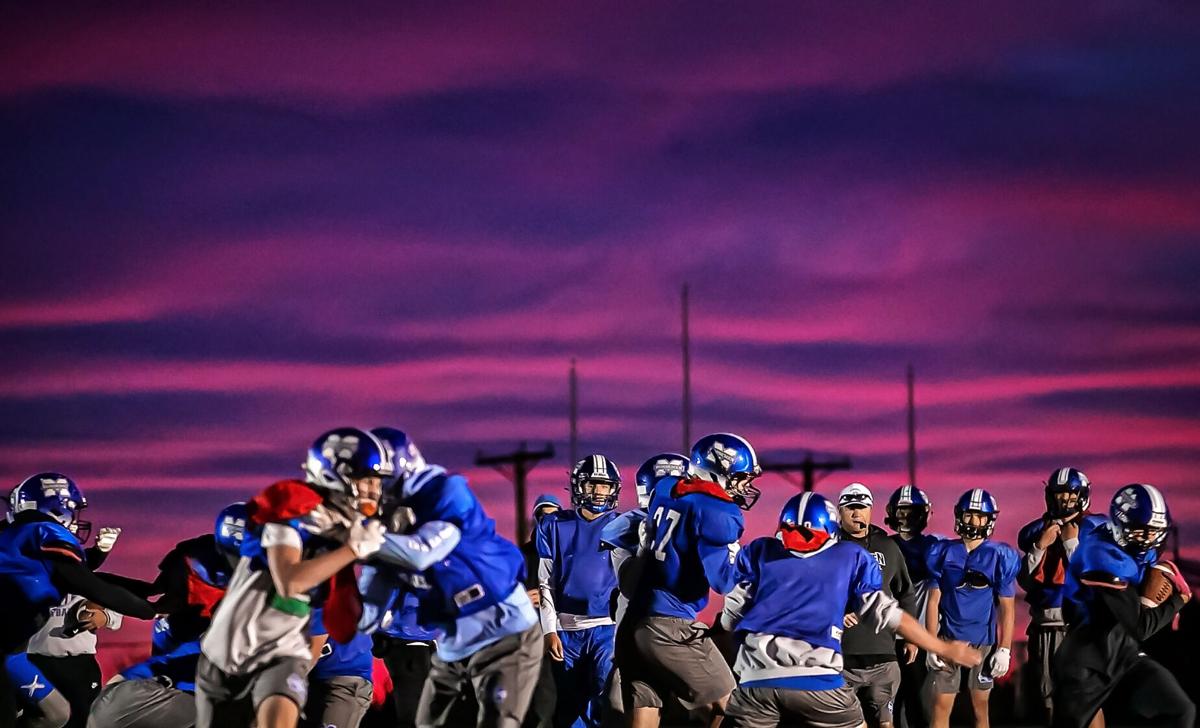 As the sun sets over a dimly illuminated Christian Brothers Athletic Complex on Tuesday, St. Michael’s prepares for its state semifinal matchup vs. Raton. Without permanent lights at the field, the team has been setting up portable units to extend practice time since the time change’s loss of daylight. 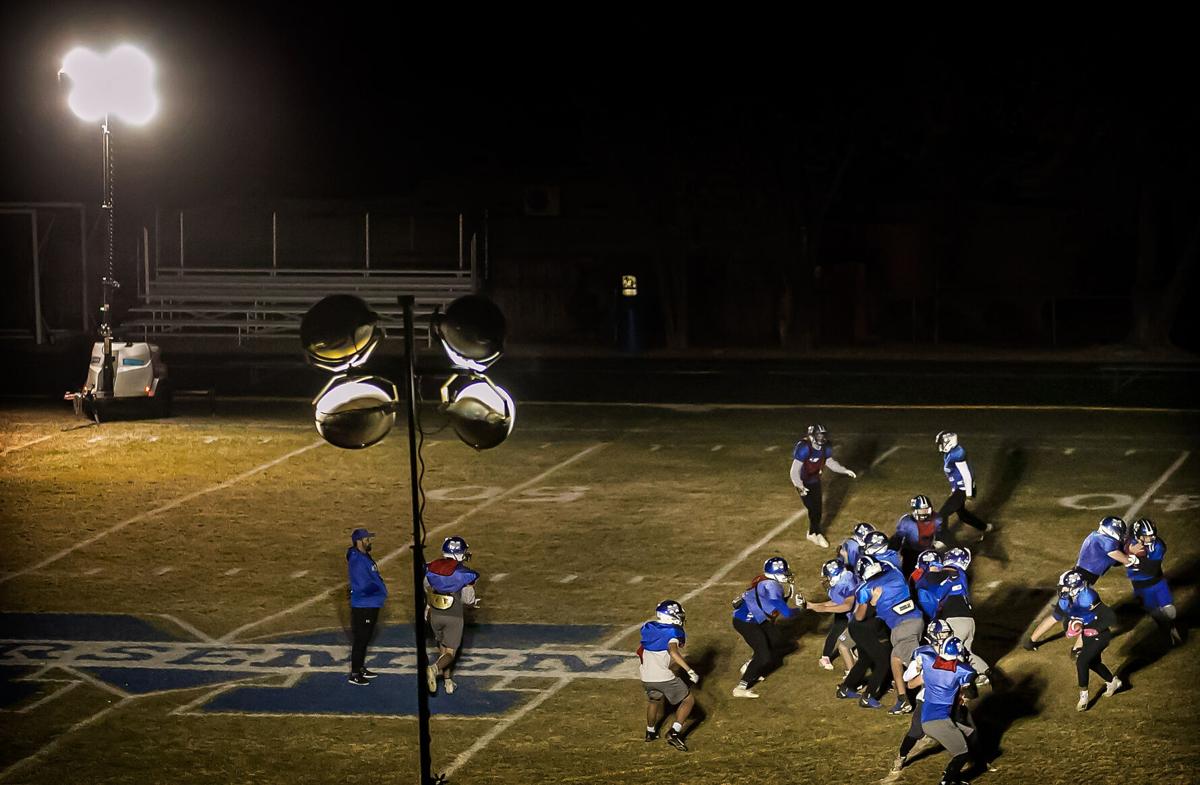 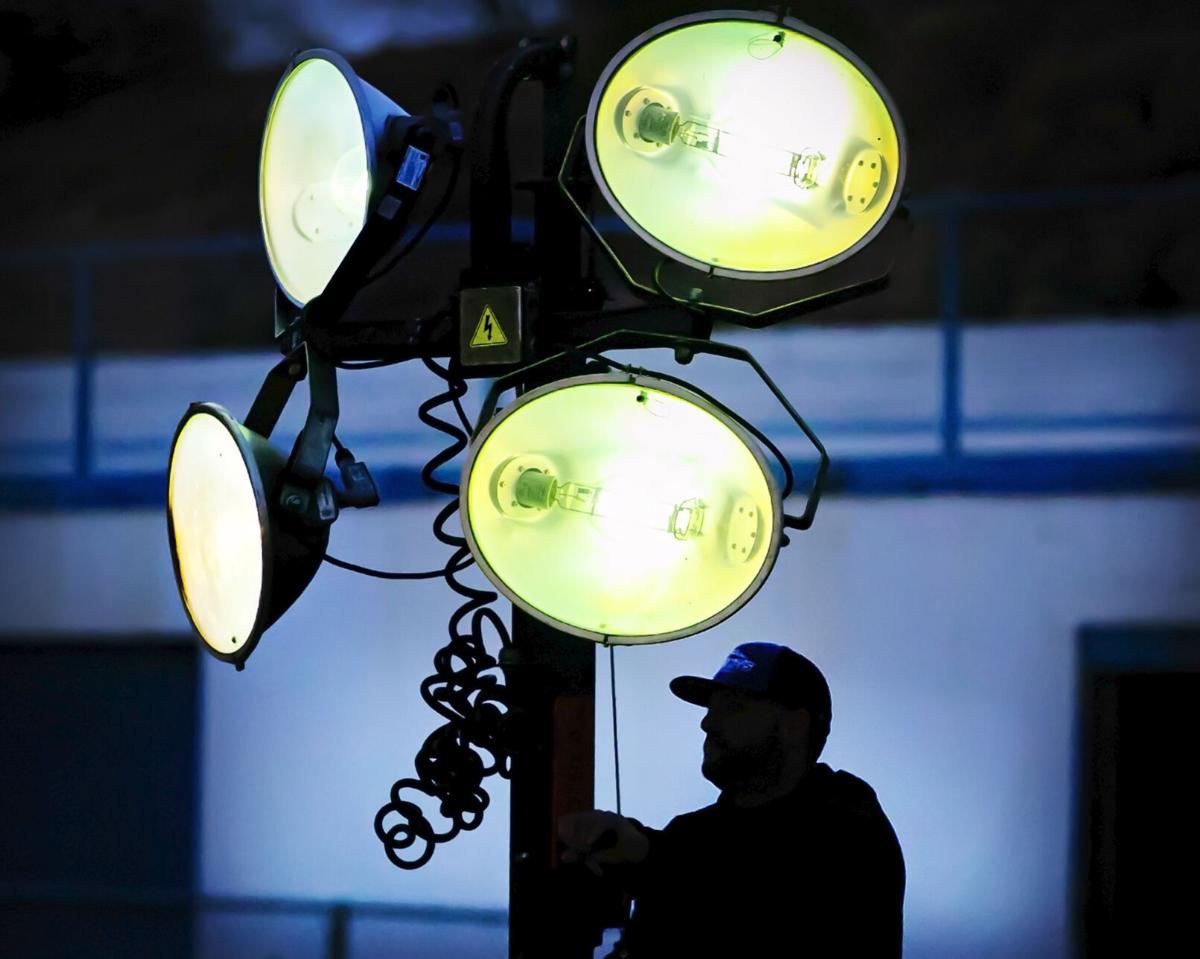 As the sun sets over a dimly illuminated Christian Brothers Athletic Complex on Tuesday, St. Michael’s prepares for its state semifinal matchup vs. Raton. Without permanent lights at the field, the team has been setting up portable units to extend practice time since the time change’s loss of daylight.

It’s not quite the same as watching FDR flick the switch from the Resolute desk to turn on the lights at Cincinnati’s Crosley Field for baseball’s first night game in 1935.

It’s also not as stunning as seeing Wrigley Field host a game at night for the first time in 1988.

Still, watching the portable light standards — one positioned at opposite 40-yard lines on both sides of the field — chug to life and cast hard shadows across the lumpy grass at the Christian Brothers Athletic Complex on Tuesday night was a sight to behold. Home to the St. Michael’s football team, the field will be the site of this weekend’s Class 3A state semifinal between the host Horsemen and visiting, undefeated Raton.

St. Michael’s is one of the few high schools to play on a field without lights. Installing them, said Horsemen head coach Joey Fernandez, would cost nearly $300,000.

Until that day arrives, the loss of extra daylight from the time change in early November means two things: The loss of the school’s sports PE class that allows the football team to begin practice at 2:30 p.m., and just a one-hour window to conduct workouts before the sun fades around 5 p.m.

On Tuesday, it was business as usual after the coaching staff rolled the light standards out and cranked the gas generators to ignite four stadium lights propped about 15 feet off the ground.

To the west was a spectacular sunset of orange, red and purple. Underfoot was the halogen glow of green and yellow grass illuminated in two arching light patches extending away from each sideline.

“I didn’t even notice any of that,” said St. Michael’s senior Devin Flores, wiping his brow as he looked in the direction of one of the light standards. “It’s pretty weird out here like this but, you know, we’ve had them for a few years so we’re getting kind of used to it.”

While the tradition of using portable lights dates to before the pandemic, Fernandez said the school began renting the lights after the team lost the right to practice a mile down the road at Santa Fe High. The only other option was Fort Marcy park across town.

If there’s anything good of it, he said, it means it’s November and the Horsemen are still alive in the playoffs. They’re in the state semifinals for the first time since 2016.

As interesting as it is to look at, it doesn’t take long to realize how hard it is to actually see the ball once it leaves the quarterback’s hands. Flores should know. As the team’s top receiver, he has the challenge of tracking the pigskin once it practically transforms into a crescent moon flying right at him.

“We do drop some of them, yeah, but I think coach kind of cuts us a break,” he said.

“Nope,” Fernandez said. “Drops mean pushups. Running. It is kind of tough to see, but I think it actually makes the focus a little better, and hopefully it works out once we get out there and play.”

Quarterback Zach Martinez agreed, although he admits it’s basically like playing football in a dimly lit closet. The hard shadows turn teammates into silhouettes, and the limited lighting means there’s only about 25 to 30 yards of field that are actually usable.

“It changes the way we practice, but at least we’re still out here practicing, so that’s good,” he said. “It looks weird, but once you get going you don’t really pay attention to it anymore.”

Regardless of who the Horsemen might play in the championship (assuming they get that far), they’ll do so on the road. They owe Robertson a game, meaning it would be either Nov. 26 or 27 in Las Vegas. They’ve never played Socorro this late in the postseason and, by virtue of the New Mexico Activities Association’s bylaws, would cede homefield advantage to the higher seed. Socorro is No. 2; the Horsemen are No. 4.

Interesting aspect of hardship - sports field lighting. We live behind the SMHS school/fields and have sent two emails to school administration/staff about the excessive number I of bright lights on the building left on all night long, disrupting our enjoyment of our porch and the skies. No response to date. I, too, am wondering what is the responsibility of schools’ stewardship regarding the New Mexico Night Sky Protection Act? Not to mention, if they decrease their electricity bill by turning down/off these lights burning all night long, perhaps they could redirect those funds toward the purchase of field lights to be used during practice hours.

Was the school there when you bought the house?

Chris, SMHS was built in the late 60’s and there were no houses, apartments, businesses or churches in that area.

St. Michael’s High School has been at that location since the 1960’s. In the 1980’s the houses behind SMHS were not there-it was a large arroyo where SMHS and Capshaw student athletes would run for PE classes or Cross Country practice.

As for the lighting, I would expect that SMHS would like to accommodate the concerns of their neighbors, but there’s this little thing called “Security”. I live behind Kearney Elementary and they have security lights shining all night, but since they were here before my house was built and I don’t want my taxes to pay for restoring damaged/vandalized property or increased insurance premiums, I can live with the extra security lighting.

And what about dark skies? Field lights are way too bright well beyond the playing fields. They cast light up to 3 miles away!!!

Because of the growth of Santa Fe and arrival of new residents to this wonderful city, the dark skies of Santa Fe are no more.

I do believe that Dark Skies Laws are important, but they should not be used to eliminate the opportunity of our youth to engage in sporting activities or the ability of our schools to properly secure they properties.

They are lucky. We used to practice until you couldn't see the man in front of you.

Hello David. Being able to tackle someone you could see must have helped improved your skills come game time. [wink]

Hope to see you Saturday in Vegas!