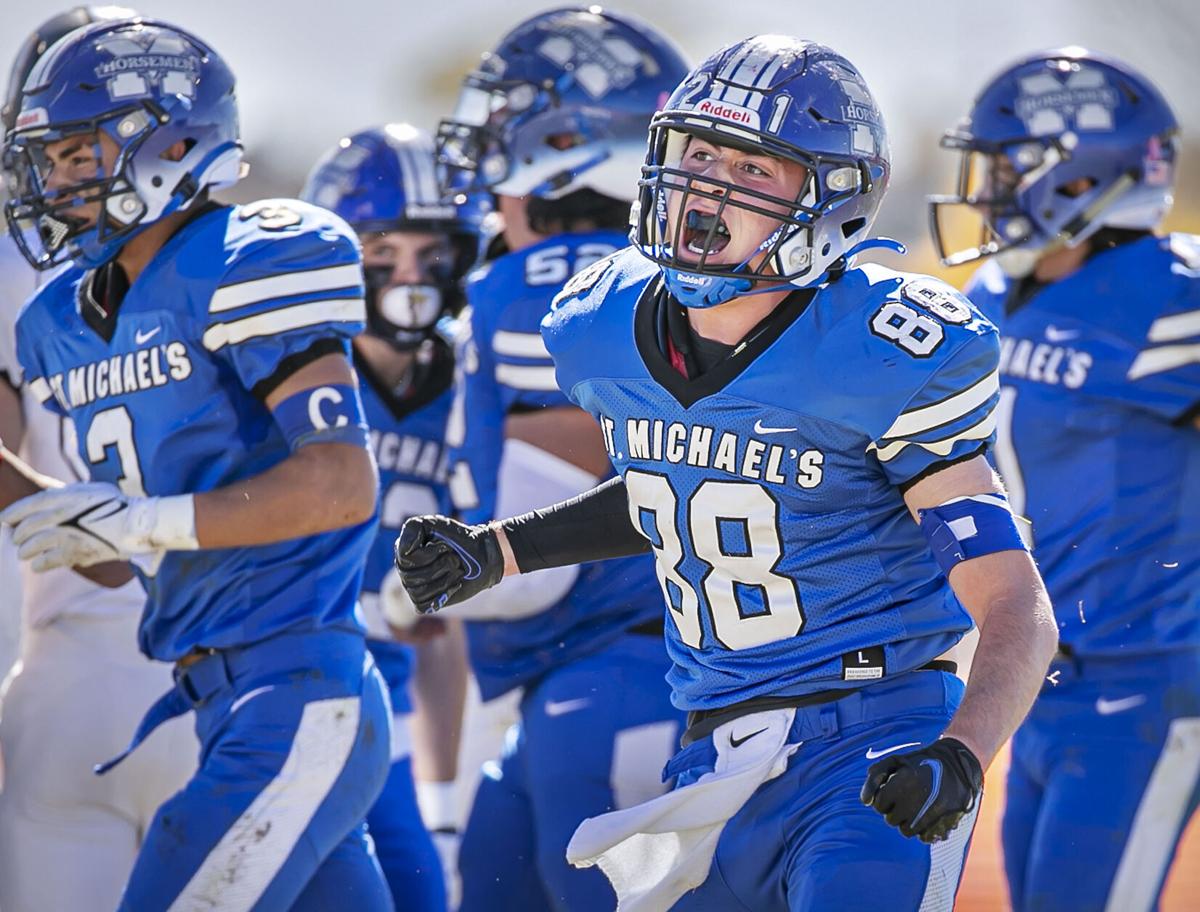 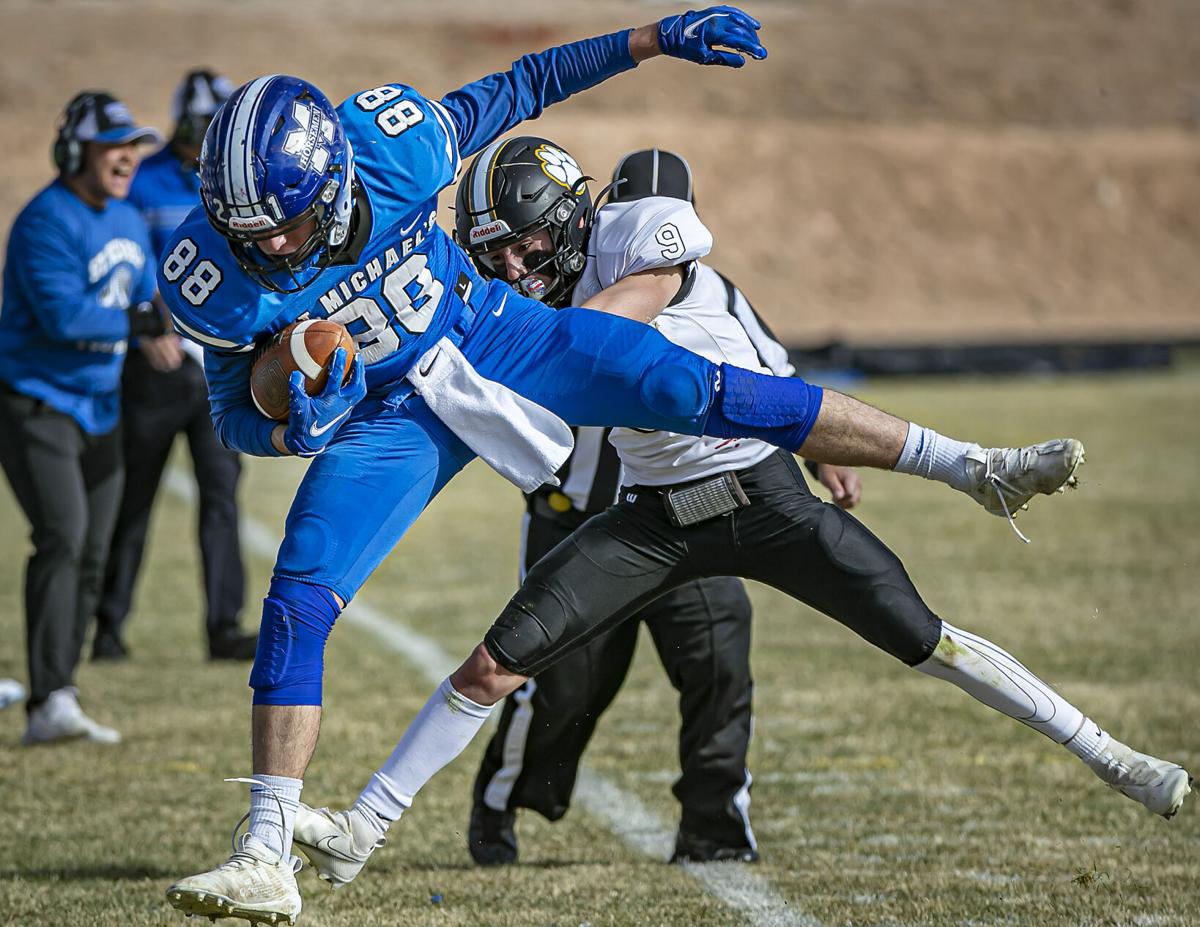 Horseman Diego Armendariz, left, is pushed out of bounds on a carry by the Tigers’ Chance Middlebrook during St. Michael’s 7-0 win over No. 1 seed Raton in the Class 3A state semifinals on Saturday at St. Michael’s.

Horseman Diego Armendariz, left, is pushed out of bounds on a carry by the Tigers’ Chance Middlebrook during St. Michael’s 7-0 win over No. 1 seed Raton in the Class 3A state semifinals on Saturday at St. Michael’s.

It’s the way his father did it and, before him, his grandfather.

Standing 6-foot-1 with an athletic build that tips the scales at 180 pounds, St. Michael’s senior Diego Armendariz has become a force to be reckoned with on the football field. An edge rusher and tight end for the Horsemen, he has made a name for himself by being the guy who doesn’t actually get named as much as he deserves.

Take last weekend, for example. In helping his team to a 7-0 upset win over top-ranked and undefeated Raton in the Class 3A state semifinals, it was Armendariz who recovered a key fumble in the fourth quarter. He followed that a few minutes later by delivering a critical block that took out two Raton players on a fourth-down running play in the final minute that essentially ended the game.

“Plays like that, they’re huge for us,” said St. Michael’s coach Joey Fernandez. “Sometimes, kids are put in a position to make a difference, and Diego came though. That block at the end was big.”

Armendariz, whose grandfather is legendary former Capital boys basketball coach Al Armendariz, has proven to be a solid pass-catcher in an offense that has been re-invented in a season of massive turnover and adversity. A number of players have missed time due to COVID-19 protocols. Some have been injured, others moved around to fill gaps.

Armendariz has been a mainstay. He’s second on the team in receptions and yardage, averaging more than 18 yards per reception with a pair of touchdowns.

On defense, he has 51 tackles with three sacks. Perhaps his biggest play of the season was last week’s forced fumble and recovery against dangerous Raton running back Cayden Walton.

“The defense has been amazing lately, and everyone’s been playing great in the playoffs,” Armendariz said. “There’s been some legendary defenses coming out of St. Mike’s and some legendary players, but I think we’ve done pretty good.”

The fact the Horsemen held Walton to fewer than 100 yards rushing for the first time all season spoke volumes about the defense. If that didn’t, nothing screams louder than a playoff shutout.

Armendariz said he’s always been taught to stay humble and say the right things. When asked about the team’s effort that landed it a spot in Saturday’s championship game at Robertson, he took a step in the other direction and said his teammates deserve the credit, that their march to the finals shouldn’t come as a surprise to anyone.

“I am not surprised at what we did with [Walton], because we held Martel [Mora, Santa Fe High’s running back] under 100, and we’ve held other amazing running backs like them to bad nights,” he said. “Our defense is really good and the guys — the linebackers, the safeties, the D-line, the corners — everyone’s playing their hearts out and that’s what makes a good defense. It’s what gets a team to the championship game.”

Two months after losing their emotional leader, quarterback Lucas Coriz, and one month after getting throttled in a Friday night game at Robertson, the Horsemen are one win away from accomplishing something no one thought possible.

“We’ve had a lot of adversity, and coach is always talking about how those things make you tougher,” Armendariz said. “There are probably a lot of people who didn’t think we’d be here, but it shows a lot about what kind of players we have here.”

Home cooking: All four of Saturday’s state championship games will be hosted by the better seed. That includes home games for No. 1 seeds Cleveland (Class 6A), Lovington (4A). The 5A game has No. 2 Los Lunas at home against Artesia and, of course, the Robertson-St. Michael’s game. All four kick off at 1 p.m.

Travel time: Not a single playoff game in 3A has been a sellout, but Saturday’s game could challenge that. That said, officials from both schools are encouraging fans to get their tickets in advance through each school’s channels. Robertson’s facility has limited seating, particularly for the visitor’s side.

I played against Al Armendariz teams when he coached at SF High. I was always impressed with the fact that he did so much with so little in the way of talent. Diego is absolutely right. If the Horsemen are going to win the stars are going to have to play like stars but the unsung heroes will be the ones who make the big plays down the stretch that will mean the difference between victory and defeat.