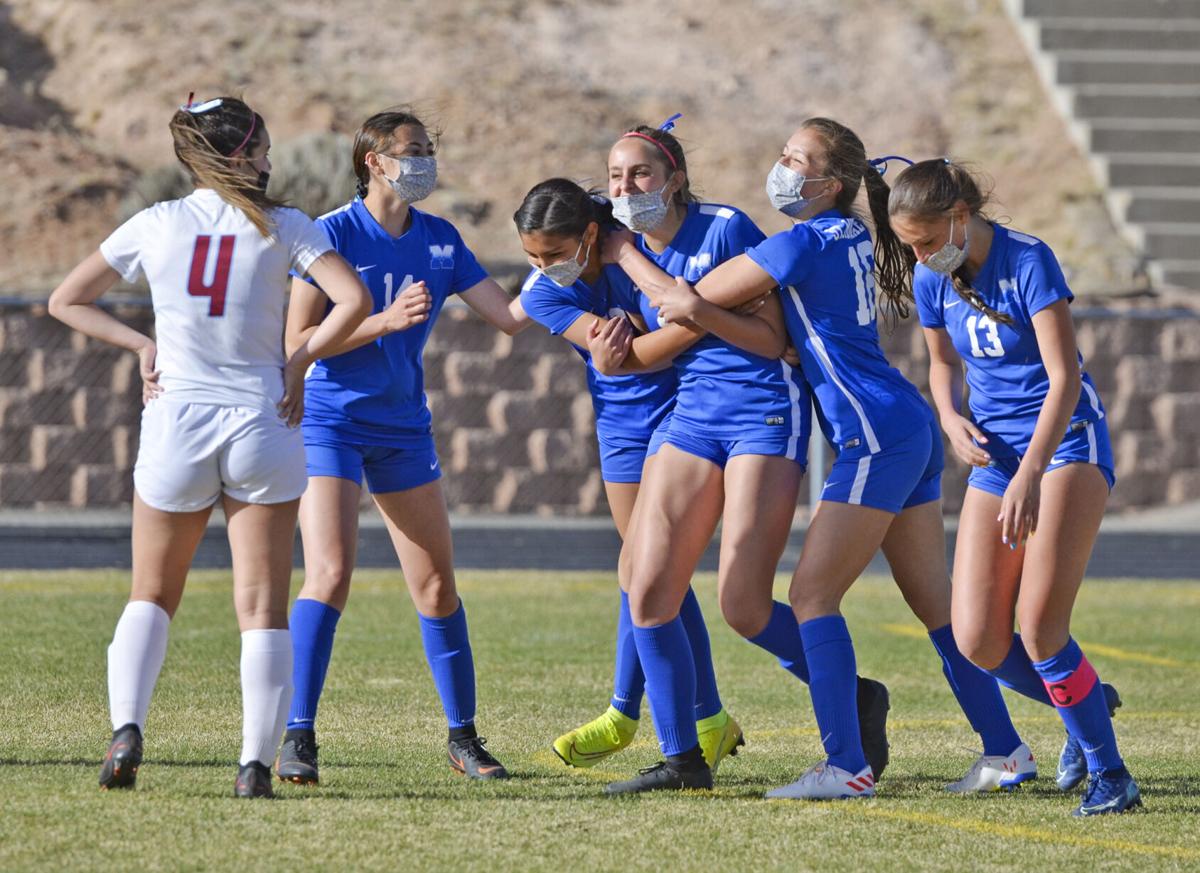 St. Michael's junior Claire Patten is embraced by teammates after scoring a goal against Sandia Prep on Tuesday at Christian Brothers Athletic Complex in a semifinal of the girls State Soccer Tournament. 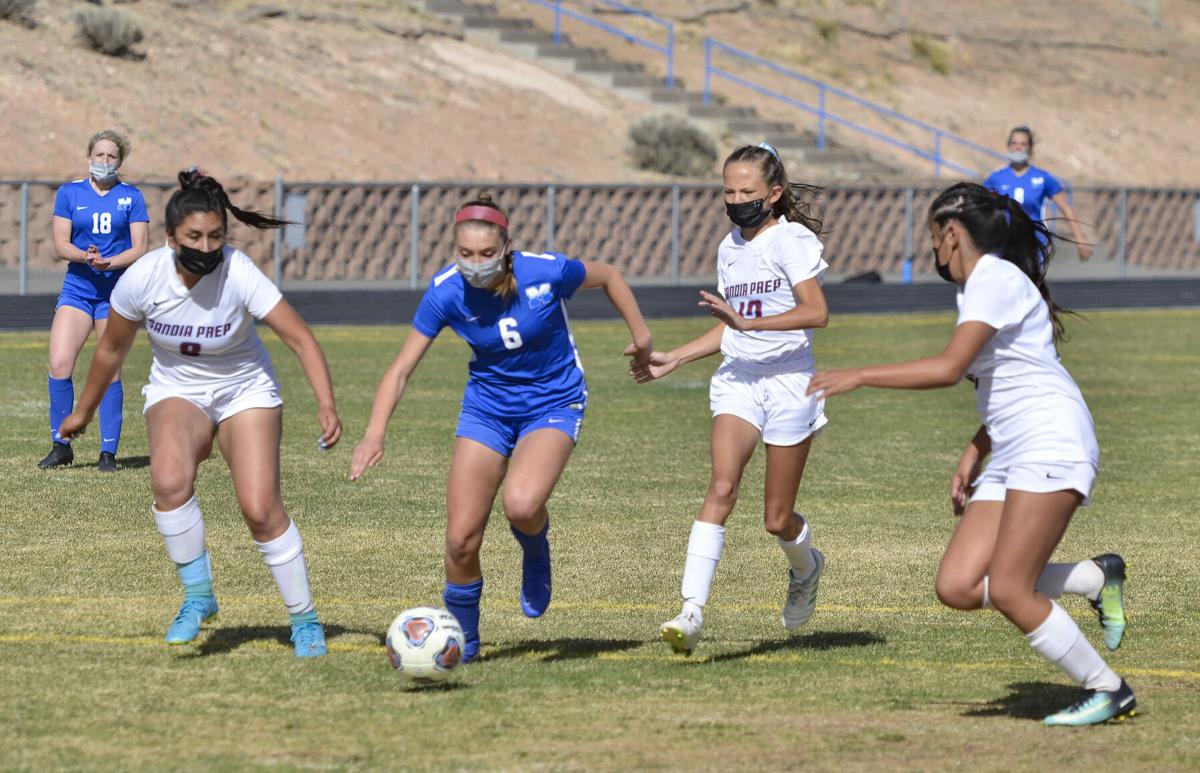 St. Michael's freshman Elsa Ranney Smith gets past a trio of Sandia Prep players before putting a shot on goal in the first half of Tuesday's semifinal of the girls State Soccer Tournament. The Lady Horsemen won 4-0 to reach the final on Thursday. 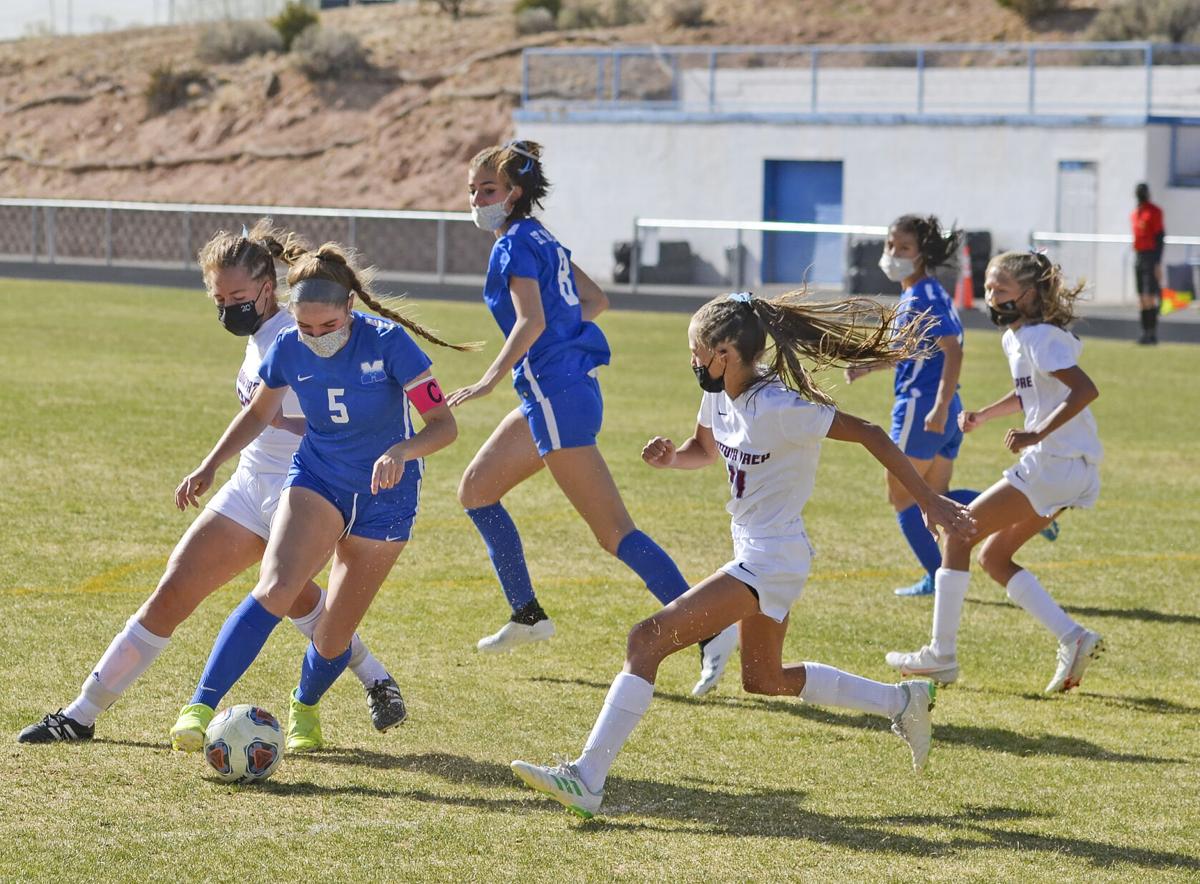 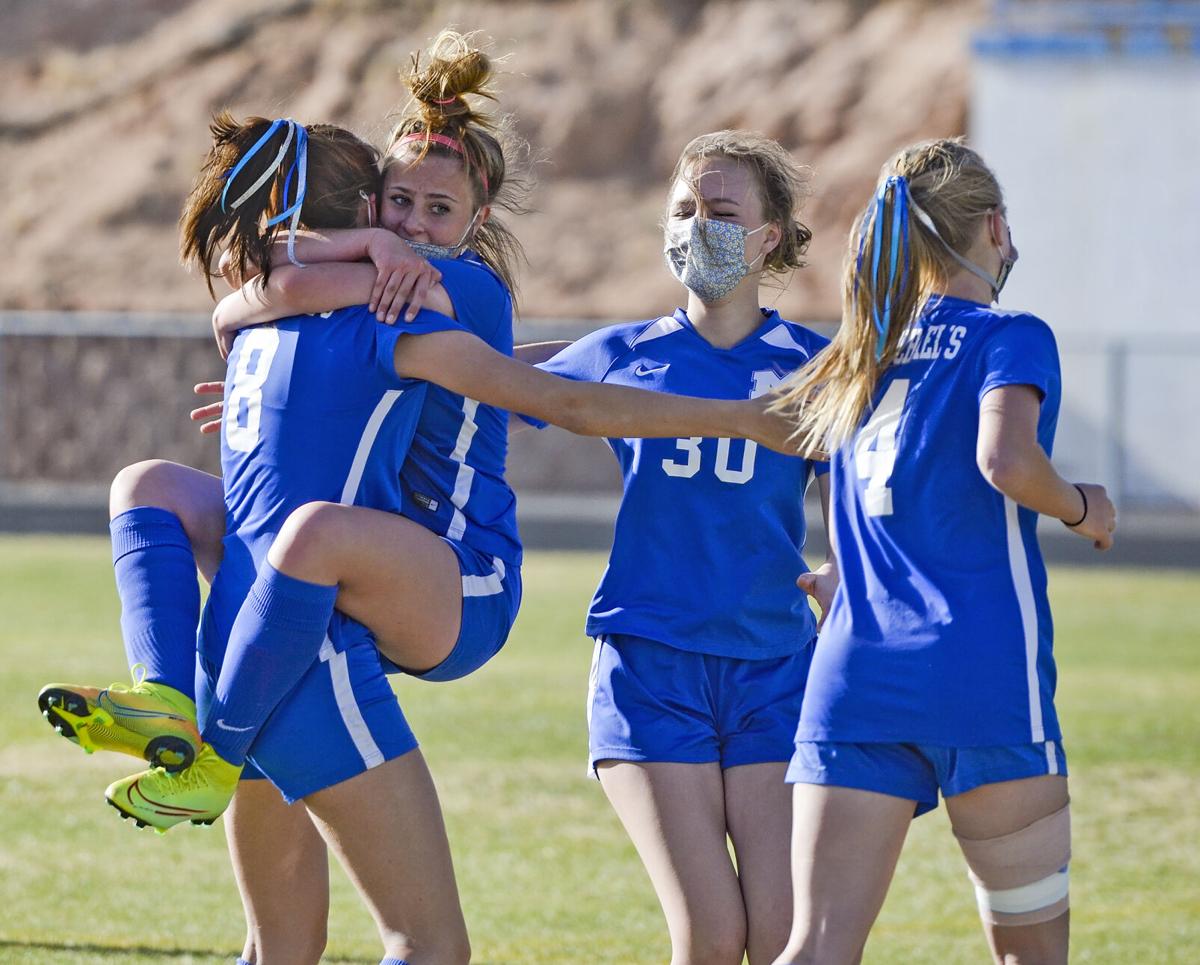 St. Michael's junior Claire Patten is embraced by teammates after scoring a goal against Sandia Prep on Tuesday at Christian Brothers Athletic Complex in a semifinal of the girls State Soccer Tournament.

If it’s true that defense wins championships, the St. Michael’s girls soccer team is well on its way to ending a 12-year drought at the top of the Class 1A-3A food chain.

The Lady Horsemen advanced to this week’s state finals with a 4-0 win over visiting Sandia Prep in Tuesday afternoon’s wind-blown semifinals at the Christian Brothers Athletic Complex. The tournament’s top seed, St. Michael’s will meet No. 3 Socorro at noon Thursday in the championship match at the UNM Soccer Complex.

“Winning state would mean so much to our school and it would mean everything to this team,” said St. Michael’s goalkeeper Milena Keene, a junior whose near-perfect play between the posts is a huge part of the team’s run at the program’s first state title since 2009.

Unbeaten through eight games, the Lady Horsemen (7-0-1) haven’t given up a goal since the March 9 season opener against the same Sandia Prep squad they faced Tuesday. For Keene, that’s 585 minutes with just one goal allowed.

For the Lady Horsemen, it’s a 0.145 goals-against average. They’ve outscored their opposition 42-1.

“I don’t want to give away all our secrets, but we do put players in formations to make it work,” said St. Michael’s coach Alfonso Camarena.

With a hard and steady wind blowing straight across the field from the west all afternoon, the conditions made life miserable for any team trying to score at the east side of the pitch. That was the direction St. Michael’s was going in the first half when nothing worked until the waning moments.

One of the few scoring chances the Lady Horsemen had in the initial 40 minutes came in the 36th minute when diminutive 5-foot-1 sophomore Grace Sandoval drove home a winner from inside the box to end the scoreless tie.

That’s the same Sandoval who nearly had her season end in March when she was hit with a line drive in the face. Initially thought to be a broken nose, it was a blow that required a trip to a hospital, a few days on the sidelines and, according to Camarena, a whole lot of lost blood.

“I guess I could have quit, but it’s all these guys,” Sandoval said, pausing to look around at her teammates gathered around after Tuesday’s match.

It’s all them who made it easy to come back. I wanted to be here.”

After flipping sides at intermission, the Lady Horsemen kept the ball in Sandia Prep’s end most of the final 40 minutes. Aside from a pair of late attacks by the visiting Sundevils, all the action was within striking distance of Sandia Prep’s net. The Lady Horsemen had no fewer than a dozen scoring opportunities after halftime.

The insurance goals started to roll in at the 51-minute mark. That’s when freshman forward Elsa Ranney Smith burned a knee-high shot from just outside the box into the right side of the Prep goal. Just seconds before, Camarena was yelling for Sandoval to take the shot as she worked the ball toward the middle of the field in Smith’s direction.

The ball squirted loose from Sandoval’s control and spun right to Smith, who wasted no time hammering her right-footed shot to make it 2-0.

Sophomore midfielder Farrah Baker added a third goal in the 62nd minute, which was followed by the first goal of the season by junior defender Claire Patten in stoppage time.

The only time Keene was threatened came in the 77th minute of regulation when Sandia Prep sophomore Maddie Hashagen missed wide left on a point-blank shot in front of the Lady Horsemen net.

While Camarena has sung the virtues of Keene’s play at goalie all season, Keene was kind of humble when taking about the St. Michael’s defense pitching seven straight shutouts — the longest active streak in the state.

“I’m not going to take the credit for that because it takes so much more than one person to make that possible,” Keene said. “Everyone has a job and they all do it. They do their jobs and it helps me do mine, you know?”

St. Michael’s has made three trips to the finals since 2014, losing each time — including in 2018 to Sandia Prep.