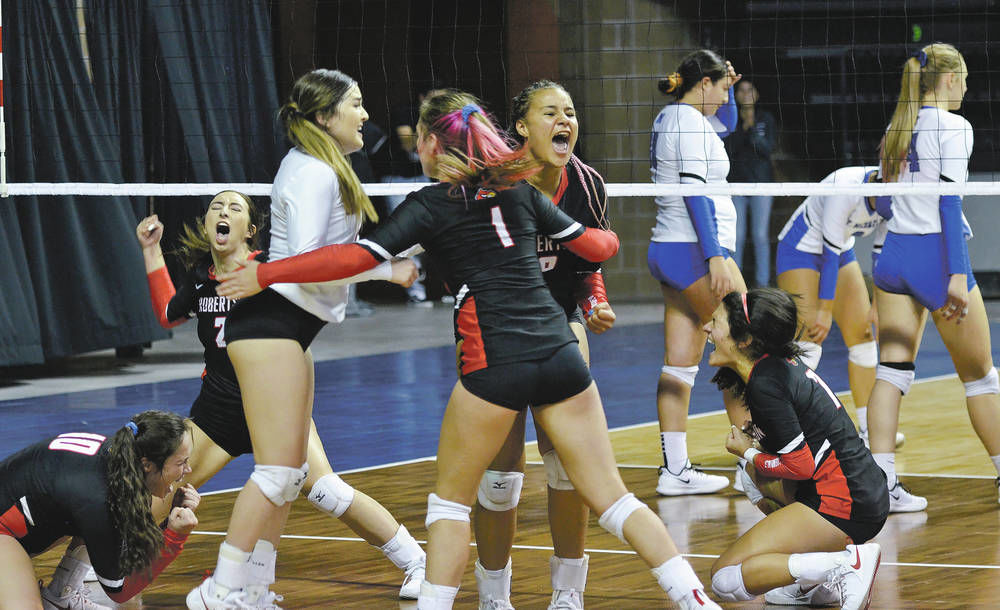 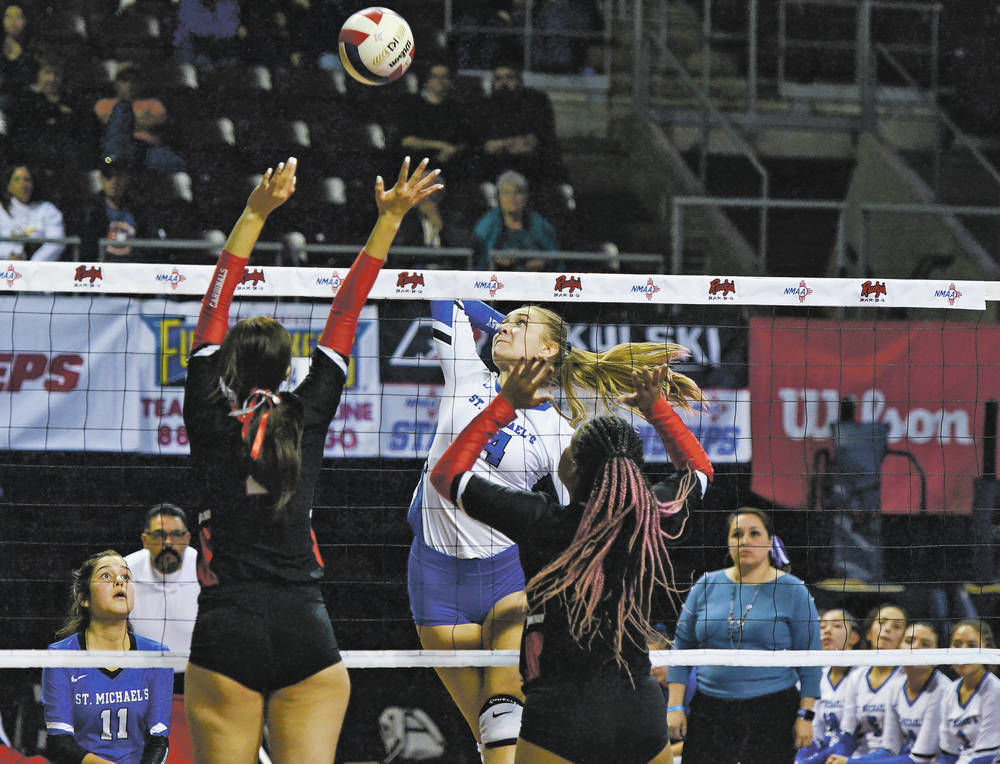 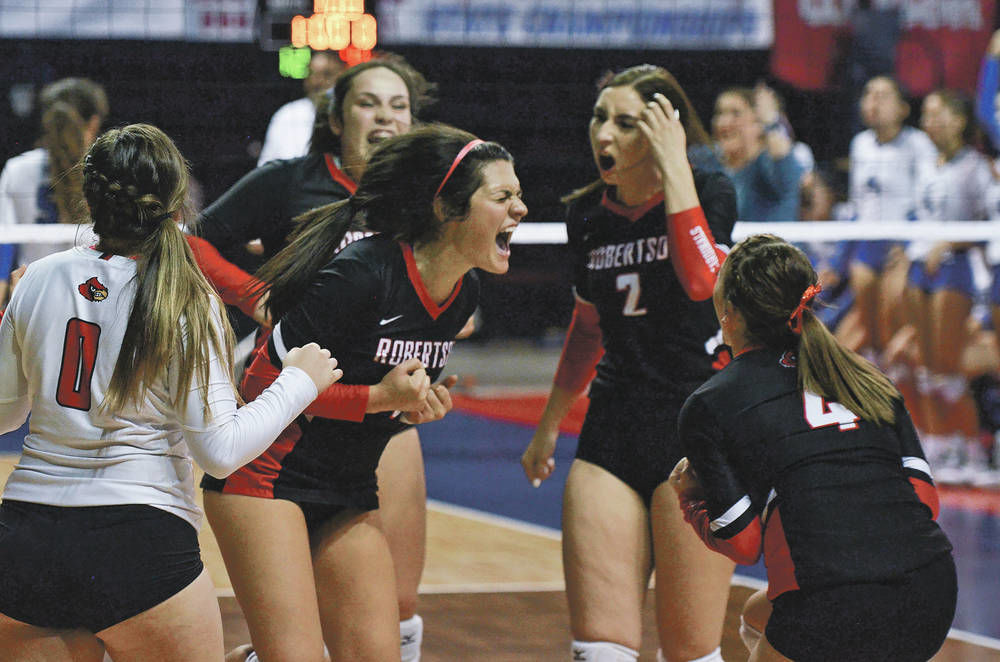 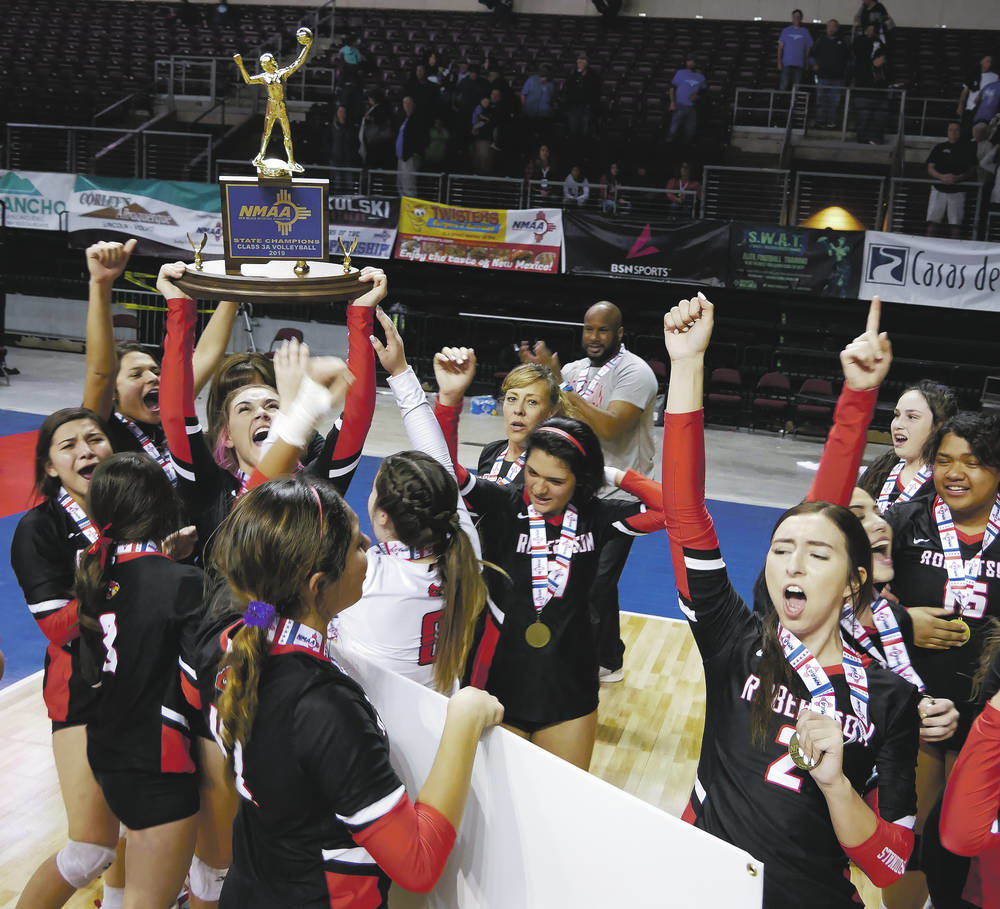 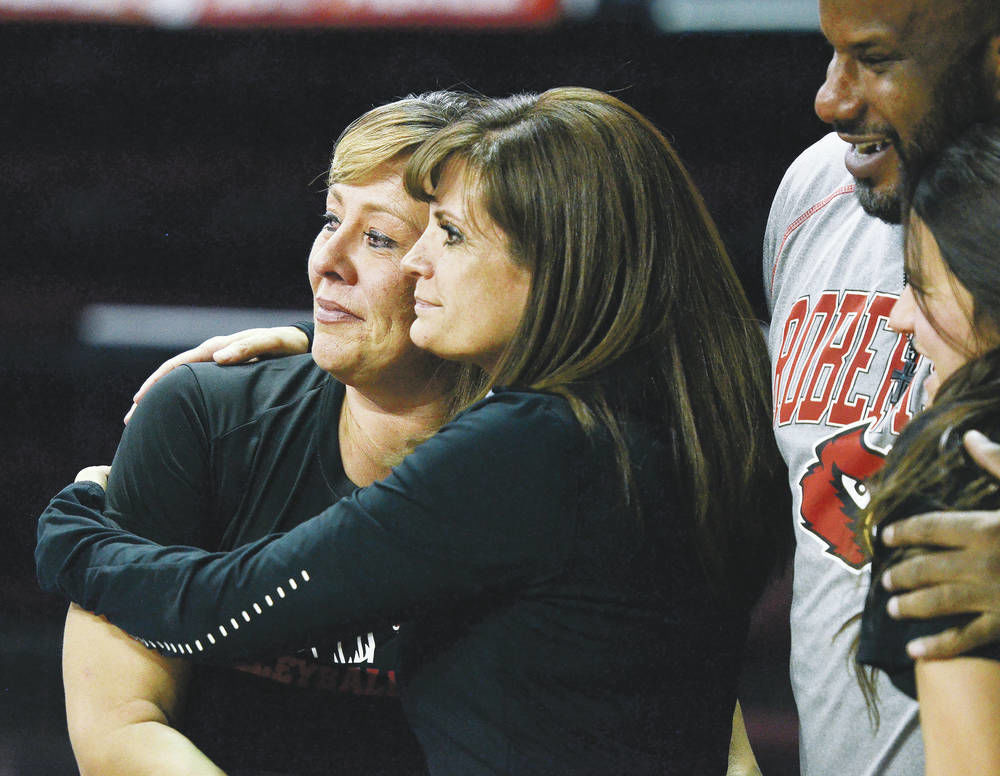 A month of tears, frustration and anger hardened the Las Vegas Robertson Lady Cardinals as much as it brought them together on the volleyball court. Playing the last four weeks of the season without head coach Stacy Fulgenzi, who was suspended pending an investigation into a still undisclosed matter, the Lady Cardinals rallied around their coach and found a way to block out the drama surrounding them.

The crescendo of a long, daunting path to a blue trophy came as Tessa Ortiz hammered home a kill to the right side of the court to cap second-seeded Lady Cardinals’ unblemished run through the 3A bracket.

That completed a 22-kill, six-block performance by the senior outside hitter, as well as a fitting ending in her eyes.

“I just go up, and I’m like, ‘This could be my last point playing high school volleyball forever,’ ” Ortiz said. “I go up and I got a kill. That is the best way I could ever end my season.”

And there jumping and celebrating from the floor 50 feet away from the court was Fulgenzi, who watched for the last two days of the tournament. She went through the handshake line, then was mauled by her players in a group hug for the ages.

Every Lady Cardinal proceeded to hug Fulgenzi and congratulated her for being a part of their run. As the team left the field, chants of “Do it for Stacy” continued as they had throughout the match.

“This is so great, especially to win it for coach,” sophomore outside hitter Stella Garcia said. “This feels so good for my team. Everybody is so happy for us. It’s great.”

While Fulgenzi was Robertson’s rallying point, senior setter and youngest daughter Lauren Fulgenzi said the team learned how to remain unified and play for each other as much as for her mother.

“Everybody has been against us — and I mean everybody,” Lauren Fulgenzi said. “We knew we only had each other. So we just stuck with each other and gave it our all. There was a point in time where I wanted to quit because of how they treated my mom and nothing had been done about it. Now, I just can’t imagine quitting. The hard work we put in …”

Even though St. Michael’s (19-8) jumped out to take Game 1, thanks to a balanced attack that took shape throughout the season, the Lady Cardinals (21-5) regained command thanks to their varied hitting attack, led by Ortiz, Shayla Hillis and Stella Garcia. They also better contained the St. Michael’s outside hitters after the opener, which put more pressure on junior outside hitter Lily Barker to carry the squad.

When the Lady Horsemen needed her in Game 5, Barker was frustratingly stuck in the back row. Robertson took advantage and used a 5-2 spurt to build an 11-6 lead on Jayden Jenkins’ kill that split the St. Michael’s double block and accelerated the end.

“They have been through so much, and it could have been so easy for them to fall apart,” Stacy Fulgenzi said. “There were a lot issues that went on during the season that made them feel like they were picked on. For them to keep fighting and hold it together. They always had each other’s backs. It speaks volumes of what kind of girls these are.”

As for the future, coach Fulgenzi said she hopes that she could return to the school from which she graduated.

“It would be nice to even know what these last four weeks have been about, because I have not been told anything,” Stacy Fulgenzi said. “Obviously, this is my community. This is something I’ve worked for. So, of course, I would love there to be a future.”

For now, though, the Lady Cardinals can bask in the glow of a state championship, knowing they did it for Stacy.

This issue was disclosed, it was the Stacy's bypassing the school administration when they gave the cancer patient the money directly, thus preventing the administration a chance to take credit, that prompted this stupid suspension.