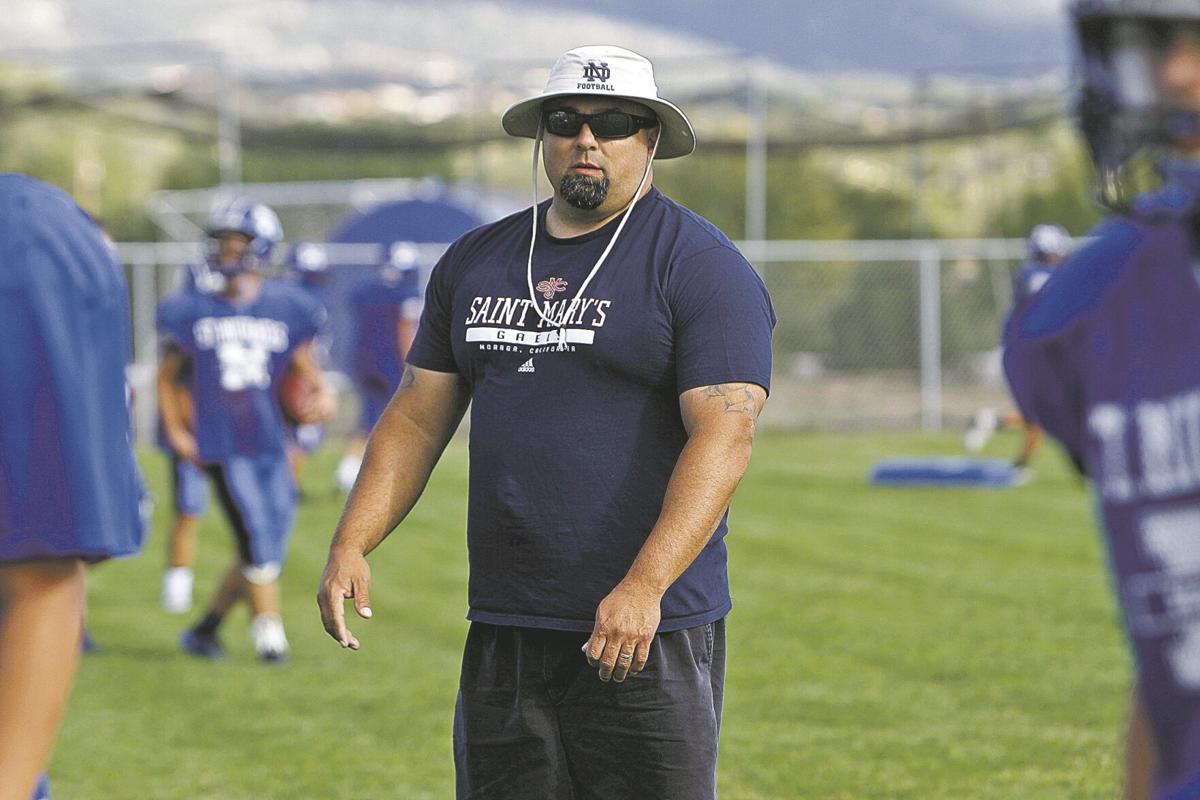 Joaquin Garcia, shown in 2014 when he was part of St. Michael’s program, has applied to be coach of Capitol’s football team. 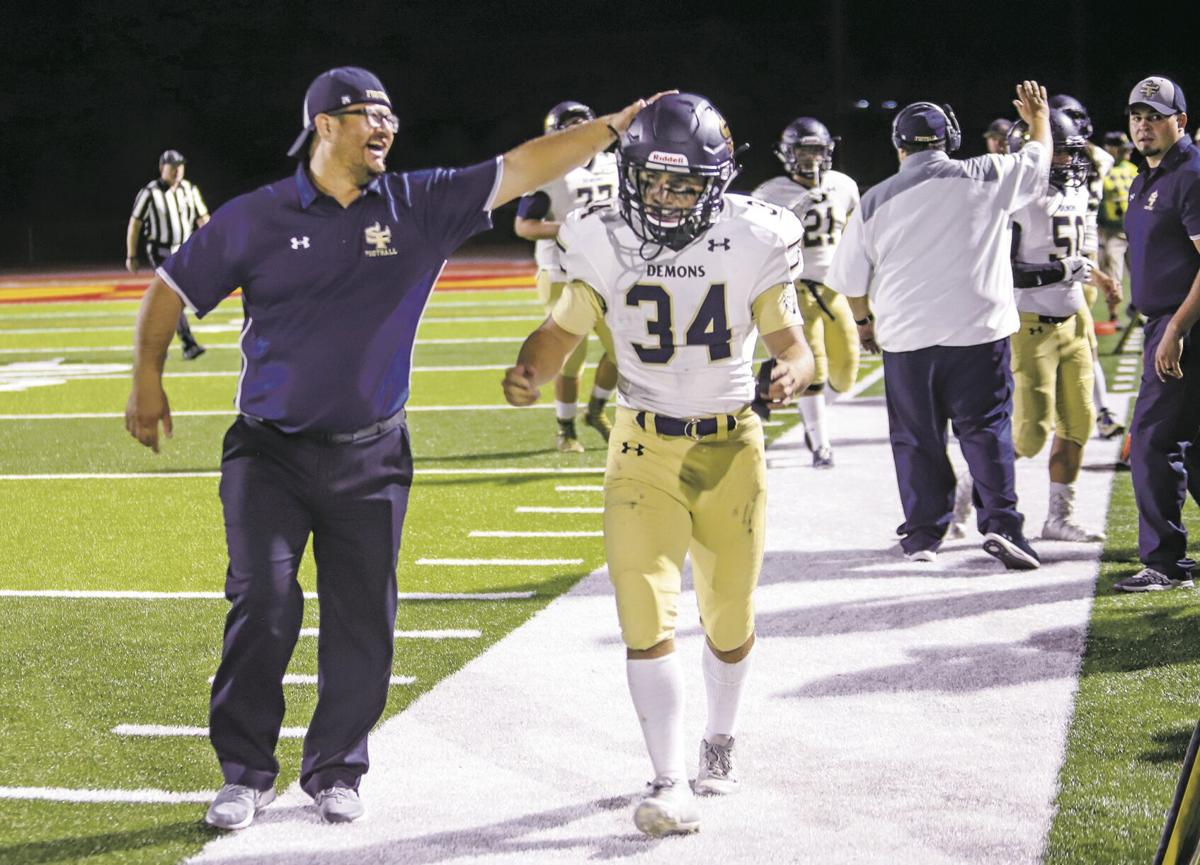 Assistant coach Joe Ray Anaya congratulates Tilman Conway after a successful play during a 2018 game against Española Valley. Anaya has applied to be coach of Capitol's football team.

Joaquin Garcia, shown in 2014 when he was part of St. Michael’s program, has applied to be coach of Capitol’s football team.

Assistant coach Joe Ray Anaya congratulates Tilman Conway after a successful play during a 2018 game against Española Valley. Anaya has applied to be coach of Capitol's football team.

The suitors for the recently opened football coach position at Capital High School have a familiar theme.

Of the seven applicants who received interviews for the job, which opened when Bill Moon resigned in late May after nine seasons, four of them have ties to the program and the school.

The other applicants for the position are:

Capital athletic director Charlie Bernert said interviews were completed last week and an announcement of a new hire should come in the next couple of weeks.

Garcia and Villegas both said it was the players who inspired them to apply. They both pointed to their hard work and dedication to the sport as assets the program established under Moon, who was in his second tenure at the school. Garcia, who was the head coach at West Las Vegas from 2000-01, coached the running backs and linebackers over the past two years.

“They are tough kids and hard workers,” Garcia said. “That was something evident from my first year there through the [coronavirus] pandemic year [of 2021]. Through all of that, they kept working hard and they kept doing what they have to do.”

Villegas filled a variety of roles over the last eight years, from junior varsity coach to coach of Ortiz Middle School from 2016-18 to help strengthen numbers for the high school program. After struggling with roster sizes in the low 40s, Capital grew the program to more than 60 prior to the pandemic.

He said his experiences as a businessman and a coach helped make him a strong candidate for the position.

“We first started the youth league eight years ago to make Santa Fe Public Schools better and more competitive at a higher level,” Villegas said. “The schools have really flourished from it.”

For Garcia, he spent the past 20 years assisting at several schools, including Clovis from 2002-05, St. Michael’s from 2006-16, Santa Fe High in 2017 and at Capital for the past two years. Garcia said he tried to improve himself as a coach and a person at each stop, and felt like this was the perfect opportunity for him.

His wife, Natalie Garcia, has been a long-time medical sciences teacher at Capital and encouraged him to apply for the position.

“It just felt right, Garcia said. “I have the utmost respect for coach Moon and I was planning on coming back and being an assistant.”

Overall, Moon has a 114-164-1 record in 26 seasons. All seven of his playoff appearances came at Capital. The Jaguars went 2-2 in the shortened 2020 season played this spring due to the pandemic.

Nice article. It is going to be an up hill climb for whoever takes over the program. When one program is really good (basketball) and another is struggling (football). There is an issue with athlete sharing. There is a lot of talent in those hallways, problem is, coaches don't like sharing. The article says that they had over 60 football players but what about other sports. How does a 5A school have 5 or 6 boys on their entire track team. Hopefully the new coach will push their athletes to join track and a winter sport. Hopefully those other coaches will be working with the new coach with athlete sharing.

Although not mentioned by Mr. Barron, It should certainly be noted the Coach Garcia was on the coaching staff at St. Micheals during an unprecedented time in the Horsmen's sports history. In 2011-12 the Horsemen Football team went 11-1, losing to Lovington in the State Chapionship game, and in 2012-13 the Horsement Football team went 12-0, and won the State Championship.

What is not commonly known is that Coach Garcia was the Head Coach for Horsemen Wrestling. Under his guidance the Horsemen wrestlers won the State Championship in 2012-13. Coach Garcia and his staff produced many indiviual State Champions over the yeras he guided the team, likely the most under any wrestling coach in St. Michaels history.

I am Proud to say that both of my sons were a part of those experiences, with Coach Garcia playing a significant role in an incredible high school experience.

Good Luck Coach, our family hope you receive an opportuinity to further influence young people in our community.