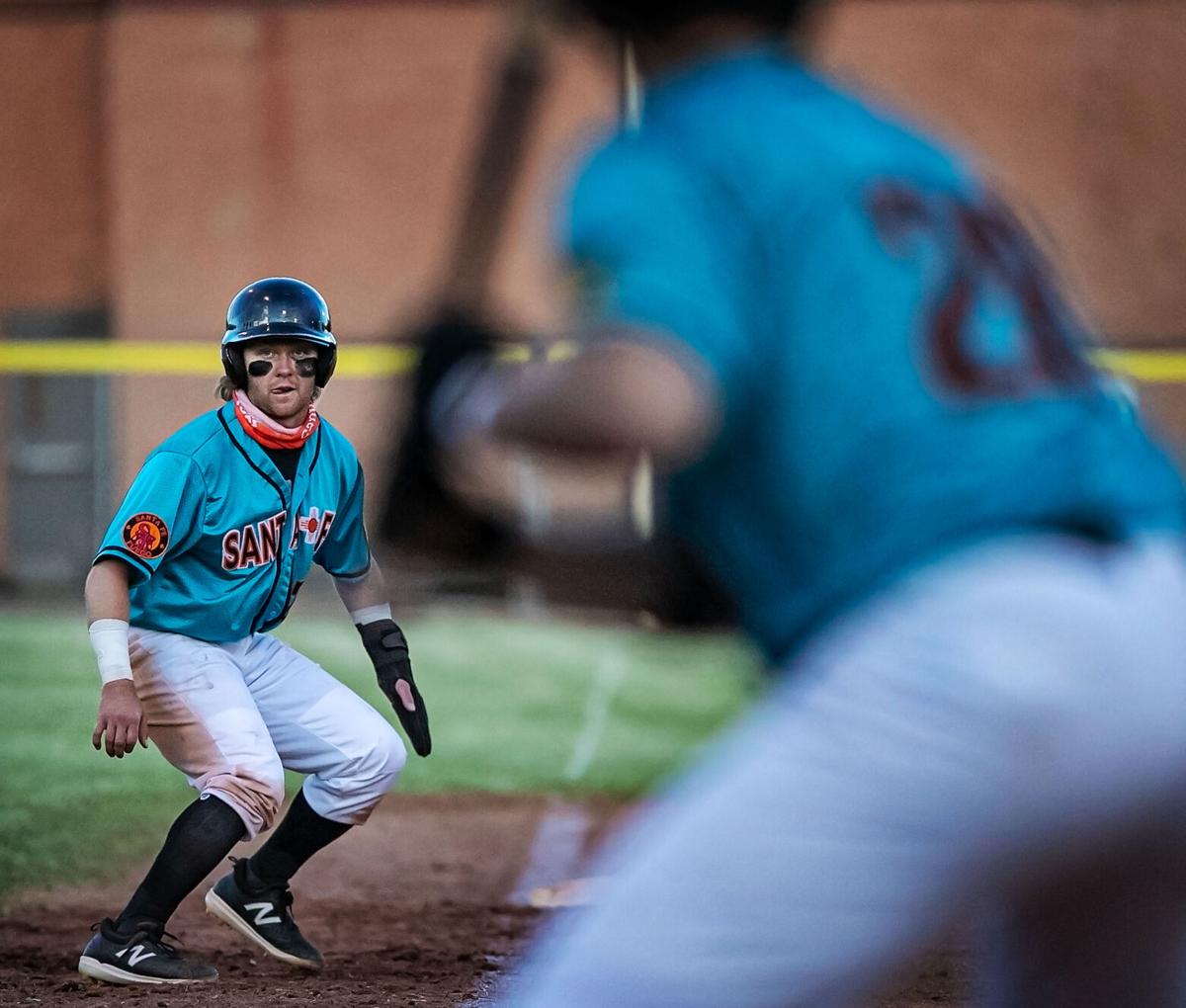 Declan Peterson leads off third base during the Santa Fe Fuego home opener against the Roswell Invaders on June 4 at Fort Marcy Park. As a youth, Peterson was severely injured by a bat thrown into the stands by a player during a 2004 MLB spring training game in Florida. He was treated for multiple skull fractures, and after he got out of the hospital, developed a passion for playing baseball. 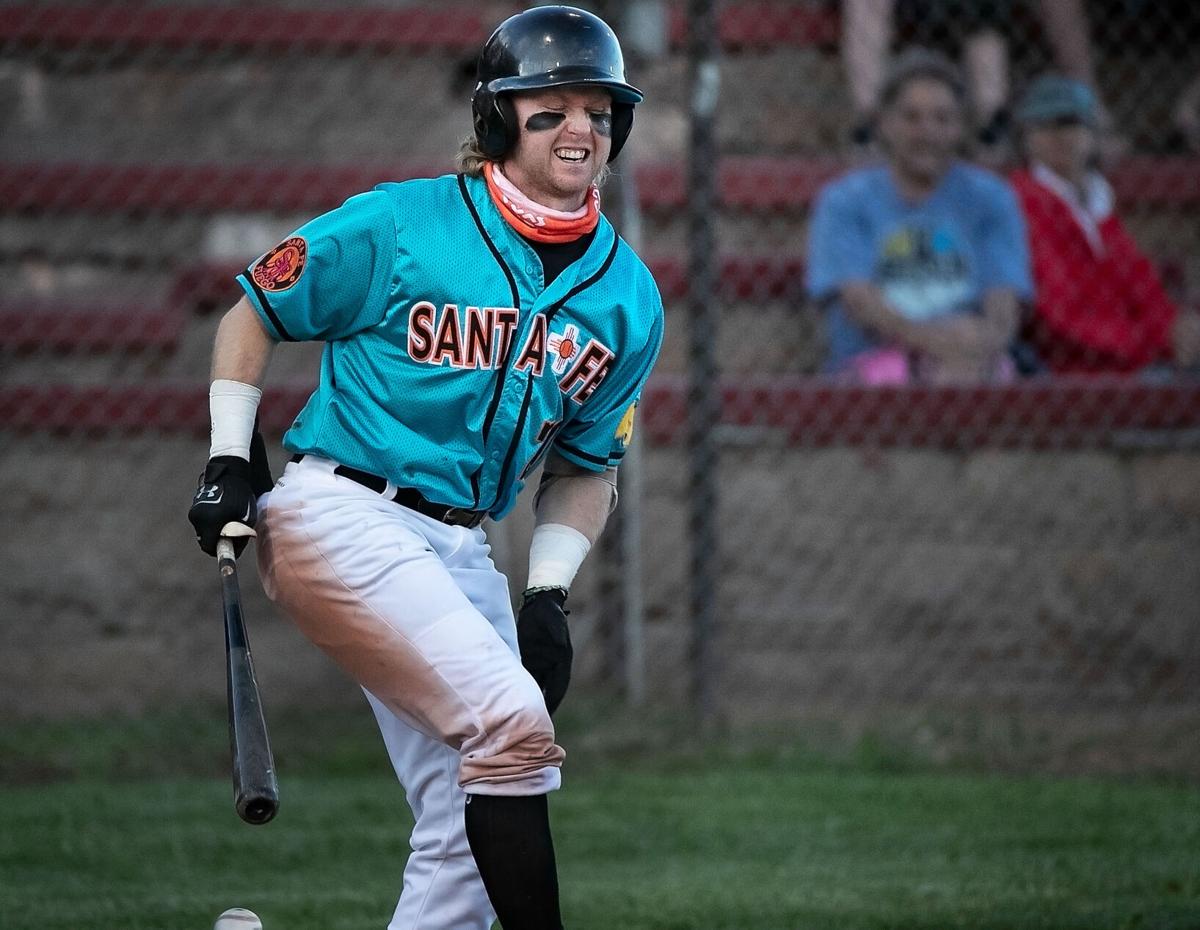 Declan Peterson reacts after getting hit by a pitch during the Santa Fe Fuego’s home opener June 4 against the Roswell Invaders at Fort Marcy Park. At age 5, he suffered multiple skull fractures from a thrown bat at an MLB spring training game in Florida. After other similar incidents, MLB eventually installed protective netting in ballparks.

Declan Peterson leads off third base during the Santa Fe Fuego home opener against the Roswell Invaders on June 4 at Fort Marcy Park. As a youth, Peterson was severely injured by a bat thrown into the stands by a player during a 2004 MLB spring training game in Florida. He was treated for multiple skull fractures, and after he got out of the hospital, developed a passion for playing baseball.

Declan Peterson reacts after getting hit by a pitch during the Santa Fe Fuego’s home opener June 4 against the Roswell Invaders at Fort Marcy Park. At age 5, he suffered multiple skull fractures from a thrown bat at an MLB spring training game in Florida. After other similar incidents, MLB eventually installed protective netting in ballparks.

While some of the memories have been surrendered to the ether of time, a little boy’s visual of a heavy wooden bat helicoptering its way toward his face is forever preserved in a slo-mo loop.

It was 2004 and 5-year-old Declan Peterson was counting down the hours to his first day of school when, during a spring training game with his cousin and grandparents in Florida, he was nearly killed by a wayward bat tossed into the stands during a Twins-Red Sox game. He suffered multiple skull fractures, lost 20/20 vision in one eye, and was forced to take a year off from sports.

During his hospitalization, the doctors told his mother, Elaine, there was nothing more they could do for him. They told his father, Edward, that he may suffer permanent damage in one form or another.

As crazy as it sounds, it may have been the best thing that ever happened to Declan.

“I was drinking a soda with my cousin on the third-base side when I saw this thing flying right at me,” Peterson says. “I remember being really into golf when I was a kid, but after that it started this lifelong love of baseball for some reason. It’s been my focus ever since. I guess it knocked some sense into me one way or another.”

Seventeen years later, Peterson was served up a healthy reminder of how dangerous baseball can be. Just hours before his professional debut as the starting second baseman for the Santa Fe Fuego, the now-22-year-old was drilled just inches below his right eye by a batted ball during batting practice at Fort Marcy Ballpark. It left a golf ball-sized welt near his cheekbone, but it — just like the incident in his youth — only strengthened his resolve to be on a baseball diamond.

“The kid’s a fighter, always has been,” Edward Peterson mumbled as he leaned forward on Fort Marcy’s concrete steps for a better view of his son during a game last week. “Anytime he gets hurt, it’s rub two Advil on it.”

Edward, Elaine and Declan’s teenage brother, Dylan, made a 23-hour drive from their northern Illinois home to see Declan’s latest step in a baseball journey. It took him from the Chicago suburbs to a pair of NCAA Division III schools, one in Chicago and the other in Steubenville, Ohio.

Of all the places he thought he’d wind up, Santa Fe was probably near the bottom.

Like many players who meander into the Pecos League, Peterson had never been to New Mexico let alone heard of the Fuego. The only thing he knew is he wanted to keep playing ball, to keep hanging onto the dream he started having when laying in a Florida hospital room all those years ago.

With his eye swollen shut and his skull puffy and painful, Peterson got a bedside visit from Red Sox owner John Henry. Just moments before someone in the room had handed Peterson a package of baseball cards, giving him enough time to thumb through the pictures as Henry asked him a question.

“He wanted to know if I had a favorite player and I just happened to be holding a Curt Schilling card,” Peterson says. “I didn’t even know who Curt Schilling was.”

Henry obliged. Having traded for Schilling — who, by the way, went on to bloody sock fame a few months later against the despised Yankees in the American League Championship Series — Henry had his star pitcher sign a jersey and a hat that the team presented to the family.

Peterson also got the bat, which came off the hands of Michael Sandoval, the younger brother of current big leaguer Pablo “Kung Fu Panda” Sandoval.

Peterson has since reached out to Sandoval on social media and written about his incident a few times for school-related projects. By connecting with Sandoval, Peterson got a chance to tell him that the years had been good to him, that there was no reason for remorse or guilt.

It was incidents like his that eventually led to mandatory netting at all major league parks, protective screens that have saved countless people from visits to the emergency room.

Peterson likes to tell people that the nightmare moment he had as a kid was actually a blessing. He jokes that his grandfather, whom he calls PopPop, got the worst of it. The two were sitting next to one another when Sandoval dug in.

“We went to a pool a few days later and my dad takes off his shirt, and there’s this long purple bruise across his middle,” Elaine Peterson says. “Oh my gosh, so many memories I’ve kind of forgotten about just sort of come back up now that I’m thinking about it.”

Pausing to watch her son walk toward the plate after getting introduced by the Fort Marcy public address announcer, she gets a little choked up when choosing her next words.

“But look at him now, he’s still playing and he’s happier than ever,” she says. “He became a professional baseball player and it all started with a trip to the hospital.”

Peterson’s a realist when it comes to his time in the game. As a middle infielder in college at Concordia (Chicago) and then Franciscan University, he only hit one home run, forging a reputation as a Los Angeles Angels David Fletcher type; slap hitter with deceptive speed and a rock-solid glove.

Entering Saturday night’s game against Trinidad, he was batting .323 with three homers and a .967 fielding percentage on the unforgiving bumpy infields of the Pecos League.

“Being in this league, the long road trips, the long hours and sometimes not getting enough sleep or decent food, it tests you,” Peterson says. “It really makes you look at how much you want to be here. Me, I love it. I want this. I’m not sure how long it’s going to last but, you know, I’m having fun with it while I can.”

For a kid whose introduction to the sport wasn’t exactly a tiptoe through the tulips, it’s a match made in heaven.

Will, a great write-up about Declan Peterson. I watch the guy "every night" at Marcy Park. He plays hard. Thanks for bringing out his back story. Paco