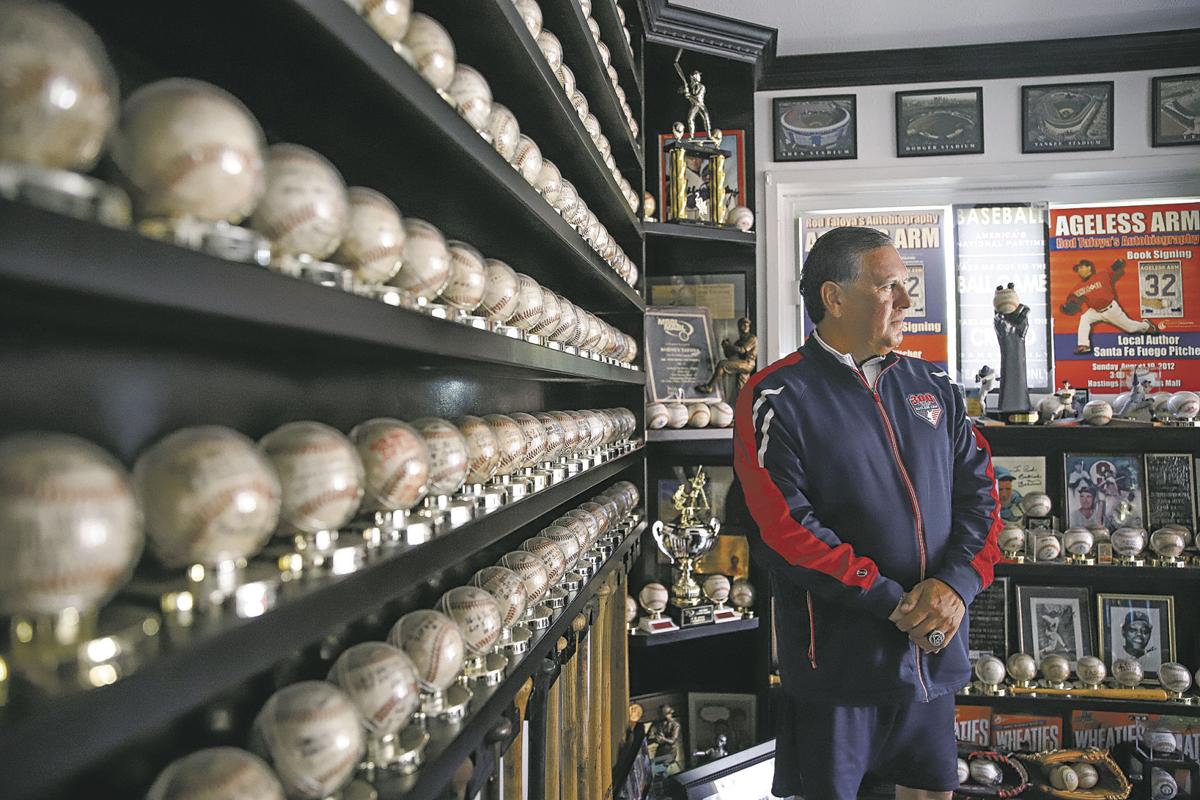 Rodney Tafoya stands beside rows of baseballs from games he has played in alongside trophies and memorabilia he has collected. Tafoya has won more than 350 games in his semipro career, and with playing high school ball at St. Michael’s and in college, he counts 448 wins. 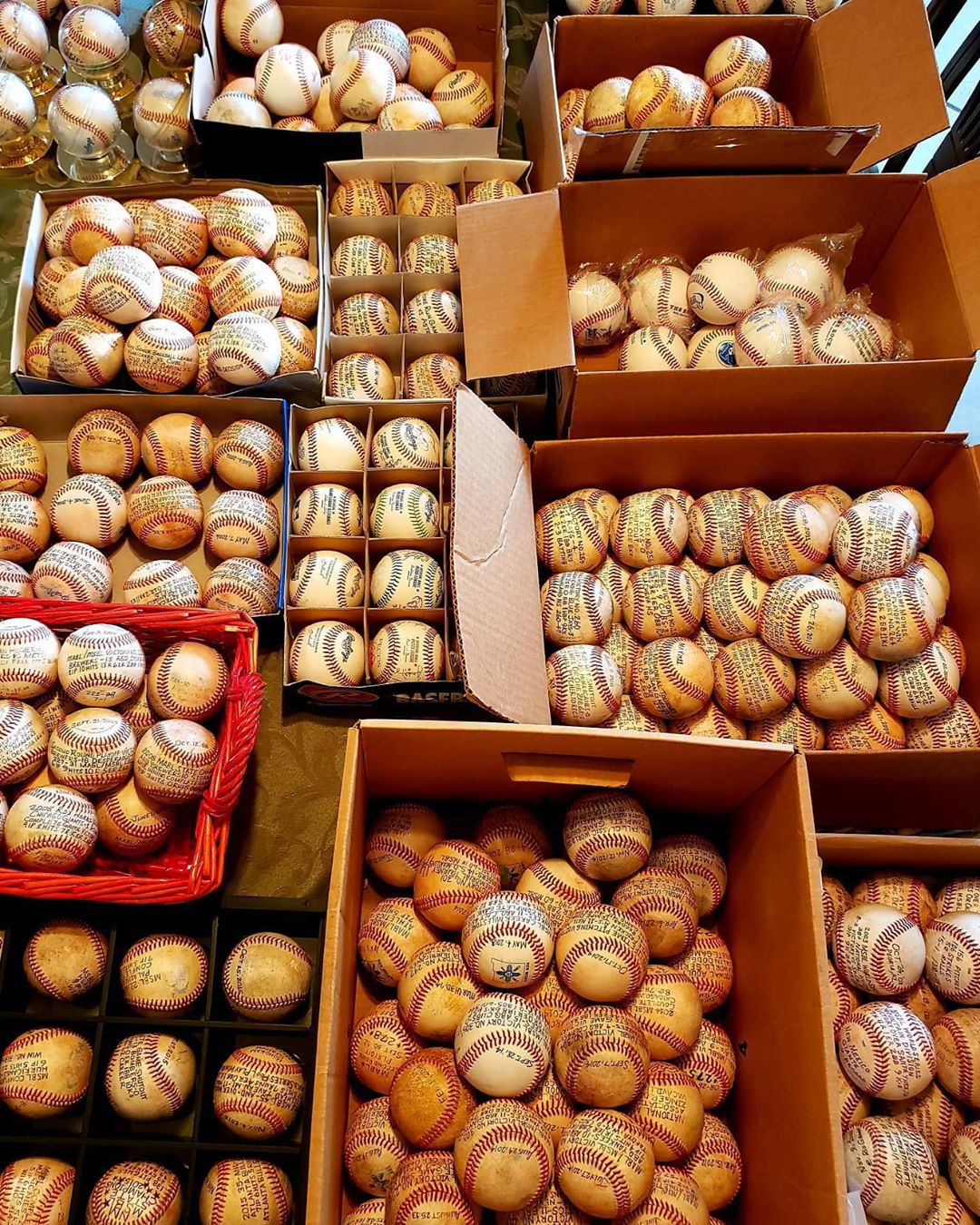 Rodney Tafoya has scores of baseballs marked with the date, score, team and other details of his pursuit of 500 wins. During the lockdown of the coronavirus pandemic, he has begun documenting the backstory to all those baseballs. 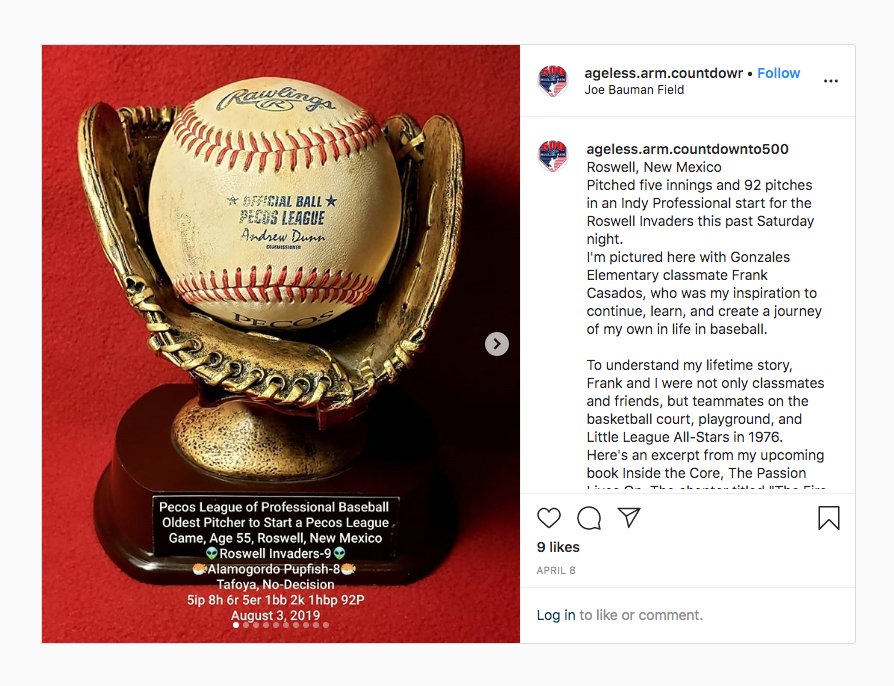 Rodney Tafoya cataloged a ball from a Pecos League game he won in August as a member of the Roswell Invaders. 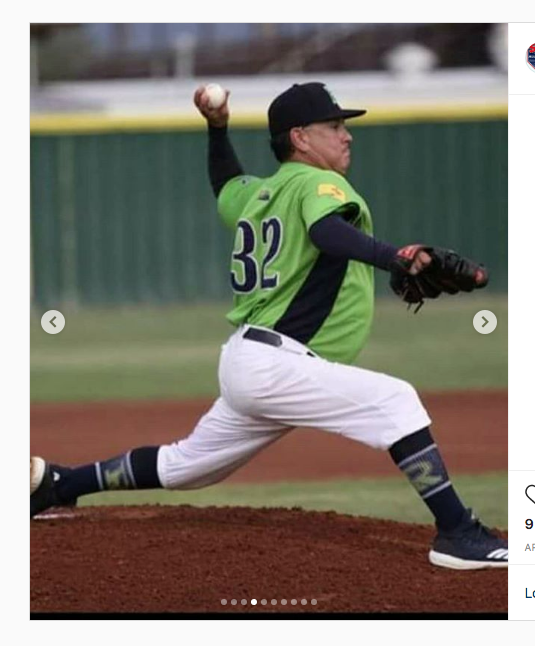 Rodney Tafoya pitching in August with the Roswell Invaders.

Rodney Tafoya stands beside rows of baseballs from games he has played in alongside trophies and memorabilia he has collected. Tafoya has won more than 350 games in his semipro career, and with playing high school ball at St. Michael’s and in college, he counts 448 wins.

Rodney Tafoya has scores of baseballs marked with the date, score, team and other details of his pursuit of 500 wins. During the lockdown of the coronavirus pandemic, he has begun documenting the backstory to all those baseballs.

Rodney Tafoya cataloged a ball from a Pecos League game he won in August as a member of the Roswell Invaders.

Rodney Tafoya pitching in August with the Roswell Invaders.

There was only so much walking Rodney Tafoya could do before he had to find something else to do with his time during lockdown caused by the coronavirus pandemic.

Normally, the 55-year-old St. Michael’s graduate would be working out and preparing for his next start in Albuquerque’s Men’s Adult Baseball or Men’s Senior Baseball leagues, continuing his quest for 500 wins. Tafoya reached 448 wins in early March on the opening day of the Men’s Senior Baseball League Kickoff Classic in Las Vegas, Nev.

But with the spread of the COVID-19 virus putting a halt to almost every aspect of the sports world, Tafoya was like many other weekend warriors — impatiently counting the days until he can return to the field. He got to the point that walking up to 10 miles a day was just not enough to tame his restless spirit.

He started a project with the baseballs he and his family have collected during his 40-year career as a pitcher. He has balls from when he started pitching at St. Michael’s and throughout his career. Tafoya has them in a room of his downtown home that is dedicated to his career and his love of baseball.

Tafoya, dubbed the “Ageless Arm,” took to Instagram to catalog the mementos, chronicling each ball from 420 of his 448 wins and writing the backstory to some of them. It can be viewed at instagram.com/ageless.arm.countdownto500.

From the bookends of his first and last wins to his 264th win that came a day after the death of his mother, Tafoya has amassed quite the collection. He estimated he spent 180 hours on the project.

“If I had not done this during this crazy pandemic world we’re in now, this would have never been done,” Tafoya said. “It takes too much time. You’re talking about 180 hours, up until 3 or 4 in the morning every day. It takes a lot of passion, and passion can be scary.”

Tafoya said that he didn’t intend to make a scrapbook of his baseball career when he was with the Horsemen, but it materialized, thanks to his efforts and the efforts of his mother, Maude Tafoya, and his brother, Jack.

It’s a path that led Rodney Tafoya to New Mexico Highlands University in Las Vegas, N.M.; to Newman University in Wichita, Kans.; to the independent Mexican, Pioneer, Prairie and Pecos leagues; and countless semi-pro tournaments nationwide and around the world.

And with every stop, there is a story.

Like the time Rodney threw a no-hit, 18-strikeout, seven-inning gem that would have been a perfect game if not for a full-count walk in the fifth inning. That was July 24, 2004. Tafoya recalled the umpire, a sheriff, coming to the bank he worked at and apologizing for blowing the call.

Or win No. 264, which Tafoya remembers vividly. Maude Tafoya was battling pancreatic cancer, had fallen and was confined to a bed and a couch. Rodney Tafoya said the morning she passed away, he heard her breathing become shallow and eventually stop. One of the last things she told her son was to keep pitching that weekend. The following day, he threw a nine-inning complete game, allowing three earned runs and struck out 11 in an 8-6 win in a MALB game in Albuquerque.

Tafoya said cataloging and writing about that ball now brought back a flood of emotions and tears that were as raw as they day she died.

Tafoya said there were a lot of laughs, tears and wonderment.

“I went through a whole lifetime of emotions that you could think of,” Tafoya said.

The ball the pitcher collected for win No. 232 was one for the ages. He started and won two games in the Puerto Rican Caribbean Winter Tournament, throwing 222 pitches.

Tafoya remembers taking a Vicodin in between games and throwing up just before his second start.

The downside of that performance was that he tore his rotator cuff and didn’t pitch for five months.

Then there was the meeting with the Cincinnati Reds former player and manager Pete Rose during a convention last month, just before Tafoya won his 448th game in Las Vegas, Nev. Tafoya brought baseball’s “Hit King” a poster he had of Rose with the Reds in the 1960s. When he greeted Major League Baseball’s all-time hits leader, Rose recognized him immediately, Tafoya said.

“He goes, ‘Ageless Arm, where are you at?’ ” Tafoya said, not making the connection that Rose was inquiring about his pursuit of 500 wins and the record of 511 wins, the Major League mark owned by Cy Young.

After the work Tafoya put in over the past three weeks, Rose and the rest of the world can learn a whole lot more about the Ageless Arm.

What a heart-breaker to miss a perfect game on an umpire's blown call!!

What a wonderful story!!

I would like to meet Mr. Tafoya and see his collection of baseballs and scrapbooks.

Pitching two games in one day is called "The Iron Man Stunt".

Very few pitchers in all of organized baseball have performed the Iron Man Stunt.

My father, Joseph Woodrow Garrison, did it in the old Central New Mexico League in the mid-1930's. Teams in the CNML were the Santa Fe Clossons, the Albuquerque Chiefs, the Madrid Miners, the Mountainair Mustangs, the Terrero Miners, the Las Vegas Dons and some others I don't remember. In Santa Fe, they played at Majers Field.

The New Mexican did a Sunday feature story back in 1984-1986 about the old Central NM League, a Santa Fe man who was a catcher for the SF Clossons and my Dad. The story was bannered on the front page and the lead in the Sports Section. Maybe you might still have that article in your newspaper "morgue".

How wonderful that Pete Rose recognized and knows who Mr. Tafoya is and what he has done!!

Thanks, for publishing this story, SF New Mexican!!