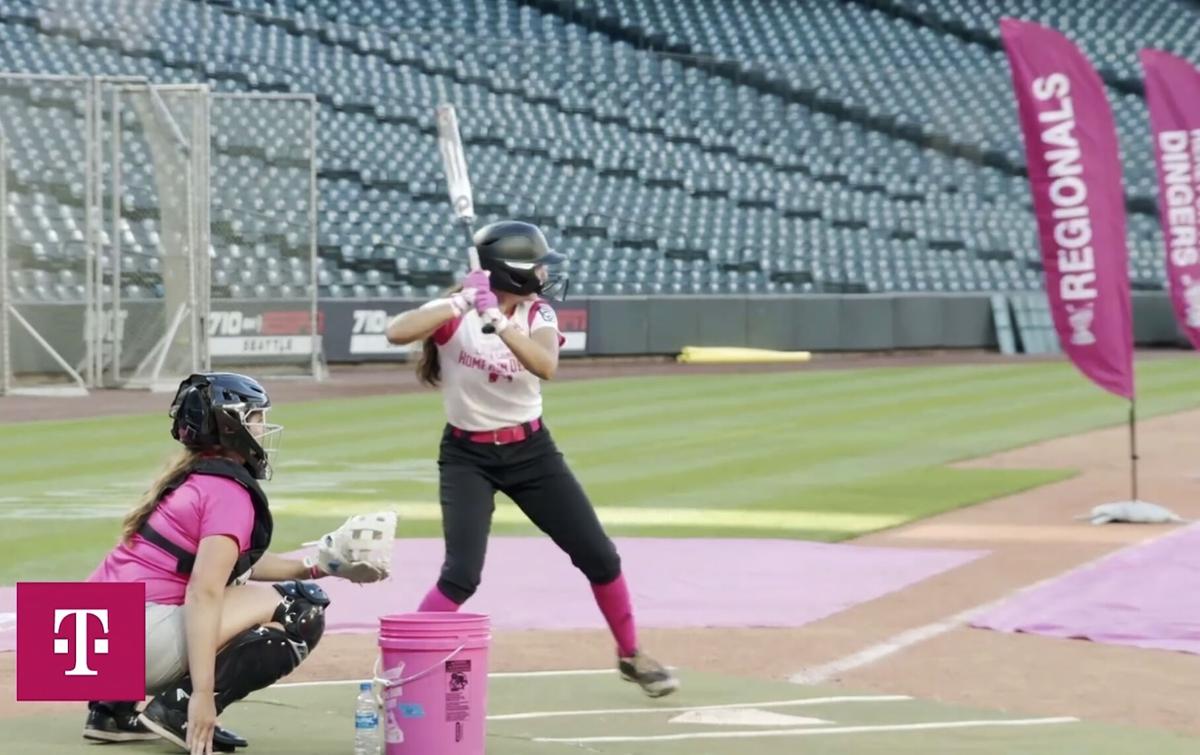 Go ahead and etch Jaslene Ramirez’s name into the history books.

The 12-year-old, who was part of the state championship softball team made up of SFLL All-Stars, rolled roughshod through the final two rounds of Sunday’s competition, held immediately after the Seattle Mariners beat the Oakland Athletics with all the participants and their families in attendance.

She and SFLL baseball All-Star Darrell Carbajal were invited to Seattle to take part in the competition, which featured the top 10 sluggers in baseball and softball from west of the Mississippi River.

Carbajal used the same wood bat he used all season. He had a solid showing with six home runs in the first round, but it wasn’t good enough to advance. Each hitter had 90 seconds to hit as many home runs over a 170-foot temporary fence that stood just beyond the infield dirt on the Mariners’ field.

The fences were brought in to 130 feet for softball. Most of the hitters struggled through the first round but Ramirez managed to hit three balls out to earn a spot in the second round. She hit only one dinger in that round, but it was again enough to advance.

She put on the show of the day in the third round, the semifinals. She launched eight balls over the fence, drawing the praise of the stadium’s public address announcer.

In the finals she batted second. The first hitter had just one long ball in 90 seconds. Ramirez needed just two to clinch it.

She hit her first on the first pitch of the finals, then went deep just a few moments later to end it with more than a minute left on the clock. The first people to congratulate her were Carbajal and Albuquerque’s Maddox Gonzales, a product of Roadrunner Little League who made it to the second round of the baseball event.

The Little League World Series runs Aug. 19-29 in Williamsport, Pa. Ramirez will go head to head against the winner of the T-Mobile East Regional derby.

Calling all people from Santa Fe: Your presence is requested for the upcoming New Mexico Sports Hall of Fame induction ceremony in Albuquerque. The deadline for securing a $75 spot is 5 p.m. Friday.

The man known as “Nick the Stick” or “The Gentle Giant” was a member of the fabled Mighty Midgets boys basketball team from St. Michael’s. A 7-footer, he later played at Kansas State and had a brief professional career before returning to Santa Fe and starting an insurance agency.

The Hall will also honor former Santa Fe High wrestling coach Mike Lujan. He will receive the Award of Distinction, a tribute to a man who has spent his entire adult life coaching a sport that shaped hundreds of kids he worked with.

An Albuquerque native who graduated from Rio Grande, he was an assistant coach for the Demons from 1975-80, taking over as head coach in 1980. Along the way he founded the Santa Fe Junior Wrestling Program, which included the country’s first program for girls.

The wrestling room at Santa Fe High bears his name and he has been inducted into the halls of fame for New Mexico Wrestling and AAU National Wrestling.

For more information, go to the Hall’s website, nmshof.com.

The end is near for the Santa Fe Fuego.

As hot as the team was when it beat Trinidad on the Fourth of July for its eighth straight win, the Fuego have fallen apart — and fallen out of the playoff picture in the Pecos League.

The Fuego followed that winning streak with eight straight losses and L’s in 11 of 12 games. The dropped from second place in the Mountain Division to sole possession of last place. Only the top two teams in each division advance to the playoffs and, as of Sunday, Santa Fe was technically still alive.

Tucson has the division wrapped up and is in line to host the best-of-three divisional round in early August. Tied for second were Alpine and Roswell, each 21/2 games in front of the Fuego. Just eight games remain in the regular season, all of them against division rivals.

It’s not impossible the Fuego turn things around, but it’s not likely. So unlikely, in fact, the Pecos League published a Facebook post last week saying the first-round playoff series would be Tucson and Alpine.

As of Sunday night, the league’s website had those teams on the schedule for the postseason opener Aug. 4.

Even if Fuego fans still believe, the league clearly doesn’t. Same for you, Roswell.

Jaslene Ramirez, a 12-year-old rising seventh grader who will attend St. Michael’s Middle School, said she felt at ease for the third round and finals, which were her best rounds of the event.

Awesome!!! Congratulations to the both of these kids. Great job!

Excellent. she should give the SM softball program a boost. I wouldn't doubt if she starts varsity as a seventh grader.