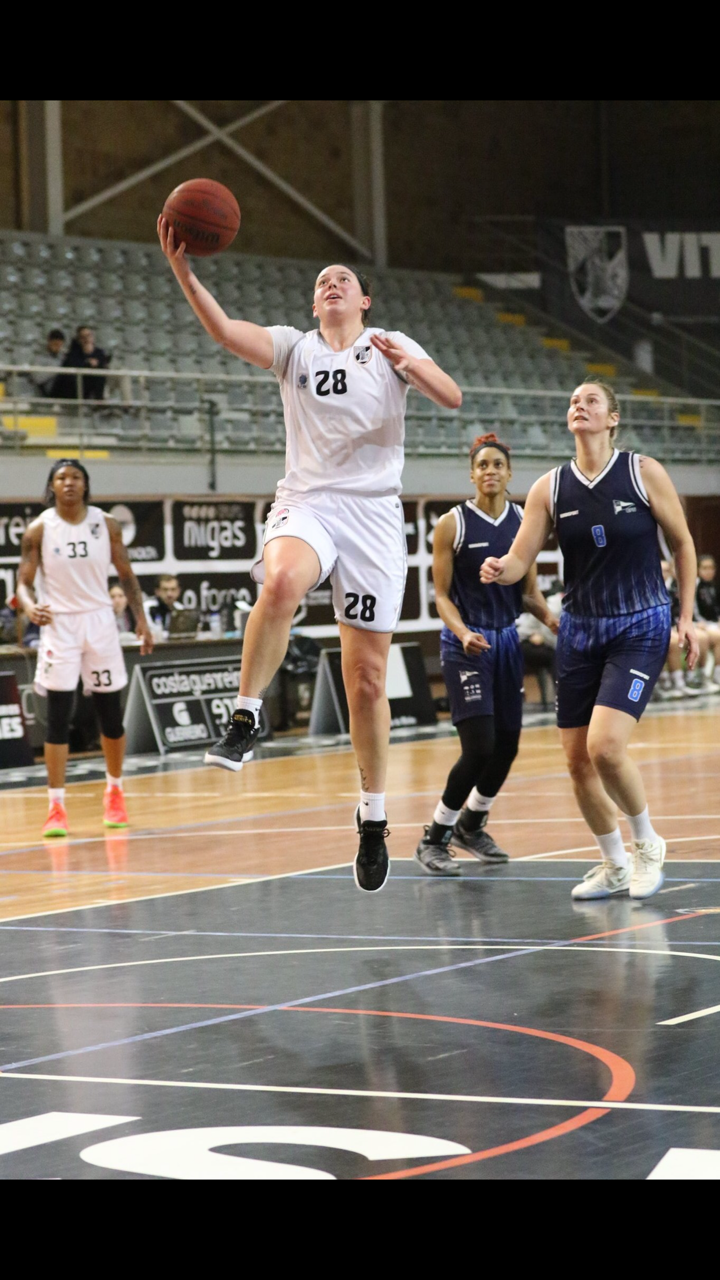 Sabrina Lozada-Cabbage, a 2015 Santa Fe High graduate, drives to the basketball for Vitoria Sports Club during a Portuguese Basketball League game this season. Lozada-Cabbage finished her first year as a professional averaging 16.8 points and 9.4 rebounds per game. 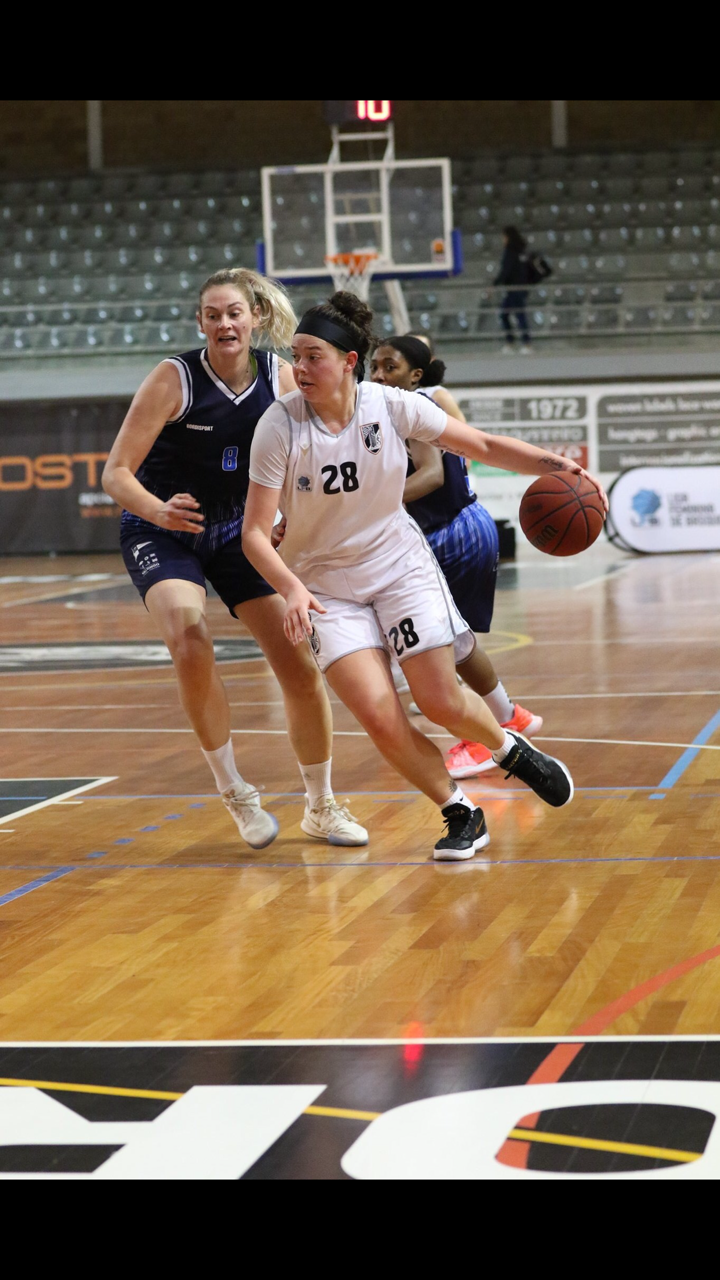 Sabrina Lozada-Cabbage, a 2015 Santa Fe High graduate, saw her take on a more prominent role for Vitoria Sports Club than what she was accustomed to at Wichita State. She led the team in scoring with a 16.8 points-per-game average. 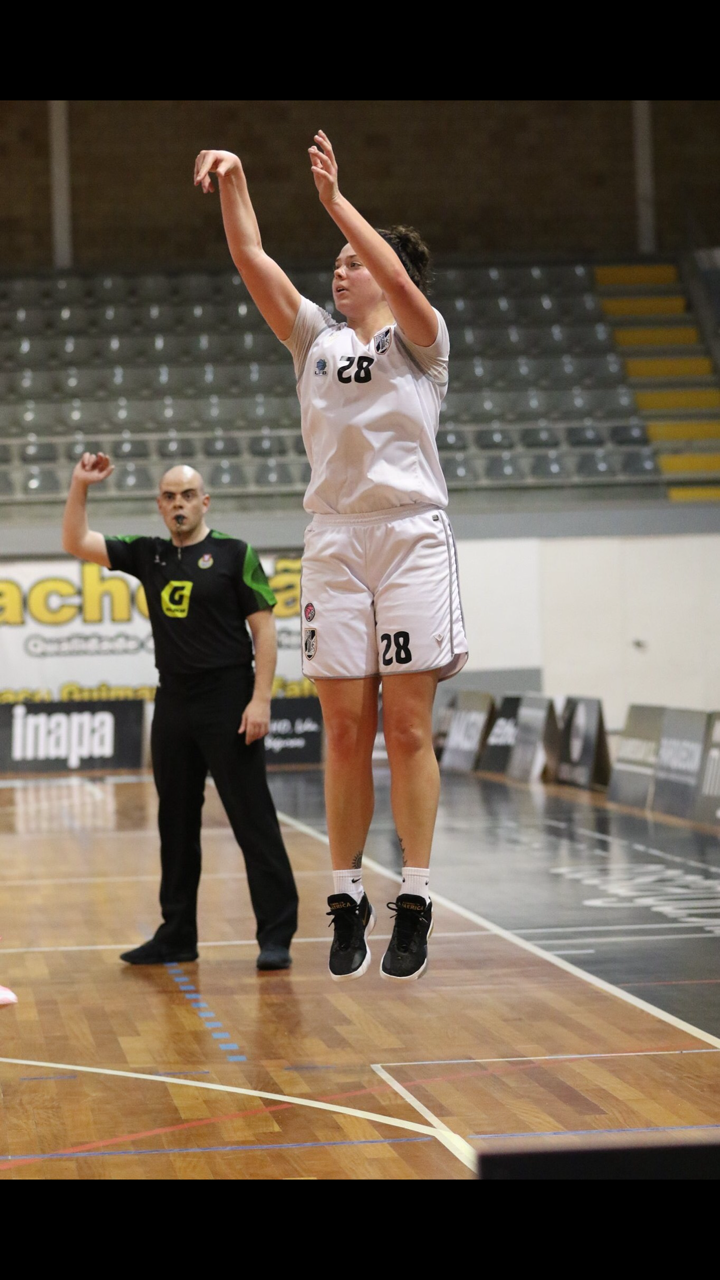 Sabrina Lozada-Cabbage, a 2015 Santa Fe High graduate, shoots a 3-pointer during a Portuguese Basketball League game. Lozada-Cabbage averaged 16.8 points and 9.4 rebounds per game before an ankle injury ended her season.

Sabrina Lozada-Cabbage, a 2015 Santa Fe High graduate, drives to the basketball for Vitoria Sports Club during a Portuguese Basketball League game this season. Lozada-Cabbage finished her first year as a professional averaging 16.8 points and 9.4 rebounds per game.

Sabrina Lozada-Cabbage, a 2015 Santa Fe High graduate, saw her take on a more prominent role for Vitoria Sports Club than what she was accustomed to at Wichita State. She led the team in scoring with a 16.8 points-per-game average.

Sabrina Lozada-Cabbage, a 2015 Santa Fe High graduate, shoots a 3-pointer during a Portuguese Basketball League game. Lozada-Cabbage averaged 16.8 points and 9.4 rebounds per game before an ankle injury ended her season.

Sabrina Lozada-Cabbage might not know Portuguese, but she knows X’s and O’s.

They were the lifeline for her professional basketball education.

Lozada-Cabbage, a 2015 Santa Fe High graduate who as a junior helped the Demonettes to the Class 4A state title, knew there would be a language barrier for her playing for Guimarães’ Vitória Sports Club in the Portuguese Basketball League. So, Lozada-

Cabbage used the buddy system when it came to listening to her head coach, Manuel Monteiro, bark instructions.

“I’d buddy up with somebody who spoke good English, and they would translate whatever he was saying,” Lozada-Cabbage said.

Sometimes, though, that wasn’t enough, so Monteiro would whip out the whiteboard and break down the play.

“Everybody knows X’s and O’s,” Lozada-

Cabbage said with a laugh.

The good news was that whatever

Cabbage. It was different from her days at Wichita State, where she was more of a role-playing big, but Lozada-Cabbage showed she was more than up for the transition.

The 6-foot-2 forward led her team in scoring (16.8 points per game) and was second in rebounds at 9.4 as Vitória went 14-8 before the COVID-19 outbreak shut the season down in March.

By then, Lozada-Cabbage was back home in Santa Fe, after a severely sprained ankle put an early end to her rookie year. Still, it was an experience she enjoyed.

“Once you got used to the practice plans and picked up on some of the words, it

was like, ‘OK, so I know what I’m doing,’ ” Lozada-Cabbage said. “It was fun. It was a challenge, but it wasn’t too bad, especially since my teammates and coaches were all very helpful. If I had a question, they answered it the best they could.”

Lozada-Cabbage got the opportunity to play professionally thanks to Shockers head coach Keitha Adams, who helped connect her with Flash Agency to represent her in April. By June, she signed a contract with Vitória and was off to Portugal by September. She learned plenty about living in Guimarães, and it involved walking.

“It was the first city in Portugal, so there is a lot of history there,” Lozada-Cabbage said. “It had an older look to it — a lot of castles, churches, cathedrals. The roads were cobblestone and we walked everywhere. We didn’t have cars, but the city was very small, so we could walk everywhere. It took 20 minutes at the most to walk somewhere.”

Lozada-Cabbage said she prepared for the season by playing in summer adult leagues and pickup games, where she honed some of the skills that made her a star at Santa Fe High. She showed an ability to play on the inside, whether it was facing the basket or posting up in the low block.

Lozada-Cabbage even showed an ability to shoot from the perimeter and drive to the basket on occasion.

And she did. Lozada-Cabbage scored 16 points to open the season in an 84-61 win over CAB Madeira and had a career-best 42-point, 19-rebound performance against CP Natacao on Dec. 15. However, her season came to an end Jan. 18 when she rolled her ankle against AD Vagos. Lozada-Cabbage thought she could play through the injury, but the club doctors cautioned she could do more damage to the ankle.

Before the injury derailed her season, Lozada-Cabbage had a chance to compete for Puerto Rico’s Olympic team (her mother and grandmother are Puerto Rican) in November while it toured Canada. She performed well enough to remain on the radar for Puerto Rico officials, but her ankle injury prevented her from competing with the team when it traveled to France for a tournament in February.

With the coronavirus pandemic halting the Tokyo Games that were scheduled for July, Lozada-Cabbage believes she has a good chance at getting healthy and competing for a spot next year. She added she is not sure what the future holds for her professional career, but she wants to keep playing.

“I’m still trying to figure out what I want to do,” Lozada-Cabbage said. “I want to keep working toward possibly playing in the Olympics. That would be wonderful.”

A bright spot amongst this virus.. Congratulations Sabrina! Way to make us proud! Keep following your dreams! Blessings..[thumbup][beam][beam]