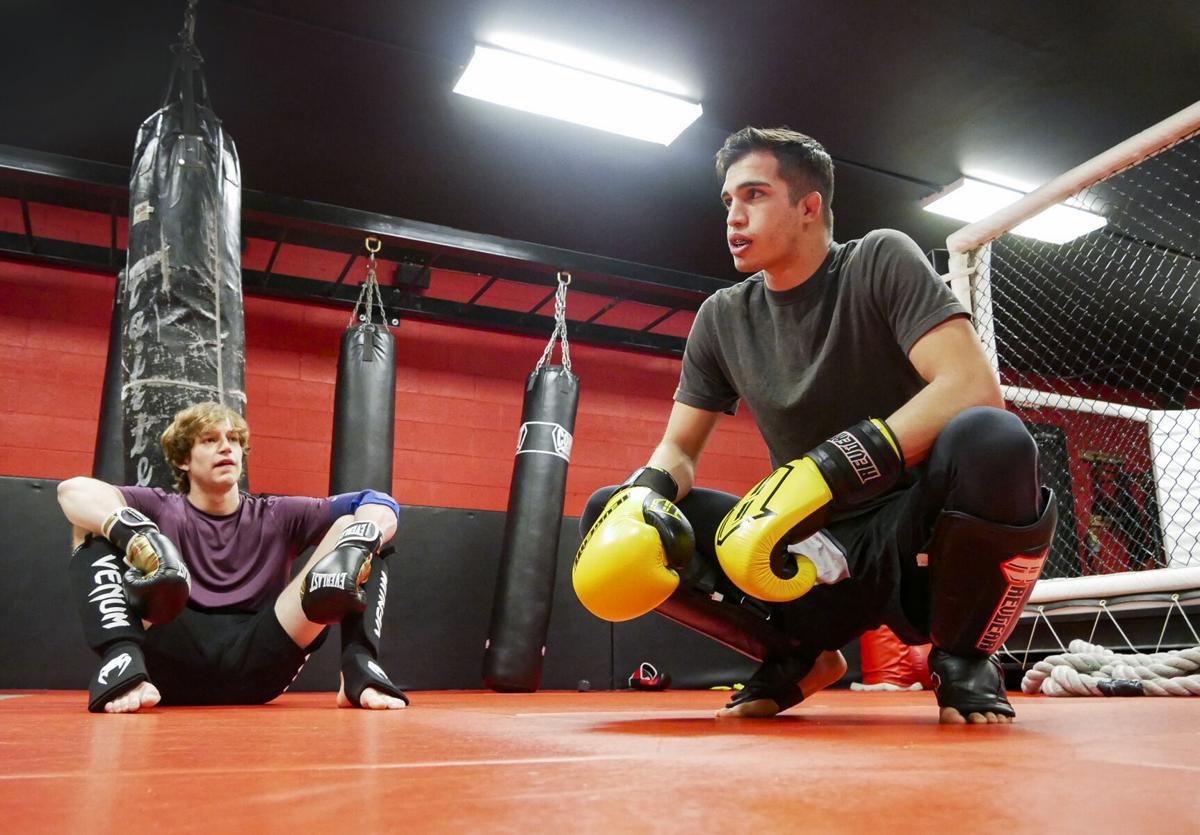 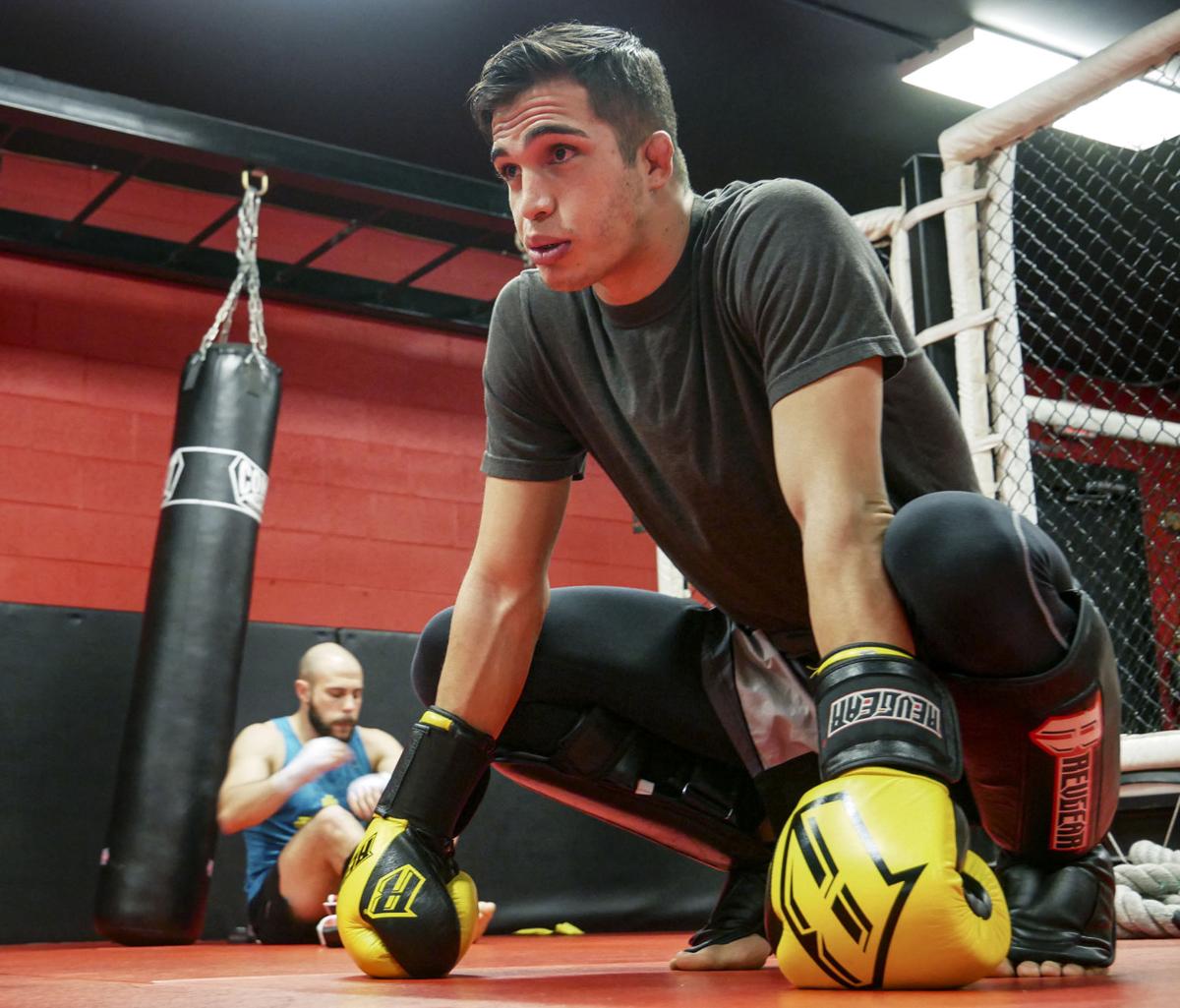 Jerome Rivera takes a break during sparring practice Feb. 4 at Santa Fe Fitness and Martial Arts. Rivera will make an appearance on Saturday’s UFC card in Las Vegas, Nev., facing Tyson Nam in a flyweight bout that will be streamed live on ESPN+ starting at 3 p.m. 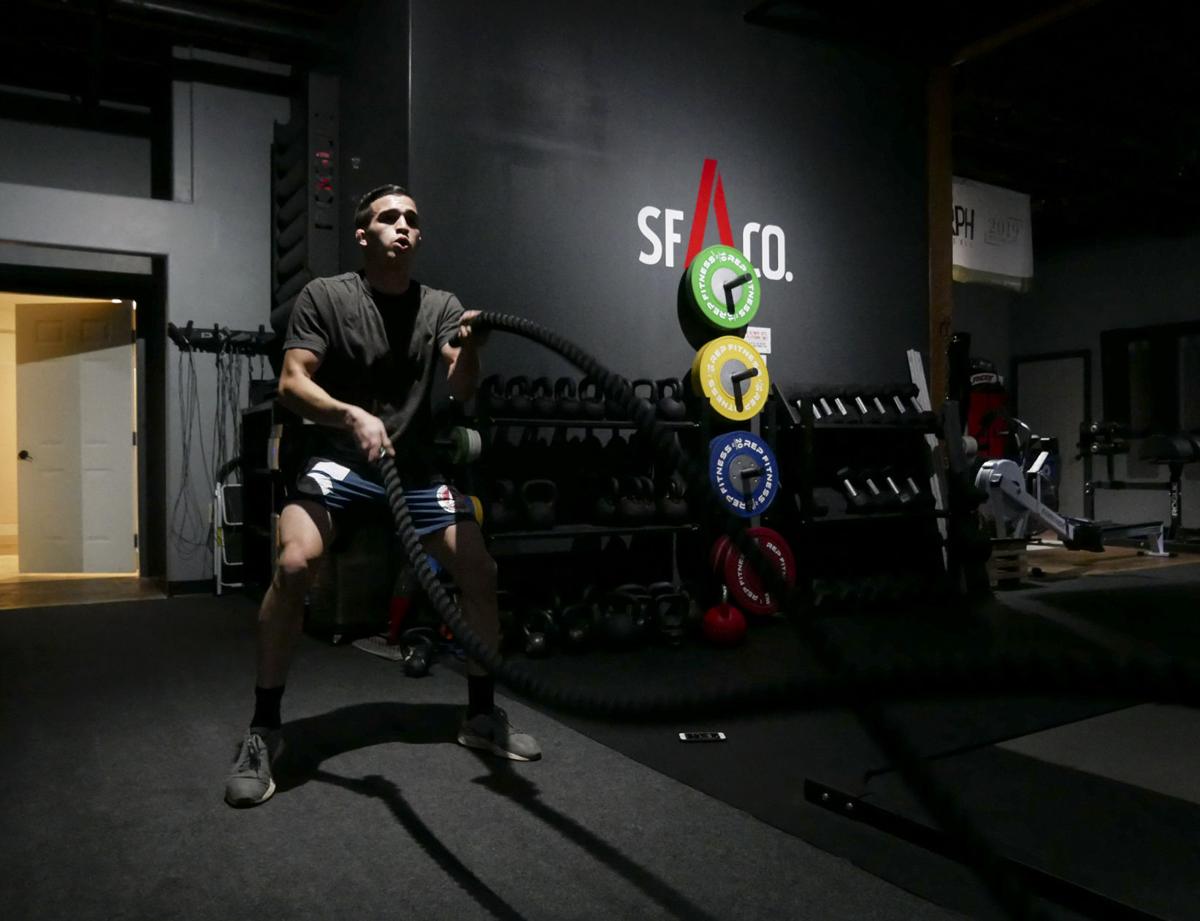 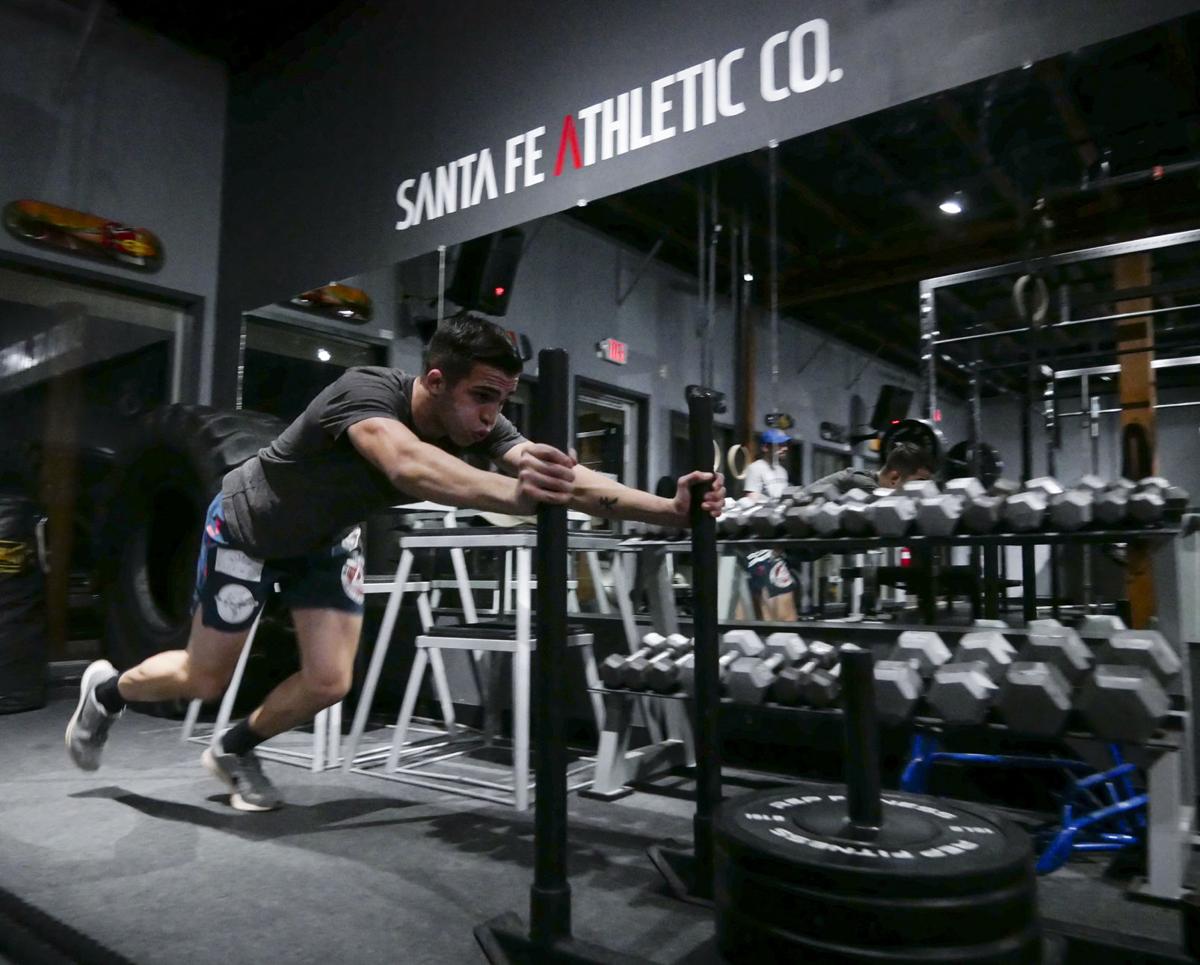 Jerome Rivera takes a break during sparring practice Feb. 4 at Santa Fe Fitness and Martial Arts. Rivera will make an appearance on Saturday’s UFC card in Las Vegas, Nev., facing Tyson Nam in a flyweight bout that will be streamed live on ESPN+ starting at 3 p.m.

Emblazoned across Jerome Rivera’s left pectoral muscle is a tattoo of torn flesh that reveals the true heart that beats inside his chest: a Zia symbol representing the state he has called home for all of his 25 years.

“I take pride in where I’m from,” Rivera says. “It’s my way of showing everyone where I come from, what place I call home.”

Born and raised in Santa Fe, Rivera is on the verge of becoming a big name in town, thanks to his exploits in the ultra-competitive world of mixed martial arts. He will make an appearance on Saturday’s UFC card in Las Vegas, Nev., facing Tyson Nam in a flyweight bout that will be streamed live on ESPN+ at 3 p.m.

It’s one of 14 bouts on a card that features fellow New Mexico-based fighters Jordan Espinosa and Donald “Cowboy” Cerrone. Cerrone is attempting to end a four-fight losing streak that includes a 40-second TKO loss to Conor McGregor in January.

Just getting to this point has been a remarkable story for Rivera, one filled with doubters, more obstacles than he can count and a grotesque injury that would have forced a career change for just about anyone else in his position.

He began to make a name for himself on MMA’s biggest stage in August with his appearance on Dana White’s Contender Series, a reality TV show that handed out contracts to the top four fighters on the show. White awarded three of them, holding the last until Sept. 11 when Rivera — a full-time employee at Santa Fe’s Home Depot — was given a four-fight deal on the UFC stage, the first of which comes this weekend.

“There’s probably six watch parties, at least, of people I work with,” Rivera said, adding that the promise of the big time isn’t quite as alluring as the potential paychecks might suggest. “Well, I didn’t give my two weeks' notice yet, so there’s that. Maybe a win gets me to switch to part time. We’ll see.”

Rivera started his MMA journey about 10 years ago when he was introduced to his current coach, Joshua Montoya. That partnership started with humble lessons about throwing a punch and taking an opponent to the mat and has become something so much more.

“He’s like a brother, a father figure and a best friend all in one,” Rivera said. “We both sacrificed a lot of time from our families to get here.”

The pair commutes two or three times a week to train at Luttrell/Yee MMA & Fitness in Albuquerque, not to mention daily workouts at three gyms around Santa Fe.

Montoya got Rivera into the ring for the first time as a sanctioned amateur in 2013, with his pro debut coming in early 2014.

“As I started this journey of being a martial artist, I had a lot of, I guess you could kind of say, doubters,” he said. “They weren’t negative, but nobody thought this was ever going to happen. Everybody was just like, ‘Oh, when are you going to stop, why are you doing this?’ Nobody took it serious.”

Rivera’s response? Keep grinding, keep showing up to the gym and never let the naysayers get the last word.

“In Santa Fe, it’s not really a city of big dreamers,” he said. “There’s not a lot of people shooting for the stars there in Santa Fe. A lot of people will get a full-time job and get content with that.”

A full-time job seemed pretty appealing just two years ago when Rivera faced the biggest challenge of all. In a fight against Brandon Royval, Royval caught Rivera’s kick just 30 seconds into the fight and bull-rushed him back into the fence. Rivera tripped just before he got there, and with the fingers of his right hand caught in the mesh, all his weight was thrown onto his right elbow, dislocating it while breaking the arm.

“When I was doing the X-rays later that night, it felt like there was just glass in my bones,” he said. “Everybody thought I was going to hang it up, my friends and my family. They were like, ‘OK, that’s a wrap on your career. You’re done.’ ”

Not even with a fiancée at home and a baby just four months away. Not even when he was told by his boss at the time not to come back until he was fully healed. Not even when he found temporary work digging wells around park trees despite having only one working arm and enduring excruciating pain.

“The thought definitely crossed my mind about quitting, but I was like, ‘No, I’m not going to do what everyone thinks I’m going to do,’ ” he said. “I’m going to persevere and keep grinding.”

Rivera had Tommy John surgery in May 2018 and returned just nine months later for what was then his ninth professional fight. He won that and the two that followed. Now 10-2 after an Aug. 4 win over Luis Rodriguez on White’s show, he is tantalizingly close to hitting it big.

“I’ve been hellbent on a mission,” Rivera said.

In retrospect, that injury may have been the best thing that ever happened to him. He was back in the ring for sparring just two months after his surgery, wrapping his bloated right arm to his torso while he did all the work with his left. It taught him a different way of seeing things, to lead with his left and be more patient.

Rivera arrived in Vegas on Tuesday and, due to COVID-19 restrictions, doesn’t plan to do much outside of his hotel room.

“I brought some sweats for some dumb reason because I thought it might be getting a little colder like it is in New Mexico but, no, it’s pretty warm out here,” Rivera said, pausing for reflection.

“I just want to leave a legacy in Santa Fe, that when my career’s over people will say that I was a tough kid,” Rivera said. “If you have structure and you’re hungry and you have good people around you, you can do anything you can put your mind to.”

Best of luck to one tough Santa Fean.

Well done young man! And way to represent Santa Fe and the 505... Best of luck to you we will be watching, praying, and cheering you on! Thank you for all your grind, effort, humbleness, and go get’em!