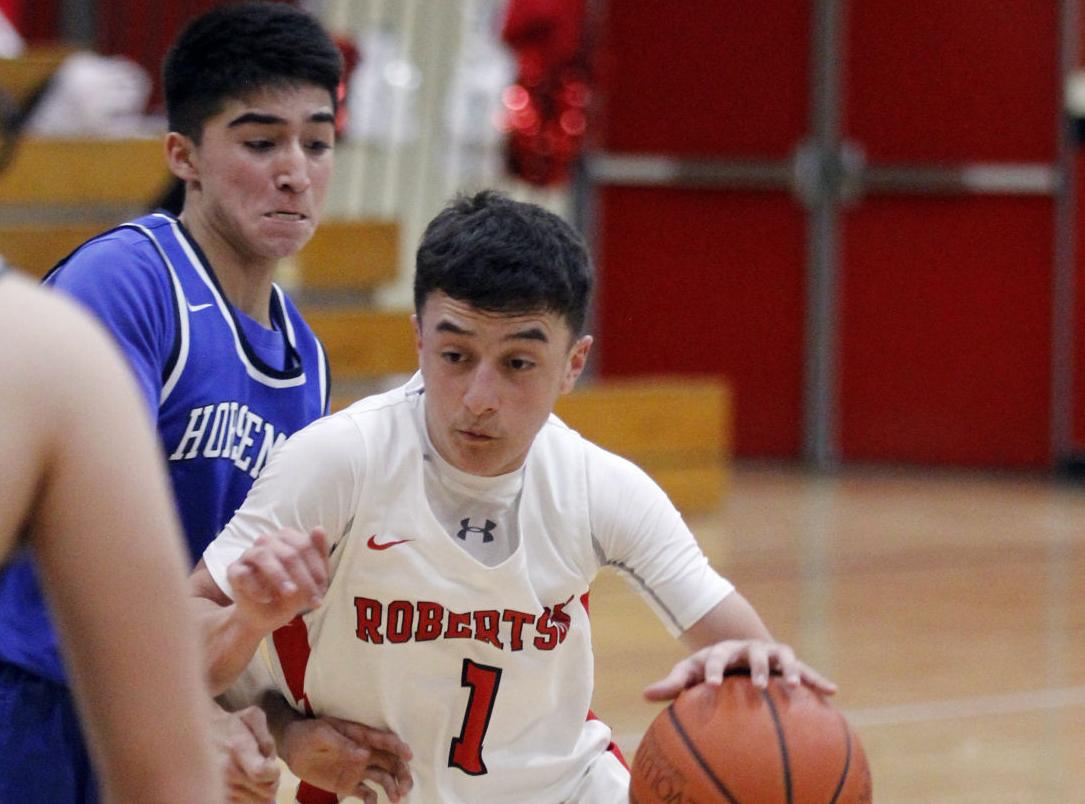 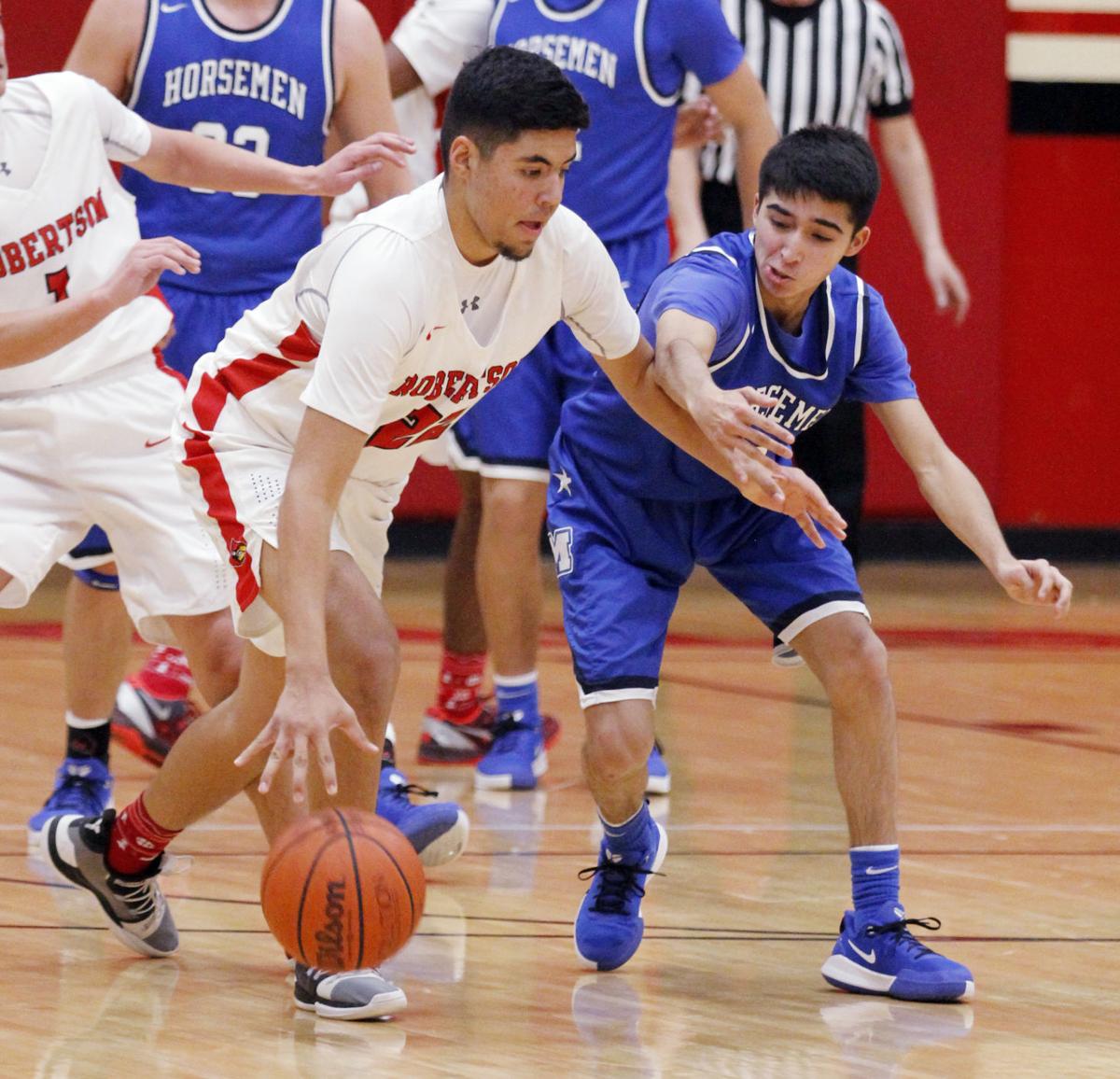 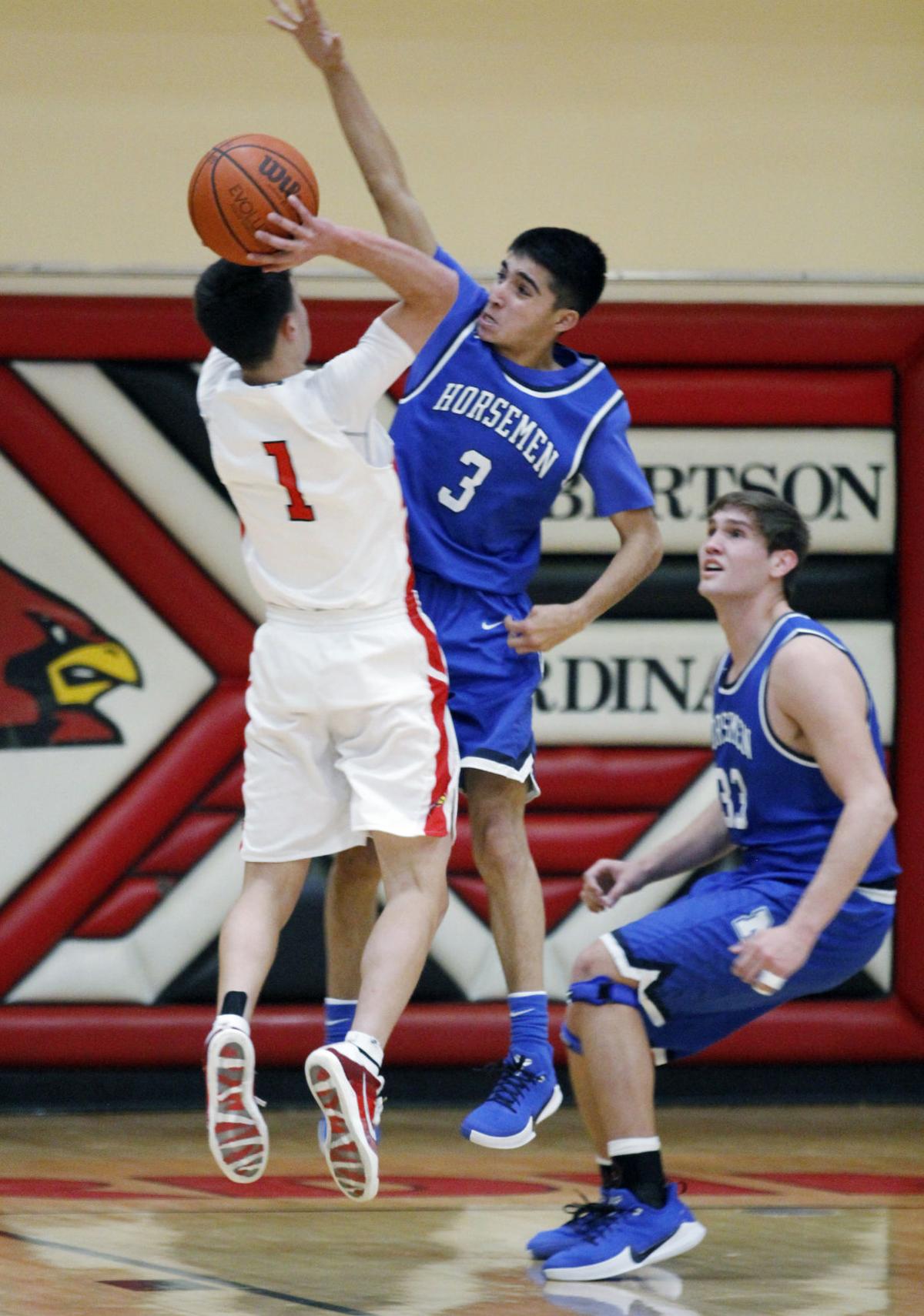 LAS VEGAS, N.M. —The conundrum that is the Las Vegas Robertson boys basketball team continues, but the future looks a lot clearer.

The Cardinals were in must-win mode coming into Friday’s District 2-3A game against district leader St. Michael’s. In a battle between Class 3A’s top two teams, according to the MaxPreps.com Freeman rankings that is used to help determine selection and seeding for the state tournament for each class, it was the top-ranked Cardinals who lived up to their standing, even if they still find themselves mired in third place in the district.

A balanced scoring effort from its starting five and a tenacious defense that didn’t allow the Horsemen an easy bucket after the first four minutes combined for a 59-45 win in Michael Marr Gymnasium. The win moves Robertson (19-5 overall, 6-2 in 2-3A) within a game of the Horsemen (16-8, 7-1) and a half-game of West Las Vegas (14-6, 6-1) in the 2-3A standings.

There is a lot of work to be done if the Cardinals (19-5 overall, 6-2 in 2-3A) are to win the district title and earn a top-two seed, but they cleared the first hurdle — staying alive.

“My message to them was, ‘Go out and have some fun,’ ” Robertson head coach Manuel Romero said. “There’s no pressure. I mean, there is some pressure, but you just execute and do what you got to do.”

What the Cardinals did was force the Horsemen into becoming jump shooters. Even though St. Michael’s has a large stable of big men, Robertson’s interior defense from seniors Julius Vaughn and Santiago Gonzales, plus junior Derek Montaño made it hard for the St. Michael’s guards to get the ball inside, which stagnated the offense.

“It was horrible execution,” St. Michael’s head coach Davis Rodriguez said. “You have some early success and you forget you have an offense. And [the Cardinals are] hungry. They were hungrier than we were. They were getting to loose balls and rebounds. They wanted it more than we did.”

The early success Rodriguez alluded to came in the opening minutes. St. Michael’s was smoking hot, knocking down its first five shots to take a 12-7 lead on Devin Flores’ layup with 4:06 left in the opening quarter. The Cardinals did not panic, though, and stayed committed to their defensive-game plan.

Slowly, but surely, the misses and the mistakes began to pile up for the Horsemen. They missed 18 of their next 20 shots and were just 10 for 31 from the field through three quarters. After committing just seven turnovers in the first half, St. Michael’s matched that total in the third quarter, as Robertson pushed its lead to 44-22 on a pair of free throws from Lubby Marrujo with 49.5 seconds left in the quarter.

Perhaps the most troubling sequence came in the final moments of the first half. After Lucas Coriz scored on a layup with 2:42 to go to cut the Robertson lead to 26-18, he came up with a steal and had an open court for a transition bucket — except he short-armed the layup. Then Flores had his putback lip out. Then Ruben Salazar missed a third attempt before Gonzales cleared the glass.

After another Cardinals turnover, St. Michael’s had three more chances to score in the paint but missed each one. Robertson scored the last three points of the half for a 29-18 lead, which was part of an 18-2 run.

“Coach said before the game, ‘Make them take tough shots, and we got to execute on our chances we get,’ ” sophomore guard Mathew Gonzales said. “I think we did a pretty good job of doing that.”

This time, neither of them were in foul trouble. Their presence made the offense run much more smoothly. Gonzales had 15 point, while Robertson’s starting five combined for 48 points. Vaughn, who had just four points in the first matchup with the Horsemen, scored 11, and seven came in the first quarter.

Montaño came off the bench and had eight points in the first half, on his way to an 11-point performance.

Still, it is going to take some work from others for the Cardinals to play their way to the top of the district, and they need some help from their crosstown rivals. If West Las Vegas beats St. Michael’s on Wednesday, it sets up an East-versus-West matchup in Gillie Lopez Gym for what amounts to the district title.

Robertson will need to beat the Dons to force a three-way tie with St. Michael’s, and the margin must be by three points to have the head-to-head point-differential tiebreaker. The Cardinals have the edge on the Horsemen (plus-4 based on a 13-point margin of victory maximum for the teams involved).

“We dug ourselves into this hole,” Romero said. “We’re the only ones who can dig ourselves out of it.”

What else could you expect from a team that is technically the best in class, but only third in the district?