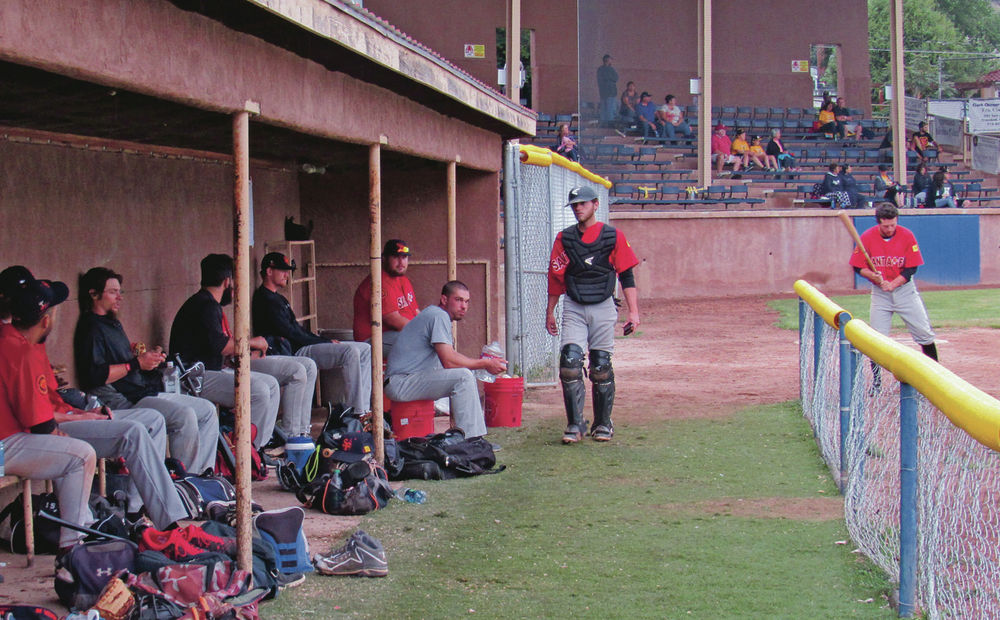 Fuego players hang out Saturday in the dugout during a 2 hour and 25 minute rain delay in Trinidad. They were waiting to play Game 2 of their Pecos League playoff against the Trigger at Central Park in Trinidad, Colo. Will Webber/The New Mexican 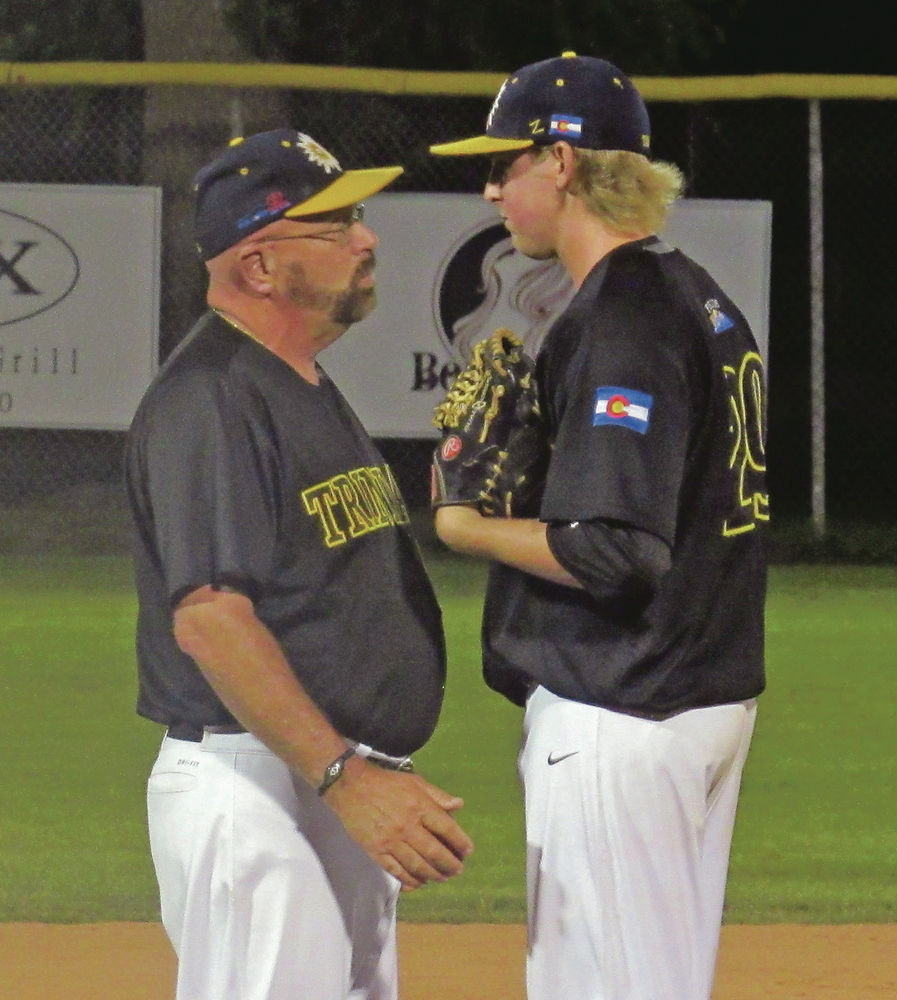 Trinidad starting pitcher Christian Schneider, right getting a visit from Triggers manager Royce Holder during the first inning Saturday night against the Santa Fe Fuego in Game 2 of the Pecos League playoffs in Trinidad, Colo. Will Webber/The New Mexican

Fuego players hang out Saturday in the dugout during a 2 hour and 25 minute rain delay in Trinidad. They were waiting to play Game 2 of their Pecos League playoff against the Trigger at Central Park in Trinidad, Colo. Will Webber/The New Mexican

Trinidad starting pitcher Christian Schneider, right getting a visit from Triggers manager Royce Holder during the first inning Saturday night against the Santa Fe Fuego in Game 2 of the Pecos League playoffs in Trinidad, Colo. Will Webber/The New Mexican

TRINIDAD, Colo. — They waited for more than two hours to get started, sitting out a light drizzle that the long-range weather forecasts promised would turn into a steady downpour.

The deluge never came, but by time they pulled the tarp off Central Park’s infield and started Saturday night’s Game 2 of the Pecos League Northern Division playoff series, most of the fans sitting under the rickety wood roof of the concrete grandstand had gone home.

Scheduled for a 6 p.m. start, Game 2 was delayed 2 hours, 25 minutes and dragged deep into the night. Players from both teams waited out the weather in their respective dugouts, finally getting a reprieve when the decision was made to get the field ready and throw out the first pitch.

Trinidad manager Royce Holder said he didn’t want to start the game until radar images showed a storm system just outside this Southern Colorado town had dissipated. The players had rolled out the giant white tarp to cover the infield at about 5 p.m. while both teams spent their time mingling with the handful of fans from both teams.

The option, Holder said, would have been playing a day-night doubleheader on Sunday in an attempt to finish what has already been an abbreviated series. The series started in Santa Fe, but was delayed by weather and poor field conditions. He said neither team wanted to play two games to decide their postseason fate, so they were determined to get Saturday’s game in the books.

It finally did at 8:25 p.m. and the Fuego, just as they had in Game 1, jumped to an early lead by scoring twice — once on a Eddie Newton RBI single and again on an RBI double to center by Chevas Numata.

The game’s progress was slowed even further as Fuego starting pitcher Francisco Rodriguez walked 10 batters in the first three innings.

Originally scheduled to be a best-of-5 with the first two games in Santa Fe, the series was shortened to a best-of-3 when Wednesday’s opener was halted because of rain and Thursday’s Game 2 was cancelled due to unplayable field conditions at Fort Marcy Ballpark.

The decision was made to move the series to Trinidad and shorten it to a best-of-3. The Fuego took the opener on Friday night, using a five-run first inning to claim an 8-5 upset win and take a 1-0 lead in the series.

They entered Saturday’s second game with a chance to sweep.

Alpine stayed alive in its series with Roswell, taking Saturday night’s Game 4 with an 8-4 victory at Joe Bauman Park in Roswell. The Cowboys never trailed in the game, building a 7-0 lead in the third inning.

The series is tied 2-2 heading into Sunday’s finale. Alpine dropped the first two games at home, then rallied to win Game 3 on Friday night.

Francisco Rodriguez struck out 15 batters and closer Tyler Herr got the final out in dramatic fashion as the Santa Fe Fuego completed a stunning two-game sweep of Trinidad with a 4-2 victory Saturday night.