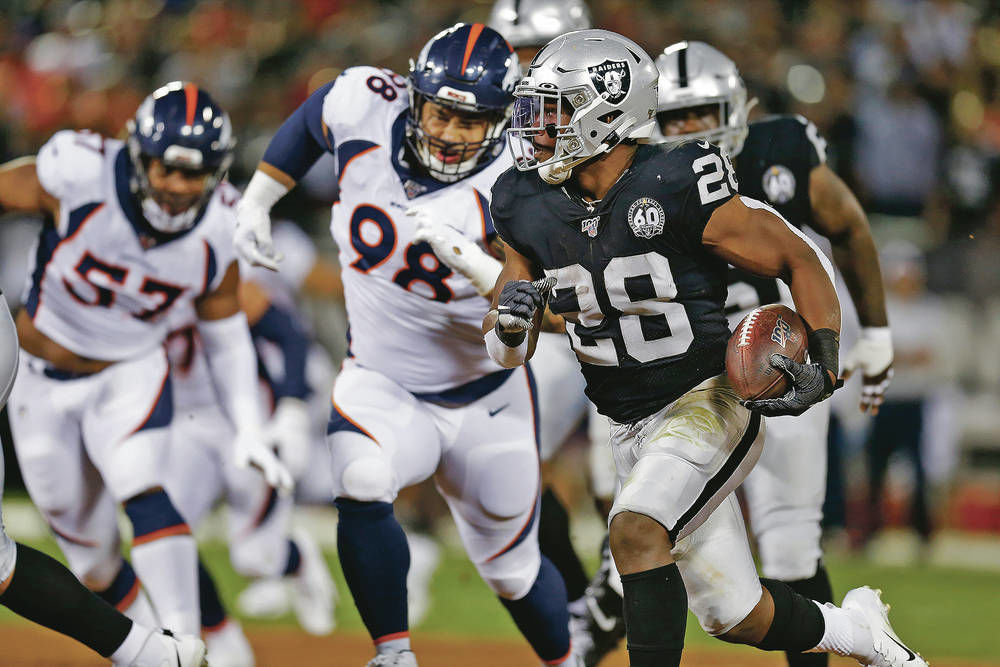 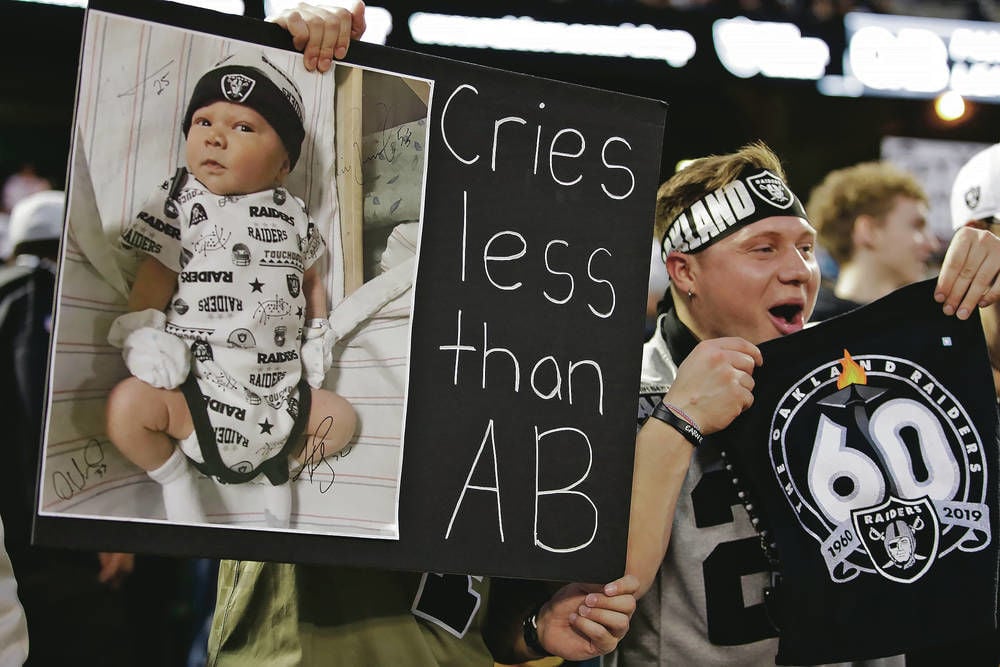 An Oakland Raiders cheers during the first half of an NFL football game against the Denver Broncos Monday, Sept. 9, 2019, in Oakland, Calif. (AP Photo/Ben Margot)

An Oakland Raiders cheers during the first half of an NFL football game against the Denver Broncos Monday, Sept. 9, 2019, in Oakland, Calif. (AP Photo/Ben Margot)

The Raiders (1-0) took out all the frustration over the drama surrounding Brown with a convincing win over the AFC West rival Broncos (0-1). The offensive line cleared holes for Jacobs and protected Carr, and the defense harassed Joe Flacco into three sacks and kept Denver out of the end zone until 2:15 remained in the game.

The final scheduled home opener at the Coliseum before the Raiders planned move to Las Vegas next season began with derisive chants from the boisterous fans toward Brown. Those only grew louder after each successful pass play as both the fans and Raiders players seemed relieved to have the monthlong saga over Brown in the past.

He arrived with optimism following a trade from Pittsburgh in March. But a bizarre foot injury, fight with the NFL over his helmet, skipped practices, multiple fines, a run-in with general manager Mike Mayock and odd social media posts ultimately led to the decision to release the game’s most prolific receiver two days before the opener.

Brown agreed to a deal with New England just hours after being granted his wish to be released by Oakland on Saturday and the Raiders wasted little time proving they had moved on.

They took the opening kickoff and marched 75 yards in 10 plays. Carr completed all five passes to four receivers, capped by an 8-yard TD to Tyrell Williams.

Oakland added another score in the second quarter when Jacobs capped a 95-yard drive with a 2-yard run to make it 14-0. Jacobs scored again in the fourth quarter, becoming the first Raider to run for two TDs in his debut.

Carr completed 22 of 26 passes for 259 yards and wasn’t sacked once after going down 51 times last year. … Jacobs had 23 carries for 85 yards and a 28-yard reception. … Wiliams had six catches for 105 yards, including a game-sealing 10-yard catch on third down after the two-minute warning. … Flacco was 21 for 31 for 268 yards with a 1-yard TD pass to Emmanuel Sanders in Sanders’ first game back from a ruptured Achilles’ tendon.

After recording an NFL-low 13 sacks last year following the trade of Khalil Mack, the Raiders got off to a much better start this year with the pass rush, sacking Flacco three times. Benson Mayowa had two sacks, becoming the first Oakland player to record more than one in a game since Mack had two against Denver on Dec. 17, 2017. Rookie Clelin Ferrell also had one.

Denver’s comeback attempt fell short in part because the Broncos had to settle for field goals on three red zone trips in the second half. A pair of third-down sacks by Mayowa and Ferrell stalled two drives and DaeSean Hamilton dropped a potential TD in the end zone.

Broncos: RT Ja’Wuan James left the game in the first half with a knee injury. … WR Tim Patrick left in the second half with a hand injury.

Raiders: CB Gareon Conley was taken off the field strapped to a stretcher with a neck injury after being hit in the head by teammate Johnathan Abram.

Conley was down on the ground for several minutes with players on both teams kneeling on the ground out of concern. Conley was taken off the field on a stretcher but was able to give a thumbs up to the crowd.

Broncos: Host Chicago on Sunday. Fangio spent the past four seasons as defensive coordinator for the Bears.

Raiders: Host Kansas City on Sunday in a second straight division matchup. The Chiefs have won eight of the past nine games in the series.