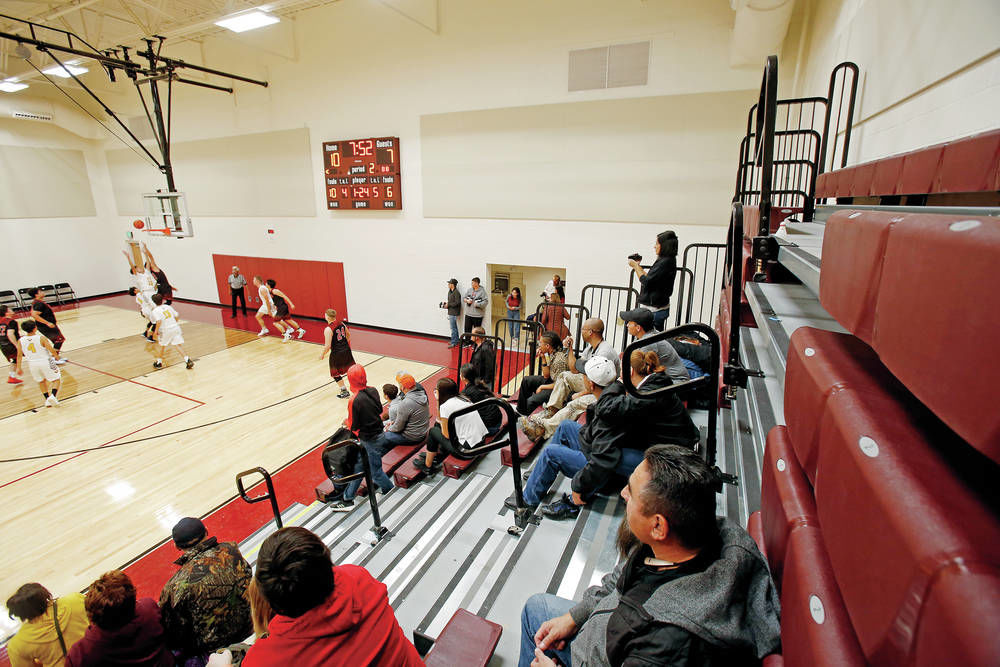 People watch Academy for the Technology and the Classics play Springer on Tuesday during the first home game in the new gymnasium at ATC, which opened in October. The top seven rows of bleachers cannot be extended during games or the stands will take up one side of the court, which cuts capacity in half. Photos by Luis Sánchez Saturno/The New Mexican 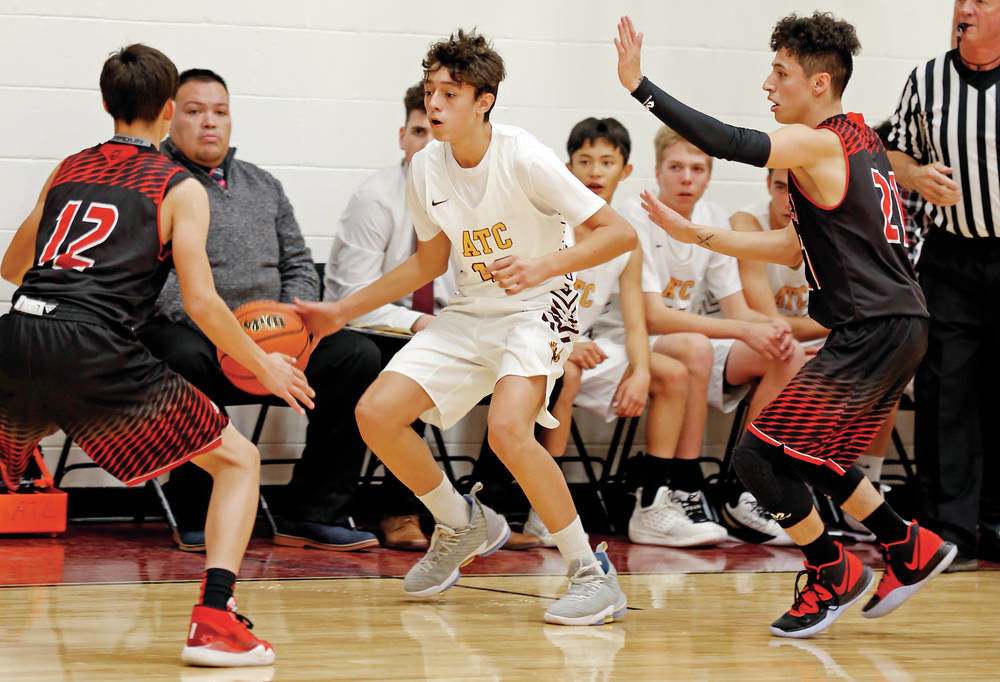 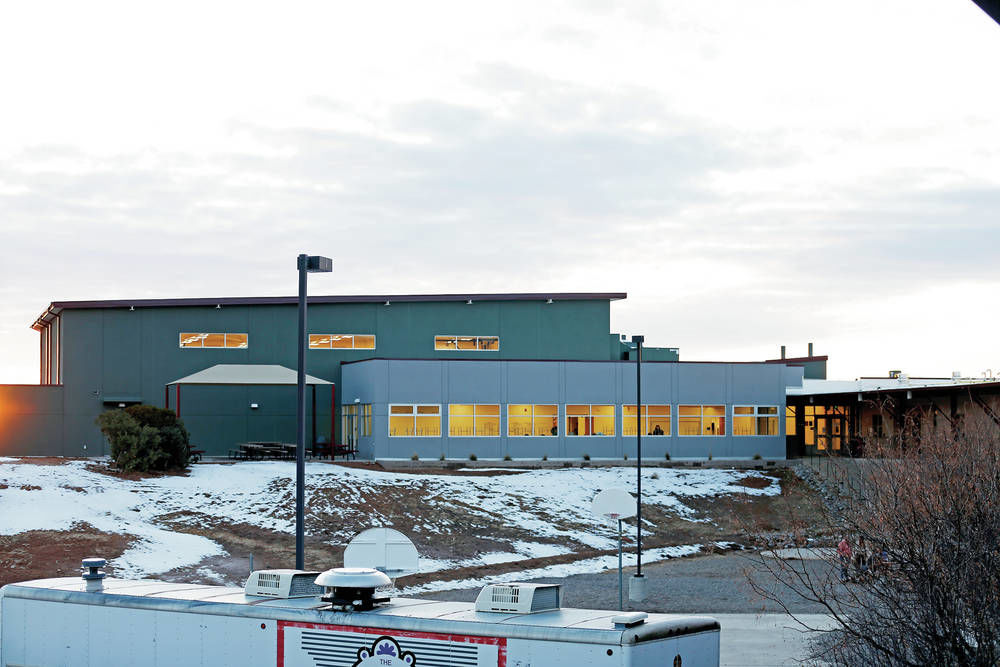 The new gym at the Academy for the Technology and the Classics on Tuesday, December 3, 2019. Luis Sánchez Saturno/The New Mexican 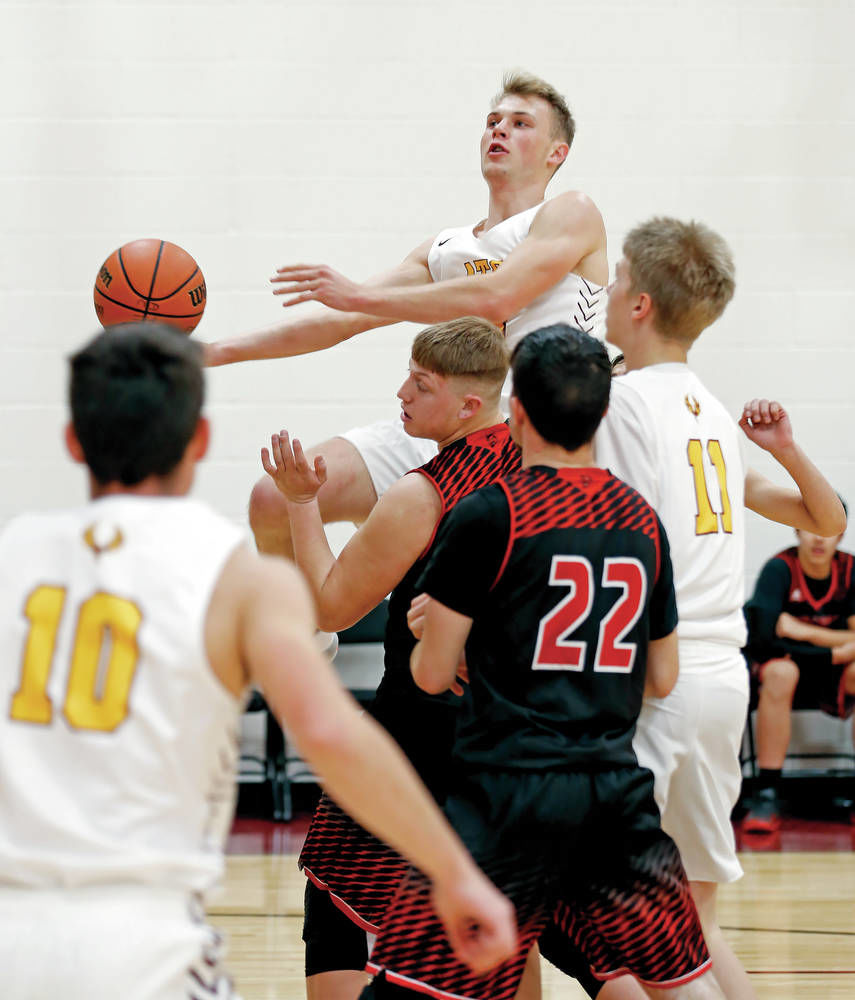 ATC’s Milan Lombardo, number 23, goes up for a layup during the first quarter of the ATC vs Springer basketball game at the new gym at the Academy for the Technology and the Classics on Tuesday, December 3, 2019. Luis Sánchez Saturno/The New Mexican

People watch Academy for the Technology and the Classics play Springer on Tuesday during the first home game in the new gymnasium at ATC, which opened in October. The top seven rows of bleachers cannot be extended during games or the stands will take up one side of the court, which cuts capacity in half. Photos by Luis Sánchez Saturno/The New Mexican

The new gym at the Academy for the Technology and the Classics on Tuesday, December 3, 2019. Luis Sánchez Saturno/The New Mexican

ATC’s Milan Lombardo, number 23, goes up for a layup during the first quarter of the ATC vs Springer basketball game at the new gym at the Academy for the Technology and the Classics on Tuesday, December 3, 2019. Luis Sánchez Saturno/The New Mexican

Ron Drake used to tease his coaching friends about carrying bags of basketballs and other equipment in their car as they went to practice — until he was the one doing the same thing.

Drake was accustomed to having just about everything a high school coach could want — especially an on-campus gymnasium that was his second home. When the state’s winningest head girls basketball coach, who coached at big schools Santa Fe High, St. Michael’s, Española Valley and Pojoaque Valley, accepted the opening at Academy for Technology and the Classics in April, Drake got a taste of what life is like for a nomadic program that has no home gym.

Now, he understands what his cohorts at Monte del Sol, Tierra Encantada and Desert Academy/Santa Fe Waldorf, schools that do not have gyms, went through.

“I used to laugh at Jimmy Sosoya when he was at Monte del Sol,” Drake said, “and Ray [Roybal, the current head coach at Monte del Sol], and Mike [Velarde, the Wild Wolves head coach] and those guys. I got a taste of that this summer.”

It wasn’t until ATC opened its $6 million gym in October that the need to rent a gym for Drake’s team or the boys program led by Anthony Moya was not necessary. Both programs finally had their home, and it truly became official Tuesday when the school had its first home game for its high school programs.

ATC’s boys and girls junior varsity teams played Walatowa’s varsity — the Cougars won both games convincingly — while the varsity boys lost to Springer 64-39 to christen the unnamed gym on the school campus. The varsity girls get their home opener Saturday against Albuquerque Cottonwood Classical Prep.

For the previous seven seasons, ATC rented gyms at IAIA, the Genoveva Chavez Community Center, Fort Marcy Recreation Complex, Christian Life Academy and Nina Otero Community School for practice and games. The new building includes classrooms, a cafeteria, locker rooms and offices along with a gym that can hold between 450 and 500 spectators.

Despite the outcomes of Tuesday’s games, both coaches expressed excitement about what a gym could mean for their respective programs. Moya said he has his varsity, junior varsity and middle school teams practicing together at certain times in the morning. That helps him evaluate players at one setting while also ensuring that the instruction is consistent with how he wants it taught.

“Being in one place, we have all the coaches together,” Moya said. “We can help each other out, and it’s just good to build the whole team up. Before, the varsity would be at [the Institute of American Indian Arts wellness center] and I would say, ‘Don’t bring me the JV. I only want the varsity.’ Now I don’t have the do that. It’s a home.”

Milan Lombardo, the Phoenix’s 6-foot-2 senior forward, said the first thing he did when the gym opened was try to dunk. He added that the gym is also a breeding ground for the type of culture the players want for the program.

“That’s the biggest thing, Lombardo said. “We can see in two years, three years, that this team is going to be [good]. These players coming up are going to have a culture because they’ll be growing up together.”

Eighth grader Julian Bernardino admitted that, prior to this season, there was a disconnect within the program. He said he didn’t know Lombardo when the school announced how the teams did over the intercom and who their standout performers were during last season

That question doesn’t need to be asked any more.

While the players got to know each other, the gym also allowed both coaches a chance to work on skills during the offseason. Drake said he used about five hours out of the 7 1/2 the New Mexico Activities Association allows programs when they are not in season during the school year. The boys often get a chance before practice begins to get in some stretching and shooting.

“[ATC athletic director] Tim Host has a class in sixth period, and he gave me two days to come in and shoot with them,” Drake said. “There were eight of them in the class, so that helped. And we had open gym for the ones who weren’t in [the class]. So, we get five hours in, and it gave me the opportunity to do some shooting drills.”

However, it’s not quite a perfect fit.

The top seven rows cannot be extended or the stands will take up one side of the court, which cuts capacity in half for games. The locker rooms are small and do not have a whiteboard for coaches to use. Drake, Moya and Host share the athletic department office.

For the past nine days, the girls team had just one practice in the gym because of the holidays, court maintenance and events in the gym. It did not practice Tuesday, since the gyms at ATC and IAIA were in use for games. Drake said the team has to practice at IAIA on Wednesday and Friday because of school events.

Despite that, the facility is miles ahead of where both programs were for their first seven years of existence.

It's great that ATC got their own, actual, home. Sad to see that it is a small court and that the bleachers were not designed to be fully utilized for a basketball game.