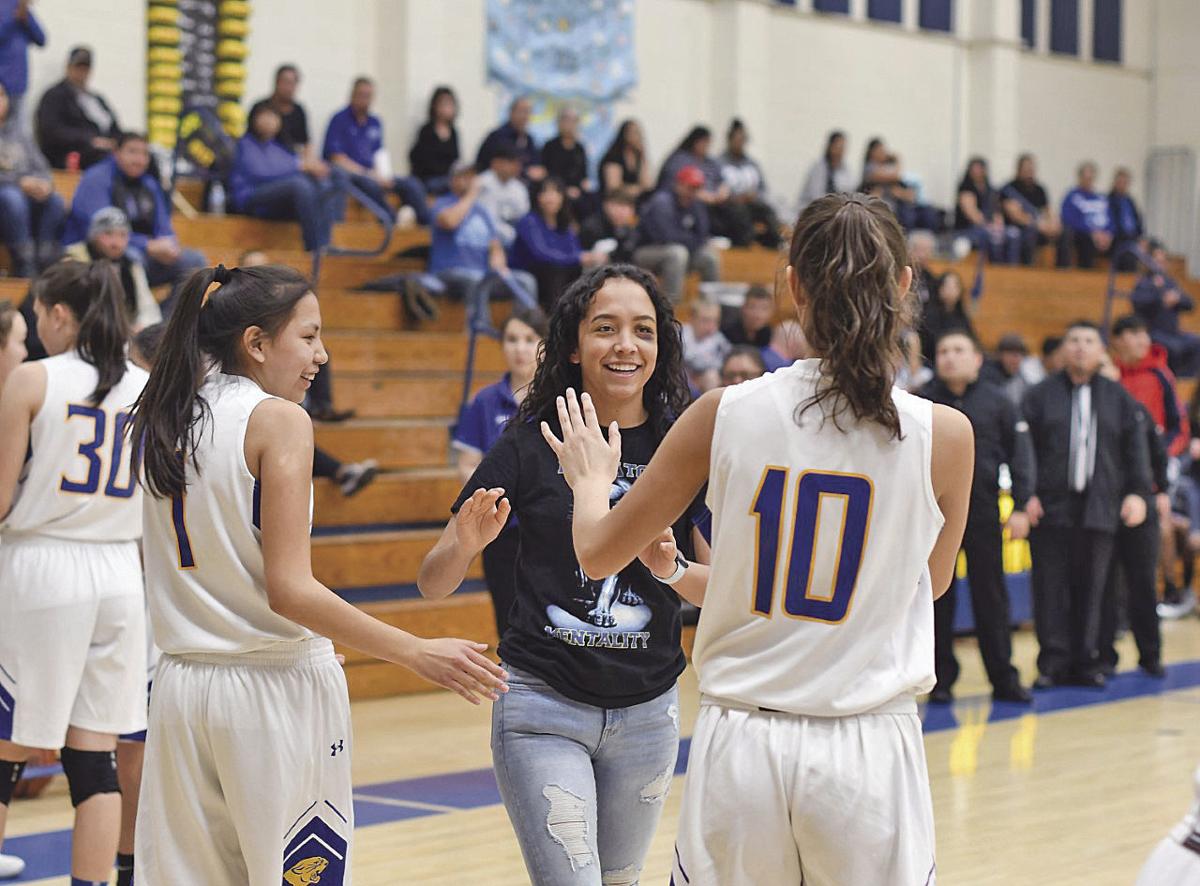 Peñasco player Jennifer Aguilar, with a bruise under her left eye, is introduced with her teammates Thursday against Questa. The senior suffered a fractured orbital bone and a ‘traumatic brain injury’ after she collided with the knee of an Escalante player in a Jan. 30 game. She was knocked out and spent a few nights in a hospital. 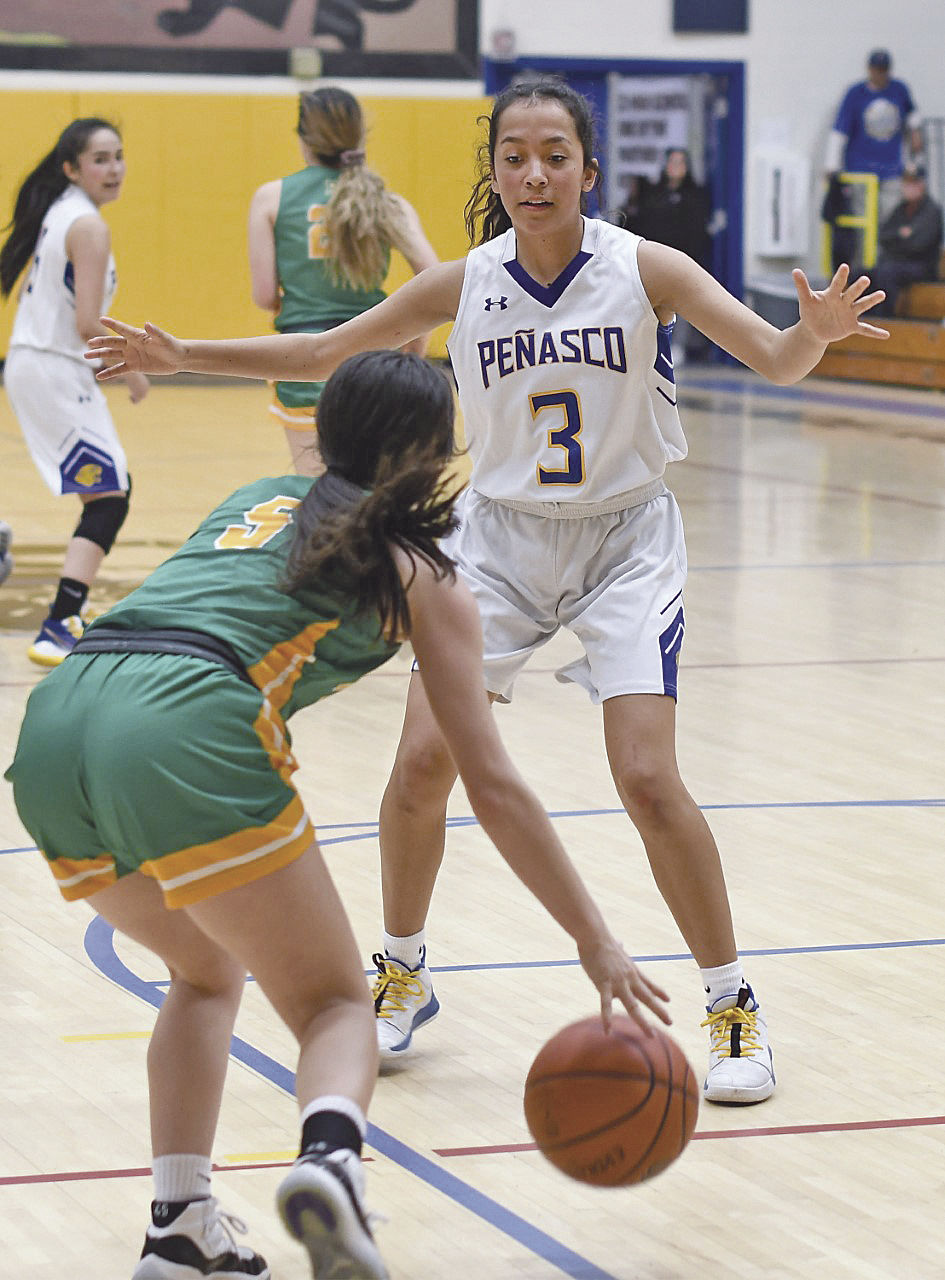 Peñasco player Jennifer Aguilar plays against Pecos on Jan. 27 in Pecos. She suffered a serious head injury Jan. 30 in a game against Escalante and was hospitalized for a few days.

Peñasco player Jennifer Aguilar, with a bruise under her left eye, is introduced with her teammates Thursday against Questa. The senior suffered a fractured orbital bone and a ‘traumatic brain injury’ after she collided with the knee of an Escalante player in a Jan. 30 game. She was knocked out and spent a few nights in a hospital.

Peñasco player Jennifer Aguilar plays against Pecos on Jan. 27 in Pecos. She suffered a serious head injury Jan. 30 in a game against Escalante and was hospitalized for a few days.

PEÑASCO — The last thing Jennifer Aguilar remembers about the evening of Jan. 30 was that coach Mandy Montoya picked up a technical foul.

Aguilar, a senior wing for the Peñasco girls basketball team, remembered the moment not just because it was the first time Montoya, the Lady Panthers’ first-year head coach, was “T’d up,” but the reaction from the Escalante Lady Lobos at midcourt of a District 5-2A game in Tierra Amarilla.

“They were clapping kinda obnoxiously,” Aguilar said. “I guess that’s why I remembered it.”

That also was the first thing she told Montoya when she asked Aguilar what she recalled at Presbyterian Española Hospital later that night. What Aguilar doesn’t remember — but Montoya and her Lady Panthers teammates recall so vividly — is how she ended up there.

Montoya said Aguilar suffered a fractured orbital bone, two fractures to her sinus area and a “traumatic brain injury” after her head collided with the knee of an Escalante player in the fourth quarter. Aguilar spent two days in the hospital, and she has been a valued spectator on the bench over the past three games as the Lady Panthers, who are 20-2 and the top-ranked team in Class 2A according to MaxPreps.com’s Freeman rankings, march toward the postseason.

Aguilar does not remember anything about the collision or much of the game, which she counts as a blessing.

“I think that I do remember, but my body doesn’t want me to remember,” Aguilar said. “When I was in the hospital and I remember waking up, it wasn’t like, ‘Oh my gosh, why am I here?’ It was like I already knew.”

Her teammates, though, still carry the image of her injury with them.

It was late in a hotly contested, physical game and the host Lady Lobos held a 43-35 lead when Aguilar grabbed an errant pass and started a fast break in a video viewed by The New Mexican. As she approached the paint, Aguilar bounced off an Escalante defender, which sent her sprawling.

That’s when another Lady Lobo sprinting into the play and banged her knee into Aguilar’s forehead, rendering her unconscious as her head tilted back from her chest and her legs splayed behind her torso on her side. Montoya said about 30 seconds later, Aguilar began convulsing as Escalante trainer Tara Terrazas-Martinez and Jodi Casados, an area doctor, rushed to her aid.

While that was happening, the Lady Panthers were dealing with their own trauma as they watched events unfold.

“I thought she lost her life,” Montoya said. “To see her head snap back in that position. ... I mean, not even a gymnast bends that way.”

“My first reaction was to scream,” senior post Carly Gonzales said. “I see one of my closest friends on the ground and … I didn’t know what to do, so I just ran to the bench. I felt like I scared the team, too, but because they had never seen me in that way. I cried and freaked out.”

Senior guard Alexandria Sandoval remembers racing to Aguilar’s side to comfort her, even as she watched her teammate’s eyes roll into the back of her head.

“I was like, ‘OK, you can’t panic, you can’t freeze, you got to help Jen,’ ” Sandoval said. “She is the one who needs help. I said, ‘Jen, Jen, are you OK?’ That was when I knew she was unconscious. Next thing I knew, my coach was there and her parents were there. So, I went to the bench, and I saw Carly was having a panic attack. I went to help her and tell her it was going to be OK.”

Montoya, meanwhile, bounced back and forth from checking on Aguilar and her teammates, as well as trying to calm an angry Peñasco crowd as tensions rose. She implored fans and parents not to escalate an already delicate situation.

“I thought she did an excellent job,” Escalante athletic coordinator Dusty Giles said. “It was hard to go from one end of the spectrum to the other. I could tell both coaches were very intense in trying to pull out the victory, and it’s hard to switch on a dime to a whole different situation.”

An ambulance arrived about 45 minutes later to take Aguilar to the hospital. Montoya told her athletic director, Brandon Gurule, she was forfeiting the rest of the game, giving Escalante the win.

Montoya said she and most of the player left Tierra Amarilla with their parents, and some of them went to the hospital to check on Aguilar. However, the next couple of days were trying for the Lady Panthers because most of them didn’t know how their teammate was doing. For many of them, a FaceTime phone call with Aguilar before the Mesa Vista game Feb. 1 was the first time communicating with her, and it made for an emotional locker room.

That was just a precursor to Monday.

El Centro Family Health offered counseling for players, students and coaches coping with what they saw. Some of the players did use the service, as did Montoya, but the coach said the team has refrained from talking about what they saw except on an individual basis.

The incident opened Montoya’s eyes about the importance of mental health regarding traumatic events.

“I think it is important for me, as the leader, that I’m OK in order for them to be OK,” Montoya said. “It’s so much bigger than the X’s and O’s side of it. They needed to be OK with what they saw that night.”

Yet, no one was prepared for the sight later that day of Aguilar walking into the gym before the Lady Panthers took on McCurdy in a nondistrict game. She received a standing ovation, which moved her to tears. Aguilar also received flowers as a gesture of good will from the Lady Bobcats, which has been a common theme in the three games since her injuries.

“It was harder than I thought it was going to be,” Aguilar said. “The crowd, they cheered for me. Everyone was watching me right then and there, so it was kinda weird.”

She wasn’t alone, as her teammates cried as they hugged her and welcomed her back. Then they had to get ready to play moments later.

“Jennifer has been the person that I talked to during warmups,” Gonzales said. “We joke around and she’s helped me relax during games when I was nervous. At the end of warmups, we would tie each other’s shirts and talk to each other. It was hard on me not having her there for the warmups.”

With Aguilar on the bench, the players feel they have a renewed sense of purpose to win for her as well as each other. While no one knows how long she will be off the court — or even if she will return in time for the Class 2A State Tournament in March — Sandoval said Aguilar is still a presence on the court, even if it’s just in spirit.

“She gives us more motivation to play because we can’t take anything for granted,” Sandoval said. “It could be here today, but then the next, it’s gone.”

While the Lady Panthers are recovering from the incident, they haven’t quite let go of the game against the Lady Lobos. Gonzales said it felt more like a football game, because the Lady Lobos were very physical and the officials let the game play out that way. Aguilar remembered being shoved from behind by an Escalante player on a drive to the basket in the first half. Montoya’s technical foul was a result of her arguing about the way the game was being called.

Sandoval said Escalante’s court is smaller, so the action feels more compact compared to her home gym, which might have played a contributing factor to the style of play. However, she does not hesitate in her description of the game.

“It was [dirty],” Sandoval said. “Our coaches even said [after the game], ‘We are not like them and we need to be different since we are the No. 1 team. We need to show the difference between class and disrespect.’ ”

Giles, though, disputes that notion. He watched much of the game in between his administrative duties, and saw it as an intense, high-level game between two very good teams. Escalante is ranked sixth in the Freeman rankings and leads the district at 7-0 after Saturday’s win over Questa.

“What I saw were two teams really going at it at the highest level they could,” Giles said. “It’s what you look for in athletics. Those are games to watch when you see two teams giving it their all, and that is what I saw. One of their players got hurt and we are sensitive to that, but I don’t think there was anything malicious that went into that.”

Montoya sent a video of Aguilar’s injury to the New Mexico Activities Association for it to review but has not heard anything from the organization. Giles said he was aware the NMAA looking into the matter, but Chama Valley Independent Schools Superintendent Anthony Casados has discussed it with NMAA Executive Director Sally Marquez.

Regardless of the emotions tied into that contest, Montoya said it is important for her team to get past what happened when the two teams play again Feb. 15. There will be plenty at stake, as the two teams are battling for the district title and a high seed that will likely come from it.

“We have to show that we’re still not on the floor [at Escalante],” Montoya said. “We didn’t stay on that gym floor. We got to come ready and be ready to defend our home court. Ultimately, the girls just want to play basketball. It doesn’t matter who the opponent is.”