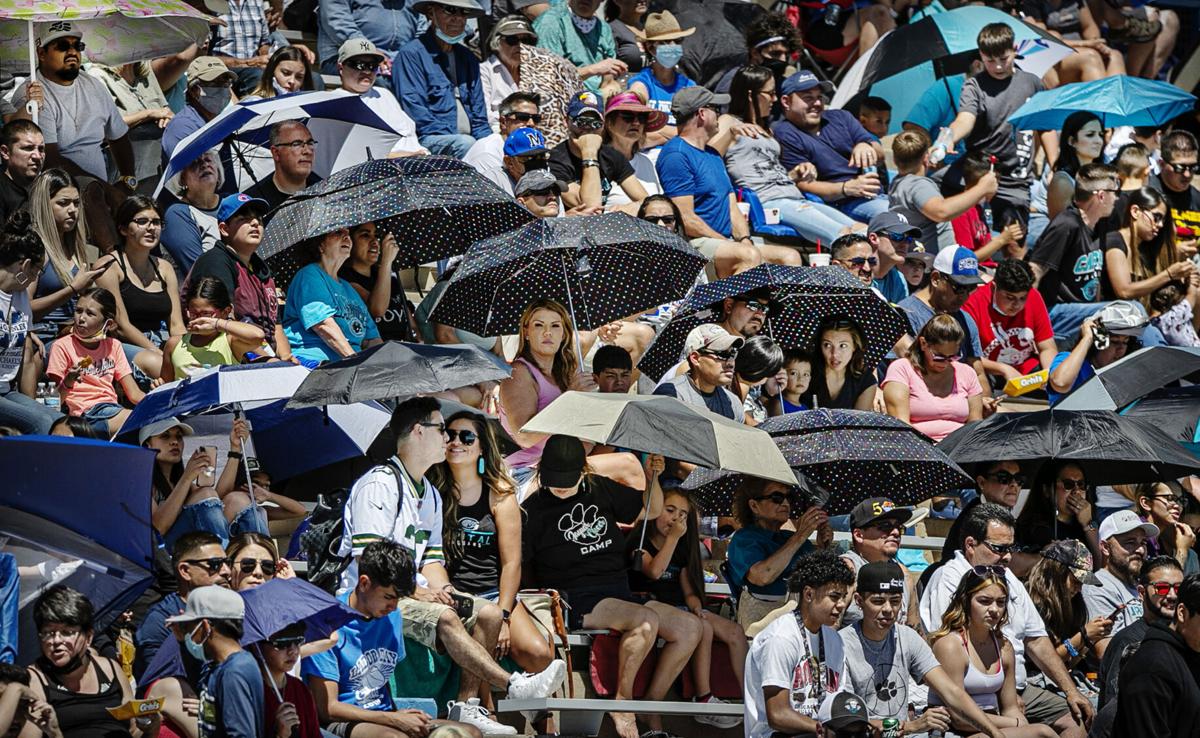 Football fans crowd the stands at St. Michael’s High School during the Horsemen’s game against Capital on Saturday. Tailgating is prohibited at Friday’s game between Santa Fe High and St. Michael’s, but neither mask-wearing nor social distancing will be enforced for spectators. 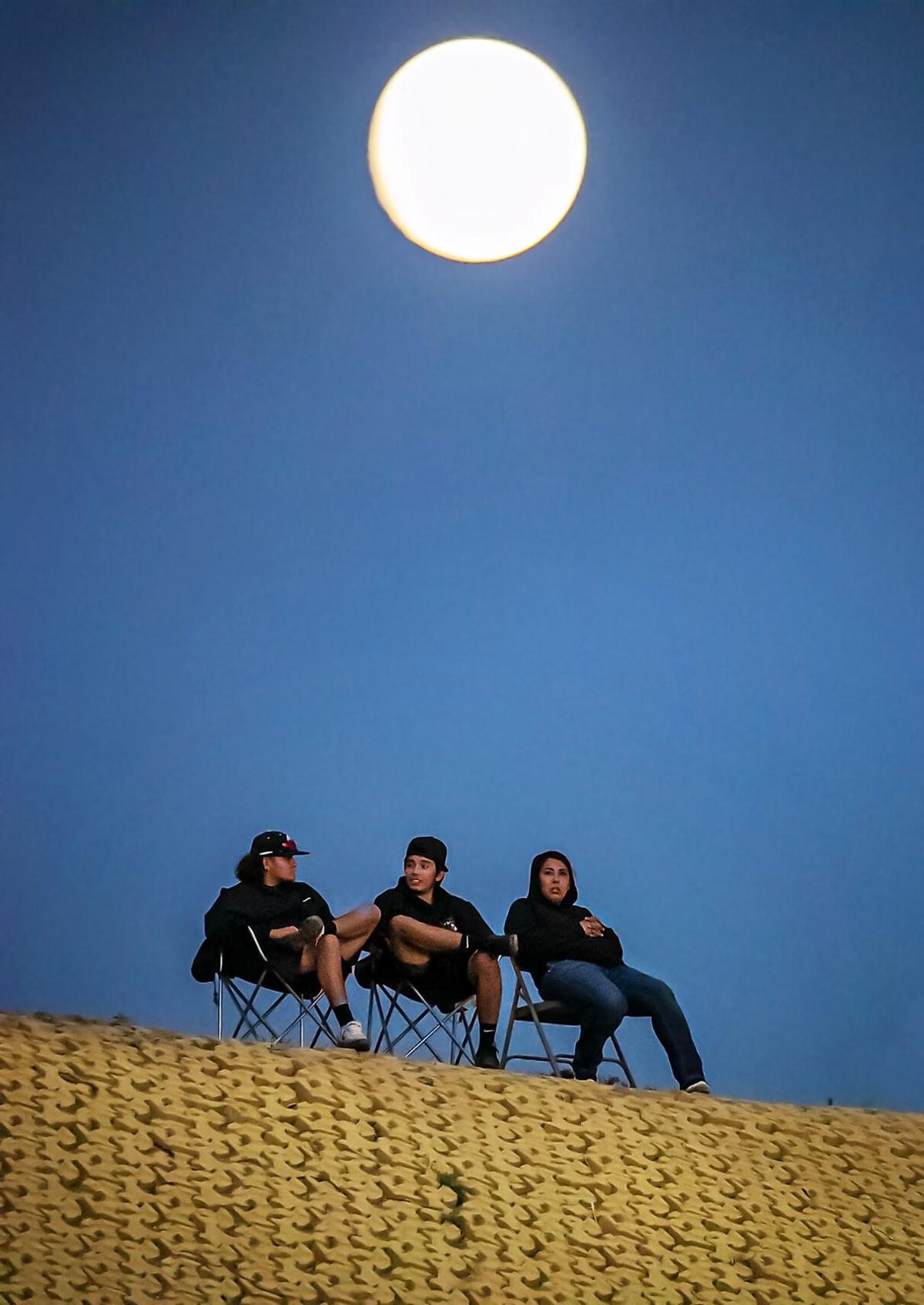 Demons fans find a spot away from the crowd to watch Santa Fe High’s season opener against Las Vegas Robertson on Aug. 20 at Ivan Head Stadium in Santa Fe.

Football fans crowd the stands at St. Michael’s High School during the Horsemen’s game against Capital on Saturday. Tailgating is prohibited at Friday’s game between Santa Fe High and St. Michael’s, but neither mask-wearing nor social distancing will be enforced for spectators.

Demons fans find a spot away from the crowd to watch Santa Fe High’s season opener against Las Vegas Robertson on Aug. 20 at Ivan Head Stadium in Santa Fe.

Friday night will look almost like a normal Horsemen-Demons contest, even amid a rise in coronavirus cases.

The one difference will be the tailgating, as Santa Fe Public Schools athletic director Marc Ducharme said Santa Fe High will not allow fans to do that for the game. However, Ducharme said spectators will not have to wear masks for the game, which should attract between 2,500-4,000 fans to Ivan Head Stadium, and he does not envision spacing out the crowd to encourage social distancing.

He said the district is abiding by the most recent update to the guidance provided to schools by the state Public Education Department. Last week, the department issued a recommendation for athletes, coaches and spectators to wear masks, but did not require them.

Ducharme said part of the reasoning is that he has seen fans at sporting events doing a good job of adhering to social-distancing measures so far this year.

“We will be at the ready if there are restrictions or attendance limits,” Ducharme said. “When I’ve looked out in the stands, I think it’s just how it is in Santa Fe. People are conscious about [social distancing] here and it’s something that just seems to happen naturally.”

Santa Fe High’s season opener saw about 2,000 fans attend the Demons’ 34-6 win over Las Vegas Robertson, but the majority of home-side fans congregated in the middle of the stands.

Normally, the St. Michael’s-Santa Fe High game draws the largest crowd of the season for both schools, which is why it is played at Ivan Head Stadium. The two schools alternate hosting the game, and this year was Santa Fe High’s turn.

St. Michael’s athletic director Kevin Garcia said he had no issues with the decision by the school district, adding it was Santa Fe High’s home game. He also said the district has been very accommodating to St. Michael’s over the years, as it has used the stadium for state playoff games and all three Class 3A championship game appearances hosted by the school since 2003.

“We appreciate what they do for us,” Garcia said. “It is their home game, and we are going to honor that.”

In previous years, fans have staged tailgate parties prior to the game, especially on the visitor’s side where St. Michael’s fans generally sit. Garcia added the school has its own tailgate tradition at Christian Brothers Athletic Complex that goes back about 15 years.

During Saturday’s 60-8 win over Capital, the east-side parking lot housed several Capital and St. Michael’s families watching the game while eating homemade food and drinking water and other beverages.

Ducharme said observing the tailgate section while he was at the Jaguars-Horsemen game prompted him to make the decision to ban tailgating.

Some people brought it up as a concern, and I hear that and I saw it on Saturday,” Ducharme said. “It just doesn’t make sense. A tailgate doesn’t promote social distancing.”

Ducharme also said it wouldn’t be difficult for Santa Fe High to create seating sections for fans if it was required. He said adhesion marks from the caution tape used to block off sections, which the district used in the spring when more stringent requirements were set by the state for outdoor sporting events, still linger and would help staff with creating those spaces again.

“We’ll keep on adjusting if we need to,” Ducharme said. “As long as we keep the kids playing, I’m happy with that.”

😧 scary how we pick and choose when and where we want to mask up to fit our personal lives.

Scary that people mask up at all, you’re getting covid one way or another if not now in the near future, it isn’t going anywhere. Think FLU!

I’ll be sucking in huge amounts of oxygen, food scents and all kinds of germs. I hear hotdogs have an agent in them that kill covid along with green chili!!!

An entirely optional (for spectators) outdoor event? Meh. I won't object. Nor will I attend.

Seems like a fair compromise, no masks demanded in exchange for no parties.