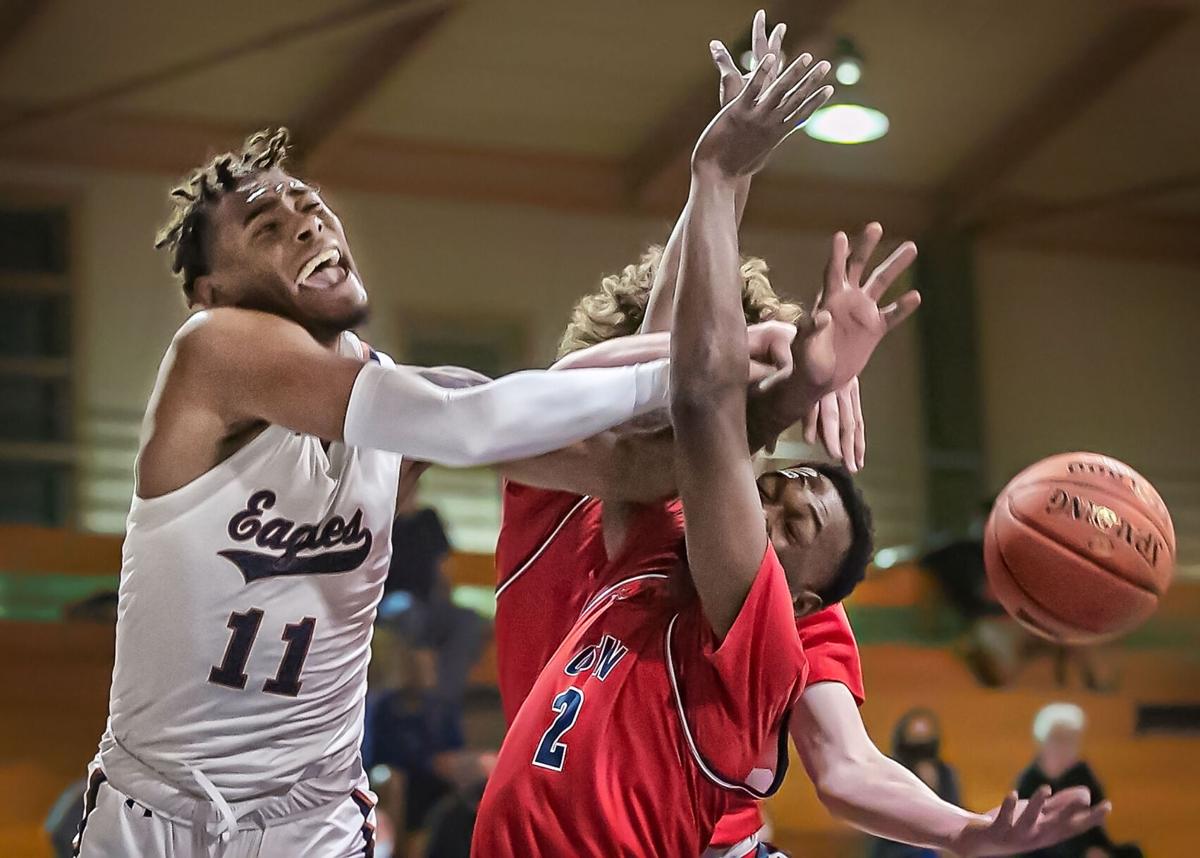 Eagles forward Tyrique Weaver, left, collides with Mustangs guard Nathaniel White while trying to control a rebound during Northern New Mexico College’s season opener against the University of the Southwest on Thursday at the Eagle Memorial Sportsplex in Española. 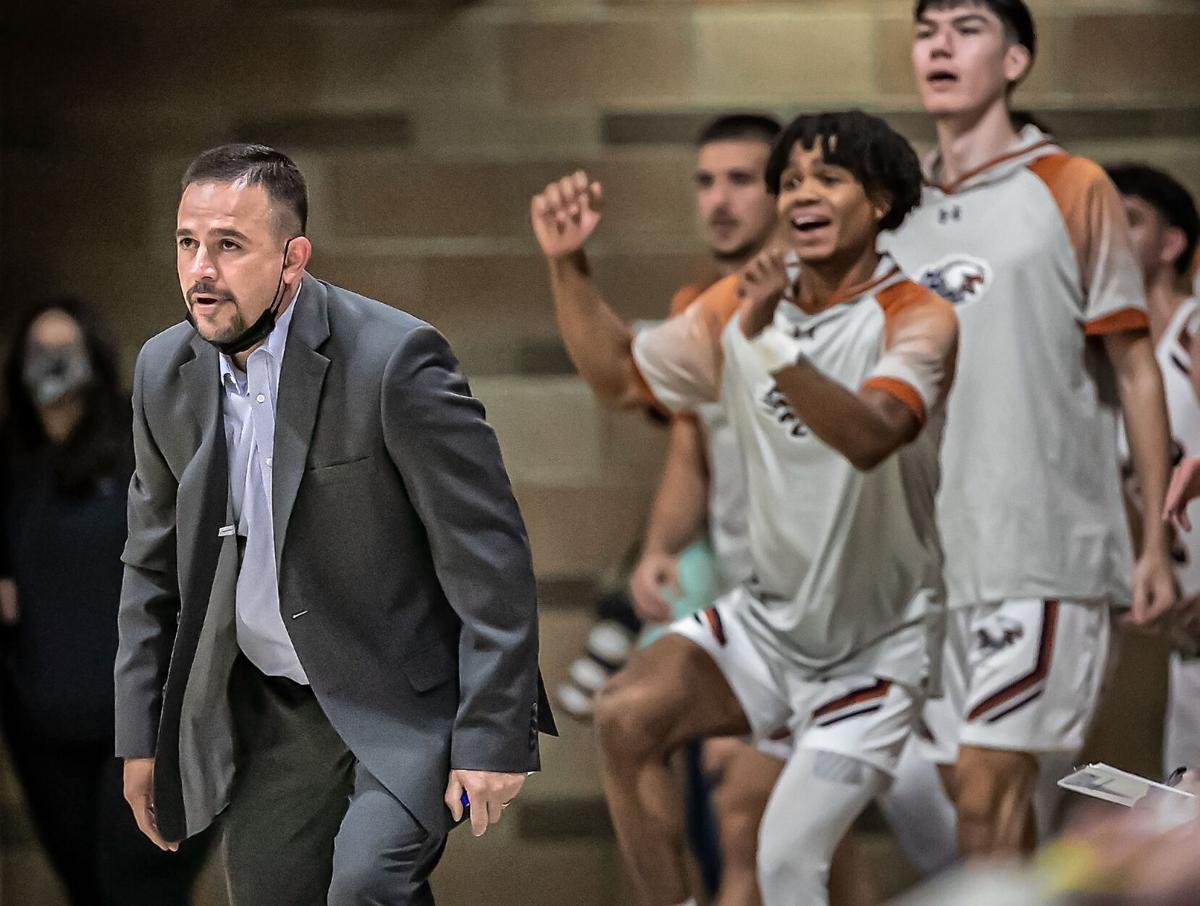 Eagles forward Tyrique Weaver, left, collides with Mustangs guard Nathaniel White while trying to control a rebound during Northern New Mexico College’s season opener against the University of the Southwest on Thursday at the Eagle Memorial Sportsplex in Española.

ESPAÑOLA — It had been 628 days since the last time Ryan Cordova had a chance to gather his players at center court to celebrate a win at the Eagle Memorial Sportsplex.

Not since Feb. 8, 2020, when Northern New Mexico College beat Park University-Gilbert had the Eagles, an NAIA program, played a game. It’s about that same time span for every other men’s college program around the state, none of which played a game within the state during the pandemic-stricken 2020-21 season.

Thursday’s game at the Sportsplex ended that drought. For Cordova, it had double meaning. It marked the return of Northern hoops on the same day the coach celebrated his 47th birthday.

The Eagles held on for an 81-76 win over visiting University of the Southwest, a game played in front of about 100 fans under strict COVID-19 protocols. All fans were required to wear masks, unvaccinated kids under 12 were not allowed and anyone in attendance had to show proof of vaccination or a negative COVID-19 test just to get in the door.

While it was less than an ideal setting for the long-overdue return of college hoops, it was more than enough to put a smile on Cordova’s face. His team held the Mustangs to a single point for the first nine-plus minutes, wasted a double-digit lead early in the second half, went back in front by as many as 16 and then withstood a furious Southwest rally to get the win.

Cordova ushered his players to the center court logo for a quick meeting but was quickly buried inside an impromptu mosh pit, players on all sides bouncing their coach around as they jumped and shouted.

“They tried to beat me up. I thought I was in the World Series, man,” Cordova said. “I thought I just hit a walk-off.”

That celebration could easily have been for the return to hoops in Española, a town that loves its high school basketball but tends to back-burner Northern except on the rarest of occasions. NNMC canceled its 2020-21 athletic season due to the pandemic, citing health concerns, the lack of fellow NAIA schools competing and the lack of financial assistance required to conduct multiple tests every week on players and staff.

Cordova said the biggest challenge through it all was getting the players to stay active and not leave the game behind.

“It was a different type of story for all of us,” said Eagles forward Estevan Martinez. “I had to get work as an electrician and kind of wait to see what would happen here. It was a downer for all of us.”

Roughly half of Cordova’s roster is made up of players from New Mexico. That includes Capital graduate Chano Herrera, a 6-foot-4 freshman who stuck around during the pandemic, working out on his own. He entered the game midway through the second half and got the loudest ovation of the game from a pack of fans sitting on the opposite side of the Eagles’ bench.

The first bucket of the night went to Atrisco Heritage product Joziah Ramos, but it was fellow Atrisco product Estevan Martinez and Cibola grad Richard Zambrano who stole the show. Martinez proved he loves to live above the rim, flying high for a slew of spectacular acrobatic moves that included a dunk or two and an ill-advised missed alley-oop jam in the final minute when Cordova wanted the Eagles to milk the clock.

“I love to jump, and I was trying to get a few for my friend Jamal sitting over there on the side,” Martinez said, a nod to teammate Jamal Harris, an electrifying 6-foot-2 guard who wasn’t cleared by the NAIA to participate in Thursday’s game.

Harris, Cordova said, has a 52-inch vertical leap that is as stunning to see as it is to read about.

What he couldn’t do, Zambrano did. He hit six 3-pointers and led Northern with 20 points. Being on the floor again, wearing a uniform and playing the game after such a long break was exactly what he needed, he said.

Zambrano moved home during the pandemic, taking a job in Albuquerque hauling concrete. He’d find time in an empty gym here or there, while teammates like Martinez would head to the area around familiar neighborhoods and play pick-up games on the concrete outdoor courts.

“Everyone faces some type of adversity in their life,” Zambrano said. “It comes down to whether you’re going to push through it or fall to it. In our case, everyone here on the team, we were able push through it and here we are today.”

What a great photo of Tyrique. Also, Aidan Moreno (USW) is in the photo. He had the great defense and block. You can only see his hair and hand. Also Aidan was born in Santa Fe. He completed through middle school in Sf but he did graduate Cleveland in Rio Rancho. Just giving an honorable mention since you didn’t mention him in the picture.