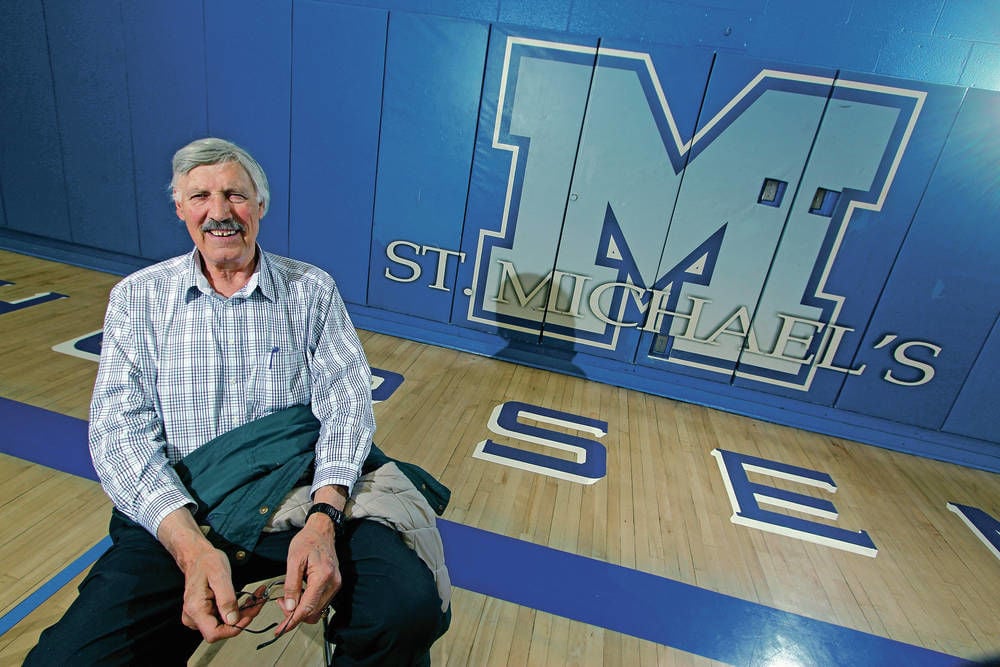 Nick Pino parlayed his high school basketball success into a scholarship to attend Kansas State. As a senior, Pino was part of a team that won the Big 8 title in 1967-68, and he averaged 11.7 points and 8.3 rebounds per game. Luis Sánchez Saturno/New Mexican file photo 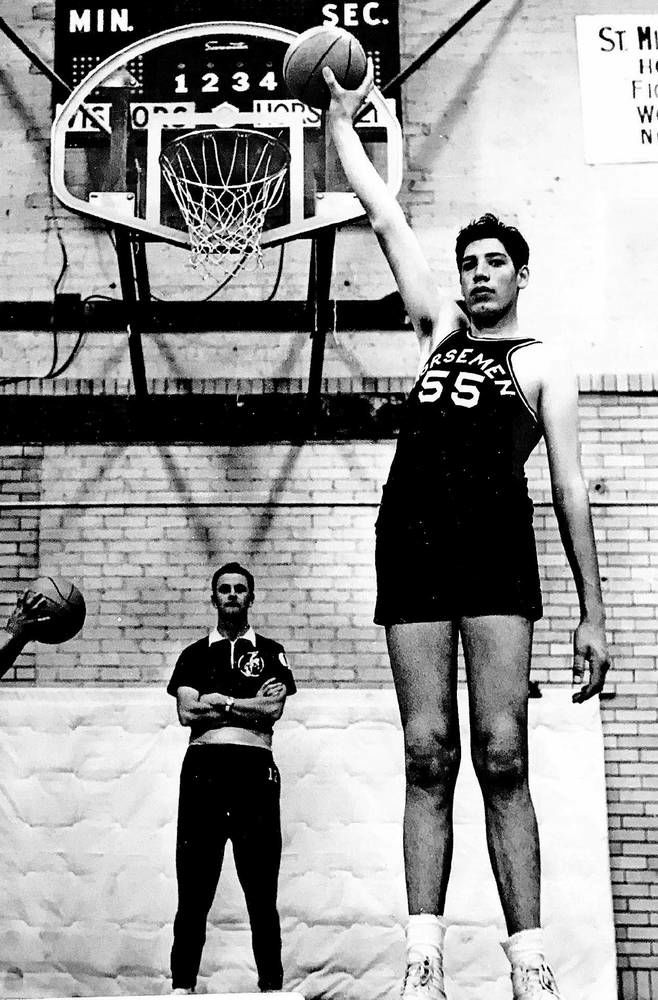 Nick Pino, a former basketball star at St. Michael’s High School and Kansas State University, set the state’s single-game scoring mark with 80 points on his way to setting the single-season record of 1,033 points in the 1962-63 season. Pino died Sunday at 75. Courtesy image

Nick Pino parlayed his high school basketball success into a scholarship to attend Kansas State. As a senior, Pino was part of a team that won the Big 8 title in 1967-68, and he averaged 11.7 points and 8.3 rebounds per game. Luis Sánchez Saturno/New Mexican file photo

Nick Pino, a former basketball star at St. Michael’s High School and Kansas State University, set the state’s single-game scoring mark with 80 points on his way to setting the single-season record of 1,033 points in the 1962-63 season. Pino died Sunday at 75. Courtesy image

He was called “Nick the Stick,” but to the people who knew legendary St. Michael’s basketball player Nick Pino, he was the “Gentle Giant.”

Alice Pino said her brother had battled the disease for several years and spent the past couple of weeks in the hospital.

“As a family, we always had hope that he would stabilize enough to go through some rehab therapy, so he could be independent again.” Alice Pino said. “He was a very independent person.”

Pino was a three-year varsity player at St. Michael’s and a part of the famous “Mighty Midgets” squad that featured no starter taller than 6 feet that ran and pressured opponents all the way to the Class 1A championship game in the 1961-62 season. He, however, was not a key member of that team because his lack of quickness offset his size.

That changed in Pino’s senior year, as he became the first player in the state to surpass 1,000 points in a season by finishing with 1,033 points. It remained the state record until 2013.

He also is one of two players to score at least 80 points in a game, which he did against El Rito on Jan. 12, 1963. The “Nick the Stick” moniker was affixed to him during his senior year because of his long, lanky frame.

David Fernandez, a 1962 St. Michael’s graduate, said Pino’s maturation as a player from one year to the next was remarkable to see.

“The following year, it was like day and night,” Fernandez said. “He became one of the beautiful players, just a really good basketball player.”

Kathleen Shelley, the daughter of legendary Horsemen head basketball coach Dick Shelley, said Pino was a fixture at her family’s home and was very close to her dad. In fact, coach Shelley flew him to Manhattan, Kan., to visit the Kansas State campus.

One of Kathleen Shelley’s first memories was of the giant lifting her one-handed onto the roof.

Pino parlayed his basketball success into a scholarship to attend Kansas State after an intense recruiting period in which more than 100 colleges tried to woo him to their campus. As a senior, Pino was part of a team that won the Big 8 title in 1967-68, and he averaged 11.7 points and 8.3 rebounds per game.

A knee injury late in Pino’s senior season had a lingering impact, as it affected him when he tried out for the NBA’s Los Angeles Lakers. He went into the insurance business, working in Kansas for a while before returning to Santa Fe.

While Pino’s size and skills on the hardwood brought him fame, his friends saw a kind person who was never cross with anyone he met.

“He was a gentle giant,” said Tommy Vigil, a 1963 St. Michael’s graduate and teammate of the 7-footer. “He was one of those guys who wasn’t a bully or anything like that. He was very nice individual.”

Alice Pino said his brother’s kindness knew no bounds, and he never let his fame affect him.

“He had a big heart, and it was as a big as his body,” Alice Pino said. “He was a big man with a big heart. He was an all-around kind person and that’s why he was ‘The Gentle Giant’ of our community.”

Fernandez said he and Pino became good friends later in life, so much so that they regularly had lunch with a group of St. Michael’s and Santa Fe High graduates on Fridays over the last several years that became a cherished routine. Often times, people approached the group, but always went to Pino first.

“Half the time, he didn’t know who the people were, but half the time, he did,” Fernandez said. “But he would always introduce them to us. ‘Do you remember David or remember this guy?’ Whoever it was that was with us. He was never someone who thought, ‘Oh, I should take all the glory.’ He was just very friendly and such a nice person.”

Alice Pino said the family is in the process of making arrangements and information for services will be available in the next couple of days.

I graduated from St. Michael's with Nick in 1963. Later, I married a 3rd generation University of Kansas graduate who made me aware of the fierce rivalry with Kansas State. At our 50th high school reunion, Nick reminded Kathy of the 1968 season when K State beat KU at Allen Fieldhouse on their way to the Big 8 championship.

Nick and I roomed at K-State with the Wartell brothers and Ab Hubert from the summer of '68 to the spring of '69. One memory I have is of the time we decided to paint the walls of our rental house. Nick painted all the high corners, I painted the middle and Rich Wartell painted the bottoms, all according to height. Ha! I will never forget how Nick had to put an army foot locker at the end of his bed as the bed wasn't long enough. I saw Nick only a few times over the past years, but he was, as many others have commended, truly one of the nicest guys I ever met.

Deepest empathy to Mr. Pino's family and his loved ones. He was one of the kindest, genuinely sincere human beings I've ever had the blessing of meeting and I'd imagine God ever ever had the pleasure of creating. Without admitting to having favorites, I'd bet Mr. Pino ( Yes he always to me to call him Nick) was one of God's most proudest creations. RIP Nick.

Truly the end of an era. I first met Nick at K-State in the late '60's, when he was playing for the great coach, Tex Winter. Tex was a genius at taking big Kansas farm boys and making them great BB players. This he did, in spades, with Big Nick.

As the article describes, Nick was, indeed, a "Gentle Giant". He had a heart bigger than the all outdoors. Recently, we spent many a Sat afternoon watching the Wildcats play on TV and talking BB. Nick was Purple thru & thru.

Nick will be greatly missed by myself, his family, his many SantaFe friends, and, particularly, his K-State teammates and his huge K-State family.