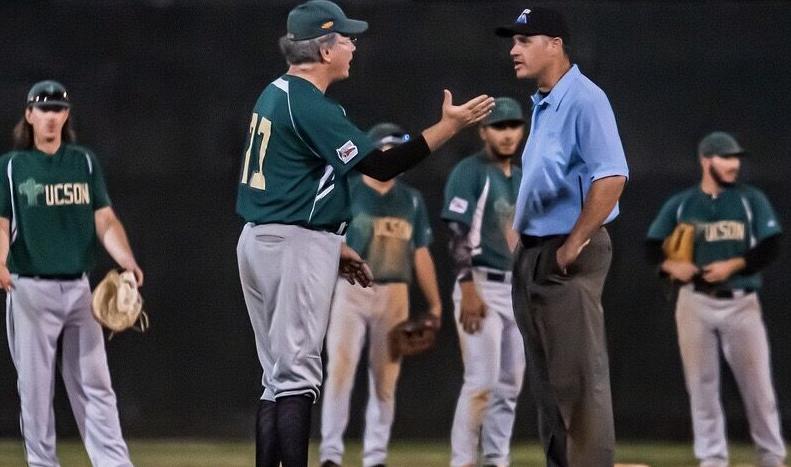 Bill Rogan argues a call during a Pecos League game in 2019. Then the manager of the Tucson Saguaros, Rogan was slated to be the skipper of the Santa Fe Fuego in 2020 before the season was canceled due to the pandemic. He will instead be the play-by-play announcer for all Pecos League games during its abbreviated summer session in Houston starting in July. 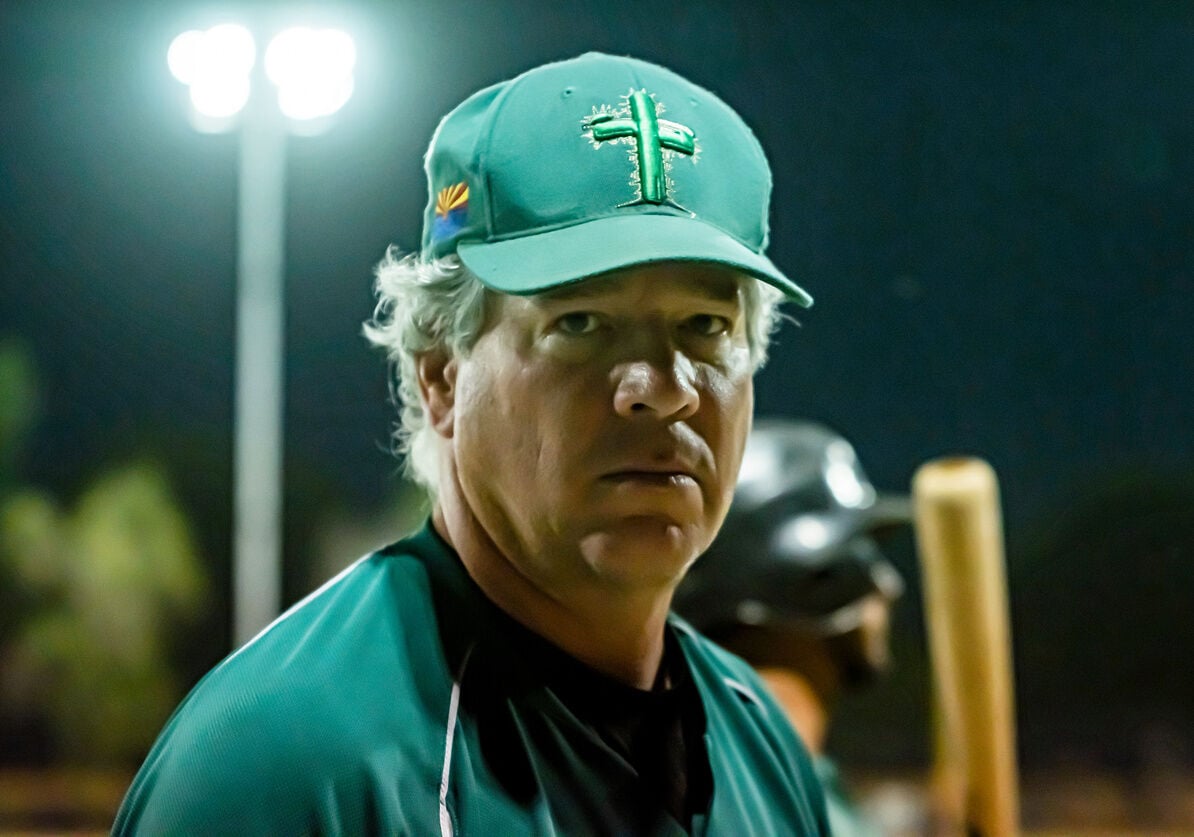 Manager Bill Rogan during his one and only season as manager of the Tucson Saguaros in 2019. He was set to lead the Santa Fe Fuego before the pandemic caused the season to be called off.

Bill Rogan argues a call during a Pecos League game in 2019. Then the manager of the Tucson Saguaros, Rogan was slated to be the skipper of the Santa Fe Fuego in 2020 before the season was canceled due to the pandemic. He will instead be the play-by-play announcer for all Pecos League games during its abbreviated summer session in Houston starting in July.

Manager Bill Rogan during his one and only season as manager of the Tucson Saguaros in 2019. He was set to lead the Santa Fe Fuego before the pandemic caused the season to be called off.

The names and faces have certainly changed over the years, but the one constant for professional baseball types stepping foot into Fort Marcy Ballpark for the first time is pretty much unchanged.

“My first thought was, ‘Man, that’s a short outfield going down the first base line,’ ” Bill Rogan said. “The next was, ‘Where’s the clubhouse? How are guys supposed to get dressed?’ ”

Welcome to New Mexico’s capital, Bill, where baseball is welcome but not a lot is done to alter the landscape to accommodate it. The City Different has been home to the independent Pecos League’s Santa Fe Fuego since 2012, and Fort Marcy Ballpark, with its myriad quirks and softball-like final scores, has been the team’s antiquated and under-funded fortress.

Rogan was hired by the league after the 2018 season and was told he’d skipper either the Fuego or the club in Tucson. He’d land in Santa Fe, he was told, if then-Fuego manager T.J. Zarewicz elected not to return. Zarewicz did return and Rogan was dispatched to the dry heat of southern Arizona.

He led the Saguaros to a 30-30 record, having dealt with every obstacle the Pecos League throws at you: Painfully long road trips, little to no fan interest in most towns and the challenge of staying focused day in and day out for little pay.

“I actually like the heat but I would have preferred Santa Fe that first year,” Rogan said. “I can’t tell you how happy I am to finally get in there. People talk all the time about how hard it is to find pitchers who want to go there because of the field’s [small] size, but I was ready for it.”

Rogan’s shot with the team, of course, hasn’t yet come to fruition. The Pecos League canceled its 2020 season last month over the coronavirus pandemic but has since announced that it will hold a fans-free short season at a single location in Houston beginning July 1.

In truth, the Fuego will play this summer — but not in a form anyone will recognize.

They’ll be one of five teams represented in the summer league along with Tucson; Trinidad, Colo.; Roswell; and Salina, Kan. Each team will play a 32-game regular season through late August, but as Pecos League founder and President Andrew Dunn said last month, this isn’t the Fuego fans back home will know.

“It’s basically a different league with players from all over, not just the teams we had,” Dunn said. “The team names are the same but that’s about it. And no fans. We can’t risk it.”

Rogan might actually be the closest thing to a familiar face for Santa Fe in the summer league. Offered a job as a manager of one of the teams, he instead welcomed the task of being the play-by-play man on the league’s streaming platform when games begin July 1.

He’ll call one or two games a day six times a week — the league has a built-in off day every Tuesday — until a champion is crowned Aug. 27.

“I told Andrew I didn’t want to manage a team that was thrown together in tryouts because the team I was building for [Santa Fe] was coming together pretty good,” Rogan said. “But this broadcasting thing, I said, ‘Heck yeah I’d do that.’ ”

It’s not a huge leap from Rogan’s comfort zone. A well-spoken baseball man with a die-hard fan’s love of the game, he has experience in the booth from his time in New York. Born in the Bronx and raised in Rockland County an hour north of New York City, he spent five years in the mid-1990s doing radio play-by-play for the Hudson Valley Renegades of the short-season Class A New York-Penn League.

It followed his early days as a player in college at Duquesne and later in various men’s leagues around the country. Rogan, 58, eventually found his way to the Rocky Mountains and calls Denver home.

Until the pandemic hit, he was working for the Colorado Rockies’ ticketing department and managing a few months of the year in the Pecos League.

The author of six books about baseball, he is having one of them currently made into a movie and another, Life Ain’t the Same in the Pecos League, chronicles his season in Tucson.

It it scheduled for release next month.

Having one book turned into a film and the others giving him a chance to share his love for the game, Rogan revels in the chance to talk about his journey that led him across the country to the Pecos League and now to Santa Fe.

He said he learned about the league while surfing the internet in 2017. He did some research, found out there was a team not far from Denver and drove south to watch a game between Trinidad and Garden City, Kan. He came away thinking he could land himself a spot managing one of the teams, so he began corresponding with Dunn.

Within months, he had himself a job offer.

“The grind, the long days, all that stuff doesn’t bother me in the least,” Rogan said.

“None of it is exhausting. I enjoy it. If I wasn’t managing the team or broadcasting it, I’d be at the game myself or maybe watching one on TV. I’d gladly go 162 [games] in the Pecos League.”

NOTESThe Fuego will open the Pecos League summer season at 4 p.m. July 1 against Roswell. Details about the streaming broadcast will be revealed before the season begins. ... A trailer for the movie based on Rogan’s book Still Pitching is available on YouTube. It stars Jason Frederick as Rick Fisher, a former teammate of Rogan’s in a men’s baseball league in Colorado.

Fisher was a talented pitcher in his youth, drawing interest from professional clubs. He also dealt with a number of troubling personal issues that derailed his career. Rogan said Fisher always used baseball as a means to feel normal.