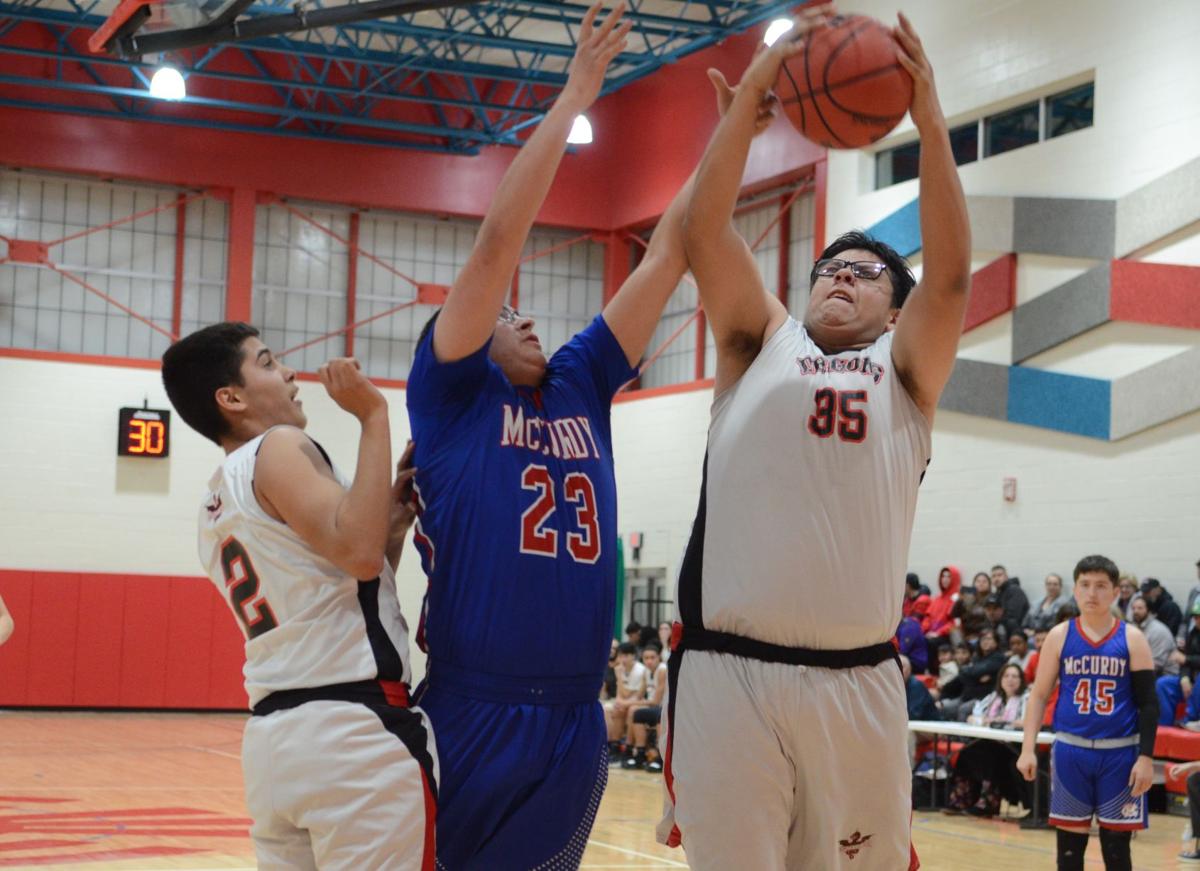 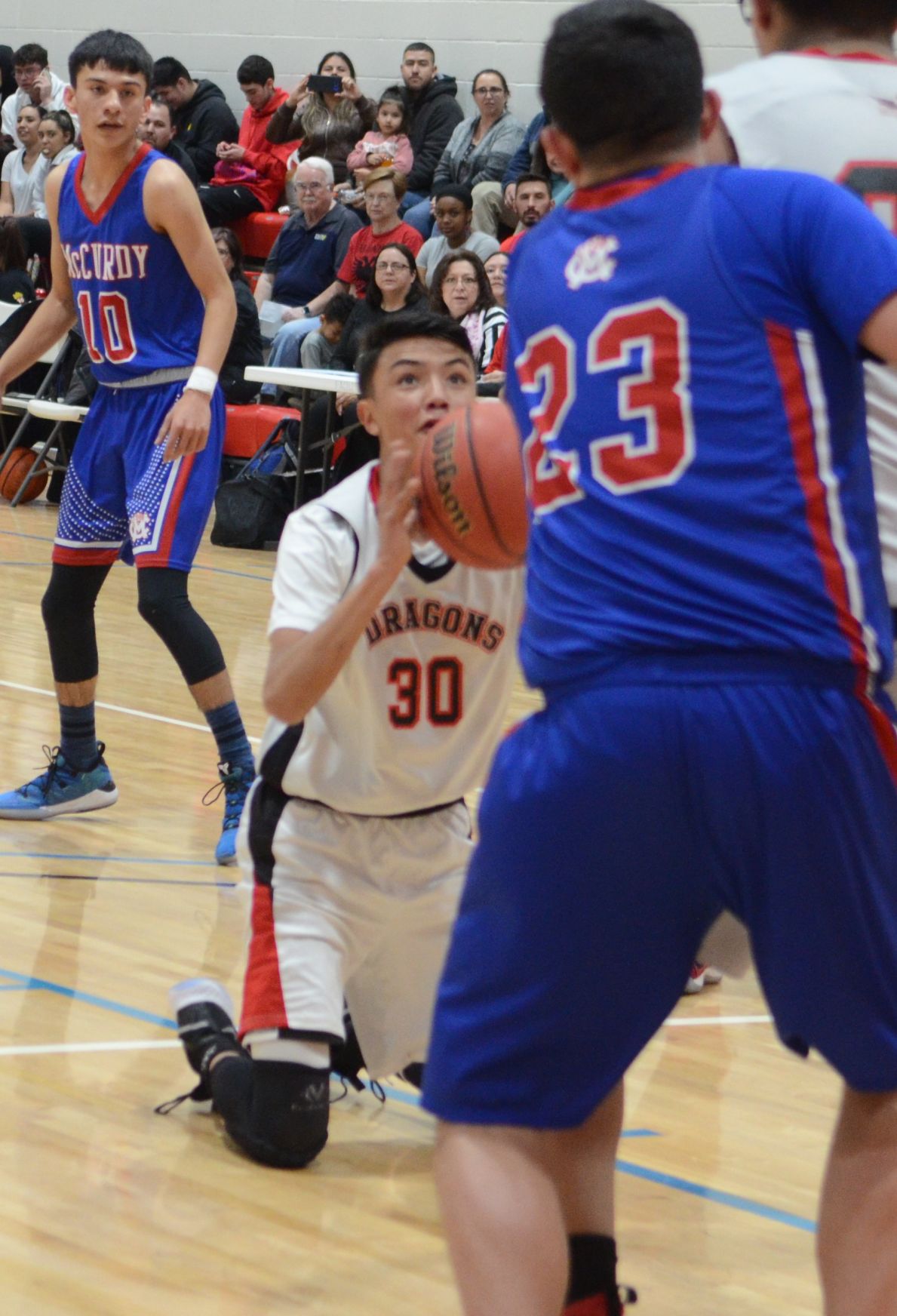 Monte del Sol's Axel Lozoya (No. 30) shoots from his knees during the second quarter of a District 2-2A game against McCurdy at the Institute of American Indian Arts on Thursday. The Bobcats forced 24 turnovers in a 74-55 win. 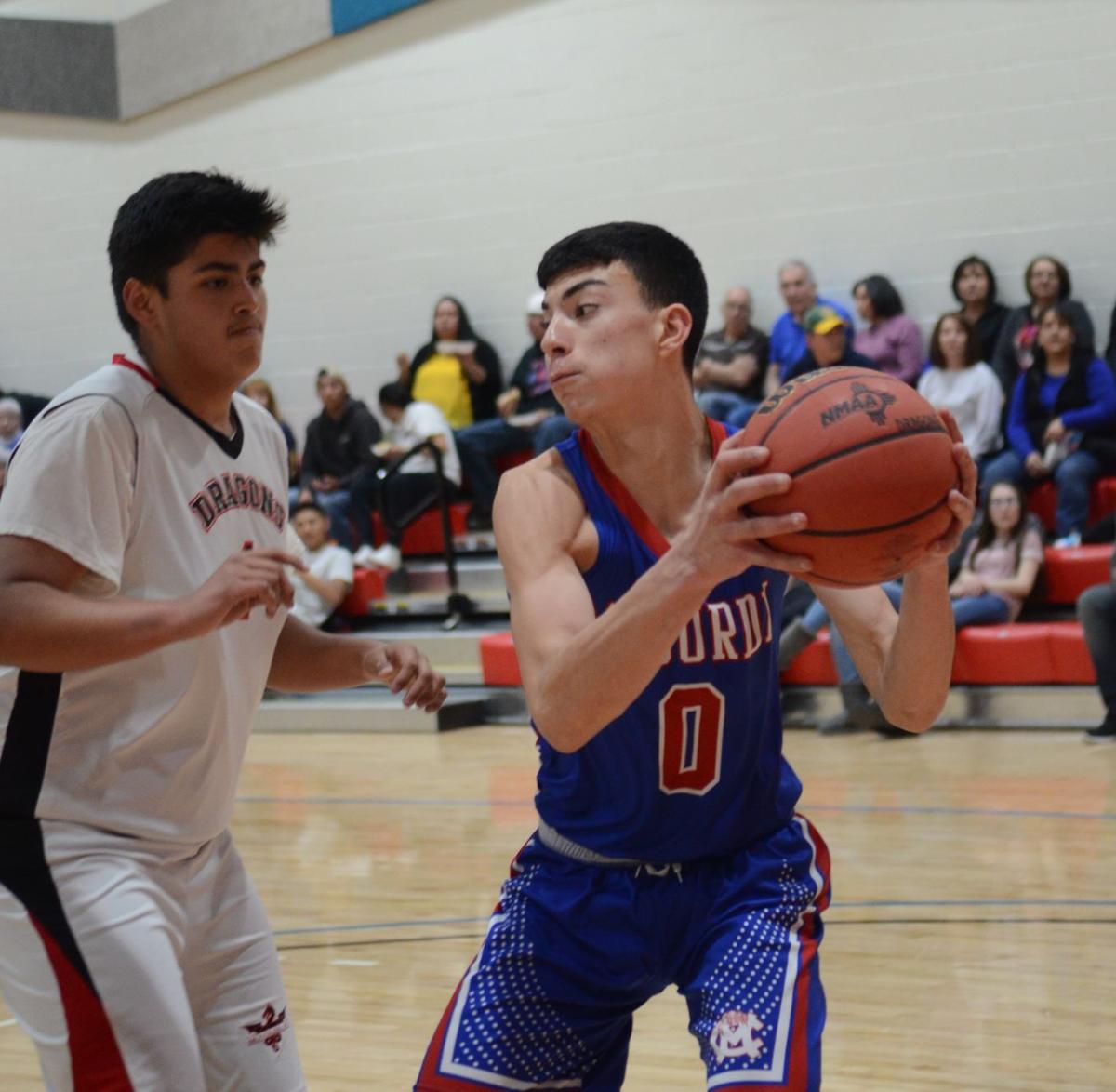 McCurdy's Andres Martinez grabs a rebound in front of McCurdy's Luciano Valles during the first quarter of a District 2-2A game at the Institute for American Indian Arts on Thursday. Martinez had 27 points to lead the Bobcats to a 74-55 win

Monte del Sol's Axel Lozoya (No. 30) shoots from his knees during the second quarter of a District 2-2A game against McCurdy at the Institute of American Indian Arts on Thursday. The Bobcats forced 24 turnovers in a 74-55 win.

McCurdy's Andres Martinez grabs a rebound in front of McCurdy's Luciano Valles during the first quarter of a District 2-2A game at the Institute for American Indian Arts on Thursday. Martinez had 27 points to lead the Bobcats to a 74-55 win

The Monte del Sol boys basketball team is still searching for the diamond in the rough.

It wasn’t like the Dragons hadn’t prepared for the 1-2-1-1 press, also known as the “diamond press,” for pretty much the entire season. Unfortunately, preparation did not lead to execution Thursday night.

The McCurdy Bobcats employed the defense against Monte del Sol to start the second half of a key District 2-2A game at the Institute of American Indian Arts wellness center, and the Dragons did absolutely everything wrong against it.

McCurdy collected 16 of its 24 turnovers after the break, and it went on a convincing 74-55 win to improve to 4-0 in district play with just nine days left in the regular season.

The press wasn’t something that Bobcats head coach Ernesto Espinoza came up with by chance. It just happened that opportunity presented itself coming out of the half as a means to test the young, inexperienced Dragons.

“It was something we wanted to do,” Espinoza said. “We talked about it a little bit. We were going to try it out and see how it worked.”

No one wearing McCurdy blue and red was disappointed by the results. After Monte del Sol tied the score at 29-all on junior guard Axel Lozoya’s 3-pointer 11 seconds into the second half, the press flummoxed the Dragons. It forced turnovers on four of their first seven possessions, and that fueled a 12-2 Bobcats spurt for a 41-31 lead by the visitors.

Three more turnovers during into six unanswered points for McCurdy (12-10, 4-0 in 2-2A), and 6-foot-4 senior wing Andres Martinez was responsible for every one of them. It was the start of a 16-point second half as he finished with 27 points and grabbed 20 rebounds. Twelve of them came in the second half, and six were on the offensive end.

Martinez admitted he was a little nervous to start the game because Monte del Sol (11-12, 4-1) could match up with him with four players who are 6-3 or taller.

“Rebounding is especially important, especially with second-chance points,” Martinez said. “That is what coach focuses on the most — rebounding.”

There was a moment when the Dragons entertained thoughts of pulling of a remarkable comeback from a deficit that was as large as 18 points early in the fourth quarter. They scored nine straight points, capped by consecutive 3-pointers by 6-5 junior wing Brayan Roybal. The second one ended up being a four-point play after Diego Delgado fouled him that cut the margin to 57-48 with 5:37 left in the game.

It was the last salvo as the Bobcats scored the next 10 points, thanks to three Monte del Sol turnovers that short-circuited any hopes of a comeback. Ralph Casaus, the Dragons’ first-year head coach, said his team did not execute its press-breaker like he taught.

“We have been really good against it, but [Thursday] was one of those days where we were dribbling with our head down,” Casaus said. “We weren’t making passes. And we’re not moving the ball up the court. We’re staying back and there was no movement.”

The first half, the Dragons flexed their interior muscle, as they pounded the ball inside to stay within 29-26 at the break. They got 10 first-half points out of sophomore post Ivan Morales, and freshman Kevin Enriquez added eight more. In all, they made 13 of 31 shots and had 10 offensive rebounds by the break.

“We stayed focused, and we were focusing on Andres,” Casaus said. “The second half, we lost focus of everything. And I mean everything.”

The game carried more significance than just a battle between the co-district leaders. McCurdy is ranked just 18th in the latest MaxPreps.com Freeman rankings, which the New Mexico Activities Association uses to select and seed teams for the 16-team state tournament in each class. Monte del Sol came in at 25th, which meant the winner not only had the inside track to the district title, but likely the only berth a 2-2A team would get this season.

It underscores the overall weakness of the district, as the bottom three teams in 2-2A (Academy for Technology and the Classics, Tierra Encantada and Desert Academy/Santa Fe Waldorf) are ranked 31st, 33rd and 34th respectively, out of 34 teams in 2A.

“This is why I am hoping that we can get to 16, maybe 17 wins, so that maybe we can climb in the rankings and maybe get a 12-spot,” Espinoza said.