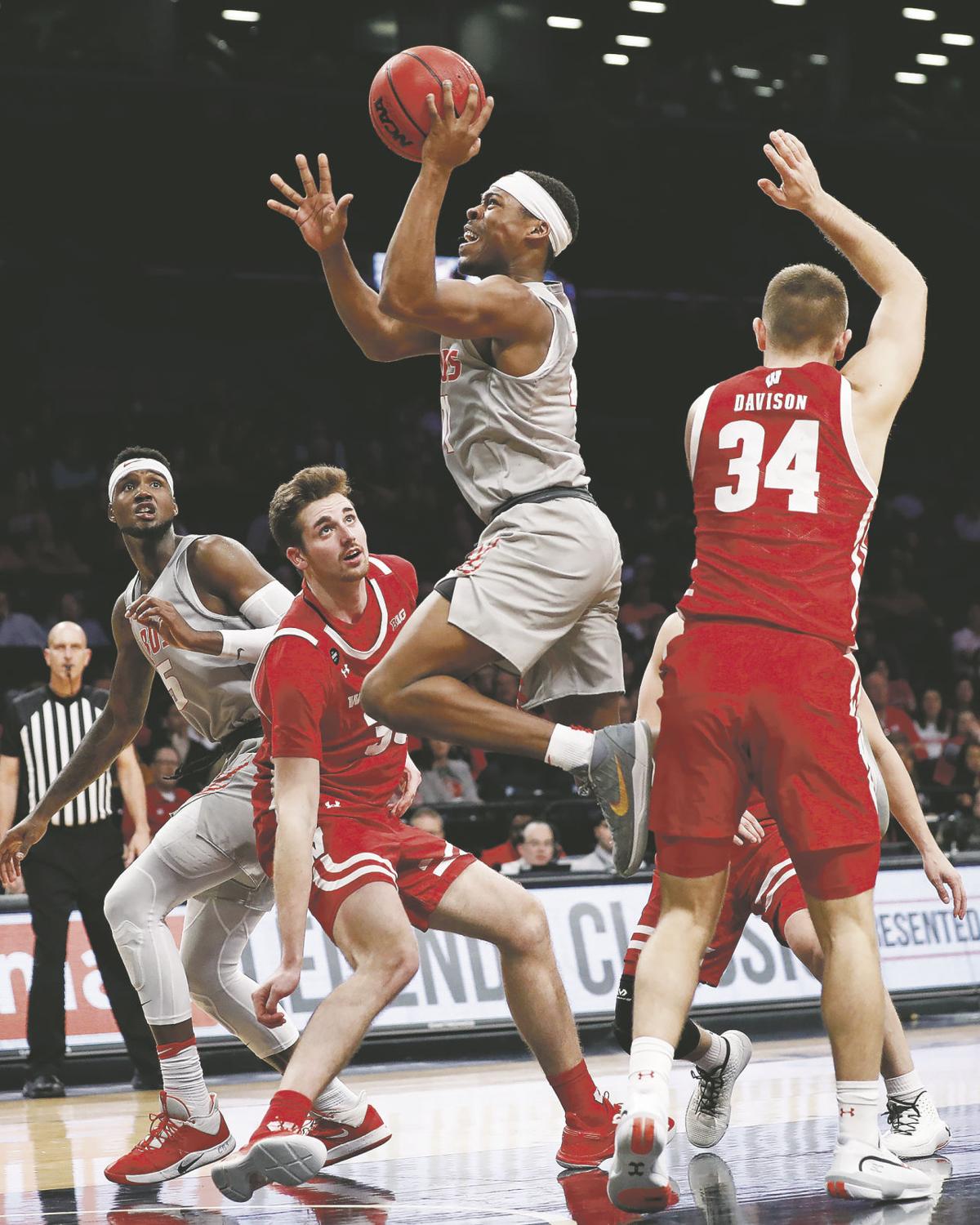 The Lobos’ JJ Caldwell, center, is shown during a Nov. 26 game in the Legends Classic at Barclays Center in New York. The junior guard has been charged with misdemeanor battery against a household member. 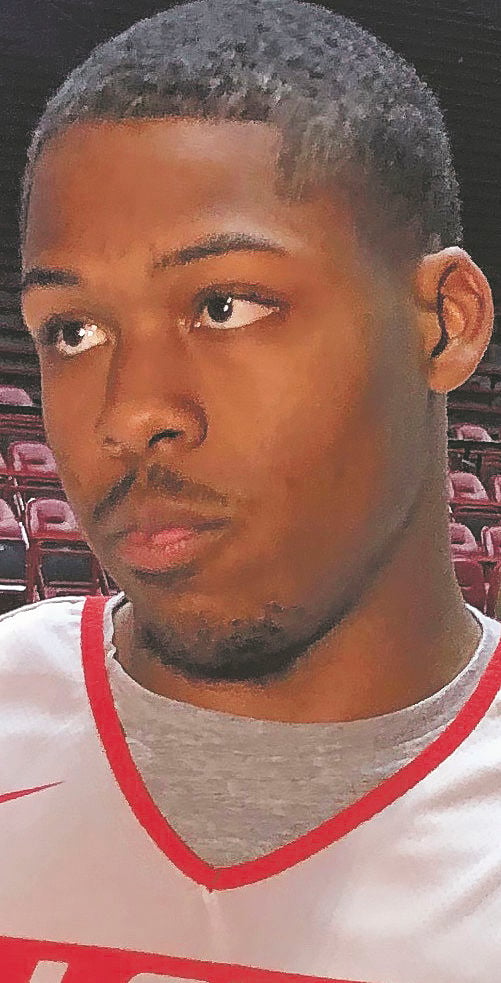 University of New Mexico men’s basketball player JJ Caldwell has been charged with a misdemeanor stemming from a December incident in which he is alleged to have pushed and choked an ex-girlfriend outside an Albuquerque nightclub.

Caldwell is also facing a more serious felony charge for domestic battery against that same woman from a separate incident that took place during the summer, according to a criminal complaint filed by the Albuquerque Police Department.

Caldwell is a junior who started the first 13 games of the season before being suspended indefinitely Dec. 22 without explanation.

“He’s been charged with misdemeanor battery against a household member, a charge alleging he injured a now ex-girlfriend on Dec. 16, 2019,” said John Sugg, the district attorney for the 12th Judicial District in Alamogordo.

Albuquerque police filed a summons stemming from a Dec. 14 incident involving Caldwell and his ex-girlfriend. Albuquerque police spokesman Gilbert Gallegos said it generally takes about a month for a summons to work its way through the court system, which is then mailed to the suspect for an appearance in court.

Caldwell’s misdemeanor charge follows the Dec. 14 encounter between Caldwell and his ex-girlfriend outside Posh Nightclub. The Albuquerque police report says the two argued inside the club and again outside when the woman was waiting for a Lyft ride home. The report says matters escalated and that Caldwell pushed her up against a car during the argument.

The two went their separate ways before her ride arrived; Caldwell returned home and she went to a friend’s residence in the same apartment complex in which he lived. She went to his residence when she discovered her friend wasn’t home and, according to the report, things again turned physical. The report says the woman accused Caldwell of striking her several times with an open hand, then grabbing her by both arms and pushing her against the wall where he put both hands around her neck.

The woman spoke with Albuquerque police two days later and police noted minor bruising on her arms but no signs of injuries to her neck or face.

“Even though an official charge has been filed by the Albuquerque Police Department, we still need to finish our investigation, including talking with some witnesses and doing some followup investigations,” Sugg said. “We’re actually going to be taking a trip later this week to Albuquerque to interview some witnesses.”

The potential felony case — in which the Albuquerque police has not yet filed charges but, according to Sugg, has the legal authority to do so — involves the summer incident. Caldwell and the woman were dating and shared a residence. The woman initially approached Albuquerque police Dec. 3 and said she could not recall if the incident occurred in late June or July.

She said the couple had been out drinking on the night in question but became separated. She told police she got a ride home from a friend and things between she and Caldwell quickly escalated. According to the Albuquerque police report, he pushed her into the bathroom and shoved her backward into a tub. The woman said she lost her footing and hit her head on the tub.

The report says she tried to leave but Caldwell shut the door and blocked the exit, grabbing her by the throat until she lost consciousness.

The woman went to the hospital the next day and was told she’d suffered a “severe concussion,” according to the Albuquerque police report. She told police she had photos of her initial injuries but did not immediately provide them during the Dec. 3 investigation with police.

Caldwell has not played since his suspension was announced. The university has still not clarified why he was suspended or when he might come back. Lobos head coach Paul Weir said last week that there was no change to Caldwell’s status and a message left with UNM athletic director Eddie Nuñez on Monday seeking clarification on Caldwell’s eligibility was not returned.

Caldwell and his attorneys filed a lawsuit against UNM on Jan. 2 seeking his immediate reinstatement, as well as undisclosed damages that included a lift to his temporary ban to the school’s campus and permission to remain in his Lobo Village residence, from which he had been served an eviction notice shortly before the Christmas holiday.

He’s back, probably: JaQuan Lyle’s two-game suspension has been served and Weir said he is potentially available for the Lobos’ next game, Saturday at home against Wyoming.

A 6-foot-5 guard, Lyle hasn’t played since Jan. 18 when he suffered a late-game knee injury in a loss at UNLV. It forced him to miss the next two games, the second of which was a Jan. 25 loss at Nevada. He remained home while the rest of the team was in Reno, and that night he arranged for an off-campus party at a rented house. It ended with a shooting that left two people, including a UNM student-athlete, injured with non-life threatening gunshot wounds.

Weir announced a two-game suspension for Lyle just moments before the Lobos’ Jan. 29 home loss to San Diego State, saying it was for “detrimental conduct” to the team.

The Lobos have three in a row without Lyle, their leading scorer and one of three seniors on the opening day roster.

On the mend: Vance Jackson is getting closer to returning and Weir hasn’t ruled out the possibility that the 6-foot-9 junior could be on the court in time for Saturday’s game.

Jackson hasn’t played since exiting the Jan. 15 loss at Colorado State with a left knee injury. An MRI revealed no permanent damage but significant internal bruising. He has missed the last five games with the Lobos losing four of them.

His injury came after he landed awkwardly on a failed alley oop attempt with Lyle in the game at CSU. He limped off the court under his own power but hasn’t played since. Weir initially reported that it was a “two- to four-week thing.”

Jackson reported on his Twitter account on Jan. 31 that he’d begun running again and over the weekend Weir said he felt optimistic that Jackson could be back as early as this week.