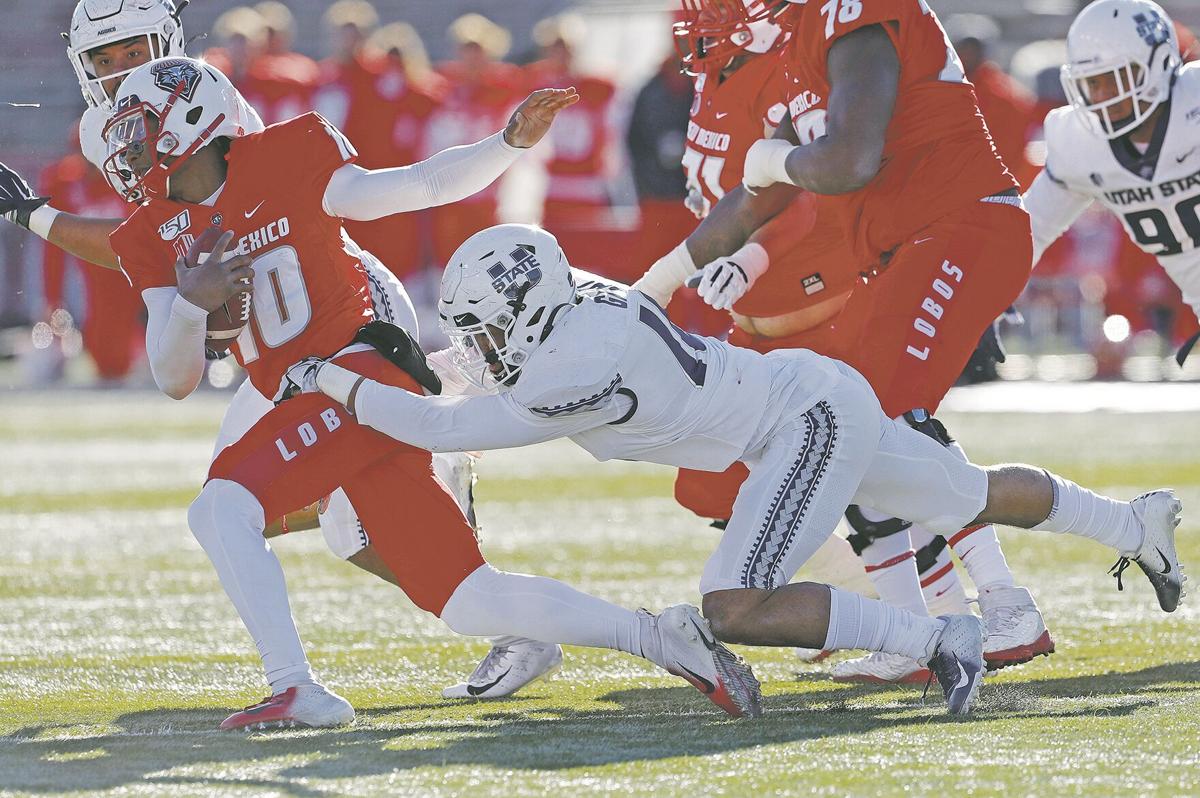 UNM quarterback Trae Hall, left, is sacked by Utah State defensive end Tipa Galeai on Nov. 30 in Albuquerque. The Lobos are battling a COVID-19 outbreak but are optimistic the team can play Oct. 24 in Colorado and host a home game Oct. 31. 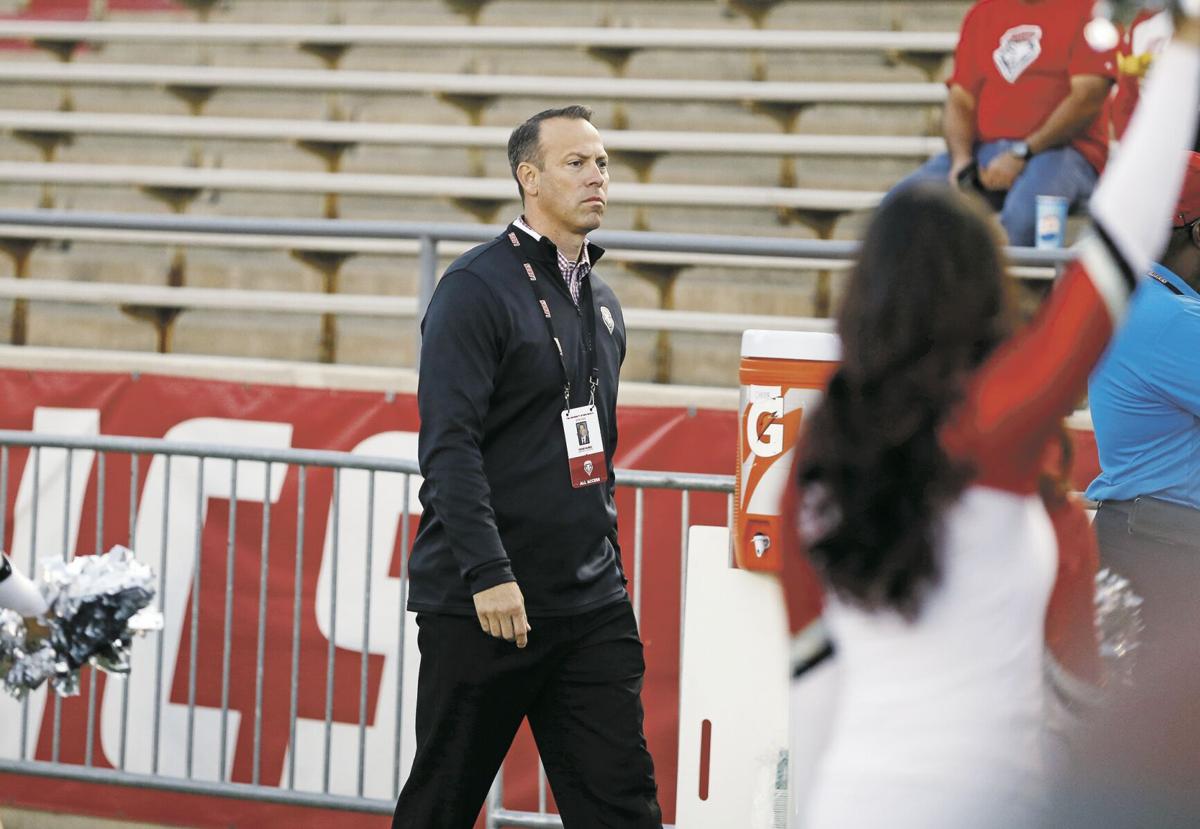 UNM athletic director Eddie Nuñez said the Mountain West would not make a determination about any opening-day games set for Oct. 24 until next week.

UNM quarterback Trae Hall, left, is sacked by Utah State defensive end Tipa Galeai on Nov. 30 in Albuquerque. The Lobos are battling a COVID-19 outbreak but are optimistic the team can play Oct. 24 in Colorado and host a home game Oct. 31.

UNM athletic director Eddie Nuñez said the Mountain West would not make a determination about any opening-day games set for Oct. 24 until next week.

ALBUQUERQUE — The typical closed-door hustle and bustle of the University of New Mexico’s south campus football facility was a ghost town Thursday, marking the first significant outbreak of COVID-19 for the state’s flagship athletic department since the pandemic arrived in March.

The Lobos were scheduled to practice Thursday morning and Friday in preparation for their Oct. 24 season opener at Colorado State.

Instead, nine positive COVID-19 cases — eight players and one member of the support staff — and up to a dozen more potential positive results forced UNM officials to send everyone home until at least Saturday.

On Thursday, athletic director Eddie Nuñez said he was “hopeful” that the Lobos would play in Week 1. He’s even more optimistic about the Lobos’ chances of hosting its home opener at University Stadium on Oct. 31, a game scheduled for a national TV broadcast on Fox Sports.

At stake is more than wins and losses. UNM is part of a lucrative TV rights contract between the Mountain West Conference and national broadcast partners CBS and Fox Sports.

In a pandemic that forced the cancellation of March Madness, spring sports and all fall schedules except for a truncated football slate of just eight games, the revenue is something of a lifeline for cash-strapped athletic departments like UNM’s.

Adding to the economic issues is the lack of fans at home games. Lobo faithful will not be permitted at University Stadium for at least the first two home games, Nuñez said.

The final two home dates are Dec. 5 and Dec. 12 against Wyoming and Fresno State, and athletic officials are holding out hope that New Mexico’s skyrocketing coronavirus cases will come under control by then, allowing state leaders to ease health guidelines and let a limited number of fans in.

“One of the things that we are all realists about here is understanding that this is a volatile situation,” Nuñez said. “We don’t know what’s happening day by day. We can only put ourselves in a position to make sure that we do everything right and, with that, hopefully have the ability to play.”

Nuñez said the Mountain West, which initiated a rigorous rapid antigen testing protocol Monday, would not make a determination about any opening day game until next week.

There are six games scheduled for Oct. 24 and, as has been the case all season in college football, postponements can come at any moment.

“This is a day-by-day situation, and we have to address it as it comes,” Nuñez said. “We will continue to do what we can and if there’s certain factors that continue to change how we’re going forward if it’s a positive test or different things within directives from the state or conference, we will adjust.”

Gov. Michelle Lujan Grisham said Thursday she couldn’t see UNM playing when COVID-19 cases are reaching record highs across the state. Last week she refused to ease health guidelines that would have paved the way for high school and all youth sports to resume competition.

The New Mexico Activities Association responded by formally suspending the fall campaign, pushing every sport into the spring semester starting in January.

“I have to believe, I do believe, that we have actual evidence that shows that when New Mexicans buckle down and we do everything that we’re being asked of each other — a social contract — we stay the course, I make tough decisions — I made a whole new set again today, or a couple days ago, effective tomorrow — that the numbers come down,” she said during her weekly Facebook address Thursday. “They come down fairly dramatically. It’s steady and we can hold it.”

The school did receive some good news Thursday.

UNM and the city of Albuquerque have been selected to host the NCAA Division I Indoor Track and Field Championships at the Albuquerque Convention Center in March 2023.

It’s the third time UNM has been awarded the meet, having been selected in 2014 and this year.

The event this year was canceled due to the pandemic.

Albuquerque has hosted MWC Indoor Track and Field Championships for the past six years and 11 of the last 15, as well as the Toyota USATF Indoor Championships in 2018 and again in February.

The city of Albuquerque has purchased a new $2.5 million track to replace the 15-year-old one used for past events. Components of the new track are under construction in Italy and are expected to be installed in December.