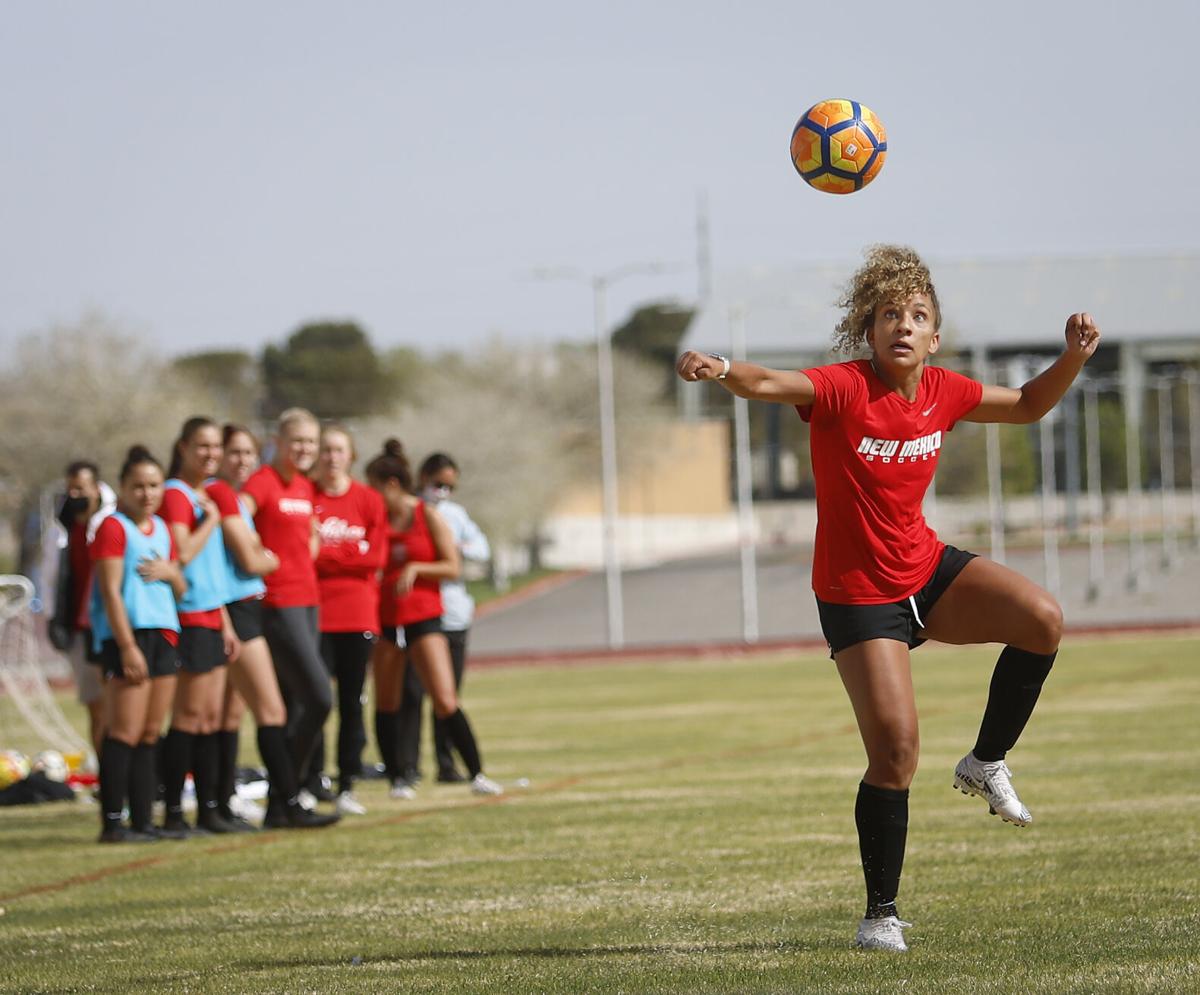 Jadyn Edwards eyes the ball during a scrimmage with her teammates during practice Wednesday morning in Albuquerque. 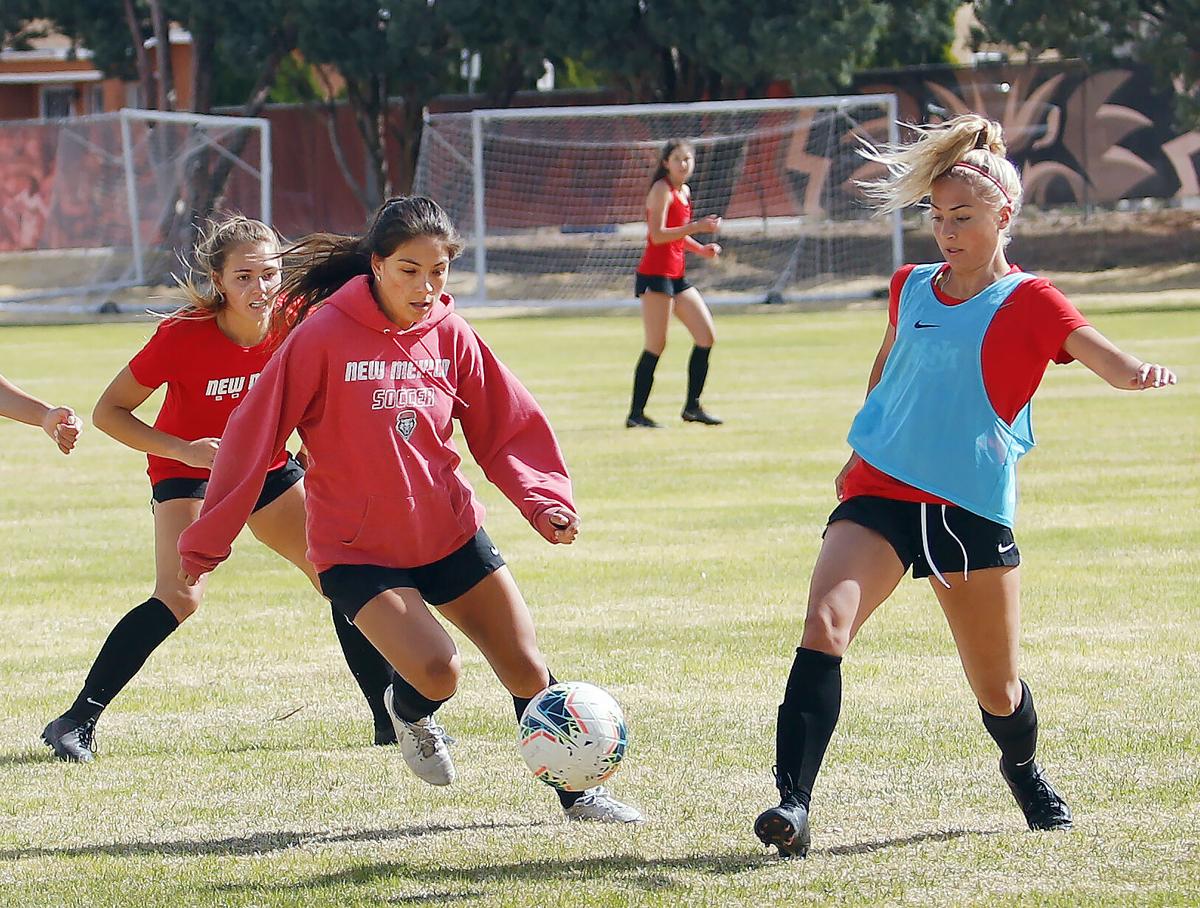 UNM’s Alesia Garcia, left, and Paige Satterlee go after the ball during a scrimmage at practice Wednesday morning in Albuquerque. 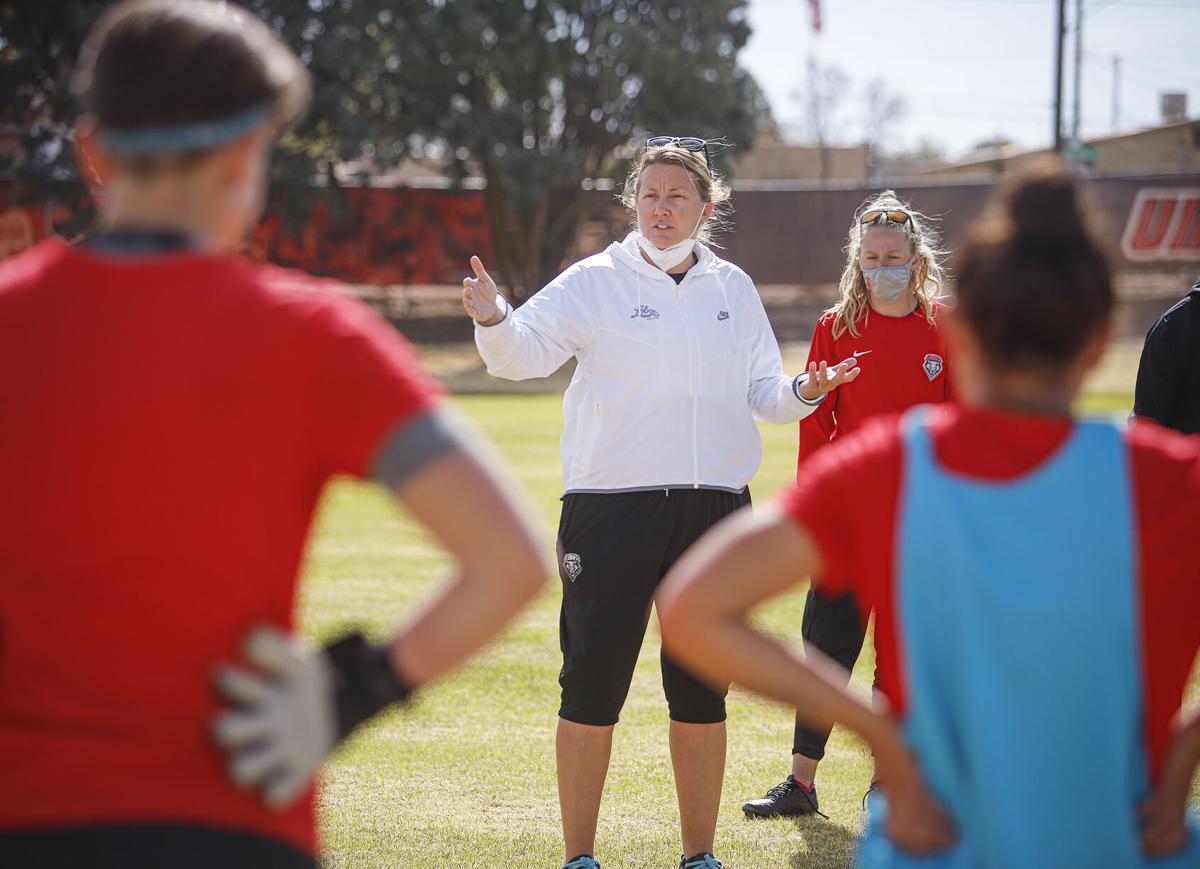 UNM soccer coach Heather Dyche speaks Wednesday with her players in between drills in Albuquerque. 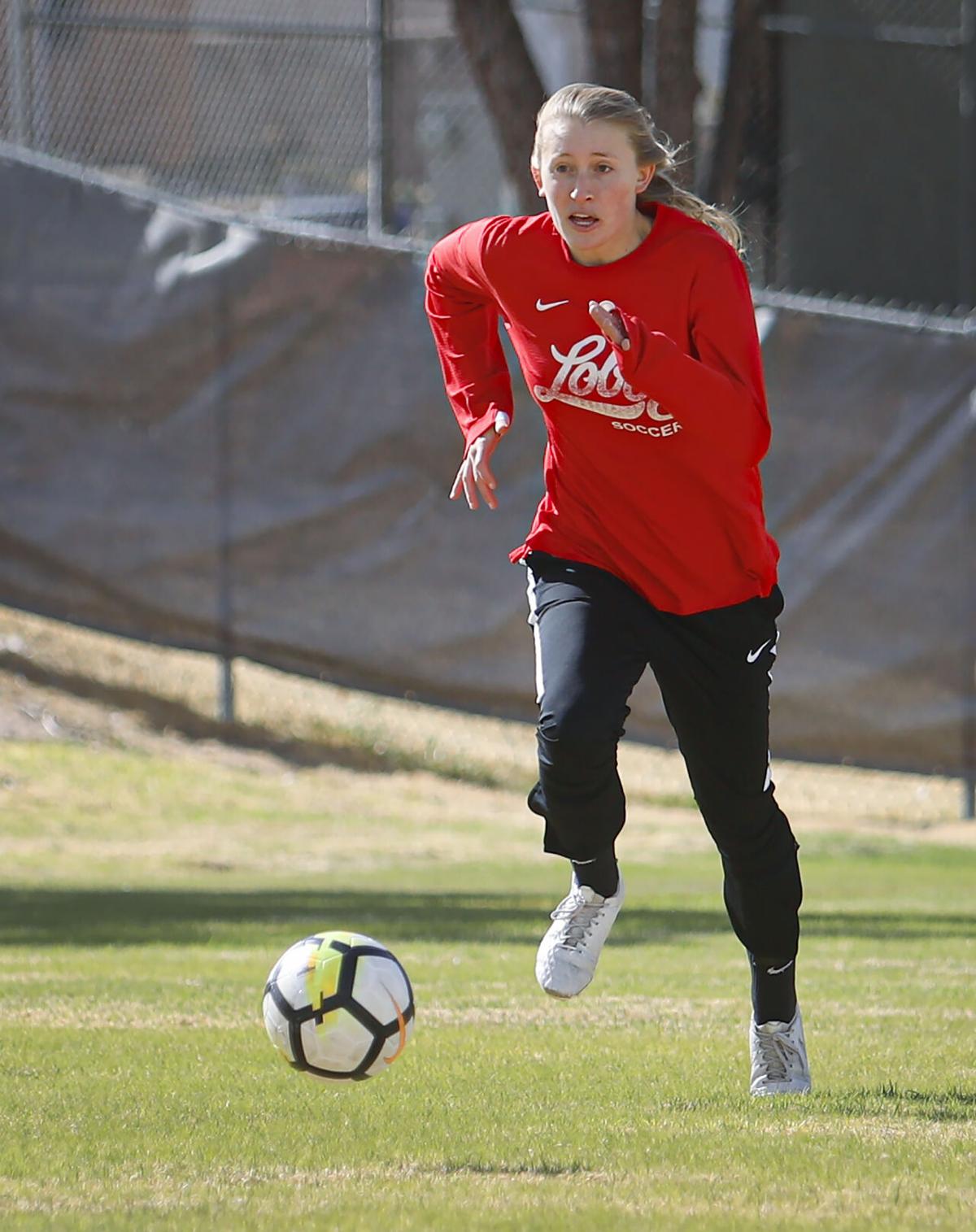 UNM’s Gwen Maly chases after a ball while running drills at practice Wednesday morning in Albuquerque. 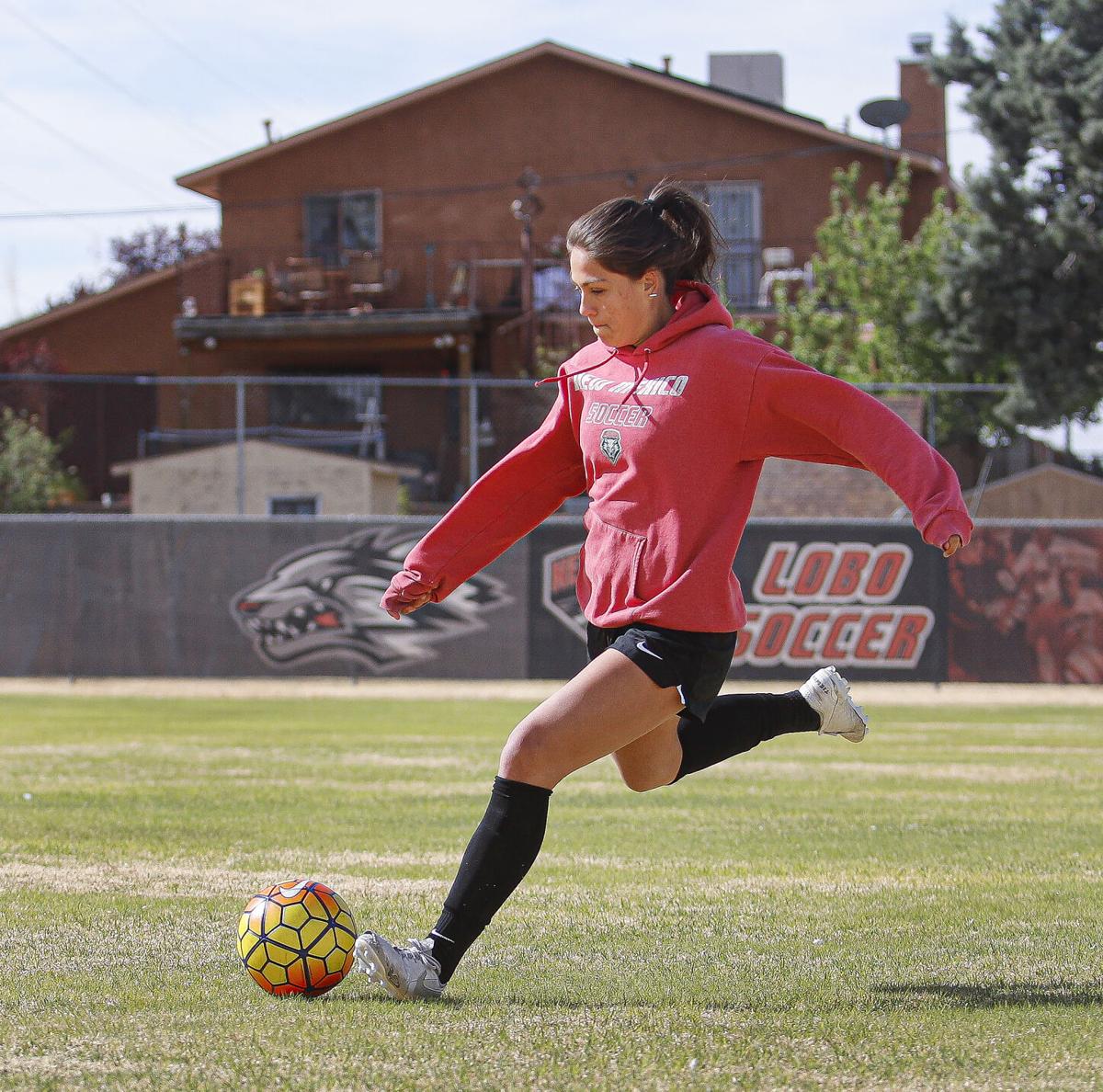 UNM’s Alesia Garcia gets ready to kick the ball to her teammate during Wednesday morning’s practice in Albuquerque.

Jadyn Edwards eyes the ball during a scrimmage with her teammates during practice Wednesday morning in Albuquerque.

UNM’s Alesia Garcia, left, and Paige Satterlee go after the ball during a scrimmage at practice Wednesday morning in Albuquerque.

UNM soccer coach Heather Dyche speaks Wednesday with her players in between drills in Albuquerque.

UNM’s Gwen Maly chases after a ball while running drills at practice Wednesday morning in Albuquerque.

UNM’s Alesia Garcia gets ready to kick the ball to her teammate during Wednesday morning’s practice in Albuquerque.

ALBUQUERQUE — At a school where coach Jim Valvano’s postgame celebration in The Pit has been seared into a nation’s collective memory, Heather Dyche never really had her moment to run around like a coach in search of a hug.

“Nah, I didn’t run up and down the field or anything like that,” she said last week. “But I did need a hug. I’d take one of those.”

The coach of the soccer team at the University of New Mexico and Albuquerque native had just watched Lobos junior Jadyn Edwards score a golden goal in sudden death overtime April 18 to beat San Diego State to win the Mountain West Conference championship and earn an automatic bid to the 48-team NCAA Tournament.

As much as Dyche may have wanted to do her own version of Valvano’s dance, she knows there are bigger opportunities before her. The NCAA Tournament is a national proving ground for a program whose sixth-year coach is on the precipice of accomplishing something far bigger than anyone could have imagined when she was hired in 2015.

“This school has been through some tough times but, you know what, we’re still here and were moving in the right direction,” Dyche said. “We can’t change what happened in the past, but right now, we’ve got a good thing going, and maybe we’re giving people a reason to feel good about soccer at UNM again.”

It was in the waning moments of that win over San Diego State where it almost seemed to collapse. The Aztecs scored the game-tying goal with four seconds left, sending it to overtime.

With the team in shock on the sidelines, it was Jaelyn Hendren’s emotional speech during the changeover that may have saved the team’s season.

“There were so many emotions going through my mind and, honestly, I was like ‘I can’t believe, is this over, is this it?’ ” Hendren said. “In that moment, I can either stay in my head or choose to be external about it. That’s one thing that Heather really teaches us to do, to be external when times get hard like that and things get down to the wire like that.”

The rest of UNM’s athletic department has picked up on the energy. With crowds slowly starting to grow as the season wears on, the bulk of the noise from the stands came from fellow student-athletes. Players from several different teams have made regular appearances at home games, including a grassroots effort led by UNM’s football and women’s basketball teams.

“I don’t think we win that game [against San Diego State] without the support of all the other teams,” Dyche said. “It was that extra edge that pushed us over. It started from women’s basketball. By the end of football season you felt this buzz because they were playing with this passion and I would give a ton of credit to Danny [Gonzales] for that because he’s done everything to support us all the time. When we have everybody in this together it becomes a collective effort.”

The effort extends to the Lobos’ homegrown roster. A dozen players are from New Mexico high schools, a nod to Dyche’s commitment to keep the state’s best talent at home.

Herself a local product, Dyche was a dual-sport star at Eldorado in the late ’90s. She was a four-year starter on the Eagles’ soccer team and an all-state guard for hall of fame basketball coach Mike Flanagan. She was originally recruited to Nebraska, playing both sports her freshman year.

She sought to transfer prior to her sophomore year with the intent of focusing on just one sport. Her options were playing hoops for UNM since Flanagan had taken over the program, or heading to Florida State to play soccer. She chose FSU on the advice of Flanagan.

“Honestly, the only reason I even considered basketball was coach Flanagan,” Dyche said. “To me, he’s the best coach I’ve ever played for, no doubt. He’s had a huge influence on my life, and even though I’m a soccer girl at heart, I would have given it up to play for him.”

Dyche eventually became a team captain at Florida State, leading the Seminoles to the NCAA Tournament her junior and senior seasons. She went on to play professionally overseas and here in the United States, turning her playing days into a coaching career.

In six years with the Lobos she’s 65-38-10 with a pair of first-place finishes in the Mountain West where she has won 42 of the 66 matches she’s coached.

“I’m a prideful New Mexican,” Dyche said. “Anyone that knows me will tell you that. I don’t take lightly that I get to wear it on my chest. I think when you represent the state, it represents hard work, blue collar, it’s people that have a strong sense of community and culture. When we get a chance to go represent that on a national stage I think you’re going to see us play with that kind of heart.”

And, maybe, cap it off with a celebratory hug that would make Jimmy V proud.

Correction: This story has been amended to reflect the following correction. A previous version of this story incorrectly stated the days of the Lobos' NCAA Tournament game against Navy and the subsequent game against TCU. The Lobos will play Navy on Tuesday in North Carolina. The winner of that game will play TCU on Friday.

Thank you for correcting the date.

The game is on Tuesday!