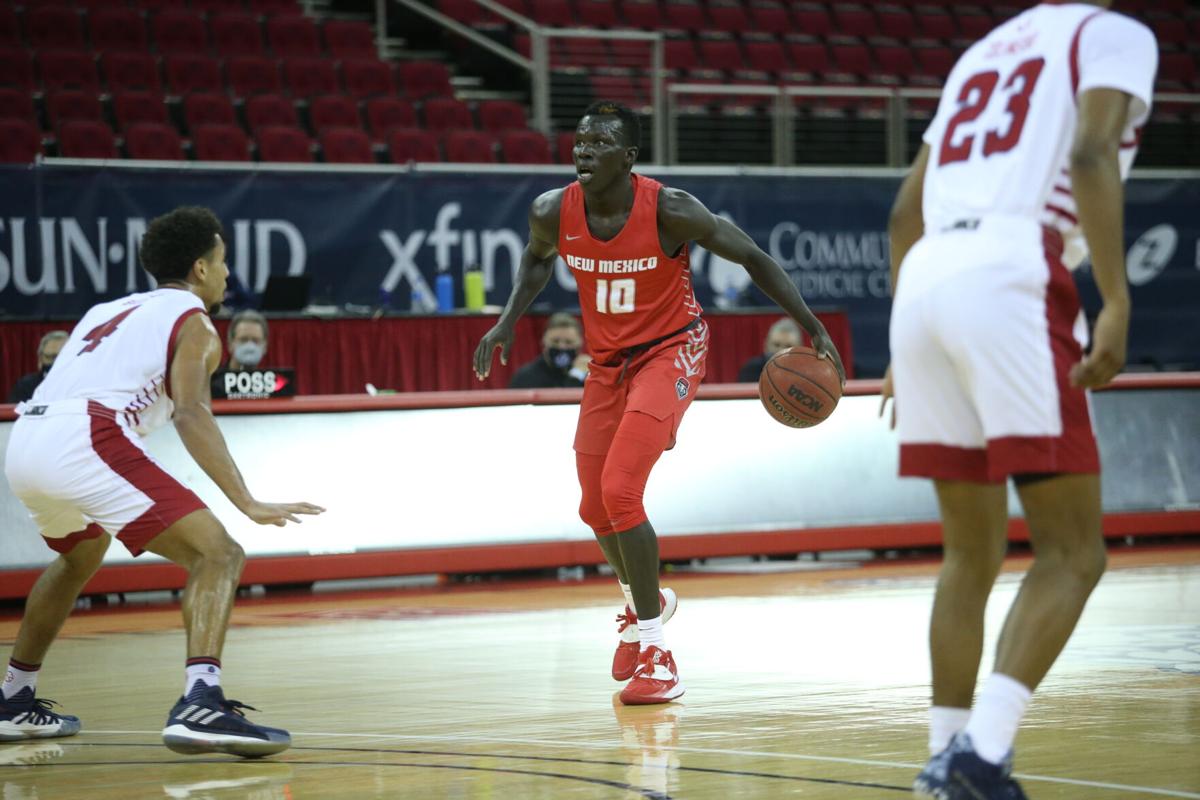 Guard Makuach Maluach, shown here in a recent game at Fresno State, is the lone remaining senior on this year’s Lobos basketball team. UNM was forced to call off this week’s games against San Diego State after the team’s active roster dropped to five scholarship players. 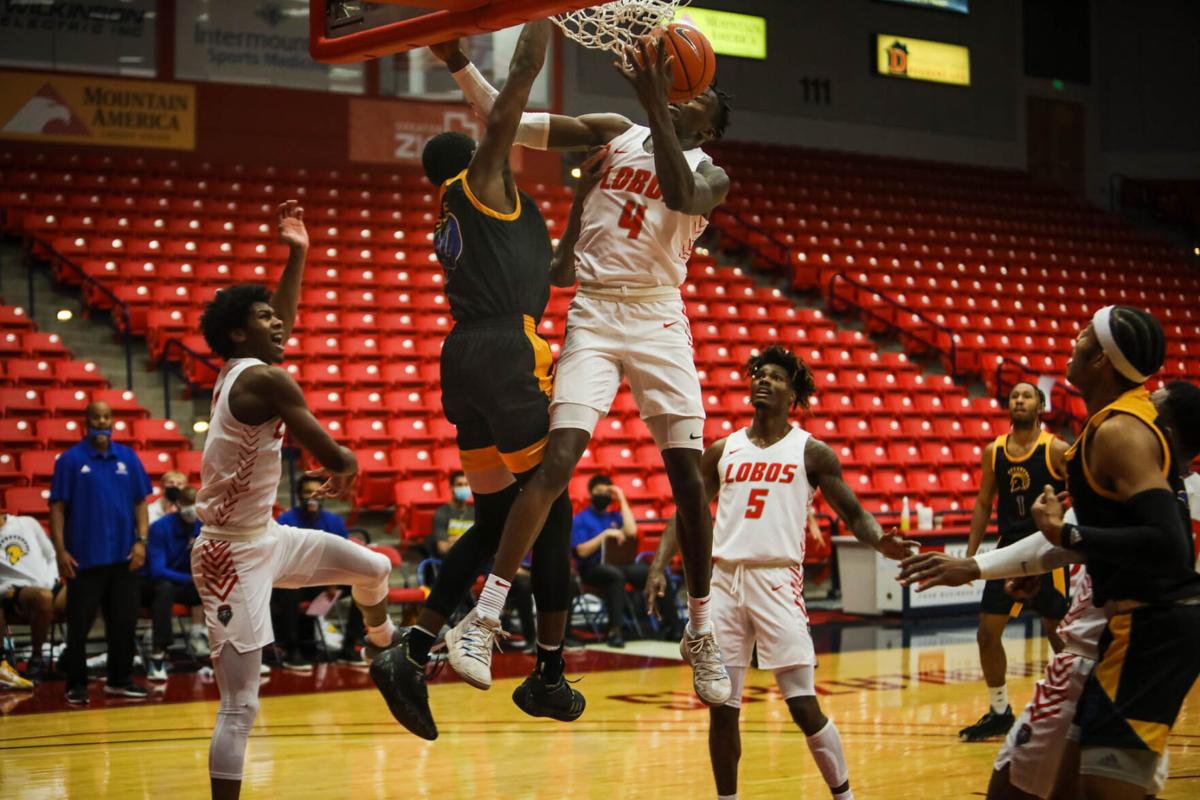 UNM sophomore Emmanuel Kuac, center, was one of the eight available scholarship players after the team’s recent road trip to Fresno State. By Monday, that number dropped to five, forcing the Lobos to cancel this week’s games against San Diego State, scheduled for Wednesday and Friday in Lubbock, Texas.

Guard Makuach Maluach, shown here in a recent game at Fresno State, is the lone remaining senior on this year’s Lobos basketball team. UNM was forced to call off this week’s games against San Diego State after the team’s active roster dropped to five scholarship players.

UNM sophomore Emmanuel Kuac, center, was one of the eight available scholarship players after the team’s recent road trip to Fresno State. By Monday, that number dropped to five, forcing the Lobos to cancel this week’s games against San Diego State, scheduled for Wednesday and Friday in Lubbock, Texas.

The University of New Mexico’s men’s basketball season will go on, but this week’s games against conference rival San Diego State are most definitely off.

UNM and the Mountain West Conference waited until Wednesday afternoon to confirm reports that the Lobos’ two-game series against the Aztecs, scheduled for Wednesday and Friday nights in Lubbock, Texas, had been called off after New Mexico’s roster had dropped to just five available scholarship players. The official announcement came hours before the teams were to tip off.

Neither team made the trip to the Panhandle. SDSU canceled a charter flight Tuesday, while UNM’s planned bus trip was called off Monday.

While the conference and San Diego State said both games had been canceled and would not be made up, New Mexico coach Paul Weir holds out hope they could be made up before the start of the Mountain West Conference Tournament on March 10.

During an hourlong video conference call with local media Wednesday, Weir shot down rumors the Lobos were ready to opt out of what’s left of the 2020-21 season.

“I knew when this journey began that the decisions I make and the way we behaved and the way this went down would reverberate for many, many years and impact a lot of people other than ourselves,” he said. “This was not a zero-sum game. Our actions were going to impact not only our program but many others here at UNM, a lot of college and high school athletes in and around our state. This was a tremendous responsibility to me.”

Weir said the team has every intention of playing its upcoming series against Colorado State, Wyoming and Air Force, all of which must be played outside state lines due to New Mexico’s public health guidelines that prohibit live sporting events from taking place during the coronavirus pandemic.

Weir and his staff informed UNM officials Monday that his active roster had dwindled to five scholarship players. The team had eight at the end of last weekend’s trip to Fresno State, where the Lobos lost both games to solidify their standing in last place in the MWC. At 5-11 overall and 1-11 in league play, they are on pace for the program’s worst season in more than 60 years.

Mountain West regulations mandate that teams have a minimum of seven scholarship players for games. After the Lobos returned to Albuquerque on Sunday, four players approached the coaching staff at the team facility the next morning to voice their concerns about moving forward.

Weir said only one of them spoke to him directly while the others talked to assistant coaches. Those concerns ranged from nagging injuries and academics to mental health and fatigue.

After updating UNM athletic director Eddie Nuñez of the situation Monday, Weir convened a team meeting Tuesday to tell the players the San Diego State series was off. He gave them what he called a “mental day off” on Wednesday in the hopes of offering enough down time to allow the players to regain their mental focus.

The Lobos have been living a nomadic existence since late November. Forced out of state in order to salvage the season, the team has spent time in the Panhandle towns of Lubbock and Levelland, as well as Houston and extended stops in Idaho, Nevada and Utah before finally getting the go-ahead from the state Jan. 19 to hold practices at home.

By then, Weir said, the damage had been done. He said the turning point was Dec. 26 when the Lobos returned to Albuquerque after a month on the road ended with a pair of blowout losses at Boise State in the days leading into Christmas. The team was home for less than 48 hours before heading back to Texas.

“For me to say, ‘Hey, we’re all getting back on the bus for Lubbock,’ on the 26th was probably our first real moment of guys outwardly voicing, you know, the things that are getting voiced to the public now,” Weir said.

The team has had dozens of internal dialogues about the mental and emotional strain of living in a COVID-19 bubble without the comforts of home. It finally reached a boiling point Monday when Weir said some of those players voiced their frustrations with third parties outside the team’s inner circle.

It was those moments of venting that led to speculation that the Lobos were opting out for the remainder of the regular season.

“I think maybe just some kids got together and vented a little bit and it got, you know, communicated and communicated and, eventually in translation, it turns into our team is opting out,” Weir said. “And we laughed. I said, ‘Guys, people think we’re opting out,’ and there was some laughter in the room.”

Weir said the team has never discussed the idea of opting out, a move that would make them the first team in Mountain West history to not finish a regular season.

On the court, UNM’s performance has been abysmal. The Lobos have been held under 60 points in half their games and they’ve lost nine of their 12 conference games by double digits. Weir has pointed to the team’s sloppy play and poor shooting and a lack of practice and preparation, saying not having access to facilities has had a big impact on the team’s play.

What’s more, he said he has remained vigilant of the players’ mental and emotional needs, insisting he has never forced anyone to keep playing after they expressed their concerns to him or anyone on the staff.

Looking back, he said he would have been more forceful in asking UNM and Mountain West officials for built-in breaks for his team. Instead, the Lobos have pushed through, playing every game without any positive cases of COVID-19 among his players or staff.

He also said he hopes the long-term effect on his players will be a positive one. The political, social and health unrest from the past year, coupled with the challenges the Lobos have faced by playing in adverse conditions on the road, will hopefully make the players better men.

“I hold my head high and put my head on the pillow feeling as though whatever questions [the media] is about to come up with, I accepted those,” Weir said.