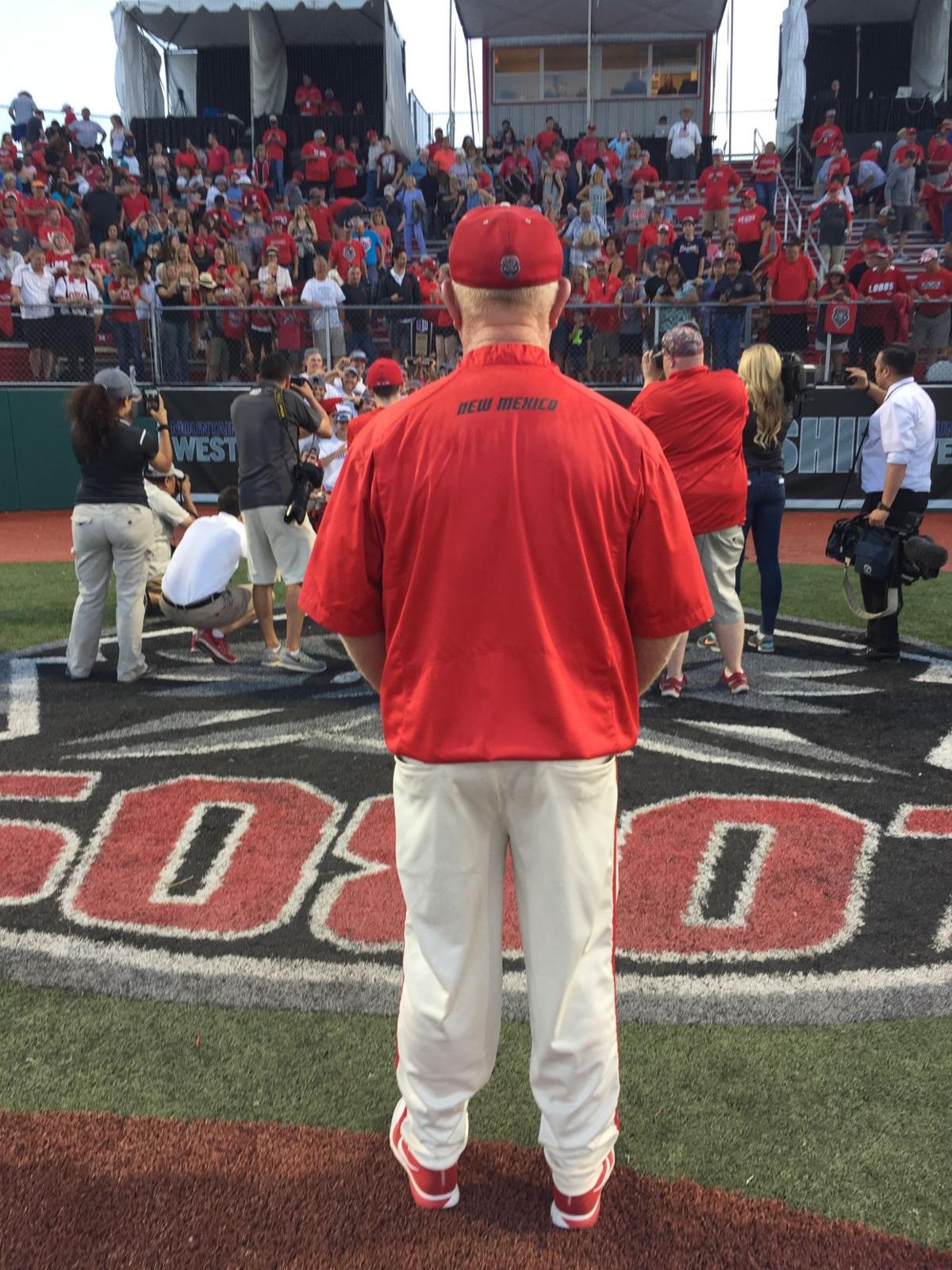 UNM head baseball coach Ray Birmingham looks on as his team poses with its fans after winning the Mountain West Conference Tournament championship in 2016. After surviving UNM’s 2017 budget crisis, the team has been slowly rebuilding itself. 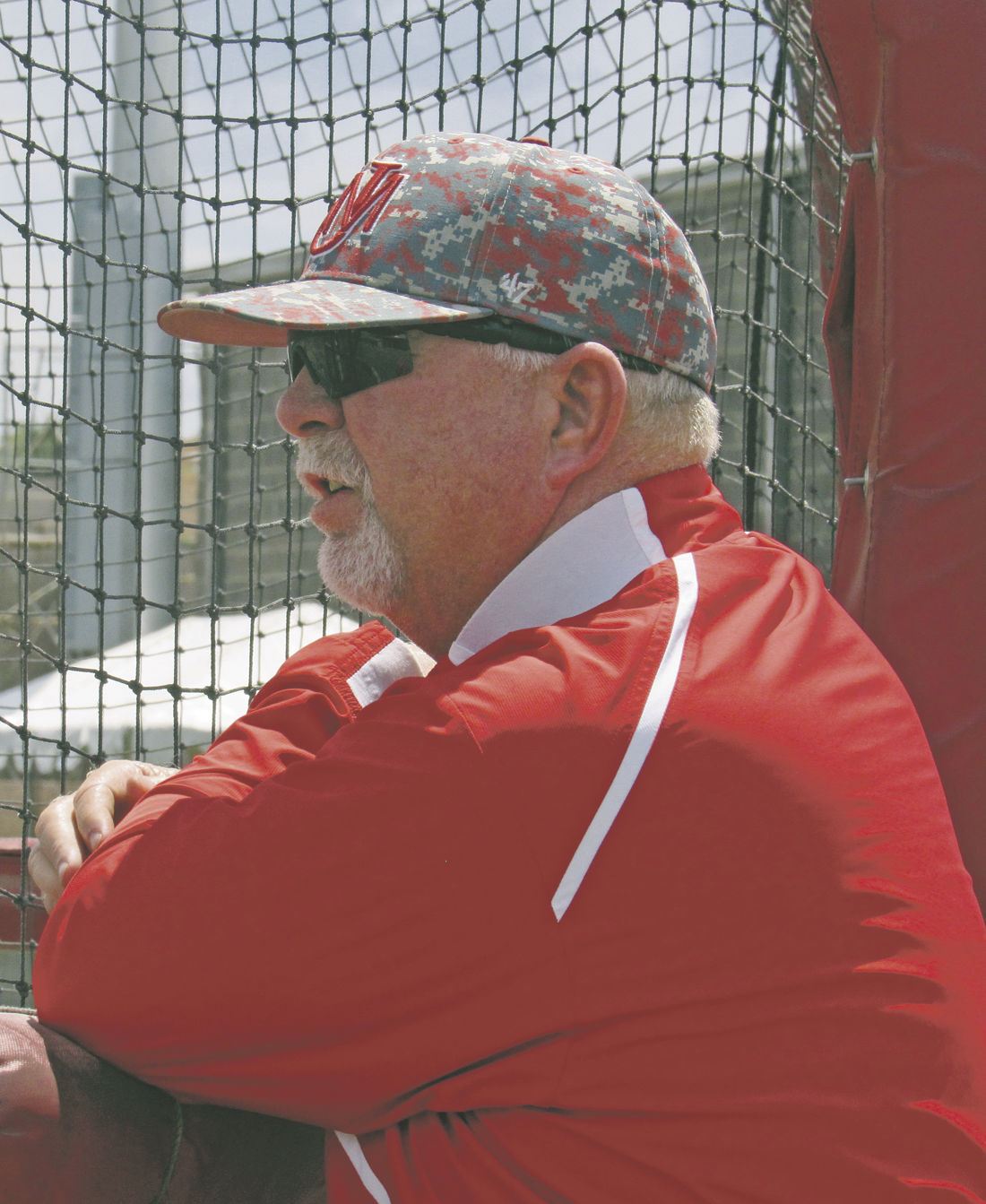 Lobos coach Ray Birmingham said UNM’s starting pitchers must be up to the challenge in the Lubbock Regional. Will Webber/The New Mexican

UNM head baseball coach Ray Birmingham looks on as his team poses with its fans after winning the Mountain West Conference Tournament championship in 2016. After surviving UNM’s 2017 budget crisis, the team has been slowly rebuilding itself.

Lobos coach Ray Birmingham said UNM’s starting pitchers must be up to the challenge in the Lubbock Regional. Will Webber/The New Mexican

ALBUQUERQUE — Take a gander around the longtime home of the University of New Mexico’s baseball program and the wish list for the state’s marquee college program gets pretty long pretty fast.

Santa Ana Star Field’s turf could use a fresh rug in the infield, the grandstands and press box still have that new-car smell but are close to getting a huge facelift, and the outfield wall is starting to show the wear and tear of hundreds of baseballs (and bodies, no doubt) smacking into it.

One of the smaller improvements on the way is something you’ll only see if you’re paying particularly close attention when driving into the parking lot. The school will soon have a table-sized boulder plopped into the ground somewhere near the main entrance to the Hubbard Clubhouse down the right field line to signify something head coach Ray Birmingham has been preaching for years.

He’s referring to athletic department’s budget crisis of 2017 when the baseball program was rumored be on the chopping block in an attempt to make ends meet. The department was hemorrhaging cash and something had to go, namely one big team sport on the men’s side. The prime candidates were baseball and men’s soccer.

Soccer wound up getting axed, but the damage was done. It has taken years to for the team to recover. The signs of rebirth are starting to materialize in the form of a strong 2020 recruiting class that ranked 33rd nationally, not to mention the seven figures in publicly allocated money that will help Star Field continue to evolve.

The rock, Birmingham said, is symbolic of the greater purpose meant to get baseball back to where it needs to be. In Birmingham’s mind, that’s one step closer to the College World Series in Omaha, Neb.

“Now we’re back to where we can feel everybody pushing the rock together, not one guy being more important than the next guy,” Birmingham said. “And that’s how we win.”

The Lobos open their 56-game schedule Friday afternoon in Surprise, Ariz., against Oregon State. It’s the first of four games UNM will play over the weekend at the Sanderson Ford College Baseball Classic, which has them playing BYU twice on Saturday and wrapping things up with a single game against Gonzaga on Sunday.

David visits Goliath: The men’s basketball team is less than two weeks removed from one of the worst losses in the history of The Pit, getting shredded by San Diego State in a 28-point blowout on Jan. 29.

The Lobos get another shot at the still-unbeaten Aztecs on Tuesday night when they visit Viejas Arena in a nationally televised 8 p.m. tipoff on ESPN2. Still shorthanded, the Lobos are at least a stronger team than the version that ran onto the floor in the last meeting.

Back are guards Vance Jackson and JaQuan Lyle, a pair of players who have averaged approximately 27 points and nine rebounds between them. Neither played in last last SDSU encounter.

The Lobos (17-8, 6-6 MWC) are in seventh place in a crowded conference race, trailing second-place Colorado State by just two games. San Diego State (24-0, 13-0) can clinch at least a share of the league title with a win and a CSU loss at home Tuesday night against Utah State.

Highly unlikely: Don’t hold your breath hoping to see Baby Shaq in cherry and silver. Shareef O’Neal, son of NBA legend Shaquille O’Neal, announce Jan. 22 that he will transfer from UCLA. He posted a long message to his Twitter account and specifically thanked former Bruins head coach (and Lobos front man) Steve Alford for recruiting him to Westwood in the first place.

A source within the UNM athletic department said current Lobos head coach Paul Weir asked athletic director Eddie Nuñez, who has Shaq Daddy on speed dial since the two have mutual roots at LSU, to drop the old man a line when Shareef announced he was entering the portal.

Weir was told that Shaq’s response was something like this: The kid can make up his own mind without direction from his parents. He could put in a good word but ultimately that decision is Shareef’s and nothing but Shareef’s.

A 6-foot-9 forward, the younger O’Neal redshirted his true freshman year at UCLA after being diagnosed with a right anomalous coronary artery. He underwent open-heart surgery to correct the issue and was cleared to return to last March. He played in just 13 games for the Bruins this season, averaging 2.2 points in 10.2 minutes per game.