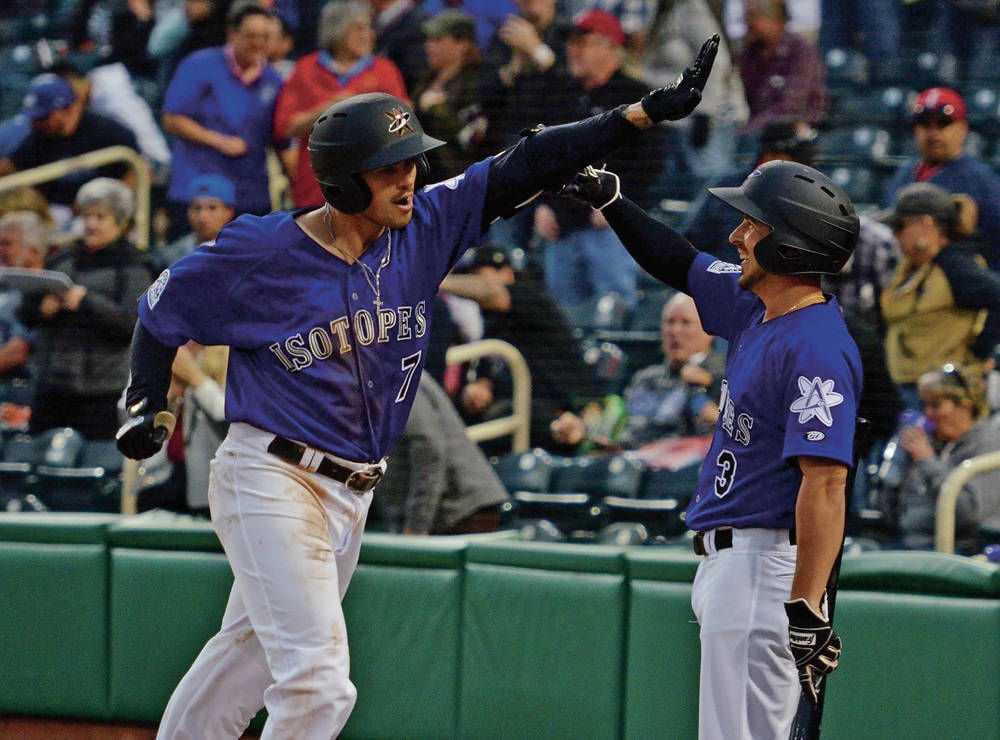 Isotopes third baseman Josh Fuentes, left, gets a high-five from Elliot Soto after hitting a solo home run in the second inning of the Isotopes' 2019 season opener against the Salt Lake Bees at Isotopes Park. 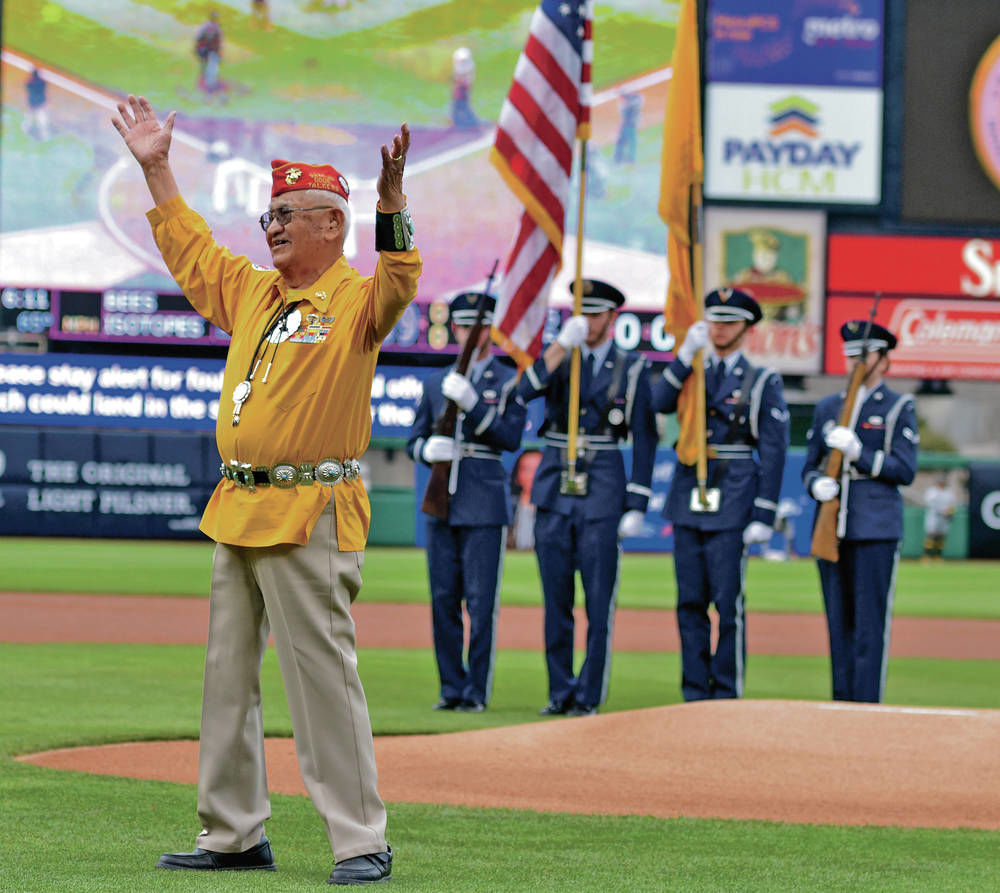 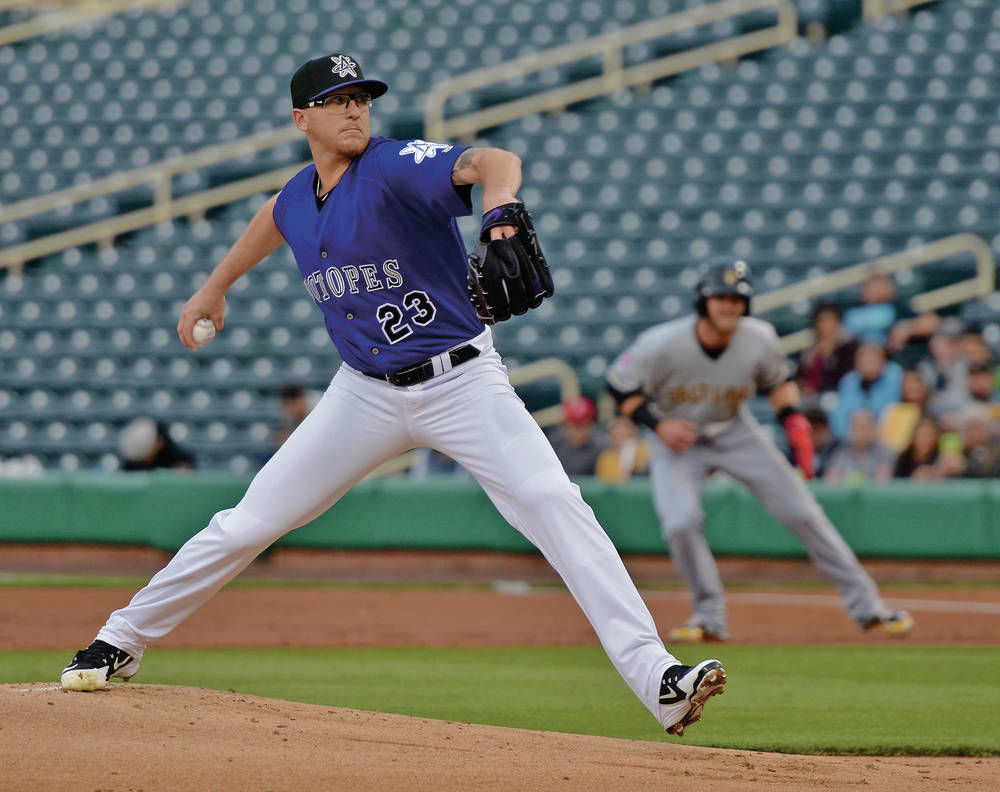 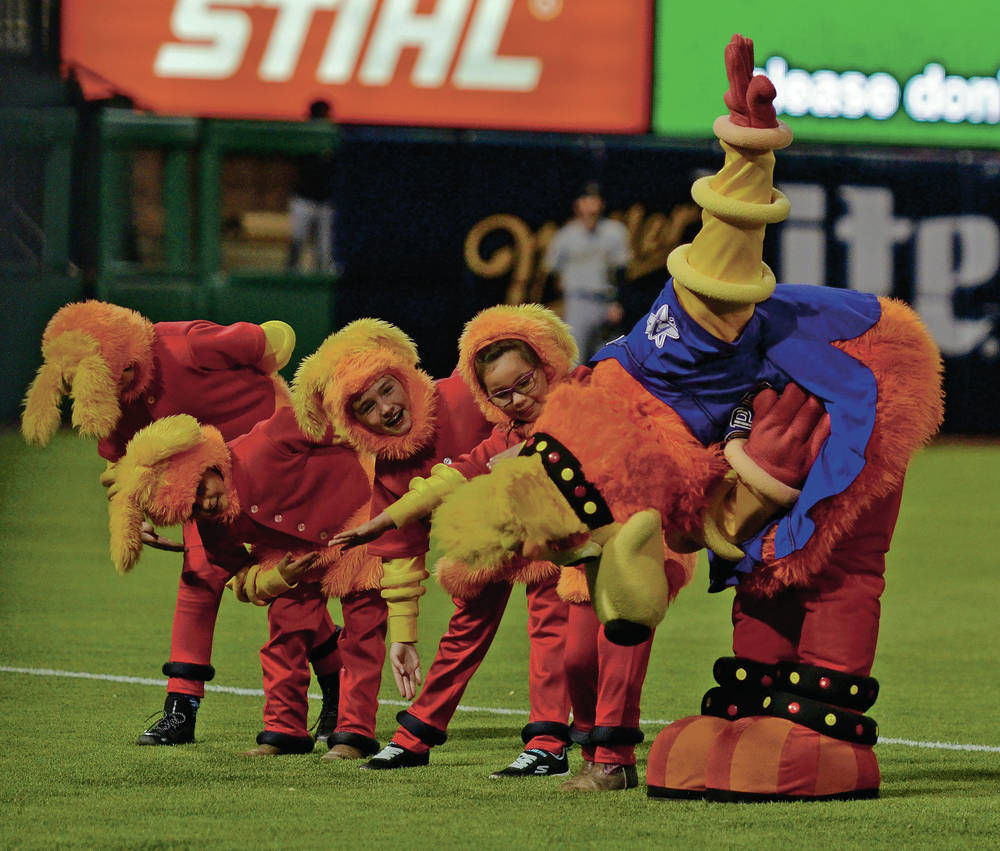 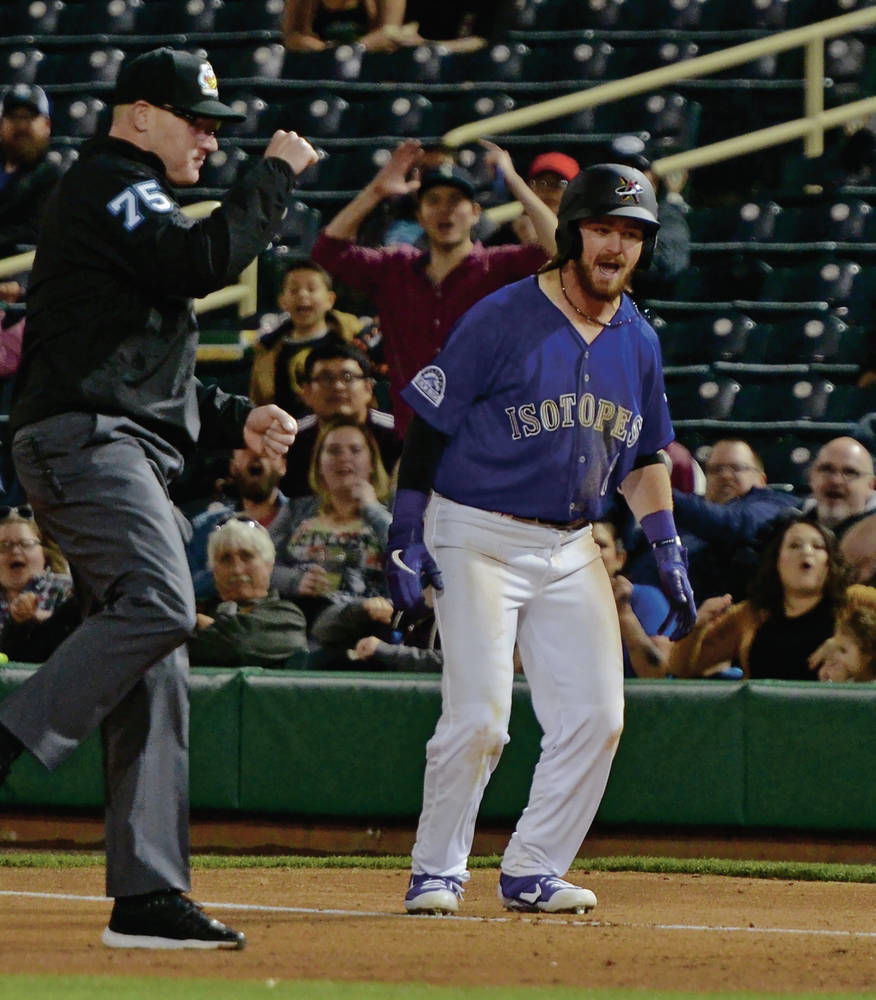 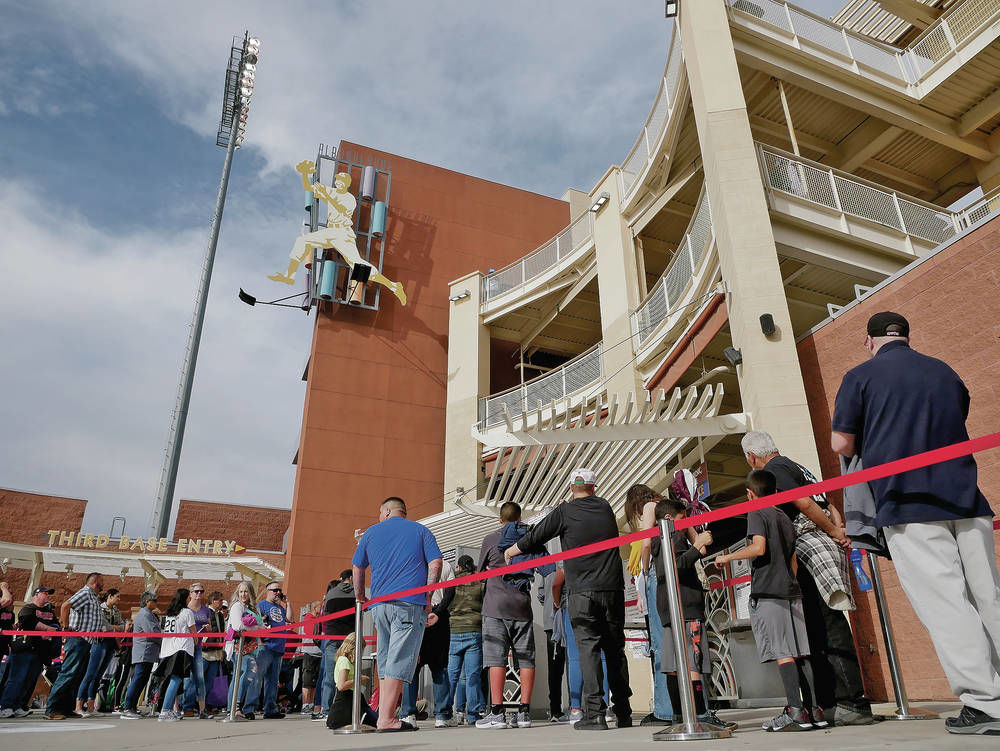 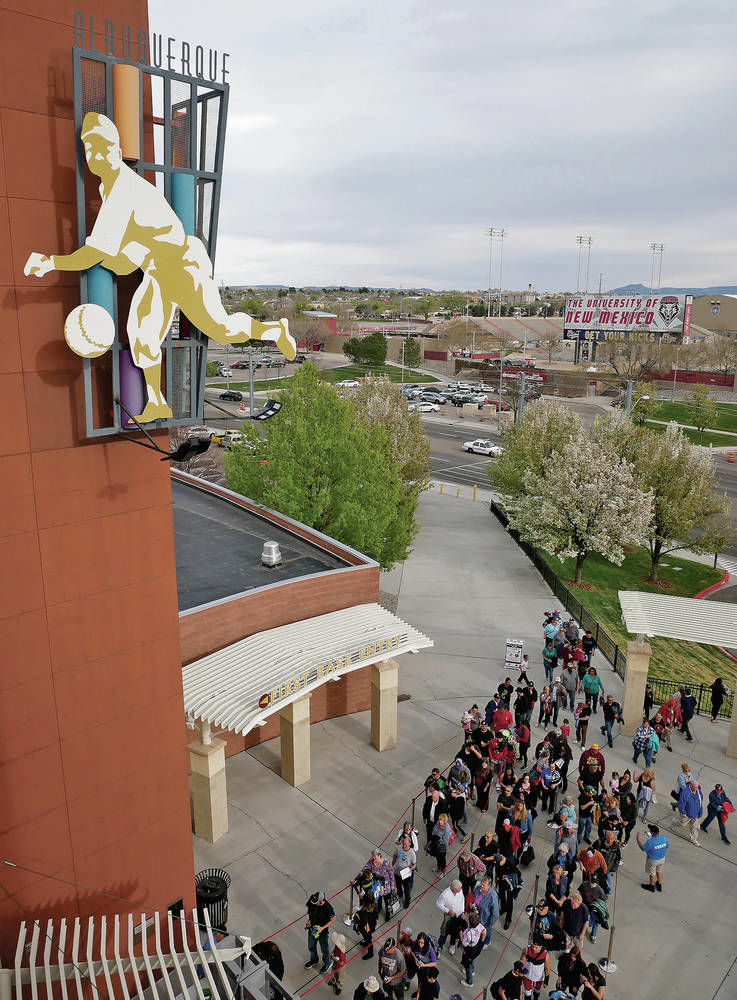 Isotopes third baseman Josh Fuentes, left, gets a high-five from Elliot Soto after hitting a solo home run in the second inning of the Isotopes' 2019 season opener against the Salt Lake Bees at Isotopes Park.

ALBUQUERQUE — Root, root, root for the home team, if they don’t win it’s a shame.

Then again, it doesn’t really matter at Isotopes Park.

The Triple-A home of the Colorado Rockies’ top affiliate (and before that the Marlins’ and then the Dodgers’) opened its gates for the 17th season of professional baseball Thursday night.

Before the game was all the usual opening night pomp and circumstance. There was the ceremonial check the team gave to the city, this one for a tidy sum of $1.46 million.

Then there was the mayor and his first pitch, the owner and his thankful speech, the players from each team lining up for pregame introductions.

All things considered, just another season for New Mexico’s destination spot for America’s pastime. Over the years, the old ballyard has changed quite a bit, from moving the bullpens away from the foul lines to the batter’s eye that started off as a series of knee-high shrubs that’s now a miniature forest of full grown trees.

Outside the park, there’s the refurbished Pit to the south and the addition of several buildings on the CNM campus to the north.

Through it all has been the one constant: No one seems to mind if the Isotopes win or lose. The home team lost Thursday, just another small footnote in a stretch of five straight losing seasons and slowly sinking attendance in what is now the fifth year of the Rockies affiliation. The Isotopes were rocked for 17 hits and double-digit runs in an 11-4 loss to visiting Salt Lake before just 6,187 fans on opening night.

Isotopes manager Glenallen Hill’s message? Relax. It takes time to settle into a season and every year is unique in its own way.

“Each team is different,” he said, referencing the Isotopes’ exhibition game against Colorado last week. “It is early in the season and we had an interesting game with the exhibition here. And we played these guys a lot in spring training. It’s early.”

As always, the lists of firsts in the opener came fast and furious.

First pitch: 6:38 p.m with a game-time temperature of 65 degrees, 10 degrees below the franchise record for an opener.

First foul ball: Two minutes later when a popup cleared the protective netting just outside the Isotopes dugout and landed in the second row, drawing a chorus of ooohs and ahhhs.

First appearance by Orbit: 6:49 p.m. when the mascot circled the warning track in a plumber’s truck and later danced to Baby Shark with a bunch of mini-Orbits.

First dinger: 7:17 by Albuquerque’s Josh Fuentes who, by the way, had the first ball hit to the berm in deep center when he lined a double over Brandon Lund’s head exactly 45 minutes later.

When it was all said and done, another loss for a team that is now 59 games under .500 since the start of the 2014 season and 41 games south of the break-even point since joining Colorado’s farm system.

“It’s early and my motto is, you know, when the day’s over, wash it off and get ready for a new day,” Hill said.

The good news? There are 69 home games left and another 139 in the regular season.

There are plenty of chances for things to turn themselves around.

Not that it matters.

The Isotopes and Bees will play four more times in what is an unusual five-game series to start the Pacific Coast League season. Saturday’s game is the first Mariachis promotional night where the Isotopes will wear the gimmick uniforms that were a huge hit last season. … Albuquerque is now 11-6 in season openers dating to that first season in 2003. The Topes are 13-4 in home openers. … The walls of the Isotopes Park press box are covered in framed sheets of baseball cards from several of the past teams, including the 2003 squad that was the first in team history. Among the faces is a youthful Adrian Gonzalez, a five-time All-Star in the big leagues. … Hill’s desk inside the Isotopes’ clubhouse had two books on it. One was a pocket-sized New Testament. The other was “Ego is My Enemy” by Ryan Holiday.