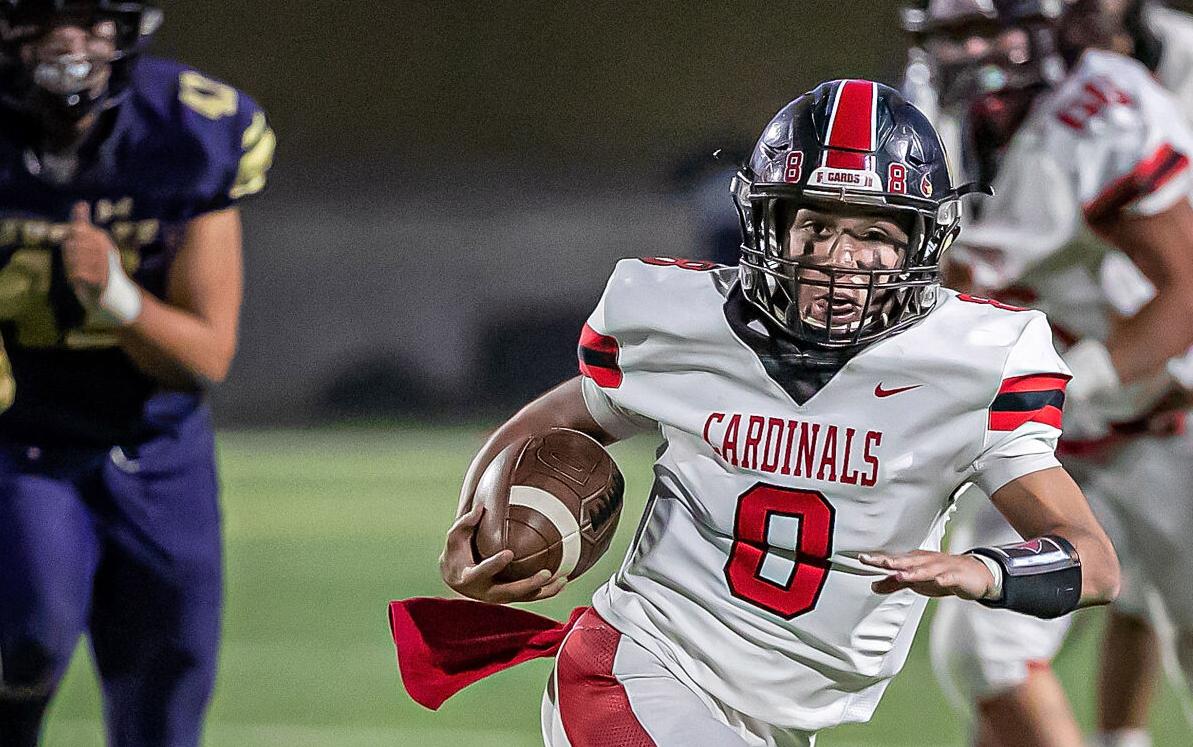 Defenses have mostly struggled at slowing down the 5-foot-6 Cardinals quarterback Matthew Gonzales who averages 209.9 yards of total offense (passing, rushing and receiving) and is the Cardinals’ leading rusher with 1,058 yards. 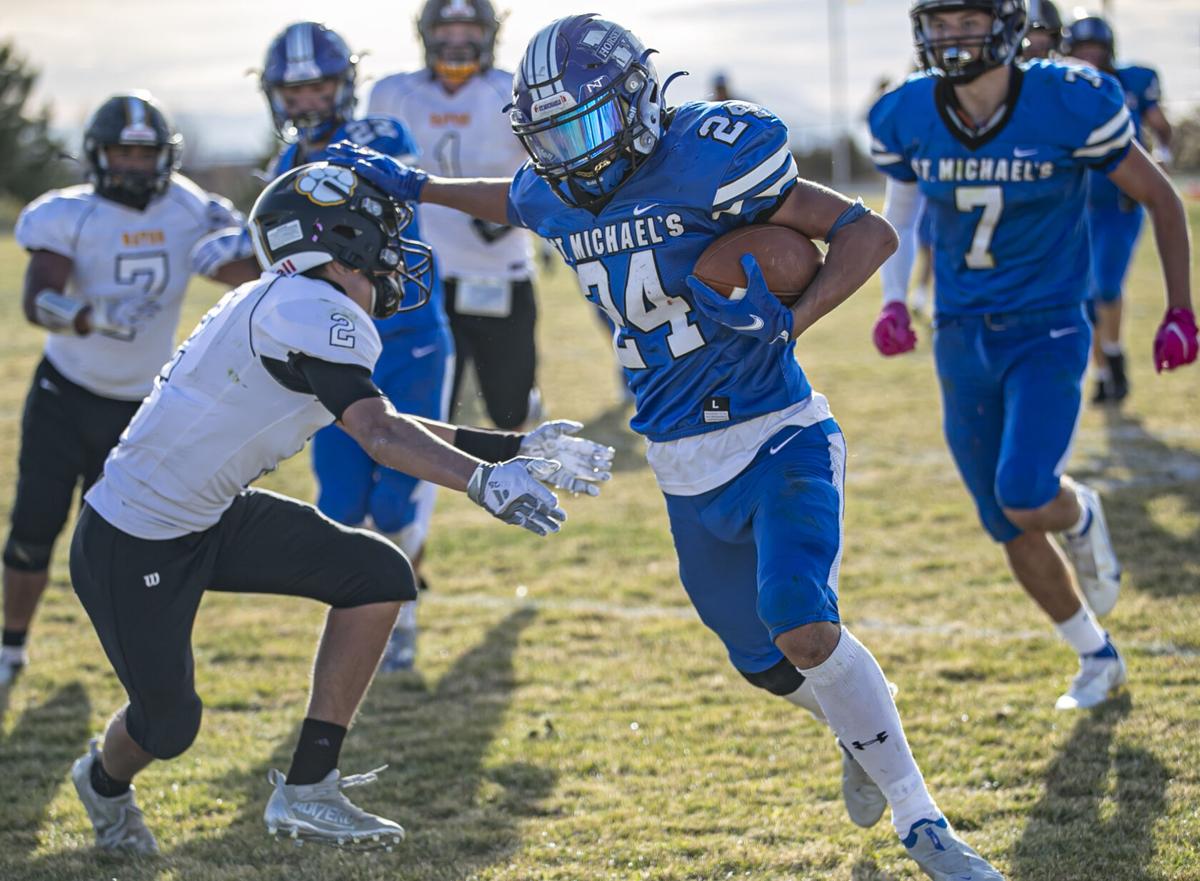 Horsemen running back Daymon Lujan breaks a tackle Saturday against Raton in a state semifinal. Lujan ran for 71 yards on 19 carries against Raton and help run the clock down in the 7-0 win. 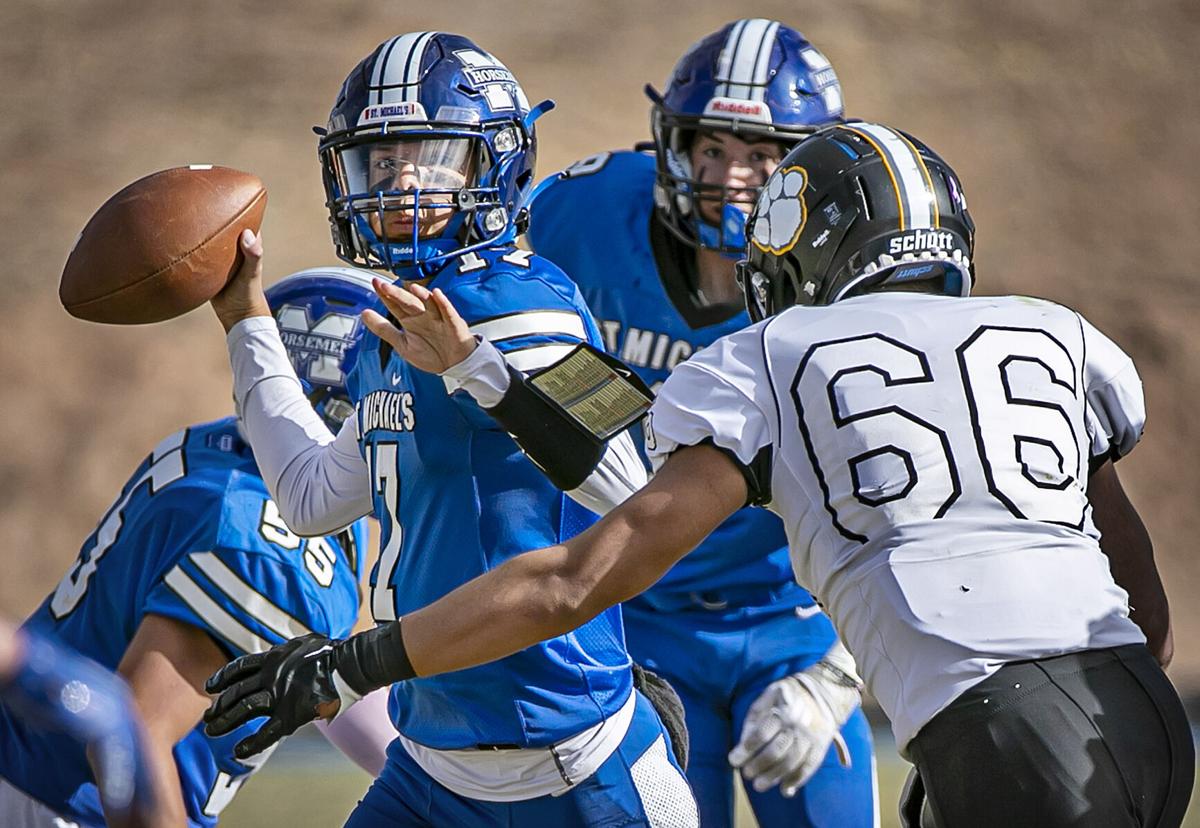 Defenses have mostly struggled at slowing down the 5-foot-6 Cardinals quarterback Matthew Gonzales who averages 209.9 yards of total offense (passing, rushing and receiving) and is the Cardinals’ leading rusher with 1,058 yards.

Horsemen running back Daymon Lujan breaks a tackle Saturday against Raton in a state semifinal. Lujan ran for 71 yards on 19 carries against Raton and help run the clock down in the 7-0 win.

Matthew Gonzales versus the Horsemen defense.

The battle of run games trying to control the line of scrimmage.

And, of course, two teams with big receivers.

Those elements will be crucial to the outcome of any Las Vegas Robertson-St. Michael’s football game. They are the storylines that will determine the winner between the two teams at Cardinal Field. The difference is the victor between the two District 2-3A stalwarts gets to hoist the Class 3A state trophy at the conclusion of the game.

The fourth-seeded Horsemen head to Las Vegas, N.M., to take on the No. 3 Cardinals at Cardinal Field in the 3A title game at 1 p.m. Saturday.

The New Mexican reached out to two head coaches who played both teams this season — Santa Fe High’s Andrew Martinez and West Las Vegas’ Adrian Gonzales — to breakdown the elements to the game. They also have unique connections to both programs.

They agreed the biggest challenge will be how St. Michael’s defends against Robertson’s do-everything senior quarterback Matthew Gonzales. Defenses have mostly struggled at slowing down the 5-foot-6 signal-caller, who averages 209.9 yards of total offense (passing, rushing and receiving) and is the Cardinals’ leading rusher with 1,058 yards.

Not only does his dual threat create headaches, coach Gonzales said what makes the quarterback so difficult to prepare for is his unerring instinct that can turn a hopeless situation into something positive.

“That’s the X-factor he brings with him,” Adrian Gonzales said. “So, when you gotta tackle him, I mean you better. It’s like what we told our kids: ‘Hold on for dear life and wait for the cavalry to come and help.’ ”

Even though the Dons lost to Robertson in the 3A quarterfinals, coach Gonzales felt like his defense did a very good job limiting Matthew Gonzales’ impact. He had just

55 rushing yards and another 104 through the air, but he did score three touchdowns in the 27-6 win.

Martinez said he suspects the Horsemen will play plenty of zone defense with defenders keeping their eyes on the pocket to help limit Gonzales’ gains when he runs. However, he is equally capable of sucking in defenders and dumping the ball off to open receivers.

“He’s going to get his rushing yards, and you know it,” Martinez said. “It’s just about trying to limit those real big, game-breaking plays.”

Perhaps the best way to counter Gonzales’ offensive skillset is to keep him on defense, where he plays safety. Martinez and Gonzales said St. Michael’s will lean heavily on its rushing attack, which is averaging 154 yards per game, to shorten the game and lengthen the time Robertson’s defense stays on the field. The Horsemen only managed 43 yards on the ground in a 7-0 win over Raton, but they lost 27 yards on five sacks.

Daymon Lujan ran for 71 yards on 19 carries against the Tigers to lead the way for St. Michael’s, and he was essential in helping peel time off the game clock to ensure the win. He had a career-high 162 yards in a 34-14 win over New Mexico Military Institute in the quarterfinals and will be a key part of the Horsemen attack.

Martinez said St. Michael’s has used a short passing attack — mainly screens and quick out routes — to take some pressure off of junior quarterback Zach Martinez, who has been sacked 17 times in seven games. All of that will be crucial in shortening the game and keeping the ball out of Gonzales’ hands.

“Last week, that was a really short game — incredibly short,” Martinez said of the St. Michael’s-Raton affair. “And I think you’ll see a lot of that this week. They’re gonna try and control the clock.”

Adrian Gonzales said while both teams will have some wrinkles in their game plans, don’t expect drastic changes that deviate from what they’ve established during the season. So, expect both teams to run the ball plenty in the hopes of sucking in defenses to set up some big-play opportunities.

That will bring a pair of big targets into play: receivers Devin Flores (St. Michael’s) and Mateo Contreras (Robertson).

Both players are over 6-feet tall and combined for four touchdown catches last week, with Flores’ grab being the only score in the game.

But both also play in the secondary, which could mean the two will line up against each other at times.

“I almost think that it kinda negates itself in some ways,” coach Gonzales said. “But when you have that big body that can track balls, there’s a lot of things you can do. Ultimately, you can just put the ball in their vicinity and trust your guy is going to jump and go get it.”

Ultimately, it will come down to which team controls the line of scrimmage to establish the running game.

Both coaches agreed a game with the score in the teens and 20s favors the Horsemen, but the Cardinals could roll if they are able to score 30 to 40 points.

“You know these guys are going to make some plays on both ends of the field, and they’re going to be competitive about it,” Martinez said. “I think what they’ll have to do is control their emotions, too, to not have a dumb penalty. You don’t want it to come down to a big play, then it gets taken away because of an unsportsmanlike penalty.”

Tickets: Adults — $10; students/seniors/military — $5. All ticket sales are online only, and can be purchased at https://gofan.co/app/school/NMAA. There will be no walk-up sales.

The coaches are both exactly right. The Horsemen are going to have to drive their shoulder pads and helmets into this guy and take him down hard on EVERY play. If they try to grab or arm tackle him, which has been their tendency at times, It is going to be a long afternoon. The Horsemen HAVE to control the line of scrimmage on both sides of the ball.This is an absolute must if they want any chance of winning this ball game. they have to beat Robertson at their own game, which is playing physical hard nose football. And finally they MUST protect the QB. The QB is going to have to make plays with his arm to keep Robertson from loading the box. He can't do it if he is hurrying his throws or laying flat on his back.