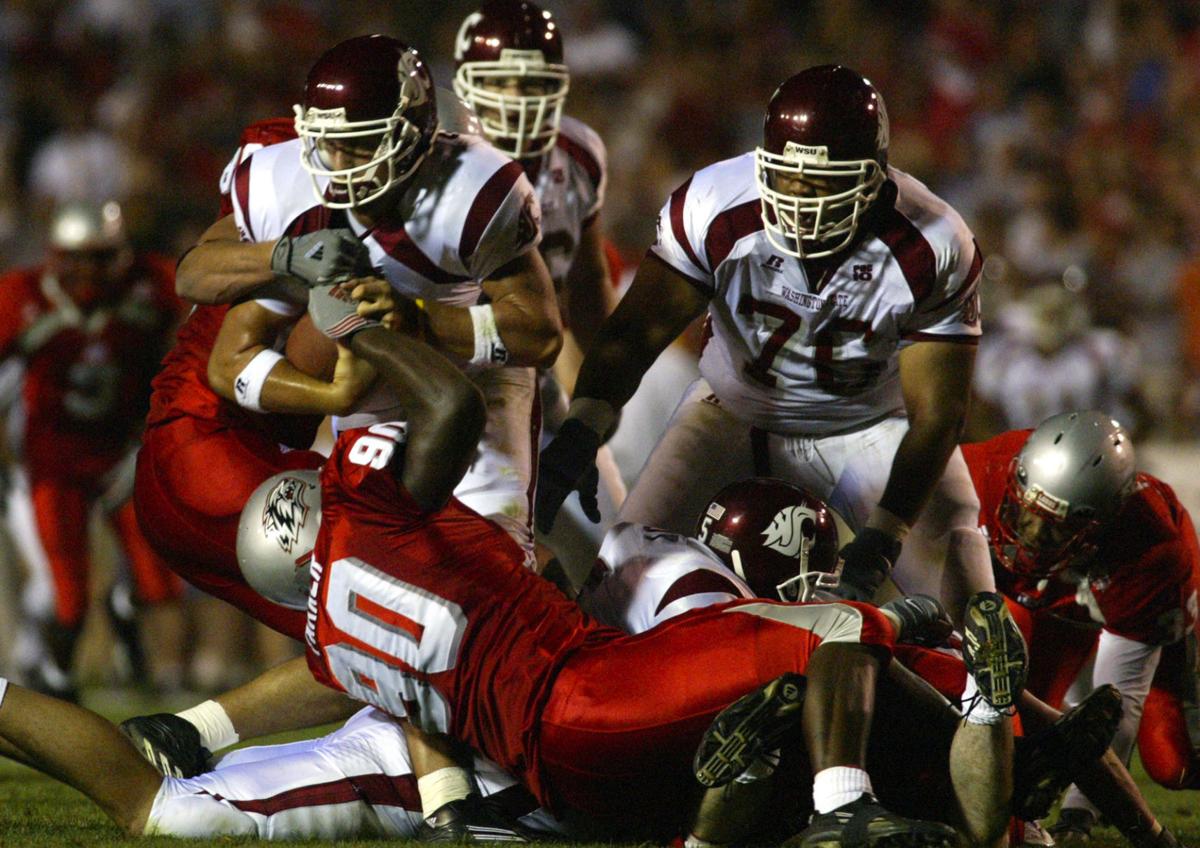 Gonzales’ plan in rebuilding the moribund program involves uncovering local players who can be big contributors, like Nick Speegle, left, shown attempting to sack the Washington State quarterback in 2004. 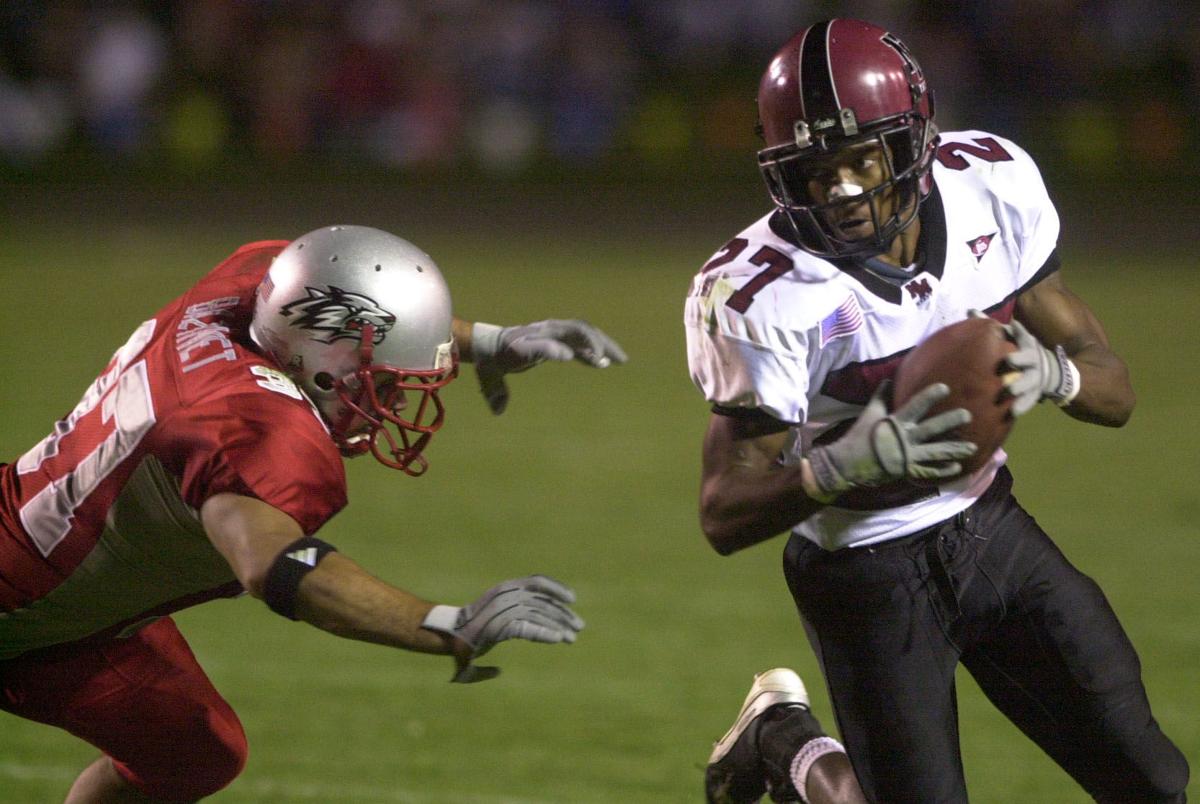 Former University of New Mexico player Josh Bazinet, left, an Albuquerque West Mesa graduate, was an example of unheralded players UNM head coach Danny Gonzales helped find when he was an assistant from 2002-08 under Rocky Long. Gonzales plans to follow a similar philosophy as the Lobos’ head coach — with Long as his defensive coordinator.

Gonzales’ plan in rebuilding the moribund program involves uncovering local players who can be big contributors, like Nick Speegle, left, shown attempting to sack the Washington State quarterback in 2004.

Former University of New Mexico player Josh Bazinet, left, an Albuquerque West Mesa graduate, was an example of unheralded players UNM head coach Danny Gonzales helped find when he was an assistant from 2002-08 under Rocky Long. Gonzales plans to follow a similar philosophy as the Lobos’ head coach — with Long as his defensive coordinator.

If there’s a basic tenant to the way Danny Gonzales recruits, that’s it.

“The idea is to keep New Mexico’s kids in New Mexico and turn over every rock from here to who knows where finding the guys we need,” he said. “We’re building something here, and we want guys who want to be here. That’s what we’re selling.”

Wednesday is national signing day for college football teams, where high school and junior college players send in their National Letter of Intent to play at the school of their choosing. Programs from coast to coast will dominate the TV landscape, espousing to the talking heads about the next great group of recruits who could, one day, hoist some sort of championship hardware.

UNM is no different, and Gonzales’ goal is to slowly restore a sense of pride in a program that has become a laughingstock in the past few years. On the job for just seven weeks, he and his staff have spent the vast majority of their time on the road recruiting or staying home to host prospective Lobos with on-campus visits.

The team will announce its recruiting class in a public party from 5 to 7 p.m. Wednesday at BJ’s Brewhouse in Albuquerque.

In private, Gonzales said the Lobos need help in so many areas that focusing on any one area would almost be counterintuitive. The philosophy in the first year, he said, is to get as many athletes as he can and then spend the next few years molding them into spots the team needs most.

UNM had just five verbal commitments before Gonzales was hired Dec. 17, ranking the program between 130 and 150 on various recruiting sites. As of Wednesday, up to 20 players are expected to sign NLIs, with 15 players having offered solid commitments.

True to his word, Gonzales has stuck mostly with UNM’s backyard to find the next batch of Lobos. All but one of the incoming recruits hail from what would be considered the program’s focal point stretching from the West Coast to Texas.

Every player but one on the commits list is from New Mexico, Arizona, California or Texas, the exception being offensive lineman Ben Davis, a graduate transfer from Minnesota who’s expected to make an immediate impact in the starting lineup.

There are no quarterbacks on the list and the majority of the players have experience on the defensive side of the ball — which makes sense given the mindset of Gonzales and defensive coordinator Rocky Long.

“The first two years all you want to do is just get better,” Long said. “Then, after we have a third recruiting class and it’s mostly our guys, now it’s time you ought to see more wins. But if you don’t win as many games as you did last year and you look like a whole lot better team, you’re making progress. We’re making progress.”

Gonzales is determined to win the recruiting battle in New Mexico. If he had his choice he’d build a fence around the state and post no-trespassing signs to coaches from anywhere else.

The Lobos missed out on two of the state’s top players in Connor O’Toole (La Cueva) and Dorian Lewis (Cleveland). O’Toole has already signed with Utah while Lewis, a coveted running back who helped the Storm win the 6A championship last fall, is headed to Coffeyville Community College.

Long said one of the issues with building a roster of homegrown talent is the lack of available bodies. As much as you want local players on the team, it’s not always possible.

“It’s difficult to build a team anyplace and it’s more difficult to build it here,” Long said. “Not because of New Mexico; just because of population. There’s not a lot of people that live in this state and there’s only so many Division I athletes by population. So obviously, number one, you gotta get the good players in the state to stay home and come here because the heart of your program is with in-state kids.”

Gonzales will use the walk-on approach as much as possible. The idea is twofold; to add depth to the roster and, second, give New Mexico’s top players a chance to earn a scholarship down the road.

UNM’s past is sprinkled with local players who were barely recruited by other schools and made a name for themselves as Lobos. Among them were Ryan Cook and Jarrod Baxter, two Albuquerque kids who walked on and eventually wound up in the NFL.

Among the local players expected to sign Wednesday are Bryce Santana, a defensive lineman from Los Lunas, and Hope Christian’s Ryan Cosper, a receiver. Santana and linebacker Ray Leutele from Mater Dei High School in California are the prototypical defensive players Gonzales and Long are looking for — physical, tough and focused.

They’re also high school players who need time to develop. All but two or three players expected to sign Wednesday are coming straight from the prep ranks, meaning it’s going to be a slow burn to see any measurable improvement on the field for a team that ranked last in the country in pass defense and was one of the worst offenses in the Mountain West.

Gonzales can deal with the struggle. He came here expecting nothing less. In many ways, the UNM program was left in shambles and the only way back is to get people interested in Lobo football again.

That all starts Wednesday.