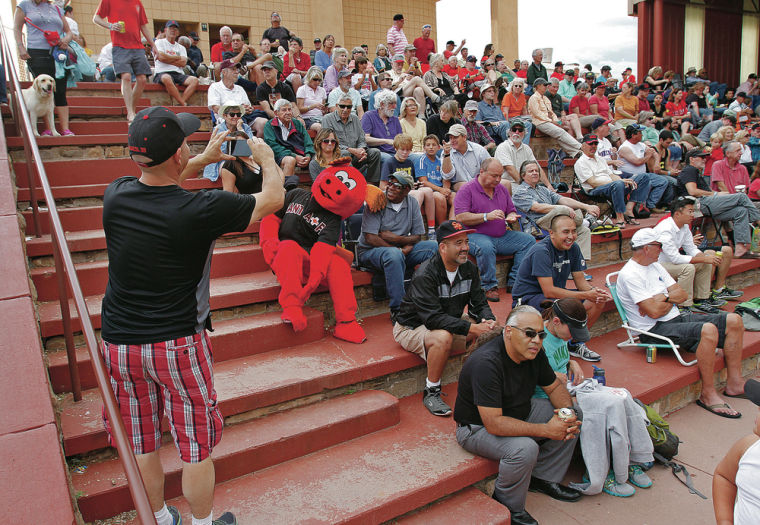 Santa Fe Fuego mascot Furry takes a photo with some of the fans who enjoyed the final game of the Pecos League Northern Division playoff series on Monday night. The Fuego routed Trinidad 22-0 to reach the league finals for the first time in team history. Jane Phillips/the New Mexican 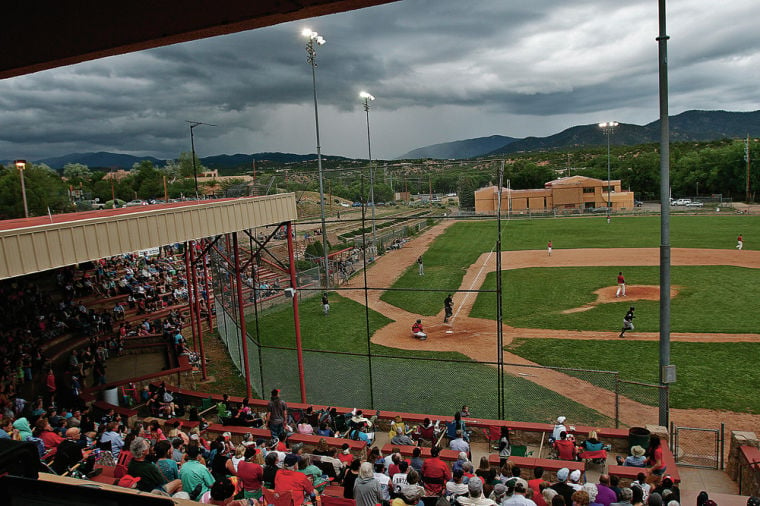 From left, Chevas Numata is congratulated by manager Bill Moore and pitcher Brandon Marris after Numata scored during the Pecos League Northern Division playoff series between Santa Fe and Trinidad at Fort Marcy Ballpark on Monday. The Fuego will face Alpine in Game 1 of the championship series on Wednesday. Jane Phillips/the New Mexican

Santa Fe Fuego mascot Furry takes a photo with some of the fans who enjoyed the final game of the Pecos League Northern Division playoff series on Monday night. The Fuego routed Trinidad 22-0 to reach the league finals for the first time in team history. Jane Phillips/the New Mexican

There are a few schools of thought when it comes to nixing the Santa Fe Fuego’s ongoing headache in its one-sided rivalry with the Alpine Cowboys.

“Well, I have this theory,” said Santa Fe manager Bill Moore, crossing his arms and squinting hard to add to the effect. “I have a superstition. I figure if we score more runs than the other team, we’re going to win. Most of the time when we don’t do that, we lose. It’s just a theory.”

“We can’t be putting them up on a pedestal,” he said. “We’re playing well and we know what we can do. We definitely know what they can do. But we got this far because we’ve put things together, and now it’s just a matter of looking at those guys like they’re not any more special than we are.”

Santa Fe makes its first appearance in the Pecos League Championship Series this week as the Cowboys host Game 1 of the best-of-three series Wednesday night in Alpine, Texas. First pitch is scheduled for 6 p.m. and league president Andrew Dunn said his website will provide a live video stream of the entire series.

Game 2 will be Thursday and a deciding third game, if necessary, will be Friday.

Both teams erased 1-0 series deficits in the divisional round; Alpine getting a pair of walk-off wins in the final two games to stun defending league champion Roswell while the Fuego hammered Trinidad 22-0 in Game 3 on Monday night.

“We’re playing some good baseball right now and we have to find a way to keep it going,” said Fuego second baseman Omar Artsen, the league’s premier base stealer all season.

The Brooklyn, N.Y., native has swiped 55 bags in 63 attempts, making him the most disruptive force on the bases in a league known for its power hitting.

Artsen said it’s vital that he keep that pressure on against Alpine.

“Most definitely because if I’m out there as a threat, the pitcher’s got to be thinking about me,” he said. “Anything I can do to get on base, I’m going to do.”

The abbreviated history between Santa Fe and Alpine is decidedly in the Cowboys’ favor. Since the Fuego joined the league in 2012, they have lost 17 of the 22 head-to-head meetings. That includes a four-game sweep earlier this season at Fort Marcy Ballpark.

Alpine won the championship in 2012 and owned the league’s best record this season. They took five of the six meetings with the Fuego. In their rivalry, all but four of the 18 games have been played in Santa Fe. The Fuego have never beaten the Cowboys in Alpine.

To say the Cowboys have Santa Fe’s number is a bit of an understatement.

“Yeah, maybe, but all we have to do is play our game,” said shortstop Craig Massey. “Really, it all comes down to pitching. Both teams can hit. Whoever gets the better pitching and defense is going to win this thing, and we’ve been doing a good job with both those things for a while now.”

Moore and the Fuego left Santa Fe on Tuesday morning for Alpine, making the nine-hour trip by caravan. The series was originally scheduled to begin Tuesday, but a rainout from Santa Fe’s series against Trinidad on Sunday delayed the start.

That delay only bolsters the Fuego pitching staff. It certainly didn’t hurt that Monday’s starting pitcher, Austin Carden, needed only 104 pitches to go nine complete innings in a series-clinching rout of Trinidad. It leaves open the possiblility of him coming back in Game 3, should the championship series go that far.

“Absolutely I’ll be ready,” Carden said. “If they wanted me to throw right now I’d do it. It’s the end of the year. I’m ready to go.”

If the series goes to a third game, ace Preston Zachrich (8-2, 4.00) will get the start with Carden one of the first out of the bullpen.”Right now, things are set up just the way we want them,” Kozel said. “Now all we have to do is go down there and play the way we’re capable of. It’s just them and us now.”