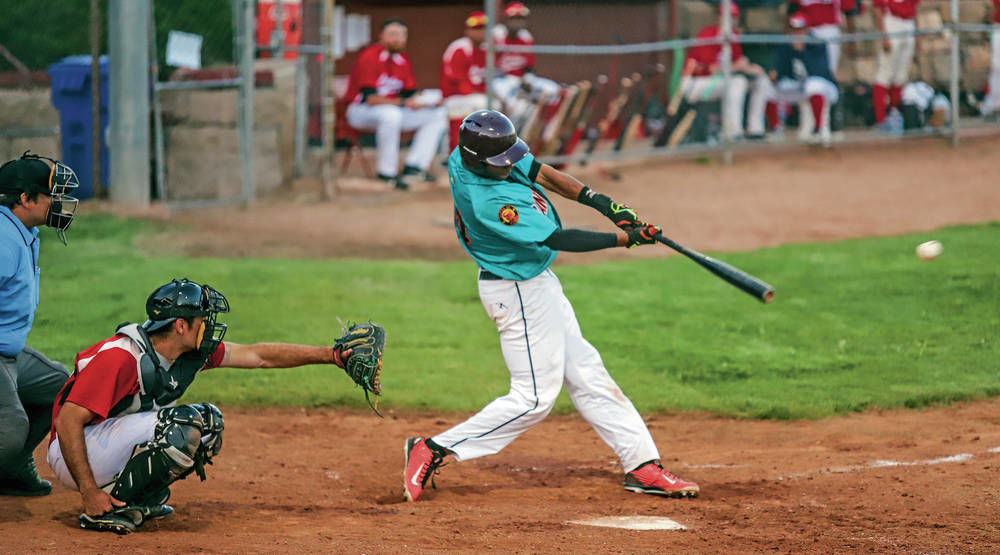 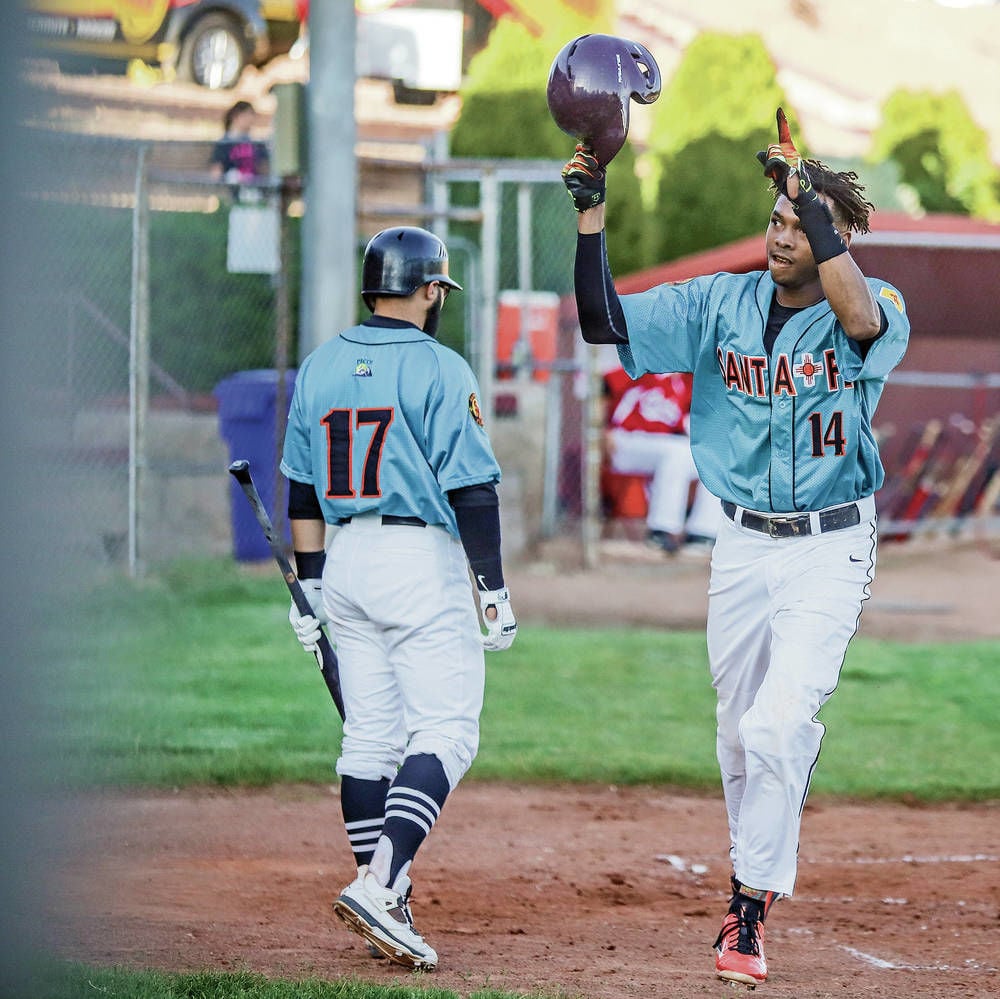 Stubblefield waves to fans in the stands following his first home run of the season during the team’s season opener. Gabriela Campos/The New Mexican 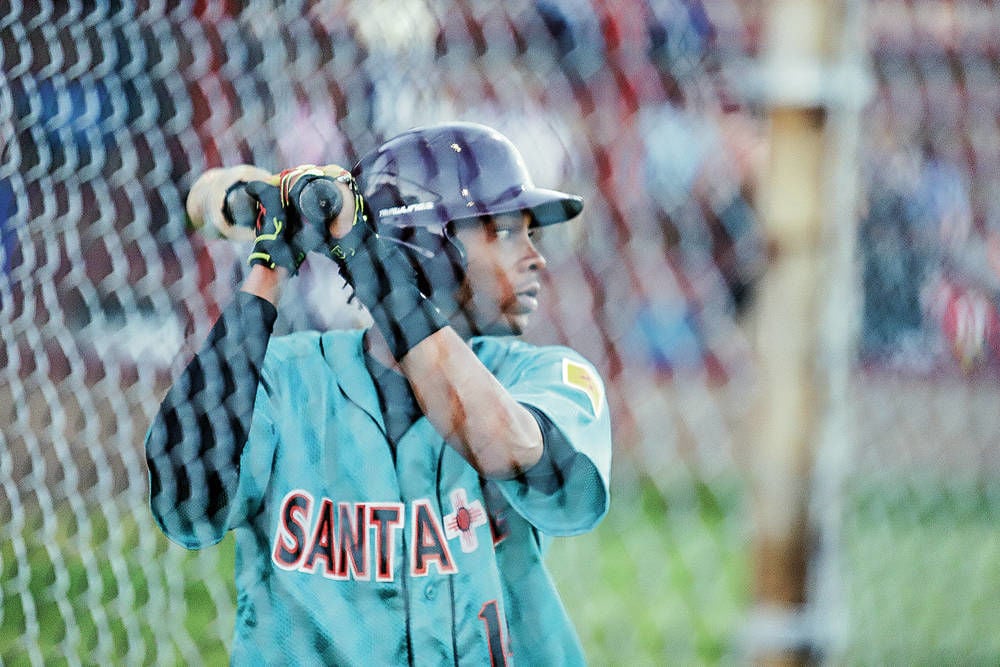 The Santa Fe Fuego’s Aaron Stubblefield prepares for his turn at bat during the Fuego’s opening game against the Alpine Cowboys on May 24 at Fort Marcy Ballpark. Gabriela Campos/The New Mexican

Stubblefield waves to fans in the stands following his first home run of the season during the team’s season opener. Gabriela Campos/The New Mexican

The Santa Fe Fuego’s Aaron Stubblefield prepares for his turn at bat during the Fuego’s opening game against the Alpine Cowboys on May 24 at Fort Marcy Ballpark. Gabriela Campos/The New Mexican

Challenge any of those things and be prepared to have a spirited debate about the semantics of all things Kansas City with the one guy from the Santa Fe Fuego to whom such things truly matter.

Aaron Stubblefield is native to Kansas City, which is home to one of the NFL’s most passionate fan bases, not to mention a place where Kansas basketball reigns supreme and everyone’s food of choice is rooted in the same vein that green chile is here.

Speaking of that, what’s the verdict on New Mexico’s official state question?

“I have to go green,” Stubblefield says. “My girlfriend knows all about that and she had me try both. Green all the way.”

“Nothing beats barbecue, though,” he insists. “That’s my food, man.”

Introduced to Santa Fe by way of the Fuego infield last year, the 26-year-old second baseman got off to an amazing start during the team’s season-opening series last weekend against Alpine. He raked six home runs in four games and enters this weekend’s action as the Pecos League leader in that category.

He also ranks in the league’s top 10 in several categories, like batting average, runs batted in, hits, runs scored, slugging and on base plus. He already is approaching his 2017 total of eight home runs, doing so with the kind of confidence a player can only dream of.

He credits part of it from his late-season promotion to Salina of the independent American Association last summer. He had what amounted to just a cup of coffee in the higher league — he had just 15 at bats in five games with the Stockade — but he learned a lot about what it takes to move up and out of his current situation.

“Just a better situation all around, you know?” he said. “Better fields, better competition, a better way of doing things. Being at that level let me know that I can be up there.”

Getting back to the American Association — or anywhere else, for that matter — goes to players who can not only hit the cover off the ball in the Pecos League, but those who can snare most anything hit at them. Stubblefield’s defense is therefore his most improved attribute.

“If you can learn to play defense on this field,” he says, looking out at the Fort Marcy Ballpark infield, “you can pretty much do it anywhere.”

Appearing as smooth as carpet from the grandstand, the infield grass is, in fact, strewn with uneven clumps of grass that make routine grounders a tooth-chipping delight. Same, too, for the infield dirt. It’s sandy and loose in some spots, hard as a sidewalk in others.

The team’s shortstop for 36 of his 44 infield starts last year, Stubblefield committed eight errors for a .818 fielding percentage; not great numbers but not all that bad considering he did most of his work at Fort Marcy. He has started every game this season at second base, committing just one error in his first 57 innings.

“Having a guy like [Stubblefield] in the middle of the infield only makes this better,” says Fuego manager T.J. Zarewicz.

Zarewicz signed Stubblefield to start last season and was only too happy to see him move up to Salina. It did have a negative impact on Santa Fe’s playoff push, but the opportunity it provided Stubblefield was invaluable.

“We all want to win and that’s what we’re trying to do every time we take the field, but if any one of these guys gets a call even during a game, I’m not going to waste time pulling them out and putting them on the road to a better situation,” Zarewicz said. “That’s what we’re all here for. We’re in the Pecos League hoping to move up, and when Stubblefield gets that chance again you can bet I’ll be happy to see him get out of here. He deserves it. He works hard for it.”

Sports is a huge part of Stubblefield’s life. He attended Tennessee Wesleyan and finished his collegiate career at Sterling College, working his way to the Pecos League as a utility player who eventually settled into his role as a middle infielder.

Above all, he loves his Chiefs and the Jayhawks.

“Chiefs fans are crazy and, yeah, I know all about that stuff,” he says.

As for Jayhawks hoops, go ahead and debate him. As any KU fan will, he’ll go the distance talking about the overwhelming tradition the Jayhawks have cultivated over the years.

For now, the summer months in the Pecos League and Santa Fe’s love affair with Mexican food will have to do.

“But that’s OK,” he says. “I love it here. I like seeing different places and this place, it’s different than anything I’ve seen so far.”