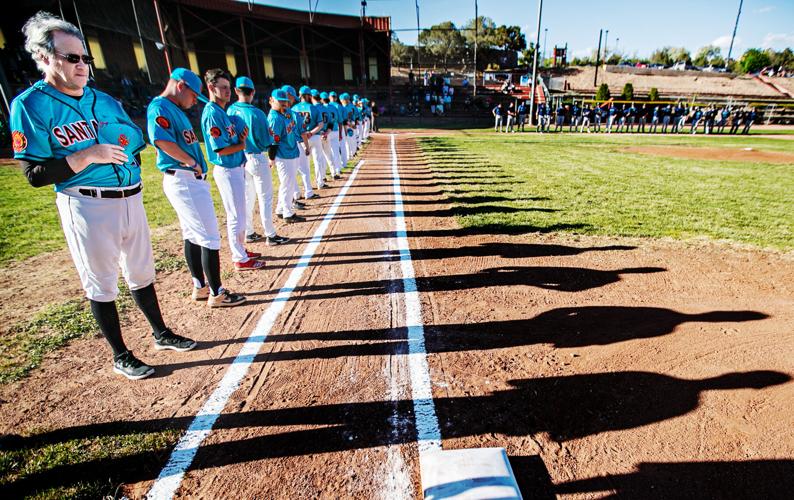 Fuego manager Bill Rogan stands with his team for the national anthem for a June 1 game at Fort Marcy Ballpark against Roswell. Rogan, in his second year with the team, expressed frustration toward Santa Fe’s mayor over field conditions, and he refuses to wear this season’s baseball cap because it includes a logo from the team’s sponsor, Best Daze Cannabis Dispensary. During games, he wears last season’s cap. 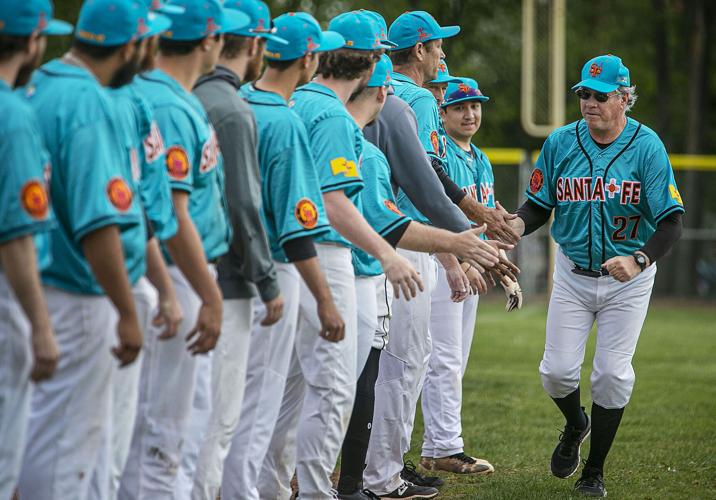 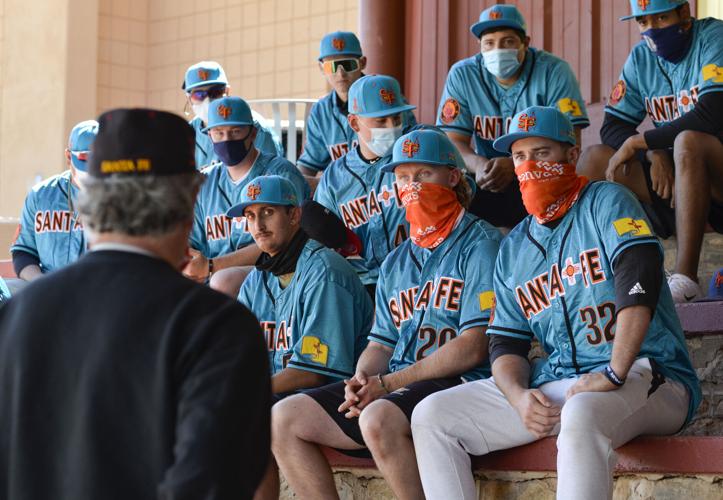 After watching two of his infielders take bad-hop grounders off their chests during a recent game at Fort Marcy Ballpark, Santa Fe Fuego manager Bill Rogan finally boiled over. He’d seen it too many times.

The Fuego committed five errors and lost that night to Colorado Springs, 25-9. It was a rare hiccup for a team that is playing as well as it has at any point in its history in the independent Pecos League. Entering this weekend, the Fuego had the second-best record at 9-4 in the Mountain Division with a number of players enjoying all-star-type seasons.

That didn’t stop Rogan from igniting a potential firestorm with the city, the league and even the team’s title sponsor. In his second season as the club’s manager, he called Fort Marcy’s notoriously tricky natural grass field a “disaster” and “dangerous.”

Fuego general manager Yvonne Encinias was having none of it. With the team since its inception in 2012, she’s seen many a manager and player come and go, each of whom have something to say about Fort Marcy.

“I think managers that come to Santa Fe having coached at privately owned baseball fields come here with the same expectations,” she said, pointing out that Fort Marcy is owned by the city and protected by historic preservation codes that require layers of approval before anything is done.

“The field itself is in the best condition it has been in since our inaugural season,” Encinias said. “Now I’m not saying this is the absolute best park in the state, but the league chose this park because of it quaint feel and historic appeal, not to mention the gorgeous backdrop around sunset.”

Rogan also has an issue with the team’s title sponsor this year, Best Daze Cannabis Dispensary. New Mexico legalized marijuana April 1, and the team was quick to land Best Daze as a partner. Their agreement has the dispensary’s logo embroidered on the team’s hats this season.

Rogan is declining to don this year’s lid. As of this week, he was still wearing last season’s cap.

“I don’t care if they sponsor the team, I just don’t think we should have it on our hats,” he said.

Rogan has instituted a team policy against cannabis, saying any player caught in possession or using it will be dismissed from the club. He hasn’t had to cut a player in his two years here, but when he was skipper of the Tucson Saguaros in 2019, he said he was forced to send one player packing.

Pecos League President Andrew Dunn said it is not a leaguewide policy, and each team has its own rules.

Encinias said the club has had difficulty landing reliable sponsorships, but seems to have forged a solid foundation with Best Daze. The entities are already discussing a potential partnership for the 2023 season.

“To me, I may be old fashioned and stuff, but baseball … You know, it’s about kids, it’s about families and stuff; I think it’s distasteful to have a pot shop as our sponsor,” Rogan said. “I know it’s all about money and whatnot, but it would be nice if some of the other businesses in Santa Fe, you know, decide to help sponsor our team. I sent out over

100 emails to businesses in the offseason and only two got back to me.”

Neither of those leads panned out, he said. It left Best Daze alone as a title sponsor.

Dunn took issue with Rogan’s comments about the deal — and especially about Fort Marcy. The league is leasing the facility from the city for $2,642 this season. The city also gets 10 percent of alcohol sales.

Admitting that Fort Marcy is far from the cathedrals one might see in affiliated professional baseball, Dunn said the Pecos League has worked hard to make its partnership with Santa Fe work for both parties.

“This is our 12th year as a league, and Fort Marcy is in better condition than it has been in years,” Dunn said. “At this point, the level of the support we get from the city gives us a chance to keep the team there. Bill Rogan’s comments do not reflect the thoughts of the league.”

Mayor Alan Webber was asked Friday to comment about Rogan calling him out. Webber declined to engage.

City Parks and Open Space Division Director Melissa McDonald said her staff has supplied consistent maintenance to Fort Marcy over the years, and her department’s protocol with the team is to have the general manager (Encinias) communicate directly with her.

“This is the first I’ve heard of any issues with the field,” McDonald said when reached for comment Thursday. “Getting it through [the newspaper] or hearing it from anyone else is a new process for me.”

McDonald said she counts herself as a Fuego fan, as do a number of the employees who work for her.

As part of her department’s lease agreement with the team, the city maintains daily basic upkeep of Fort Marcy by mowing and watering the grass, dragging the infield and removing waste.

“You know what it’s going to take to get this field fixed, in my opinion?” Rogan said. “It’s somebody losing an eye, somebody getting his windpipe crushed — or what do they call it, trachea? Someone having a real serious injury, maybe life-altering injury, and then they’ll say, ‘Oh we better fix the field.’ The old, you know, shut the barn gate when the horse’s out.”

One of the many issues Rogan pointed to is Fort Marcy is an open park. Home to the annual burning of Zozobra, which has drawn tens of thousands of people, and Santa Fe Wine & Chile Fiesta, which draws a few thousand, there are no locked gates or obstructions to keep people out. Anyone can access the field, and it’s not uncommon to see people walking their dogs across the field, visitors having lunch in the grandstand or kids playing in the grass.

Rogan’s suggestion is a potential seven-figure renovation that city officials say would create an uproar if ever done.

“I think the optimal thing would be to tear up the infield and put an artificial turf surface down,” Rogan said. “You can leave the outfield grass, but this field gets so much use that it’s always going to be torn up unless they decide to, you know, enclose the field where no one can get in and only permitted baseball is on there.”

City officials said hundreds of thousands of dollars to fix one park would be unfair to every other facility in need of equal or great repairs. McDonald said the city does what it can to keep every park as safe and modern as possible.

Rogan said his players have privately expressed concern over the Fort Marcy’s uneven infield surface. He referenced a game last season in which a player from visiting Alpine was hit in the neck by a bad hop and remained down for at least 10 minutes.

Rogan said he has written emails to Gov. Michelle Lujan Grisham and had regular discussions with Webber and other city leaders. In the past, he has requested outfield fencing, a video replay board and murals on top of the dugouts.

Built about a century ago, Fort Marcy is considered outdated for modern baseball purposes, Dunn said. That’s still not enough to drive the team away.

“Are you kidding me?” he said. “We love Santa Fe, the crowds are great and the team is as good as it ever has been.”

Advertisement
Copyright © The Santa Fe New Mexican | Terms of Use
Powered by BLOX Content Management System from TownNews.com.
You don't have any notifications.