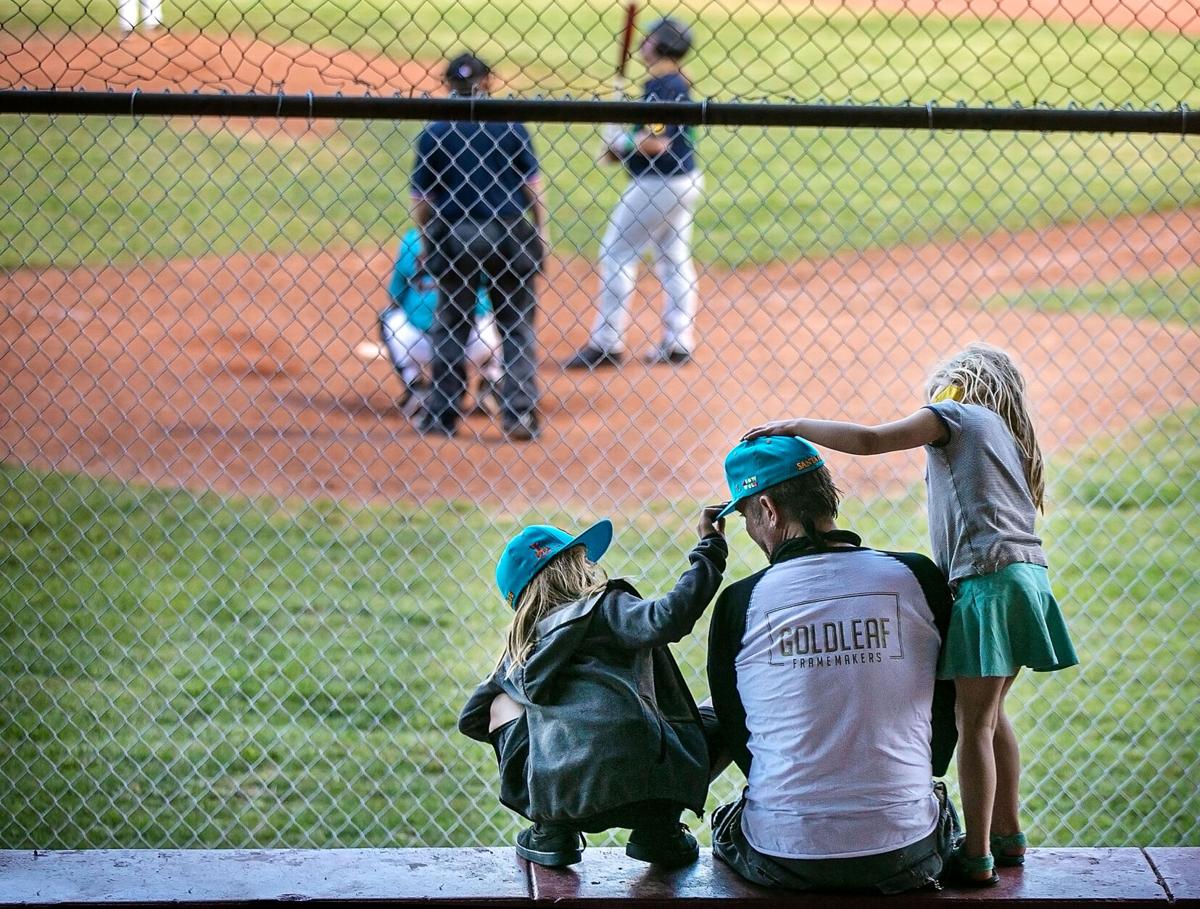 Shay, left, and her sister Uma swap hats with their dad, Roland Ostheim, at the Santa Fe Fuego game Friday at Fort Marcy Ballpark. The season opener sold 300 tickets and the typical marathon game ended late, with the Fuego beating the Roswell Invaders 20-16. 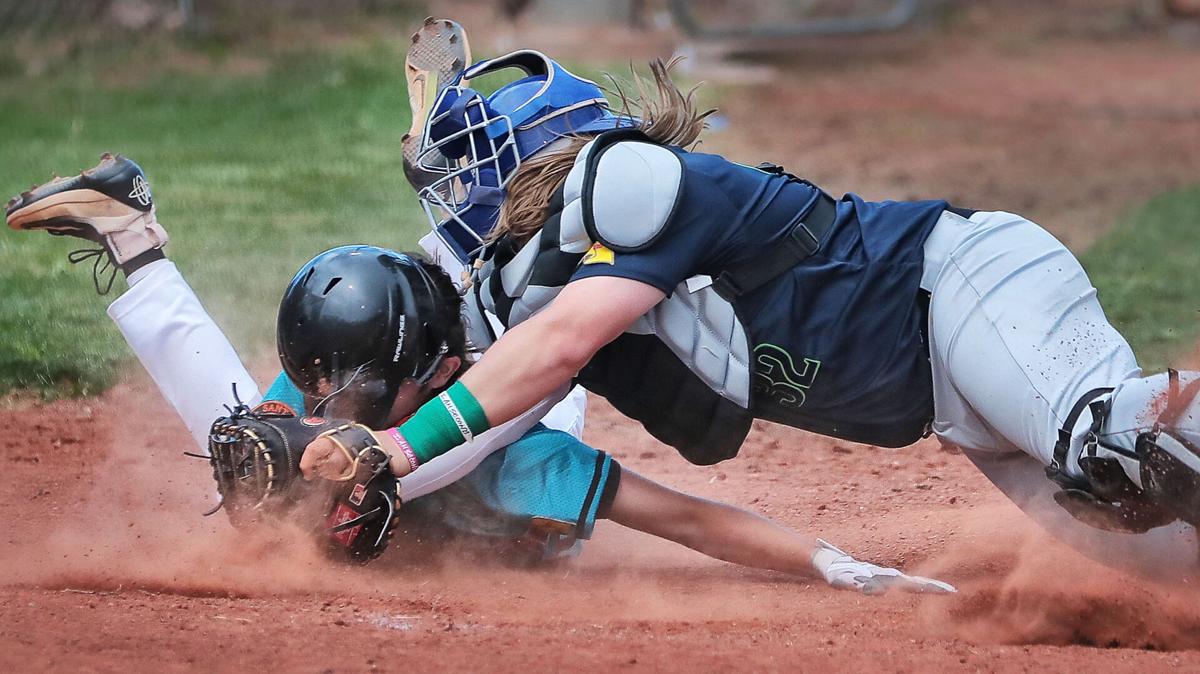 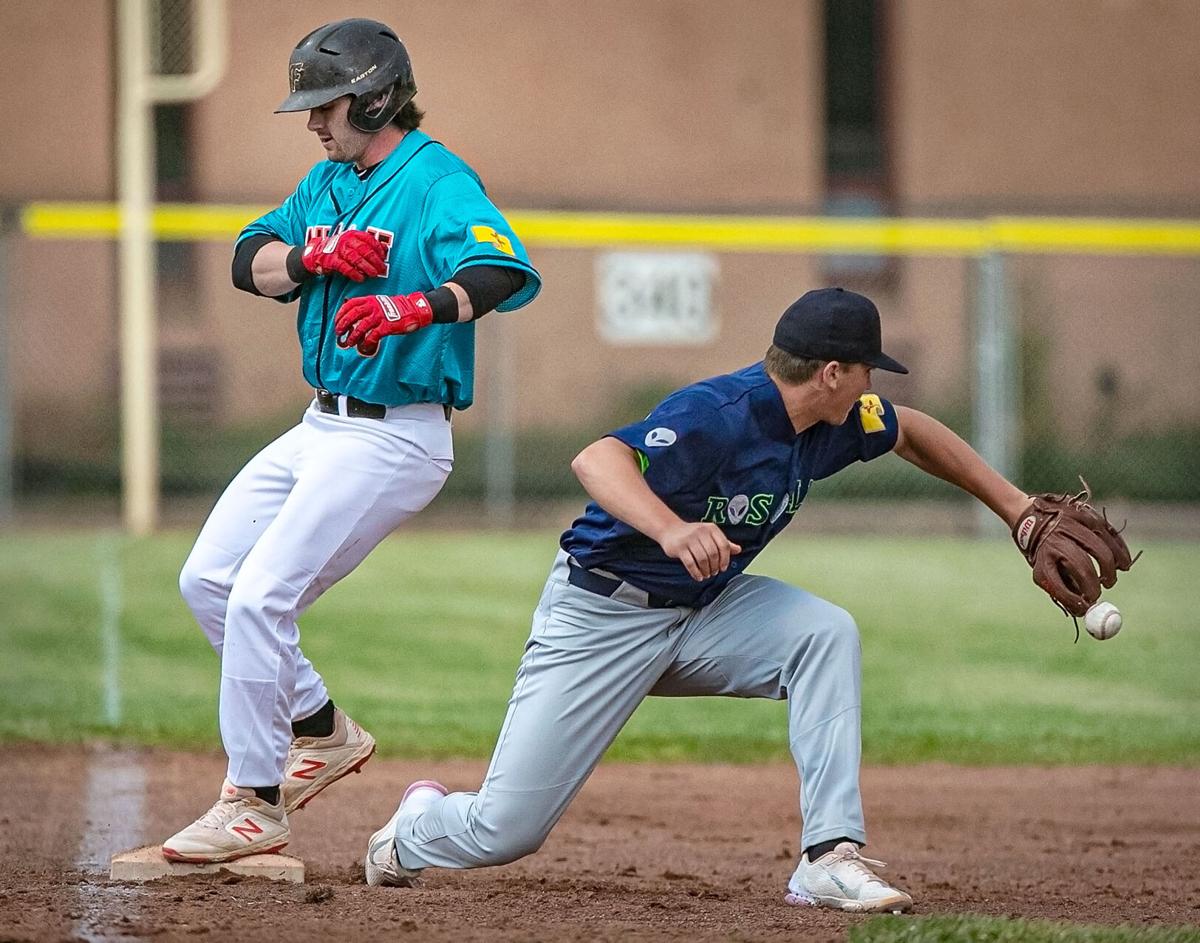 The Fuego's Parker DePasquale, left, is safe at third base against the Invaders' Robert Morosetti during the home opener Friday at Fort Marcy Ballpark. 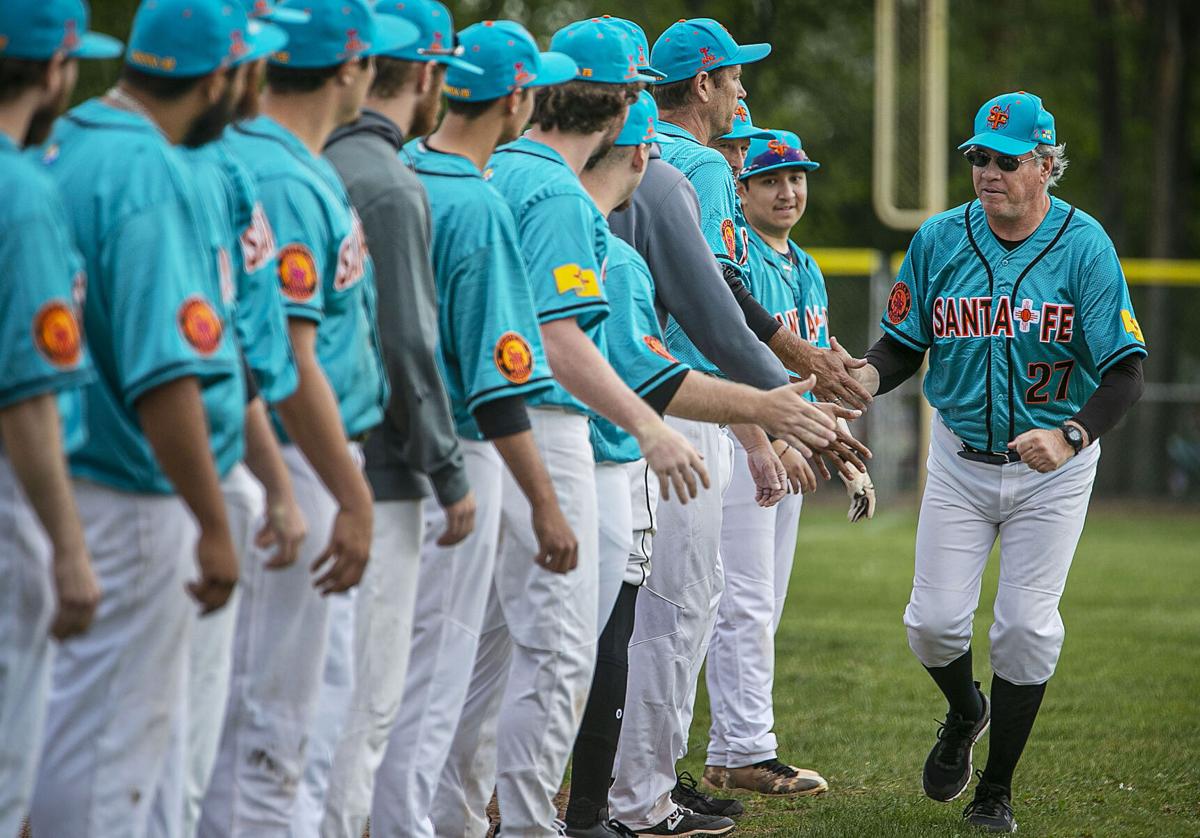 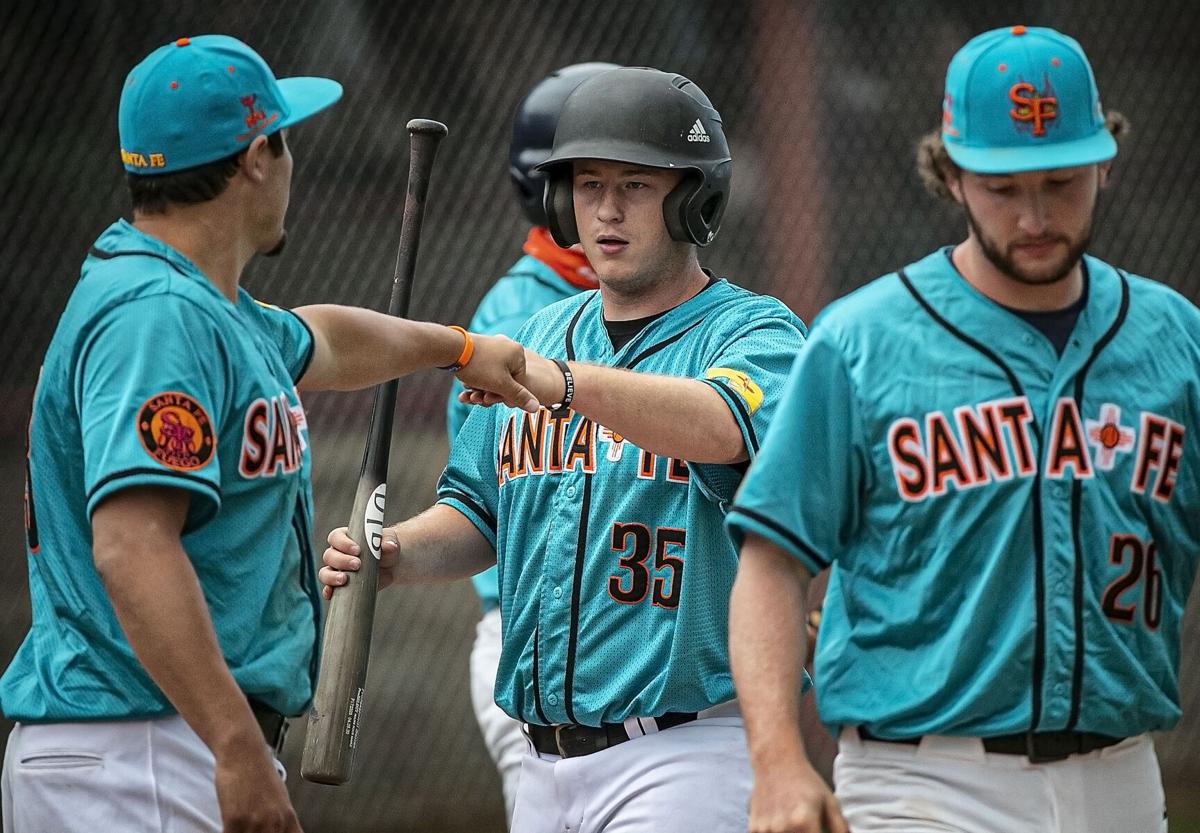 The Fuego’s Philip Buckingham celebrates with fellow players after scoring in the home opener Friday against the Roswell Invaders at Fort Marcy Park.

Shay, left, and her sister Uma swap hats with their dad, Roland Ostheim, at the Santa Fe Fuego game Friday at Fort Marcy Ballpark. The season opener sold 300 tickets and the typical marathon game ended late, with the Fuego beating the Roswell Invaders 20-16.

The Fuego's Parker DePasquale, left, is safe at third base against the Invaders' Robert Morosetti during the home opener Friday at Fort Marcy Ballpark.

The Fuego’s Philip Buckingham celebrates with fellow players after scoring in the home opener Friday against the Roswell Invaders at Fort Marcy Park.

It took nearly two years for Santa Fe to take advantage of a seventh inning stretch, nearly two turns of the calendar to take part in a pass-the-hat promotion and, of course, to cheer on the kids in a between-innings fun run around the bases.

The drought finally ended Friday night at Fort Marcy Ballpark when the Santa Fe Fuego hosted the Roswell Invaders in the first of 34 home games in this, the Fuego’s ninth season in the independent Pecos League.

The team sold 380 tickets for Friday’s game, but team officials suspect the crowd was closer to 500 people by time the first inning rolled around. Both of the ballpark’s parking lots were packed in the early innings, forcing some fans to get creative when getting to the game.

“What did I miss?” said Augustus Shipley as he walked toward the grandstand on the visitors side. “All these cars, I thought they were lighting Zozobra on fire again.”

Not quite. If anything, Friday’s game was a classic Pecos League/Fort Marcy marathon performance. It took 96 minutes to get through the first three innings and the final out wasn’t recorded until well after 10 p.m., some four-plus hours after the night began.

In what Santa Fe manager Bill Rogan described as a new team tradition, the player of the game after each win is handed an orange Fuego jersey that he’ll wear at the following day’s batting practice. It seemed only fitting that the first recipient was a hometown kid who never thought he’d be in that situation.

Matt Barela is a product of Capital High School but hasn’t played organized ball since his freshman year with the Jaguars. He grew up rooting for the Fuego, even getting a tryout from former team manager T.J. Zarewicz.

“I never had the velocity I needed to be out here but now I’m a little older and it’s all coming together,” Barela said of his two innings of relief.

He scattered three hits and gave up five runs, but he was able to bridge the gap between starter Troy Moen and the back end of the bullpen.

“Yeah, I was super nervous and, yeah, I could see my entire family up there watching me,” Barela said, his orange jersey draped over his shoulder. “Just to be out here on this field for this team with the people I love up there watching, it’s amazing.”

Barela got a no-decision, but he had enough left in the tank to help the Fuego (1-2) earn their first win of the season. In the first two games, the pitching staff surrendered 30 runs and hit seven batters.

“Those two were an abomination,” Rogan said. “At least things got closer to normal baseball tonight.”

The Fuego spotted Roswell a 5-0 lead before erupting for 10 runs in the bottom of the third and five more in the fourth. They sent 16 men to the plate in the third inning, the first seven of whom went station-to-station with either a single, walk or error.

The lead mushroomed to 20-7 in the later innings before the Invaders hung a 9-spot on the scoreboard in the top of the eighth. By then, many of the fans had headed home. That included Mayor Alan Webber, who pointed out that his ceremonial first pitch was a mid-80s slider that torched the middle of the strike zone.

For Rogan, it was good to have the Fuego back in Fort Marcy and baseball back in Santa Fe. Aside from a few minor upgrades, the ballpark was its same familiar self. The concrete grandstand still had the unforgiving feel it’s always had and the choppy infield grass produced a couple of “Fort Marcy hits” for the home team.

“After the last two games, it’s just good being here,” Rogan said. “But give it up for Roswell. They’re like cockroaches, they never go away. And that’s a compliment.”

GAME NOTESAll Fuego home games are now streamed live through the team’s website for a nominal fee. There’s even a play-by-play announcer with Aaron Rivera calling all the shots. ... The teams will wrap up their two-game series with a Saturday night game at Fort Marcy. First pitch is, as always, 6 p.m. ... The Fuego lost their first two games, 14-3 and 20-19, in Roswell. “I’d expect a lot of games to be just like this but, yeah, we’ve got some pitching help on the way,” Rogan said.

The photo accompanying this article looks photo shopped. The images of family in the foreground have been enhanced. Not really misleading, but still a no no for photo journalism

LOL, WOW!! It takes all kinds I guess, photojournalism policing. Didn't know that was a thing.

Anywho, thanks for the coverage Will and Jim. Go Fuego!! And a big CONGRATS to Matt Barela.