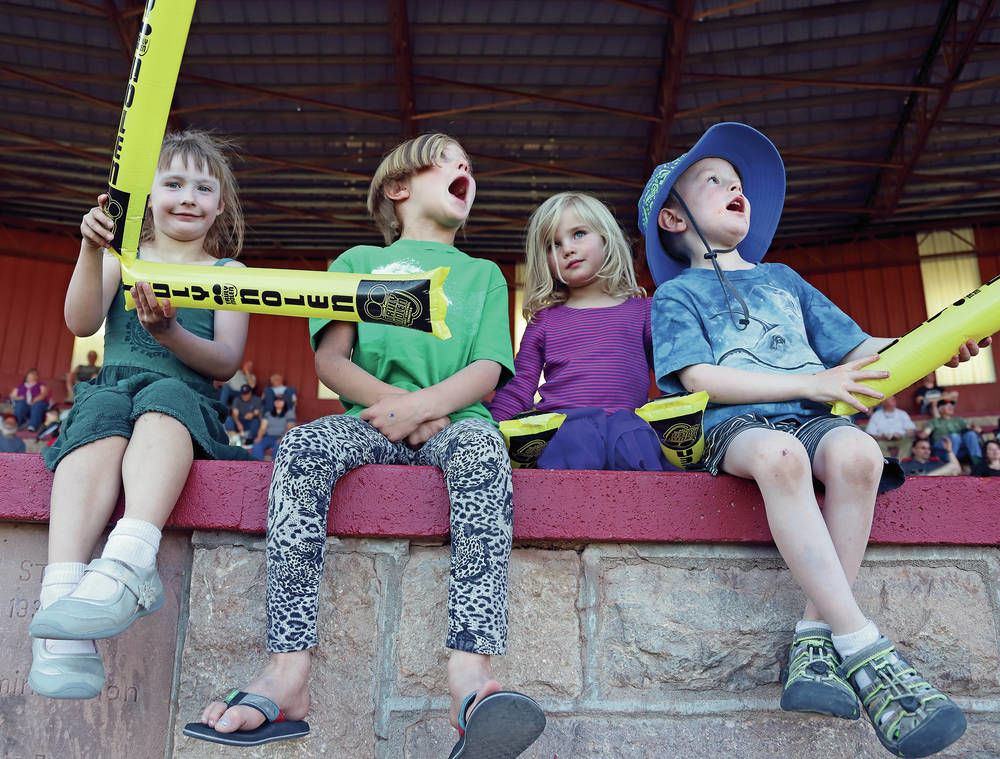 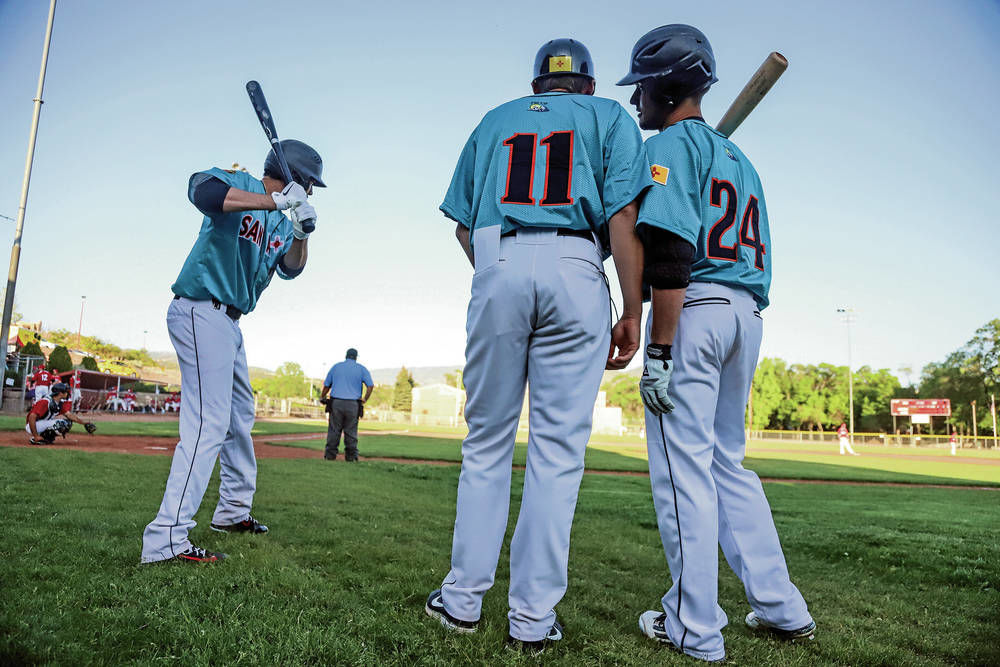 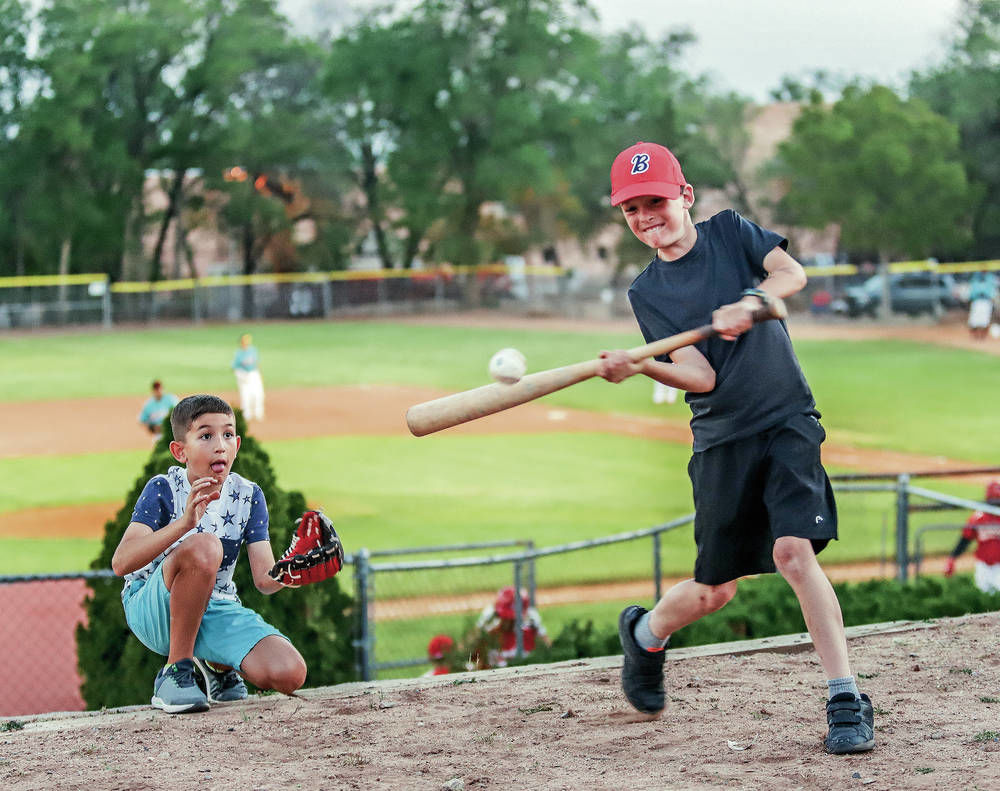 Greyson Fritzmeier, 10, gets a solid hit while Zachary Bartak, 10, plays catcher above Fort Marcy Ballpark while the Santa Fe Fuego play below Thursday evening in their season opener against the Alpine Cowboys. Gabriela Campos/The New Mexican 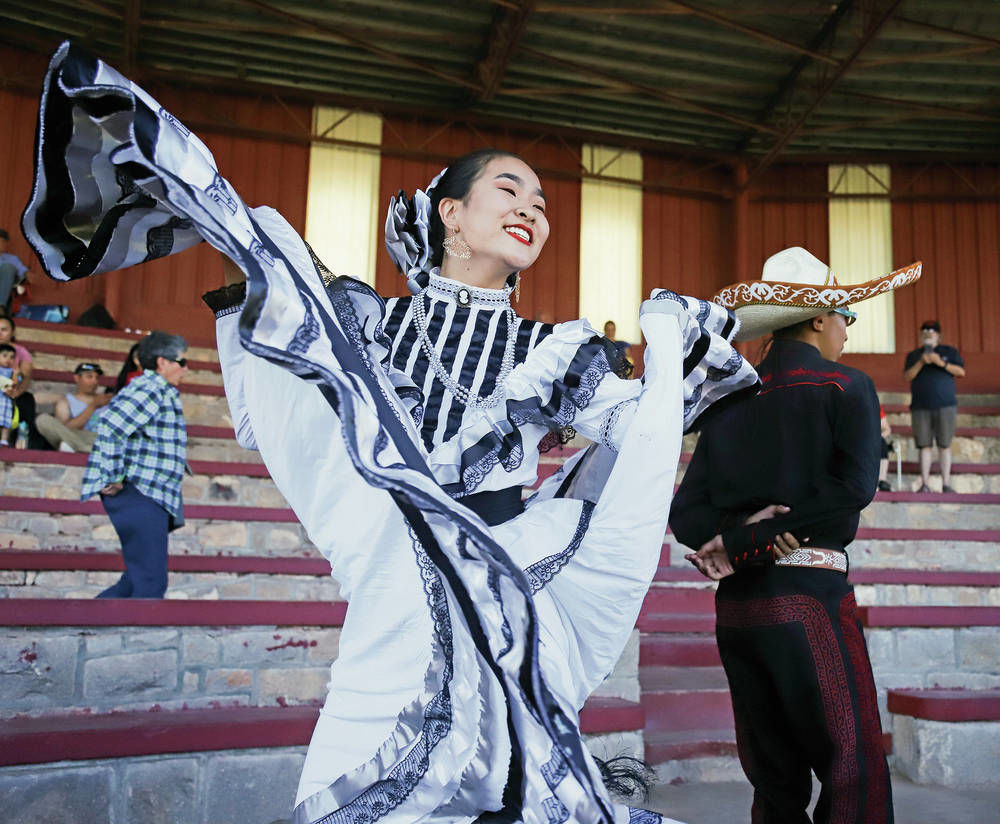 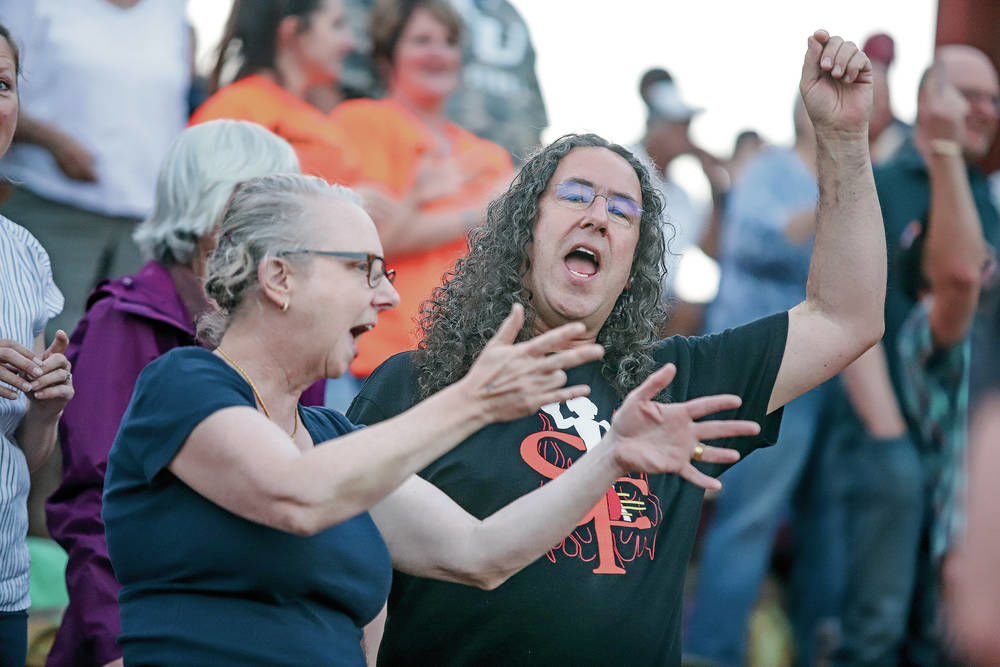 Elizabeth and Ned Harris, who help build Zozobra each year, sing “Take Me Out to the Ballgame” with the rest of the crowd Thursday during the Fuego’s opening game. Gabriela Campos/The New Mexican

Greyson Fritzmeier, 10, gets a solid hit while Zachary Bartak, 10, plays catcher above Fort Marcy Ballpark while the Santa Fe Fuego play below Thursday evening in their season opener against the Alpine Cowboys. Gabriela Campos/The New Mexican

Elizabeth and Ned Harris, who help build Zozobra each year, sing “Take Me Out to the Ballgame” with the rest of the crowd Thursday during the Fuego’s opening game. Gabriela Campos/The New Mexican

Jim Valvano planted a seed with his North Carolina State men’s basketball team 35 years ago by devoting part of an early season practice to cutting down the nets.

The ploy paid off as the Wolf Pack went on to win the national championship an hour down the road in The Pit.

On Wednesday, T.J. Zarewicz planted his own seed by orchestrating a postgame handshake line during his team’s final preseason workout at Fort Marcy Ballpark. The Fuego got to practice it for real on Thursday after picking up a 5-2 win over visiting Alpine to open the 2018 Pecos League slate.

About 500 fans turned out, many of them taking advantage of the team’s relaxed policy that allows food and drinks to be brought into the ballpark.

They were greeted by a pregame dance routine, the usual in-game treats of the kids’ fun-run around the bases — complete with one youngster taking a seat on the base paths every time she lost one of her pink slippers — and a brief appearance by the team mascot. Then there was the constant thumping of thunder sticks donated by the game’s sponsor and a middle-innings plumbing issue in which both restrooms flooded, forcing dozens of fans to wait in line for a pair of less-than-ideal portable potties behind the grandstand.

All the while, kids fresh off another school year made the area behind home plate their own personal playground while at least three different families brought their dogs in with them.

All in all, just another night in the Pecos League — minus, of course, for the offense.

“Just got ahead early and tried not to give up any cheap strikes,” Lazcano said.

He benefited from two double plays in the middle innings to avoid threats, helping him keeping his pitch count relatively low. He had 116 before giving way to Sunnafrank.

The Fuego never trailed in the game, scoring three times in the bottom of the first off Alpine starter Ely Gallego. They loaded the bases and sent nine men to the plate, scoring the first run on a deep sacrifice fly to straightaway center by Aaron Stubblefield. The ball was caught about two feet in front of the fence, but it allowed Danny Beaver to score the first run of the season.

Stubblefield finished 2-for-3 with a solo home run and a pair of runs batted in. Shortstop Robert Garza went 4-for-4 with an RBI and Chris Kwitzer had two hits with a double in his first professional at-bat.

As good as they were, the talk after the game was Lazcano’s performance on the mound.

“In three years in this league that’s one of the better outings I’ve seen from a pitcher,” said Santa Fe manager T.J. Zarewicz. “He did everything he had to do to stay in front and avoid trouble. He gave up some hits, yeah, but nothing so bad that it hurt him.”

Lazcano’s catcher was his former college teammate, Ambrose Romero. A stellar high school player at Albuquerque Eldorado, Romero made his professional debut with his parents sitting about 30 feet from the Fuego dugout. His father, Wally, wandered from one side of the backstop to the other snapping photos.

“He’s an only child, so my wife and I drove everywhere to go see him play,” Wally Romero said. “We weren’t missing this one.”

Romero is the only New Mexico player on the team and he made the most of his chance Thursday, bringing home a run in the bottom of the first when his initial at-bat came with the bases loaded and resulted in an error by the second baseman to bring home a run.

“No, not nervous because I’ve been doing this so long I’m used to it,” Romero said. “Fortunately the baseball gods were watching and helped me get a run home and get me on base thanks to their second baseman.”

Santa Fe had 11 hits as a team, but only two those went for extra bases. Normally such nights would be a problem. Not this time, not when the pitching allows for a quick Pecos League game (21/2 hours) and give the Fuego a chance to fine-tune that postgame handshake line.

“We’re professionals and congratulating each other after a win is something we’re going to get used to,” Zarewicz said. “We plan to be doing that a lot this year so, yeah, we will definitely practice that.”

GAME NOTES: The teams will resume their four-game series Friday night. First pitch for all remaining games through Sunday’s finale are at 6 p.m. … Fuego first baseman Mike Annone may have gone hitless in two at-bats, but he turned in the defensive gem of the night when he dove to his left on a blistering one-hopper down the line by Alpine cleanup hitter Caleb Davidson in the top of the fifth inning. He got up in time to record the out and end the inning. … Stubblefield also had a great play, running into foul territory to make a backwards-leaning catch of a pop fly. … The bottom of Santa Fe’s lineup was a combined 1-for-11 with three strikeouts and a walk.