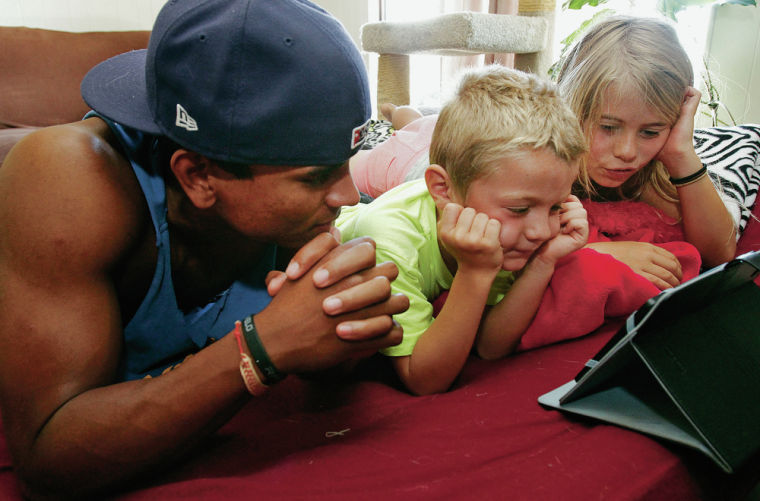 Omar Artsen watches a video with the Burnetts’ grandchildren, Nolan Walker, 7, and Bailey Burnett, 9, at their home on Friday. Jane Philips/The New Mexican 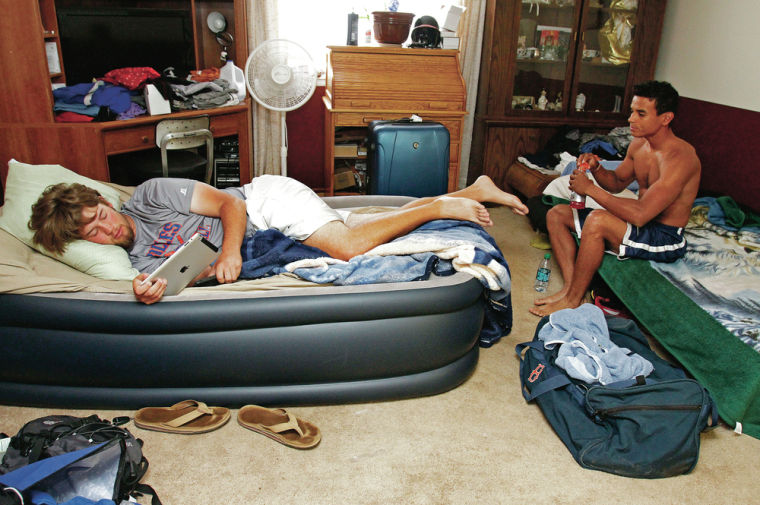 From left, Fuego players Corey Deigham, 24, from Jacksonville, Fla., and Omar Artsen, 24, from Brooklyn, N.Y., relax Friday at John and Desiree Burnett’s home. This is the second year the couple is hosting Fuego players at their home. Jane Phillips/The New Mexican 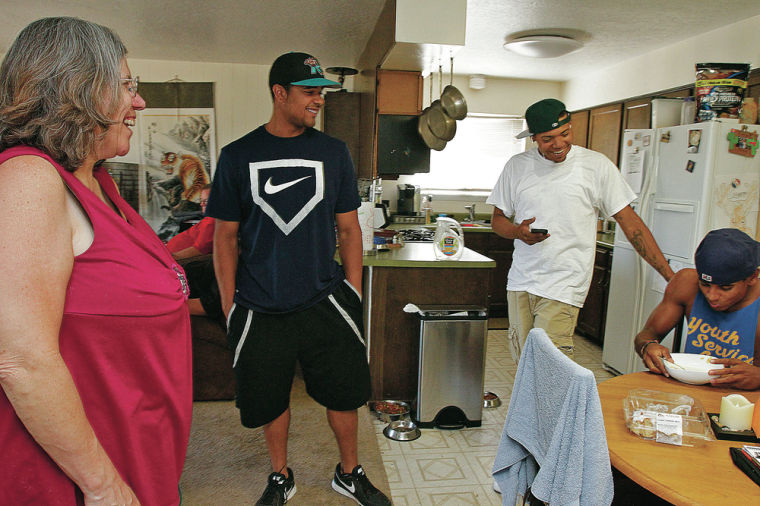 Desiree Burnett looks on while Eddie Malone, 23, of Queen creek, Ariz., Francisco Rodriguez, 24, and Omar Artsen, 24, both from Brooklyn, N.Y., hang out in her home on Friday. This is the second year she and her husband are hosting Fuego players at their home. Jane Phillips/The New Mexican

Omar Artsen watches a video with the Burnetts’ grandchildren, Nolan Walker, 7, and Bailey Burnett, 9, at their home on Friday. Jane Philips/The New Mexican

From left, Fuego players Corey Deigham, 24, from Jacksonville, Fla., and Omar Artsen, 24, from Brooklyn, N.Y., relax Friday at John and Desiree Burnett’s home. This is the second year the couple is hosting Fuego players at their home. Jane Phillips/The New Mexican

Desiree Burnett looks on while Eddie Malone, 23, of Queen creek, Ariz., Francisco Rodriguez, 24, and Omar Artsen, 24, both from Brooklyn, N.Y., hang out in her home on Friday. This is the second year she and her husband are hosting Fuego players at their home. Jane Phillips/The New Mexican

Charles Johnson doesn’t have a lot of time to make his dream come true, so he needs the kindness of strangers to help out.

The Santa Fe Fuego outfielder is playing in the Pecos League this year in the hopes of playing for a Major League Baseball affiliate, but the window of opportunity is starting to close for the 27-year-old.

“I’m in more of a difficult situation than these other guys because they’re all younger than me,” Johnson said. “If I’m not somewhere within the next year, I might as well call it quits.”

To pursue his dream, Johnson left his wife, Danielle, and his 5-year-old son, Cai, back in Houston for the summer — a sacrifice the family was willing to make.

“I’m fortunate that my wife is very understanding of the situation,” Johnson said. “She knew I wanted to chase this for a while.”

While Johnson and the rest of the Fuego pursue their goals, they don’t get paid much to do so. All the players make about $50 a week, so they have to stay with a host who voluntarily opens his or her home during the season.

Blea, 46, is the executive director for Phame Inc., a nonprofit performing arts center for people with disabilities. When she heard the Fuego players needed hosts, she was more than willing to let one occupy the extra bedroom in her house. However, she may have gotten more than she bargained for. In addition to Johnson, she also hosted Troy King and Austin Cox before they were were cut from the team, but she was happy to provide a home for them.

“I just wanted somebody to engage with,” Blea said. “With Charles, it’s been a great, great experience.”

Blea, who also lives and takes care of a 74-year-old woman with disabilities named Mary, said she was taking a big chance with her and Mary’s personal safety by housing strangers.

“I live with a vulnerable individual, so these people would have to come with integrity,” she said. “I’m making that gamble because I’m not just gambling with my life, but with her’s as well.”

The players may have been strangers at the beginning of the season, but Blea started to bond with them as time went on. She and Johnson try to spend as much time as they can together, and they even went to a few movies. When Cox was cut, Blea was a little distraught, and she took him out to dinner before he left.

“I really didn’t have a connection with Troy, but when Austin left, it was sad,” Blea said.

Now Blea is down to one player, but John and Desiree Burnett now have seven in their home.

This is the second year the Burnetts have been a host family, but this is the biggest amount of players they have opened their home to. They originally intended to only host a few players, but more needed shelter.

“We’ll take three or four, but that’s all,” said Desiree Burnett, 54, recalling when she originally agreed to be a host. “They keep coming, but that’s OK. We enjoy them.”

The Burnetts are no strangers to good will. From October to May, Desiree Burnett is a volunteer coordinator at the Interfaith Community Shelter, which serves people experiencing homelessness. John Burnett also would volunteer at the shelter too, but three years ago, he became disabled.

“Nobody would volunteer to be a host, until these guys were stuck in a hotel over here,” John Burnett said. “That just takes every penny they’ve got, so we said we would take a couple more that were temporary. Well, we’re probably going to finish the season with seven.”

Outfielder David Brandt, a 23-year-old from New Hampshire, was one of the first players to move into the house. He said the Burnetts immediately told him he could help himself to anything, but he said it took him a while to take them up on that offer.

“They were like ‘Hey, anything you want is yours,’ ” Brandt said. “I was a little hesitant at first, but after about the third week, it really did feel like home.”

It feels like home now for Brandt, but it’s a home with a lot of people in it. Brandt got bedroom privileges since he was one of the first players to show up, but players Corey Deighan and Omar Artsen sleep on beds in the living room. It may be a little crowded in the Burnett household, but everyone is already used to it.

“There is a line for the bathroom sometimes, but it’s not a big deal,” Brandt said. “You just have to hold it in for five minutes.”

But the Burnetts don’t just provide beds and a roof. They realize the players don’t make very much money and don’t eat well all the time. When the team is on the road, the players usually have to rely on fast food or takeout to satisfy their hunger after a late game. As a result, the Burnetts like to keep the refrigerator and cabinets stocked.

“I get the food, and they pretty much go for whatever they want,” Desiree Burnett said.

She also buys anything else the players might need, including muscle balm after a tough game, and even washes their baseball pants so that they’re as white as they can be before games. While she provides motherly services, she husband takes care of the fatherly duties, like giving some players an earful for chewing tobacco.

“We treat them like they’re our children,” he said. “I always give them unwelcome fatherly advice.”

While the fatherly advice may be unwelcomed, the players are thankful for everything the Burnetts provide.

“I can’t say how grateful I am to come home and have meat in the freezer and food in the fridge,” Brandt said. “Sometimes when I come home from a road trip, my bed will be made. John and Desiree Burnett are extremely generous.”

All the generosity is really no big deal to the Burnetts. After their three children grew up and left the house, they were more than happy to have people to talk to. They also get free tickets to Fuego games. Host families get one ticket per player per game.

“We enjoy the interaction,” John Burnett said. “The three empty rooms were just empty space. On a strictly selfish point of view, we get to get into free games.”

Once the Fuego season concludes, the players will leave the homes to go back to their home states — and they will be missed.

“When Charles leaves, it’s going to be a sad moment,” Blea said. “I’ve already opened my home to him if he comes back next year. Hopefully, he’s a big-league hot shot by then.”

Johnson is hoping to be in the big leagues next season, but he is not going to forget Blea’s helping hand.

“It’s humbling that somebody is willing to share their lives with you and open up themselves for you,” Johnson said. “I was thinking about getting Anna a lot of gifts before I leave just to show her that I’m grateful.”

Blea is not looking for gifts though. She is just happy to share whatever she can with someone who needs it, and she wants to make Johnson’s dream a little easier to obtain.

“There are so many obstacles in life that we humans face on a daily basis, and if I could eliminate or minimize a hurdle for Charles, I would definitely do it,” Blea said. “He can achieve his dream just a little bit easier. I believe that if I have extra, I’m going to share it with you. I’m honored that I was able to share that with Charles, and I’m glad I made the choice to open up my home for a guy like him.”

We are a host family too and I really enjoy having our three player's with us. My son enjoys it too. It's sad when season is over we miss everyone. It's amazing how you bond with each of the player's they become family

Santa Fe is such a giving community! Thank you host families for opening your homes to these young men as they pursue their dream of the Big Show!