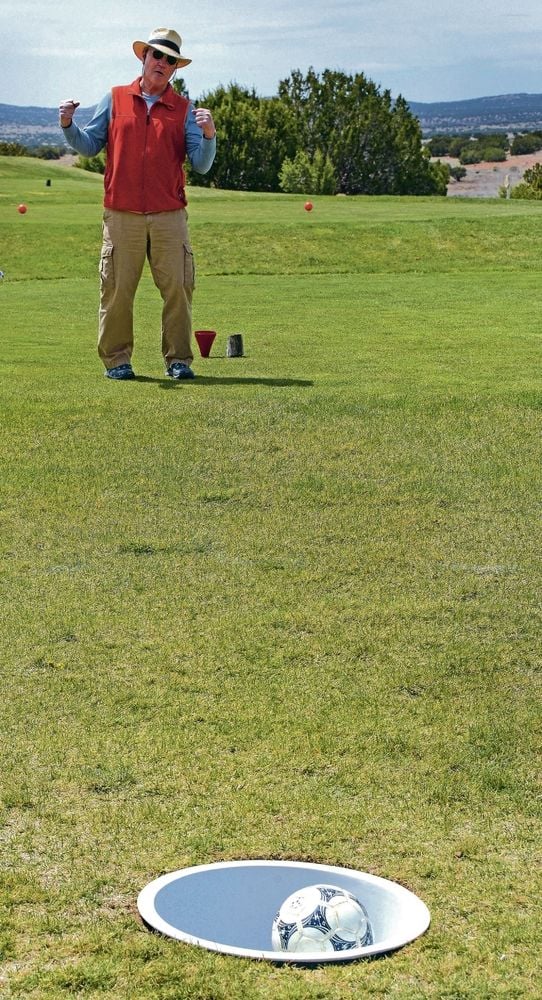 Phil Kithil celebrates after his ball drops into the third hole during the ‘Demo Days’ footgolf event Saturday at Marty Sanchez Links de Santa Fe. Kithil recorded the first birdie ever on the course as he got a 2 on hole three. Clyde Mueller/The New Mexican 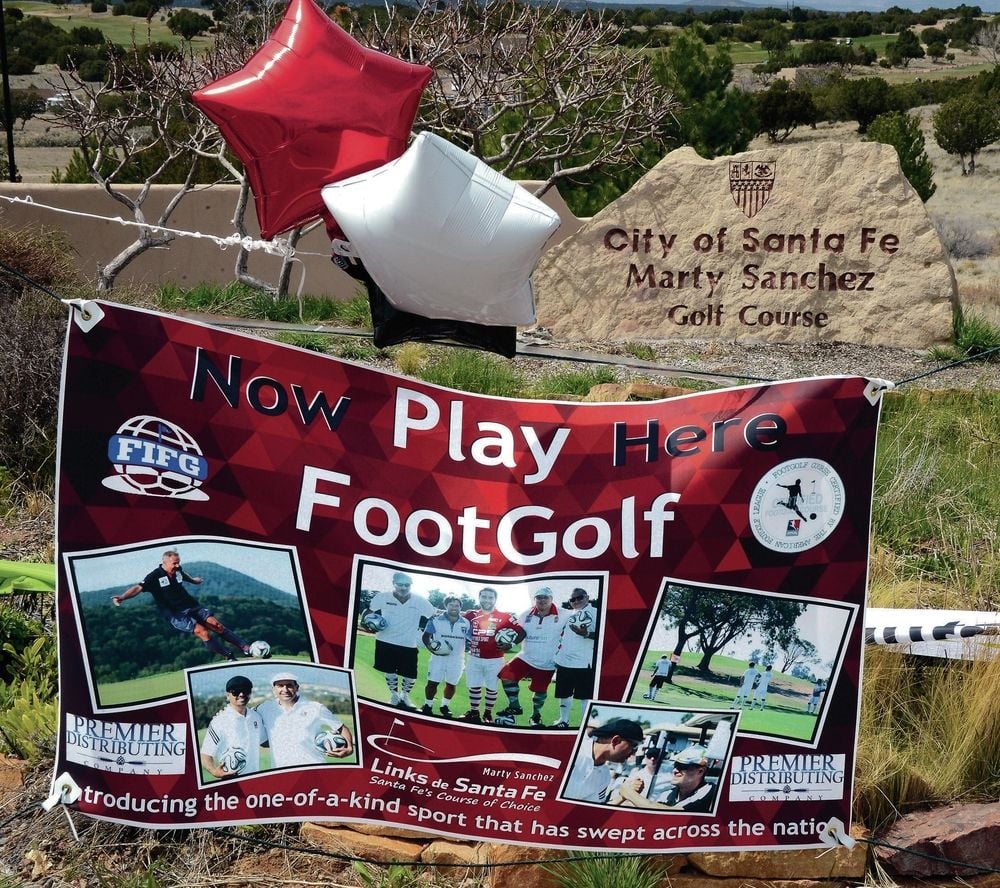 Phil Kithil celebrates after his ball drops into the third hole during the ‘Demo Days’ footgolf event Saturday at Marty Sanchez Links de Santa Fe. Kithil recorded the first birdie ever on the course as he got a 2 on hole three. Clyde Mueller/The New Mexican

It took Phil Kithil all of 10 minutes to become a part of history on Saturday.

Then, he added to his lore in 20 minutes.

The 72-year-old Santa Fean was the first footgolf participant at Marty Sanchez Links de Santa Fe, as the golf course kicked off its new course built specifically for the soccer/golf hybrid sport. He strolled to the welcome tent at the bottom of the hill that led to the “Great 28” par-3 course for golfers and footgolfers alike with his own soccer ball, khaki pants and a sense of adventure.

Kithil admitted he didn’t know anything about the sport, other than the story he read about the new sport’s unveiling at Marty Sanchez with its “Demo Days,” which ends Sunday, earlier in the week. The event is free to the public, but playing the nine-hole course will cost $16 starting Monday.

A lifelong soccer enthusiast and a former golfer, he was intrigued by the idea of combining the rules of golf with the use of a soccer ball.

“This is an interesting blend,” Kithil said as he visited Marty Sanchez staff members at the welcome tent who were waiting for interested participants to show. “It seems like a wacky idea. I’m familiar with Ultimate Frisbee and Frisbee golf, although I am not a big Frisbee fan. But I am a soccer fan, so it’s sort of an interesting idea. I thought, ‘What the heck?’ ”

By the third of the nine-hole course, Kithil added another first to footgolf — becoming the first person to birdie a hole when he knocked in his second shot from about 15 yards into the 21-inch diameter cup.

Kithil liked what he had experienced, and didn’t rule out a return visit.

“I might see who else wants to give it a try,” Kithil said. “No guarantees, but I have time on my hands.”

By the end of the first hour, staff members estimated about 17 people were on the course, and another 20 were preparing to venture from the club house to partake in the inaugural day for the sport. Among the first-timers was Rob Carter, the director of the city’s recently formed Parks and Recreation Department, of which Marty Sanchez is a part. A soccer fan and coach himself, Carter enjoyed his time on the course as Kithil’s partner along with Jennifer Romero, the Municipal Recreation Complex administrator.

Of course, he acknowledged that some properties of golf remain the same regardless of the name of the sport, such as the dreaded slice shot. He pulled his second shot on the fourth hole to the right and scrambled to get his bogey.

“It’s really neat,” Carter said. “I’ve been doing soccer for so many years, and just to see an alternative on a golf course. I know I will be back to try it a few more times.”

The family of Clovis’ Nick and Amy Holmes took advantage of a trip to watch the Santa Fe Symphony to add footgolf to its itinerary. In tow was son Brenden Holmes, who was celebrating his 16th birthday, and daughter Emma, making them the first foursome on the course.

Amy Holmes said she found out about “Demo Days” online and wanted to give the sport a try. The family did its part to meet the attire requirement for the course, as the family showed up in polo shirts, shorts and knee-high socks.

In a theme that was consistent with everyone else on the footgolf course, the Holmeses’ hook to the sport was grounded in the soccer portion. Nick Holmes has hit the links a few times, but that was the extent of the family’s golfing experience.

“We dabble in soccer and none of us play golf,” Amy Holmes said. “We thought this would be a fun way to pull in that.”

Nick Holmes talked about having to take into account the terrain of the course, much like many golfers have.

“You think you have control of the ball,” Nick Holmes said. “Until you kick it on hills or it hit rocks.”

Kate Mitchell of Santa Fe was not quite the novice many others were on the course. The tournament/special events coordinator of Northern New Mexico Soccer, she took part in a footgolf fundraiser at the Santa Ana Golf Course last year and played its 18-hole course.

So she was well prepared, as she had soccer balls for all of the foursome in her group.

“I think this is a great idea,” Mitchell said. “I am a freakish soccer fan, so the more I can kick it about, the better. And we have a guest visiting from Wales, and he’s going to try it for the first time.”

And what better time than Saturday, when a lot of history was being made already?