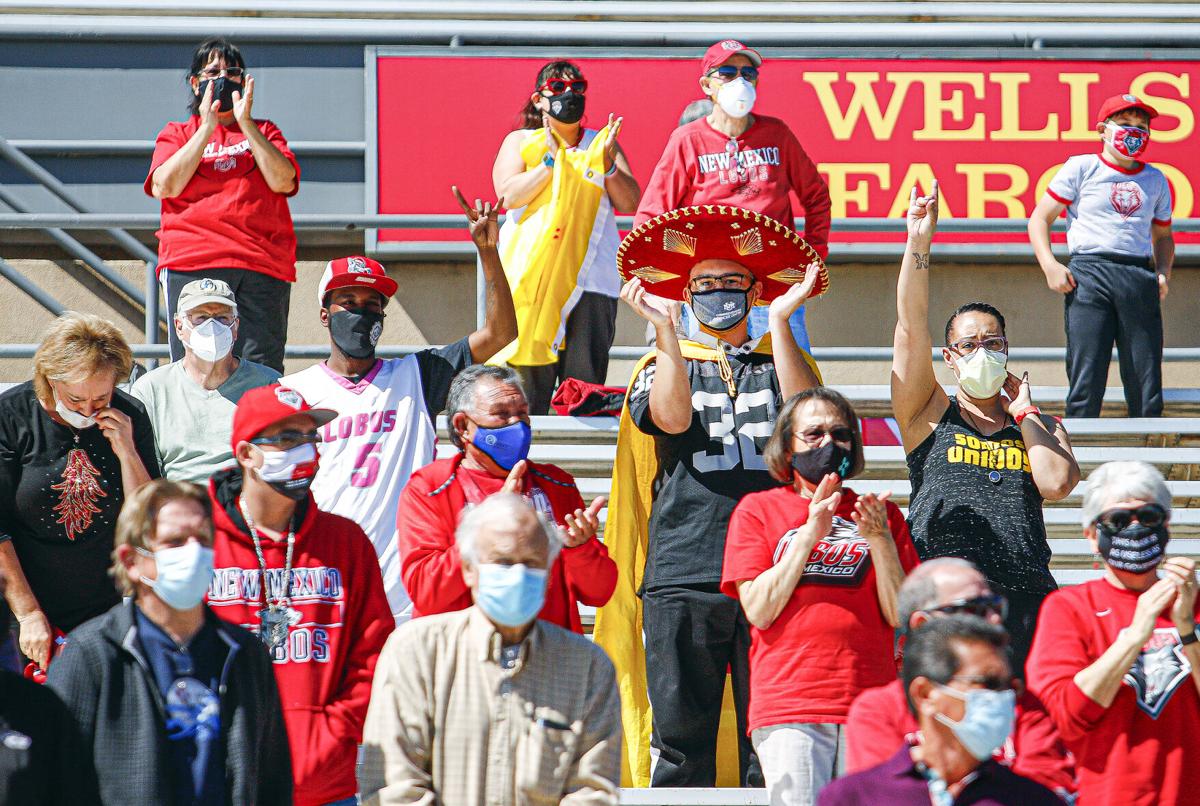 Lobos basketball fans cheer as the Pitino family is welcomed onto the field at University Stadium on Thursday. Richard Pitino was officially unveiled as the 22nd coach of UNM men's basketball. 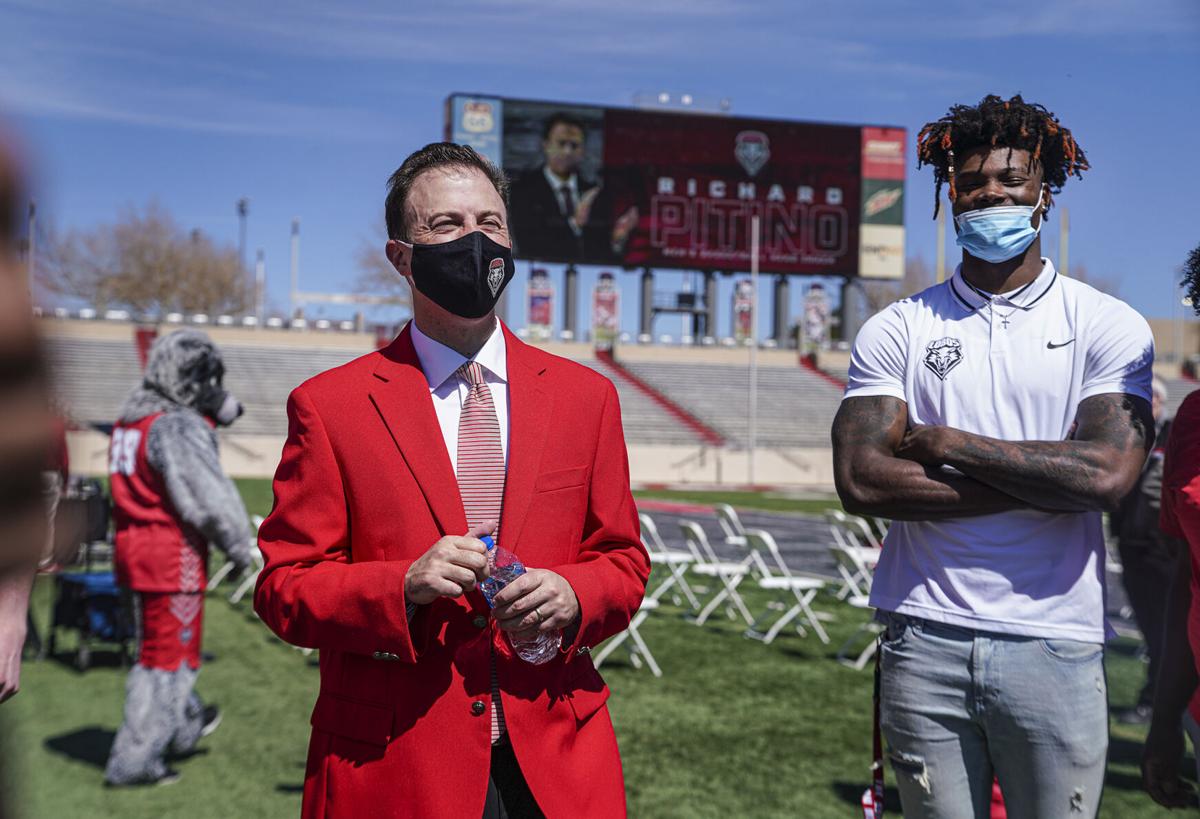 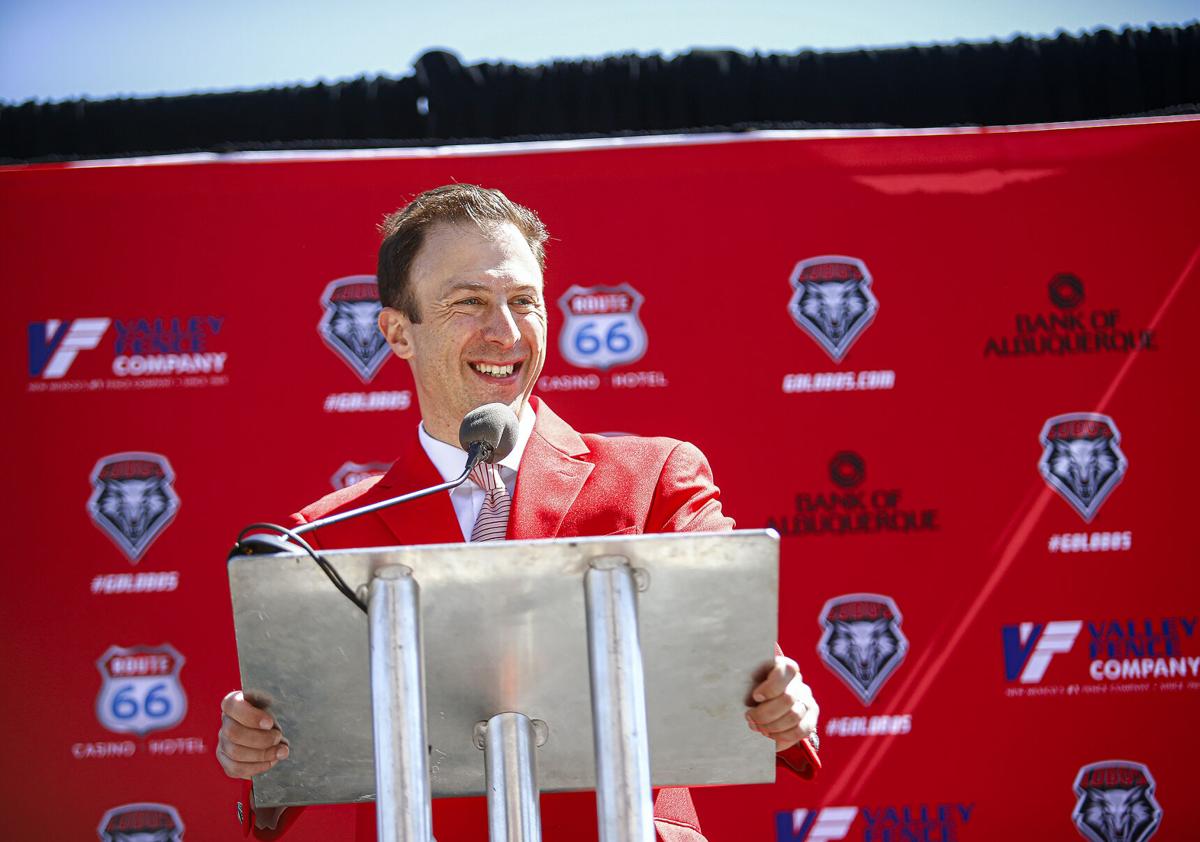 Lobos basketball fans cheer as the Pitino family is welcomed onto the field at University Stadium on Thursday. Richard Pitino was officially unveiled as the 22nd coach of UNM men's basketball.

ALBUQUERQUE — It’s fitting, perhaps, that the introduction of football coach Danny Gonzales took place in The Pit while the ceremony for new men’s basketball coach Richard Pitino was held inside University Stadium.

Strangers to one another until the last week, the two men will forever be linked now that their respective careers have intersected at the University of New Mexico.

“One of the first calls I got when I was getting interviewed by this school was from [baseball coach Ray] Birmingham, and I’ll always remember how special it was to hear the excitement he had for this place,” Gonzales said. “I know how important it was for me to do the same with coach Pitino. I love New Mexico more than anything, and if you’re going to be here, you need to love it. You have to want to be a Lobo.”

Pitino, 38, comes to UNM from Minnesota, a lower-tier Big Ten basketball program whose best years were scrubbed from the history books because of scandal and NCAA violations. Pitino’s eight years there were scandal-free, but they were also below the threshold of expectations of those wanting the Golden Gophers to butt heads with the Big Ten powerhouse programs and make deep runs into the postseason.

What’s more, they were eight years of living in the shadows of a crowded sports market that includes the NFL’s Vikings, NBA’s Timberwolves, NHL’s Wild and baseball’s Twins, not to mention UM’s football team.

In New Mexico, Lobo basketball is always a topic of conversation.

As persuasive as Gonzales may have been in those initial days, so much of the credit for getting Pitino on a track that eventually led to Albuquerque had to do with two of the greatest coaches in the history of college basketball: Pitino’s father, Rick, and former Florida coach Billy Donovan.

From 2007-09, Richard Pitino was an assistant on his dad’s staff at Louisville. In those two seasons, the Cardinals won 58 games, reached the Elite Eight and twice won the Big East title. In the summer of 2009, Donovan called Pitino saying he needed a young coach who’s hungry and is an ace in recruiting. The older Pitino recommended his son.

“At the time I said, ‘Well, why would I do that?’ ” Richard Pitino said. “I’m at Louisville, Florida’s a great school, but Louisville’s a great school. The more I thought about it and the more I talked about it with my wife, Jill, we just felt like it was a great opportunity to grow as a person and as a basketball coach, and it was the greatest thing I ever did.”

Pitino considers himself lucky to have learned under a pair of legendary figures, and when Donovan was asked by UNM athletic director Eddie Nuñez — himself a Donovan protégé — for his insight on who would make a good fit for the Lobos, Pitino’s name came up.

In fact, Pitino credits Donovan with helping him land the Minnesota job because of Donovan’s relationship with UM’s former athletic director.

“I told Eddie during the process, I said, ‘I don’t BS a lot but I can’t do that to a family mem-ber,’ ” Pitino said. “So I’m going to give you the truth whether you like it or not about me, and about what we’re going to do here, because Billy Donovan is too special to me. Very, very grateful to him.”

Pitino joked about the possibility of scheduling his dad’s team, Iona, next season when asked about his philosophy on scheduling. Part of bringing the fans back is creating a slate that includes opponents that get fans excited.

“We are very, very open to creative games to make sure that Albuquerque and the state of New Mexico is buzzing about college basketball,” Pitino said. “We’ve got to fill The Pit, we’ve got to get these fans back and we’ve got to get unbelievable opponents in this building. I’m always open to that.”

It turns out one fan who doesn’t need convincing is Gonzales. Sitting a few rows back from the podium where Pitino spoke, he said the new hoops coach better get used to seeing him at games in The Pit.

“When I met with Eddie all I heard about was coach Gonzales,” Pitino said. “So I’m sitting there going, ‘How long has this guy been here?’ And I googled quickly; he’s been here one year. I went to the bathroom quickly to see his background. And I get it. After meeting him and his unbelievable wife, I get it. Very relatable, you can tell that New Mexico really matters to them, and they’re going to pour their heart and soul into building this program for the state of New Mexico.”

Likewise, Gonzales expects Pitino to have free run of the sidelines at University Stadium.

“Heck, if he wants to wear a headset and stand right next to me, I’ll get him a headset,” Gonzales said. “This has always been a basketball school, but UNM needs both of us to be good at the same time. It can happen. You just need to have the right guy in there, and I think we’ve got him.”