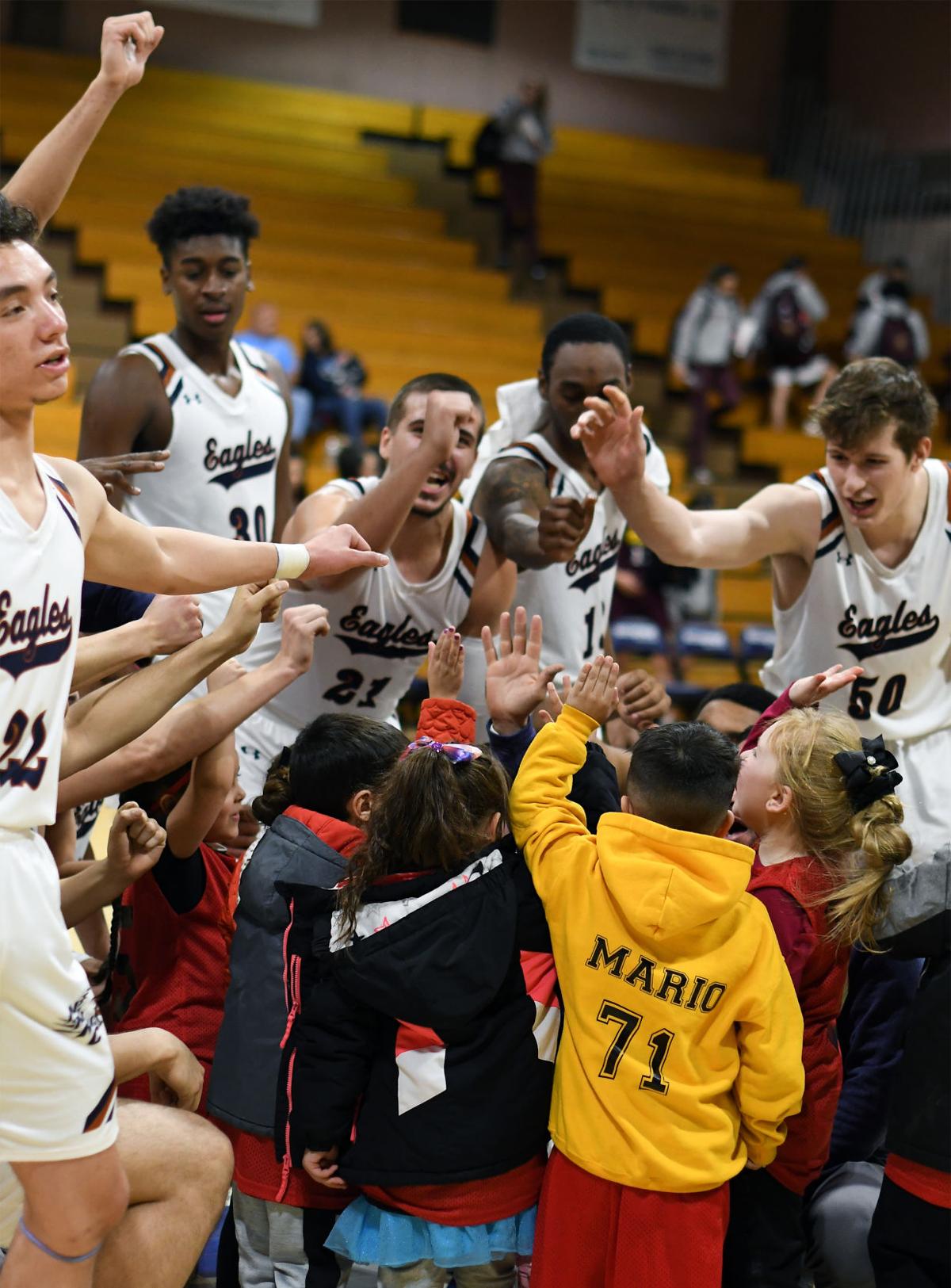 The Northern New Mexico College men’s basketball team celebrates with fans after an 88-66 win over Park University Gilbert on Friday. The Eagles finished the regular season on a six-game winning streak and are 8-15 overall. 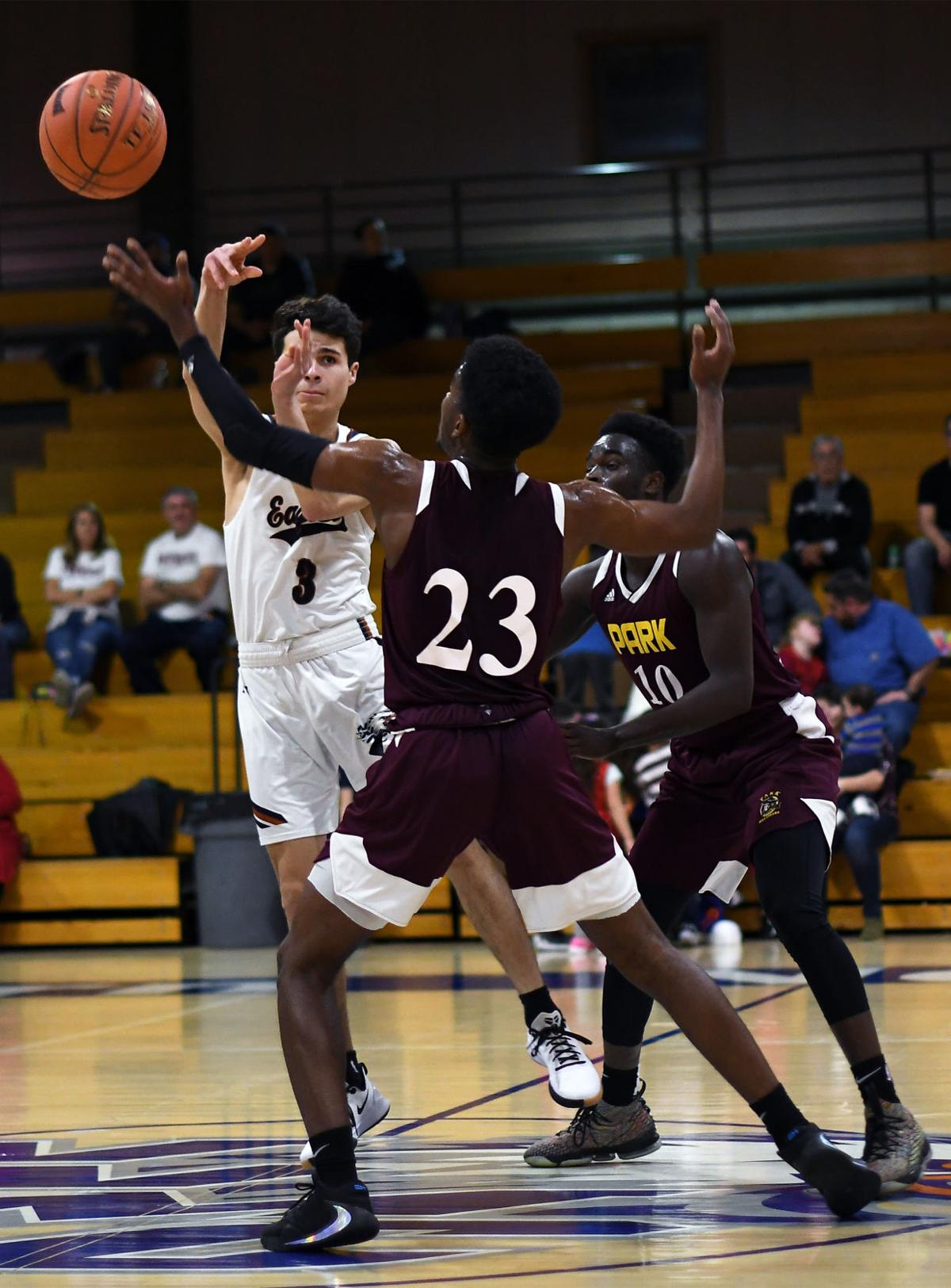 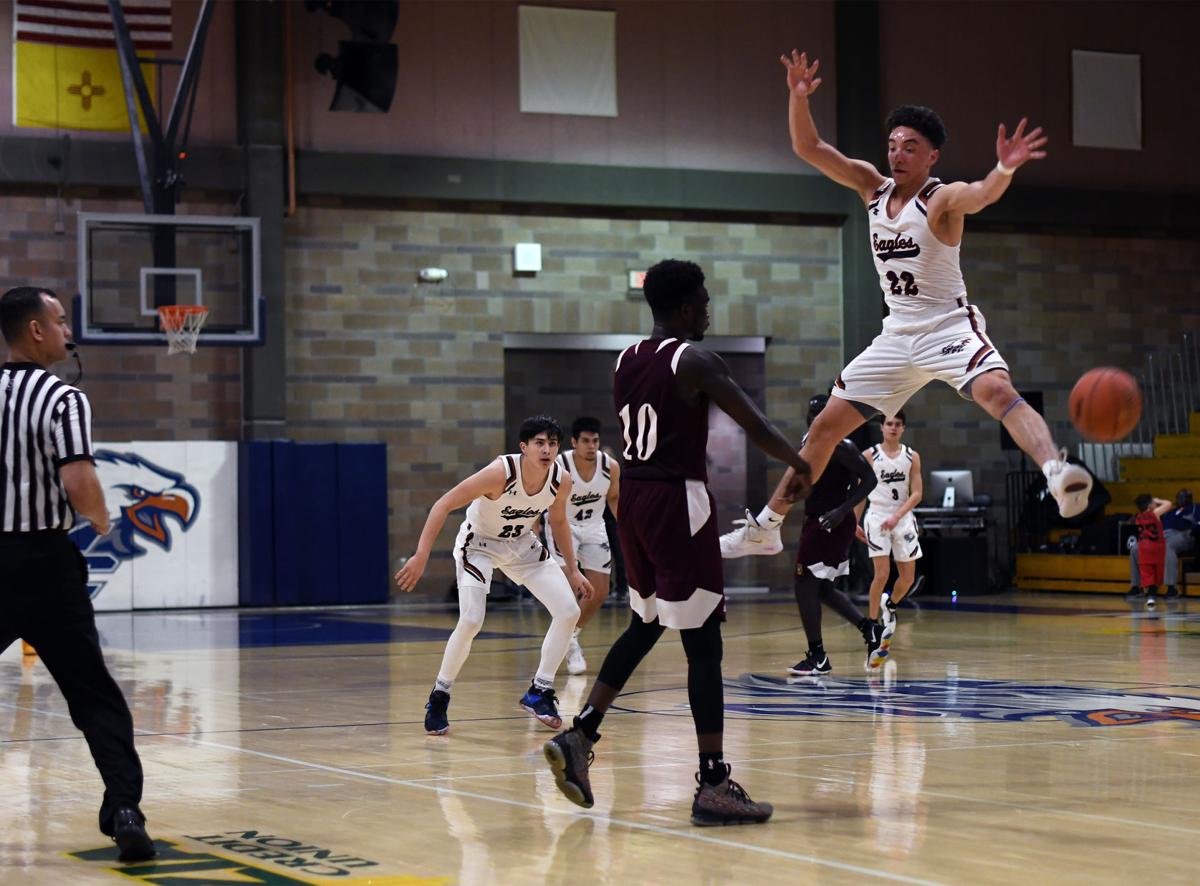 Northern New Mexico freshman Reyes Herrera leaps as Park University Gilbert (Ariz.) guard Saad Ali passes the ball during a game on Friday in the Eagles Memorial Sportsplex. The Eagles are in a position to advance to the Association of Independent Institutions Conference Tournament. 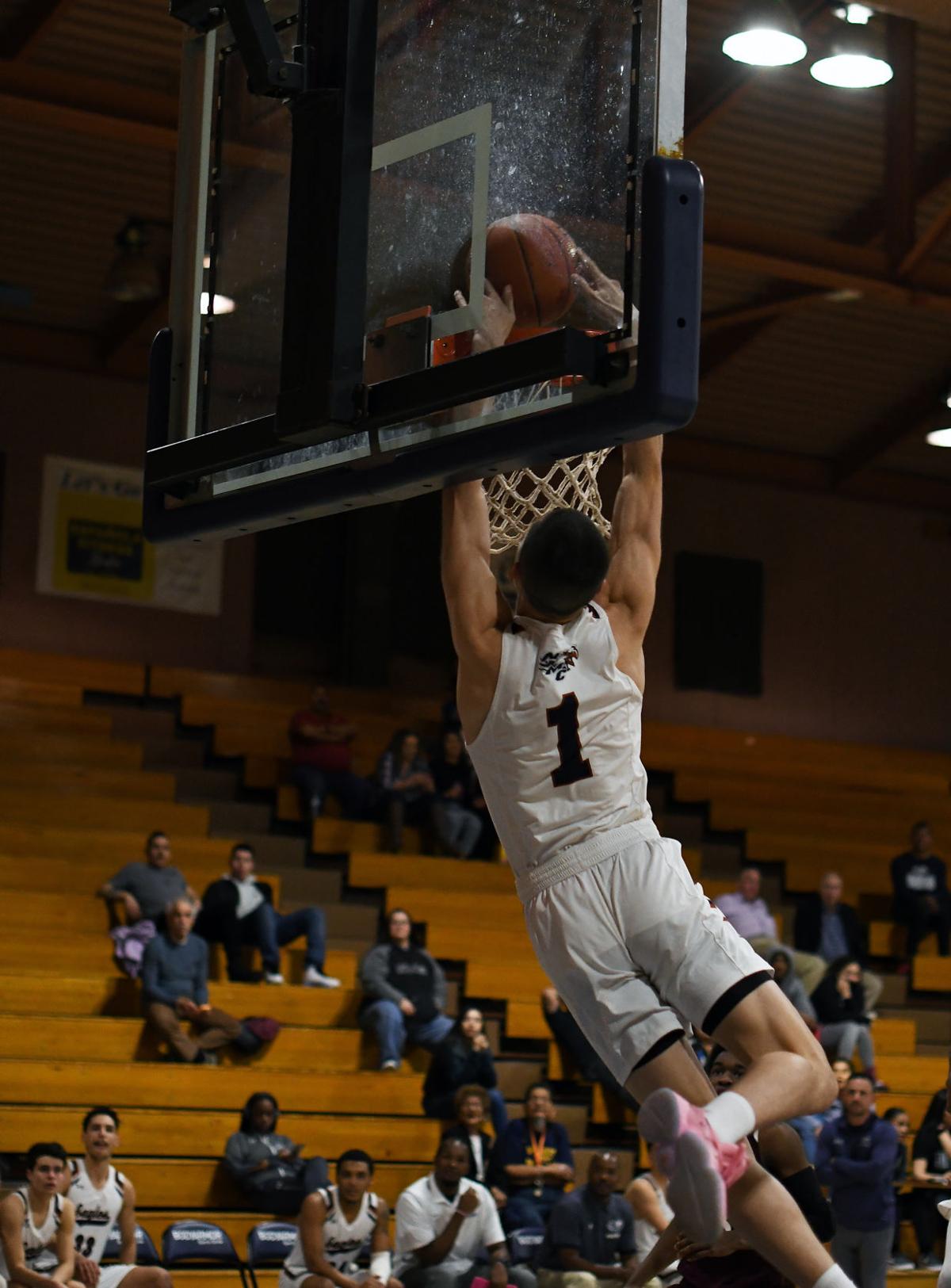 Northern New Mexico junior Estevan Martinez dunks the ball during the Eagles' 88-66 win over Park University Gilbert (Ariz.) on Friday. Martinez is the second-leading scorer (13.3 PPG) for the Eagles, who are 8-15 and winners of their last six games. 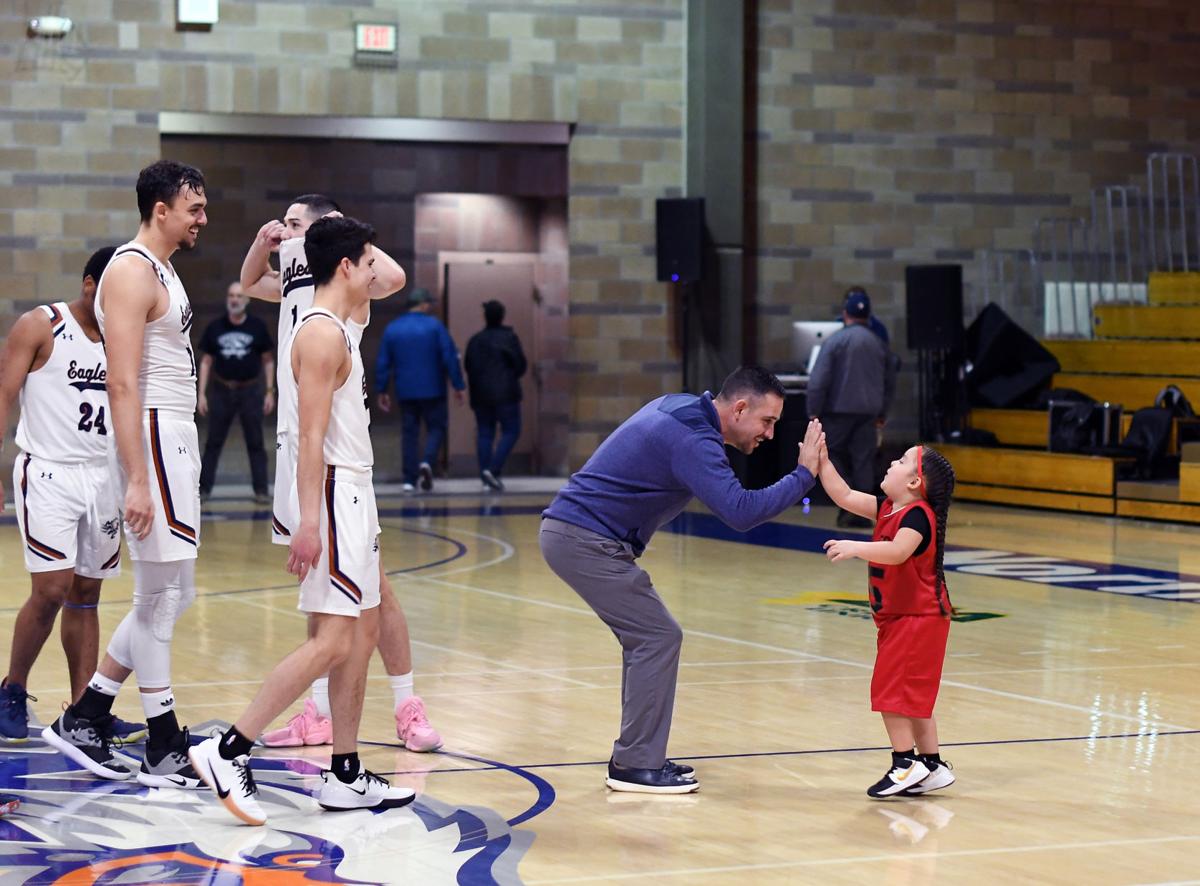 The Northern New Mexico College men’s basketball team celebrates with fans after an 88-66 win over Park University Gilbert on Friday. The Eagles finished the regular season on a six-game winning streak and are 8-15 overall.

Northern New Mexico freshman Reyes Herrera leaps as Park University Gilbert (Ariz.) guard Saad Ali passes the ball during a game on Friday in the Eagles Memorial Sportsplex. The Eagles are in a position to advance to the Association of Independent Institutions Conference Tournament.

Northern New Mexico junior Estevan Martinez dunks the ball during the Eagles' 88-66 win over Park University Gilbert (Ariz.) on Friday. Martinez is the second-leading scorer (13.3 PPG) for the Eagles, who are 8-15 and winners of their last six games.

The Northern New Mexico Eagles have come too far in what could have been a disastrous season for it to end.

Two months ago, the Eagles were rocked by suspensions stemming from a bench-clearing fight that took away three key players for the rest of the season. Now, they are the owners of a six-game winning streak and an 8-15 record while clinging to a dream of playing in the Associations of Independent Institutions Tournament at the end of the month.

Funny how much things can change in such a short amount of time.

Northern New Mexico finds itself with a tenuous hold on eighth place in the conference rankings, which are updated every two weeks, needing to stay in the top eight to qualify for the tournament. One month ago, the Eagles were 2-15 and reeling from a six-game losing streak as they struggled through suspensions of a variety of lengths that were handed out to 11 players for their part in a fight against Haskell Indian Nations University on Dec. 15.

Tyrique Weaver, Alexander O’Guinn and Javier Roper were suspended for the season, meaning Northern New Mexico lost its second-leading scorer in Weaver plus key rotational players in O’Guinn and Roper.

While the outlook did not look good, it was not as gloomy as it might appear.

“The coaches really helped us stay the course,” said sophomore guard Jeremy Anaya, a 2017 Capital graduate. “We started peaking at the right time. It’s very surreal, considering who were playing in the middle of the season. There was a lot of youth on the team — we literally had only freshmen and sophomores at one point after the incident.”

On the fly, Eagles head coach Ryan Cordova and his staff remade the team into one that relied on pushing the tempo, sharing the ball and playing tough defense, and with the underclassmen playing a vital role. It truly has been a team effort, as nine players average at least four points per game for the season and Northern New Mexico averages just under 77 points per game overall.

While senior Naquwan Solomon (17.5 ppg) and junior Estevan Martinez (13.3 ppg) lead the way in that category, Cordova said the strength of the team has been its ability to force defenses to guard the entire floor, especially in the halfcourt set. That is because he installed what he called a “passing offense,” which limits the number of options for each player to consider but encourages better, quicker ball movement.

And with offensive-minded players at almost every spot on the floor, defenses can’t focus on just Solomon or Martinez.

“Because we had true freshmen, in some cases, touching the ball, we wanted to limit the decisions they had to make,” Cordova said. “Now, there is less room for error, but it’s like in baseball. A pitcher’s [earned-run average] goes down when you eliminate errors in the field. That’s what we’re trying to do.”

A welcome midseason addition was 6-foot-9 freshman forward Damione Thomas. The Las Cruces Oñate graduate was on his redshirt season, but Cordova was forced to use him after the suspensions. He has been a welcome addition, averaging 7.7 points over the last 10 games, and his 3-point shooting ability opens the floor for the guards to attack the rim.

“He’s played amazing,” Anaya said. “He does a great job spacing the floor, and he brings out the four-man and the centers from the midline [in the paint] and he can hit open shots.”

Cordova noted that the team’s assist numbers shot through the roof. After averaging around 11.5 assists per game through the first 17 games, it has shot up to 16 per contest during the winning streak.

“Everything just flows so much easier,” Martinez said. “Coach always instilled it in our brains to never quit and that everything he has taught us will work as long as we believed in the program. It feels like everyone has bought into that, and we’re finally coming together as a team.”

That was never more apparent than in the regular-season finale against Arizona’s Park University Gilbert. After building a 41-30 lead, the Buccaneers slowed the tempo and took a 63-60 lead on Eric Patten’s bucket with 6:52 left. The Eagles didn’t panic, though, and reverted to the things that got them to this point in the season — sharing the ball and playing tough defense. Park University did not score in a 2:39 stretch and Northern New Mexico reeled off 12 straight points for a 72-63 advantage.

“As long as we could focus on what we could control, like getting rebounds and pushing the ball upcourt and giving up the ball early, we were going to be alright,” Anaya said. “That was a huge adjustment from early in the season.”

Now, all the Eagles can do is sit and wait to see how the rest of the AII conference season plays out. Cordova said Northern New Mexico could possibly move into the seventh spot for the tournament, depending on how Arkansas school Crowley’s Ridge does this week. Cordova said if it loses two of three games, it could further solidify the Eagles’ spot in the conference tournament — something that wasn’t even on the radar screen a month ago.

“We just focused on one game at a time and taking care of what we could take care of,” Cordova said. “Everything is kinda falling in line.”

And no one is thinking about what happened in December.