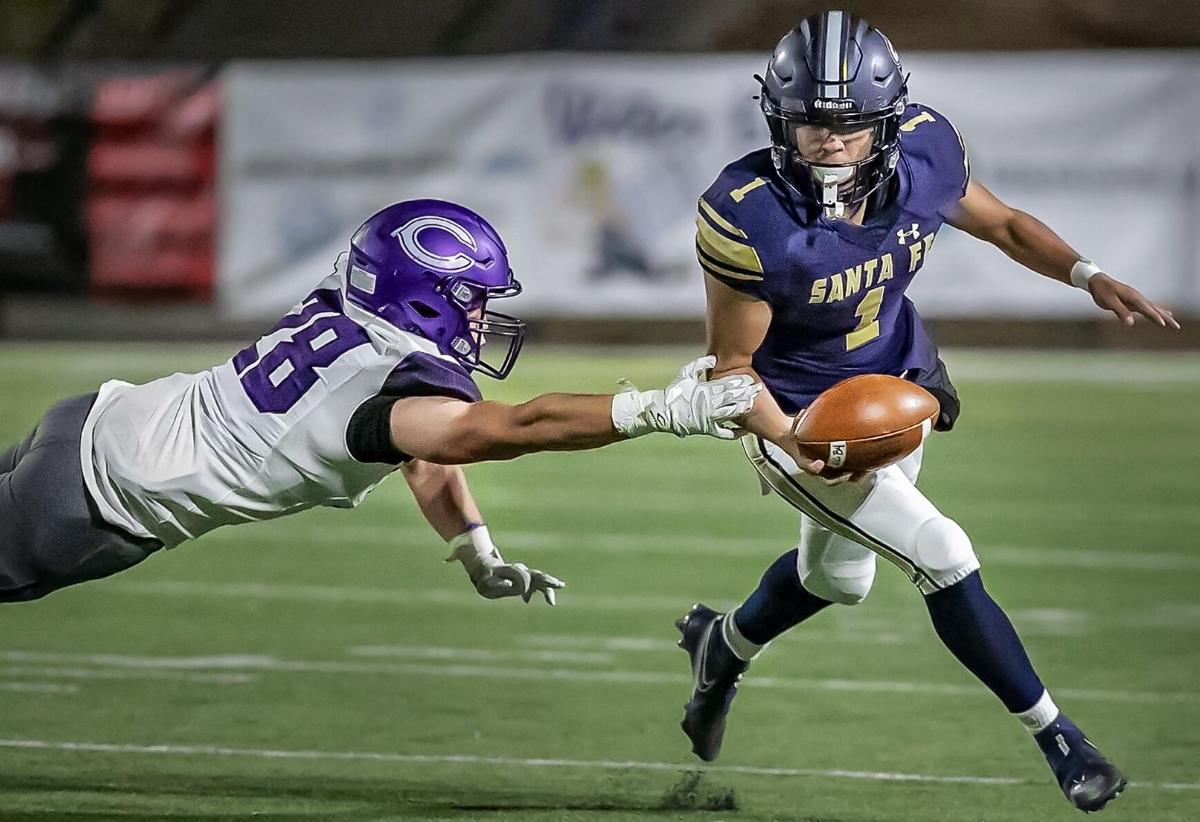 Demons quarterback Luc Jaramillo evades the Wildcats’ Mark Cabeen to scramble for a first down in a Class 6A matchup Friday at Ivan Head Stadium. The Demons lost 28-21 and fall to 5-3 on the season. 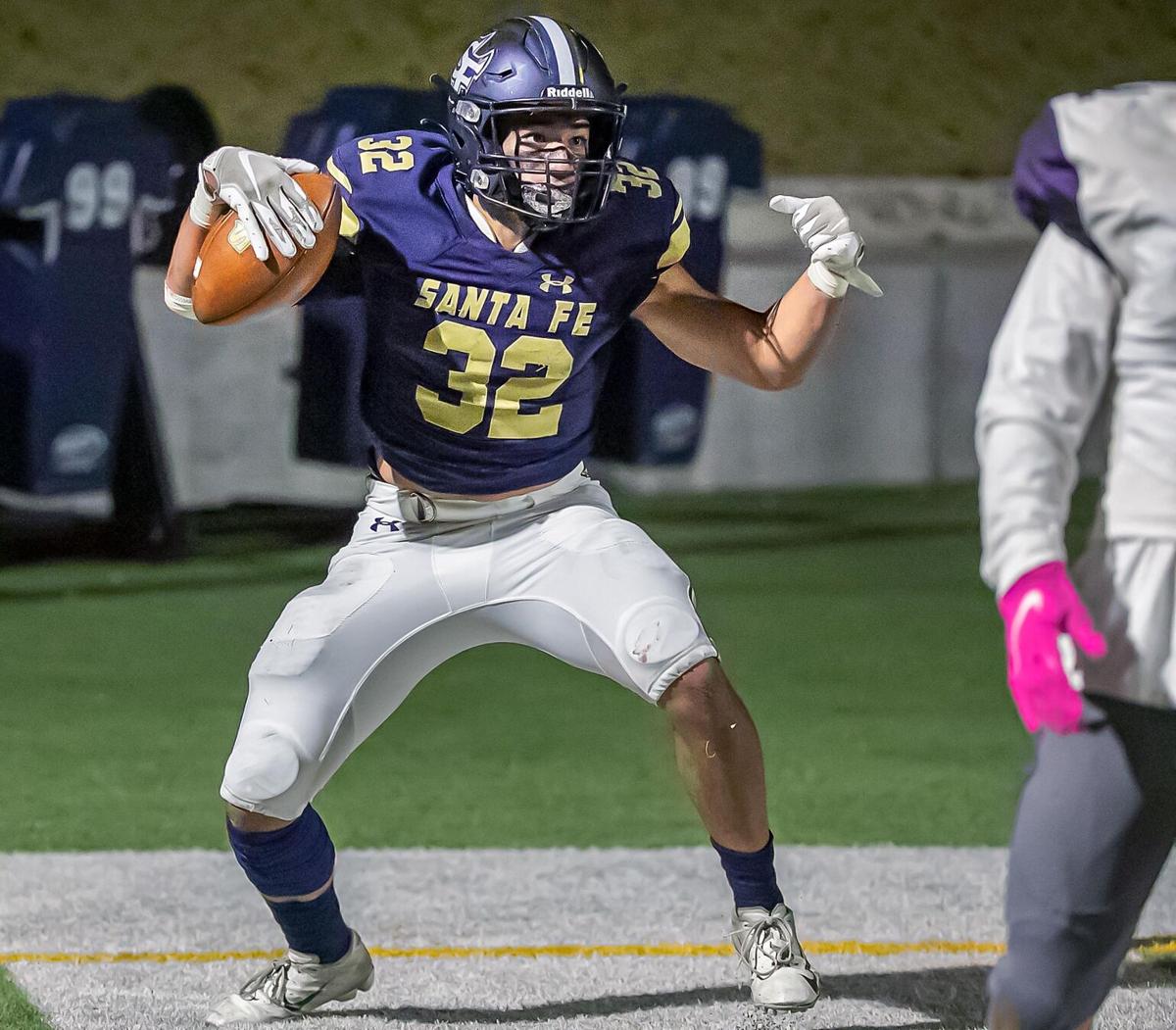 Demons running back Martell Mora celebrates a touchdown against the Wildcats in the first half Friday at Ivan Head Stadium. Santa Fe High lost to Class 6A rival Clovis 28-21. 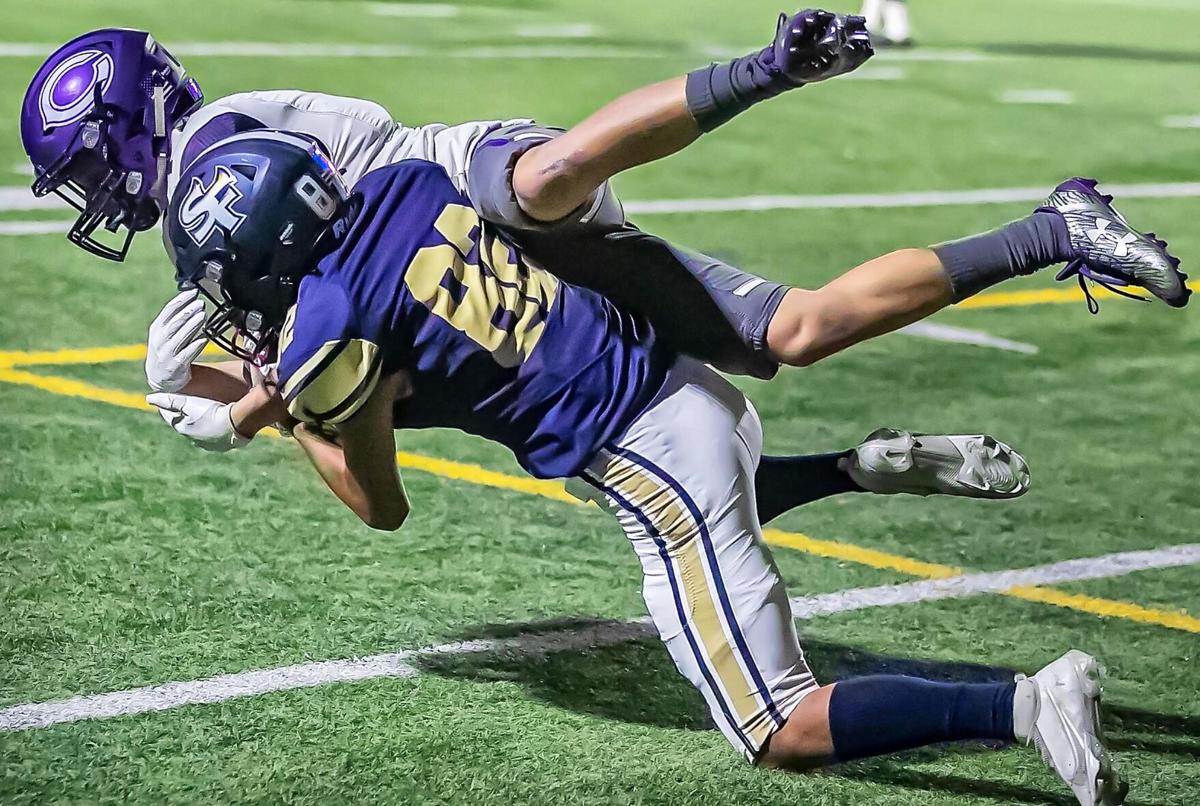 The Wildcats’ Jett Stone snares an interception from the clutches of Demons receiver Ethyn Tapia on Friday at Ivan Head Stadium. Clovis won the 6A matchup 28-21. 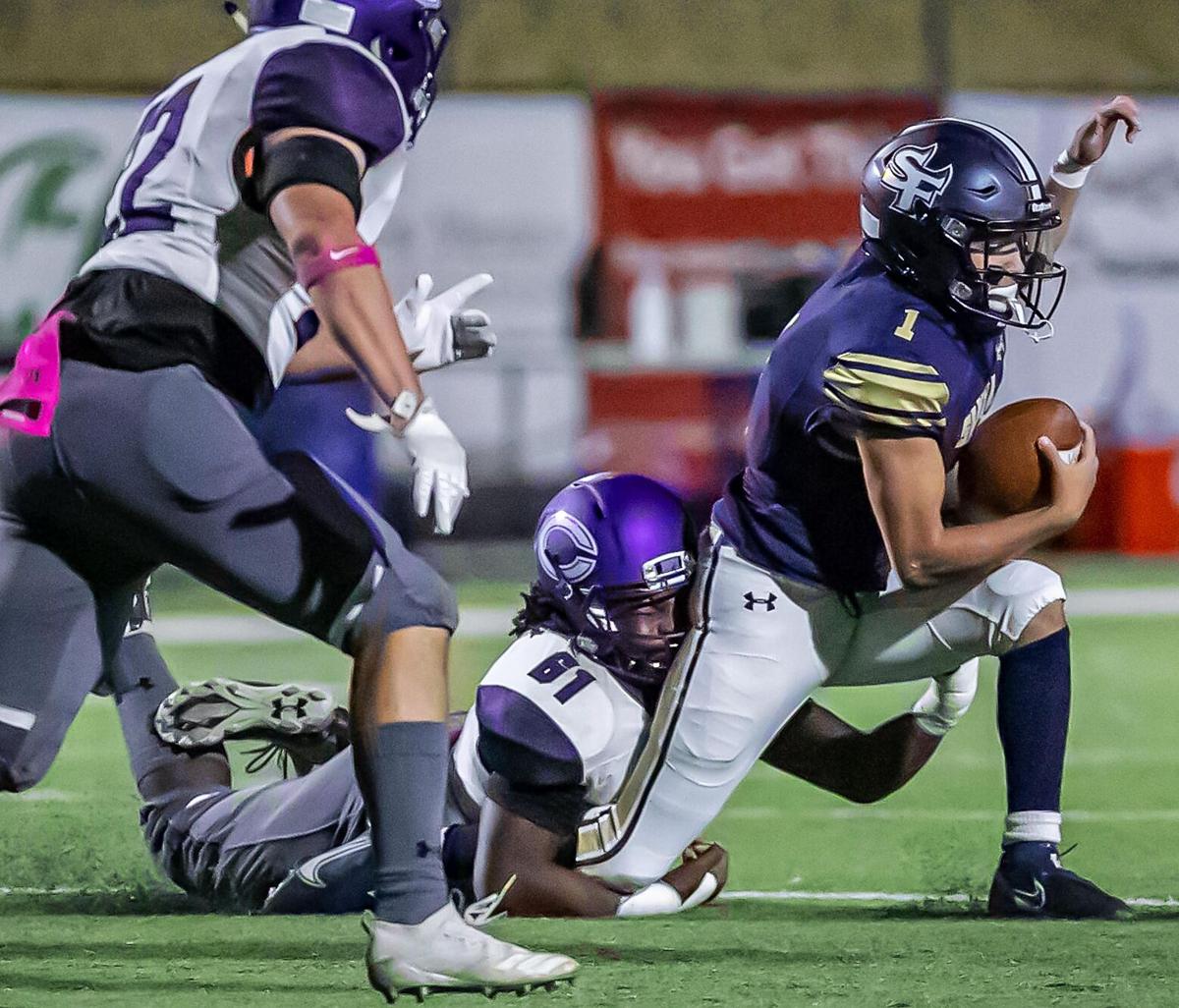 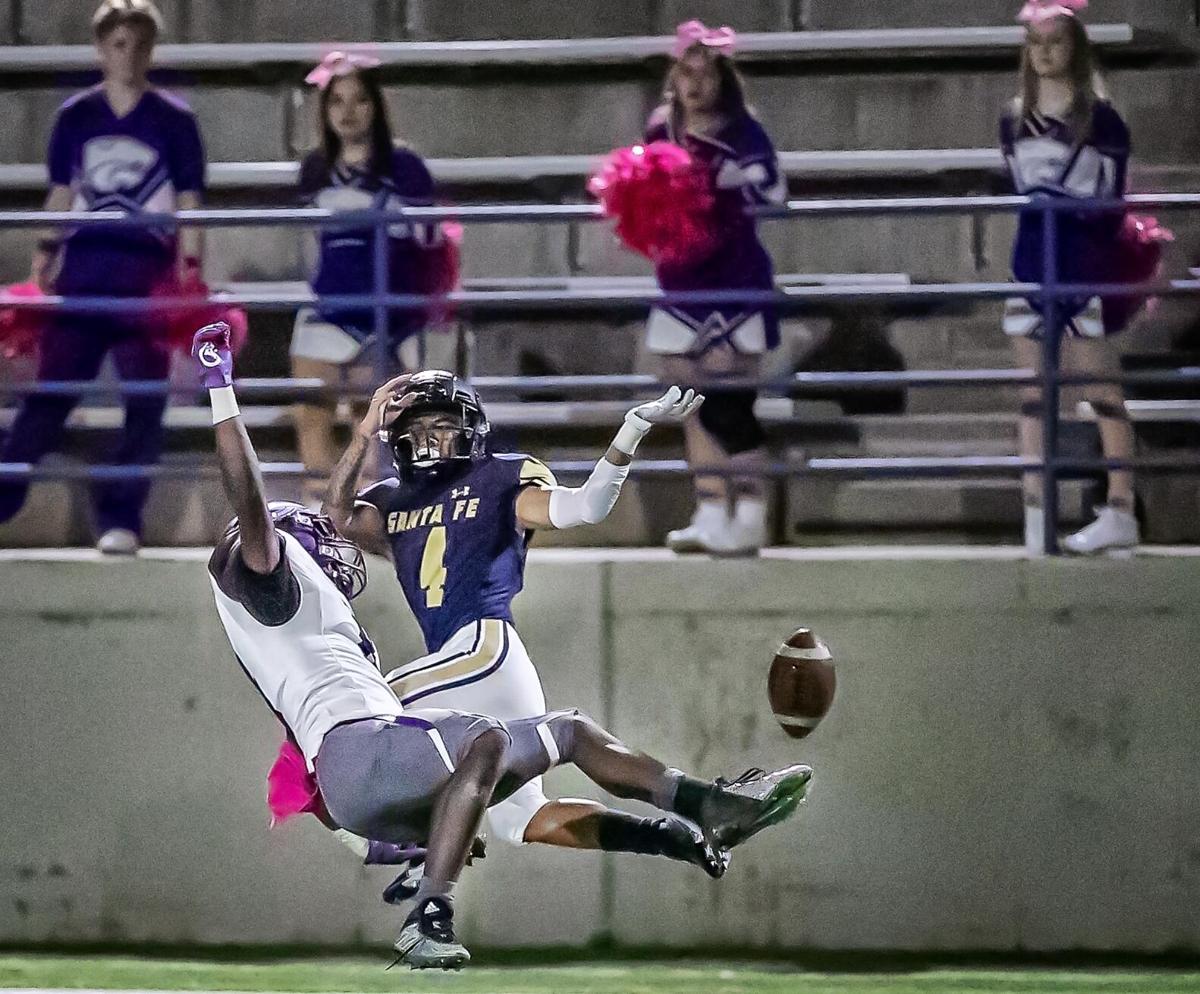 The Demons Jaeden Opetaia, right, breaks up a pass intended for the Clovis receiver Robert Nora during Santa Fe High's game against Clovis at Ivan Head Stadium on Oct. 8, 2021.

Demons quarterback Luc Jaramillo evades the Wildcats’ Mark Cabeen to scramble for a first down in a Class 6A matchup Friday at Ivan Head Stadium. The Demons lost 28-21 and fall to 5-3 on the season.

Demons running back Martell Mora celebrates a touchdown against the Wildcats in the first half Friday at Ivan Head Stadium. Santa Fe High lost to Class 6A rival Clovis 28-21.

The Wildcats’ Jett Stone snares an interception from the clutches of Demons receiver Ethyn Tapia on Friday at Ivan Head Stadium. Clovis won the 6A matchup 28-21.

The Demons Jaeden Opetaia, right, breaks up a pass intended for the Clovis receiver Robert Nora during Santa Fe High's game against Clovis at Ivan Head Stadium on Oct. 8, 2021.

Like a finely woven sweater, all it took for the unraveling of the Santa Fe High Demons on Friday night was a strand of thread.

Head coach Andrew Martinez found it where he always finds it — in the third quarter. When senior running back Martell Mora fumbled a handoff from quarterback Luc Jaramillo and fell on the loose ball for a 3-yard loss to open the second half, Martinez muttered under his breath and shook his head.

From there, the foreshadowing slowly began. Despite holding a 21-6 lead in the third quarter against the Clovis Wildcats — a program the Demons have not beaten in more than 40 years — the Demons defense steadily faltered the rest of the night, as Clovis scored touchdowns on three straight possessions. Then, Wildcats senior defensive back Robert Nora continued his storybook district season with a game-clinching interception of Jaramillo at the Clovis 1-yard line to secure a 28-21 District 2/5-6A win at Ivan Head Stadium.

A week earlier, Nora caught a 91-yard touchdown pass in the final 2 minutes that earned the Wildcats their first win of the season with a 25-24 victory over Albuquerque High.

The outcome essentially ended any hopes Santa Fe High (5-3 overall, 1-3 in 2/5-6A) had of making the playoffs, even though it mathematically has a chance. All the Demons have to do is beat Albuquerque La Cueva, the third-ranked team in 6A, and Albuquerque High to make it a possibility. But Jaramillo, who had perhaps the best game of his four-year varsity career with 128 passing yards with a touchdown and 78 more on the ground, knew what was at stake.

“This was a must win, and we didn’t,” Jaramillo said with tears streaming down his face.

Martinez sat sullen in the video room after the game, unsure of how to get his team to respond to its most dire of circumstances.

“The third quarter, I don’t know what happens to us,” Martinez said. “We just have some sort of mental issue, and we can’t seem to get past it. I thought for sure tonight we were going to go out and play well in that third quarter.

The moment was there for the taking, though. The Demons controlled the game in the first half, but two turnovers prevented a 14-6 halftime lead from being larger. However, the team’s biggest bugaboo this season has been shoddy third-quarter play, and this game was no different.

Santa Fe High punted on that first drive of the quarter, then the Wildcats (2-4, 2-1) drove to the Demons’ 28-yard line when the defense made its last big stand of the night. When quarterback Milo Acosta’s third-down pass fluttered into the waiting arms of Demons linebacker Adan Chavez, the senior motored down the visiting sideline for a 70-yard interception return to up the margin to 21-6 with 8:23 left in the third.

So much hung in the balance at that point for Santa Fe High:

u The program’s first winning record since 1998.

u Its first win over one of the top programs in the state since the 1970s.

u A playoff spot, provided it beat either the Bears or the Bulldogs.

u Maybe erasing some of the losing culture that has dominated the Demons for much of the past 35 years.

Instead, the Demons pulled at the dangling thread and watched their beautiful wardrobe disappear in a cascade of poor execution. Their defense could not stop Acosta, who went from throwing the ball to running it on option keepers. He managed 62 rushing yards and two touchdowns in the second half, to go along with an 8-for-13 performance through the air for 143 yards. Acosta guided Clovis on a 64-yard drive after his interception and capped with a 1-yard touchdown run up the middle to cut the margin to 21-13 with 5:12 left. The Demons embarked on a three-and-out, giving Acosta and the suddenly breathing Wildcats the opening they needed. “On that drive, defensively, we were misaligned five times,” Martinez said. “I don’t just understand. I think in their heads, it’s like, ‘We didn’t come out the way we were supposed to, and they’re driving.’ We’re doing things so uncharacteristic of ourselves.”

Acosta didn’t mind that. He again led his offense on a scoring drive, this one from 65 yards out and capped it with a 2-yard touchdown run. His 2-point pass to running back Cam Dickson tied the score at 21-all with 26 seconds left in the quarter.

When the Wildcats defense forced yet another Santa Fe High three-and-out, the Wildcats pounced. They needed 12 plays and 5 minutes to go 76 yards for the winning score. They were aided by a pass interference penalty by Demons cornerback Joaquin Martinez on a throw to Nora on a third-and-12 play from the Santa Fe High 36. Four plays later, Dickson ran it in from a yard out for a 28-21 Clovis lead with 4:45 left.

Nora said the penalty call was the push the Wildcats needed.

“That play was what gave us momentum for the rest of the game,” Nora said. “After that, we were just going after it.”

Yet, Jaramillo was undeterred. He ran for 41 yards on the next drive, with 32 coming on the first play that set the Demons up at the Clovis 36. The Demons reached the Clovis 13 when the drive stalled, thanks in part to an illegal substitution on a third-and-8 play with 1:15 left. Pushed back five yards, Jaramillo tried to complete the comeback when he threw to Martinez in the right flat, but Nora was there for the interception that sealed the victory for the Wildcats.

All the Demons could do was hold what was left of what could have been something beautiful.

Within time the players in the program will learn to win the big ones. Rome wasn't built in a day.