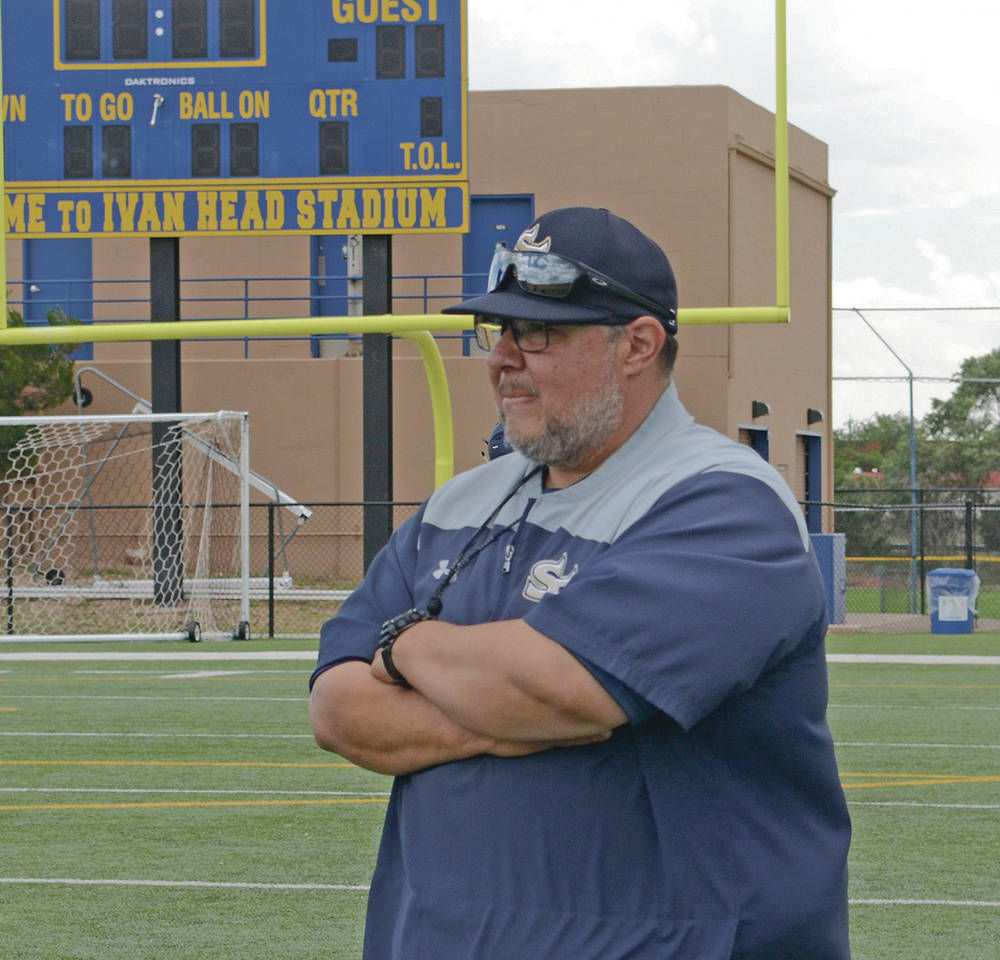 Vera Jo Bustos used to work with the women Lobos basketball team. She consults with the Santa Fe High Demons to work on mentality training and motivational speaking, to sharpen the focus and channel positive thinking. New Mexican file photo

Vera Jo Bustos used to work with the women Lobos basketball team. She consults with the Santa Fe High Demons to work on mentality training and motivational speaking, to sharpen the focus and channel positive thinking. New Mexican file photo

Turns out that the most important place on a football field is the half dozen inches (give or take) of gray matter between a player’s ears.

Andrew Martinez is all-in with finding a way to sharpen the focus in that space. It’s why the third-year Santa Fe High football head coach pulled out all the stops after his Demons fared well but still lost in their season opener two weeks ago.

The day after his team fell 6-0 to perennial power Las Vegas Robertson, he called one of the most visible athletes to come out of Northern New Mexico in the last 20 years and sought her advice.

Vera Jo Bustos had just walked away from her position with the University of New Mexico women’s basketball coaching staff, setting the stage for an ambitious new career path that has her heavily invested in three business ventures.

One of them is Mentality Solutions, a fledgling venture she created. Its purpose is to consult clients with mentality training and motivational speaking, to sharpen the focus and channel positive thinking.

Martinez is the uncle to the husband of one of Bustos’s sisters and he was aware of what she could offer his team. He’d always been curious about what he considers a largely untapped science in competitive sports.

“There’s so much more to be explored with the mental preparation part of it,” Martinez said. “We’re just starting to understand what we can do with this.”

Martinez had Bustos visit the Santa Fe High campus and address 30 of his players. It was followed with players filling out questionnaires Bustos analyzed so she can set up one-on-one sessions with the Demons. Many of the players were reluctant to share at first. By the end of the session, she had a captive audience.

“There’s a phrase I use for people who deal with some of the nerves you get when doing business, playing sports, when trying anything important, and it’s self-limiting beliefs,” Bustos said. “So often you limit your own ability with nothing more than a poor mental approach. Before you know it, you’re faltering, and the majority of it is self-induced.”

Mentality Solutions is a three-pronged approach to reaching potential clients, Bustos said. It starts with mentality training, continues with motivational and keynote speaking and adds a business consultation service that keeps the other elements evolving.

As if that’s not enough, she is keeping her hand in the basketball side of things by coaching with VJ’s Elite, a youth basketball training program that she began in her off time with the Lobos.

What’s more, Bustos is working to become a camp director with PGC Basketball. That gig has her traveling out of state three times in the coming months.

And she’s also writing a book about her professional playing days in Greece. After an All-America career in college at Adams State, she was one of the few NCAA Division II players to play for pay in that part of Europe.

“I like to tell people that there was a stretch when I was with the Lobos where I didn’t turn on the TV at home for at least three months,” Bustos said. “It keeps me pretty busy.”

But not so busy that she didn’t have time to travel to her alma mater at West Las Vegas to give the same mentality programming delivery to the Dons’ football team.

The early returns are promising. Santa Fe High won its second game, beating Moriarty last weekend. Whether or not Bustos had any impact is unclear at the moment, but this much is certain: It definitely didn’t hurt.

“I’m telling you, the kids really responded to her,” Martinez said. “I’ve been really, really intrigued by some of the stuff she’s doing. There’s such a big demand for it out there and it’s something that can help us improve. I mean, we can improve physically as football players on the field with bigger, stronger, faster, but we’ve never really paid that much attention to the mind. It’s huge and we’re just now learning how to deal with it.”