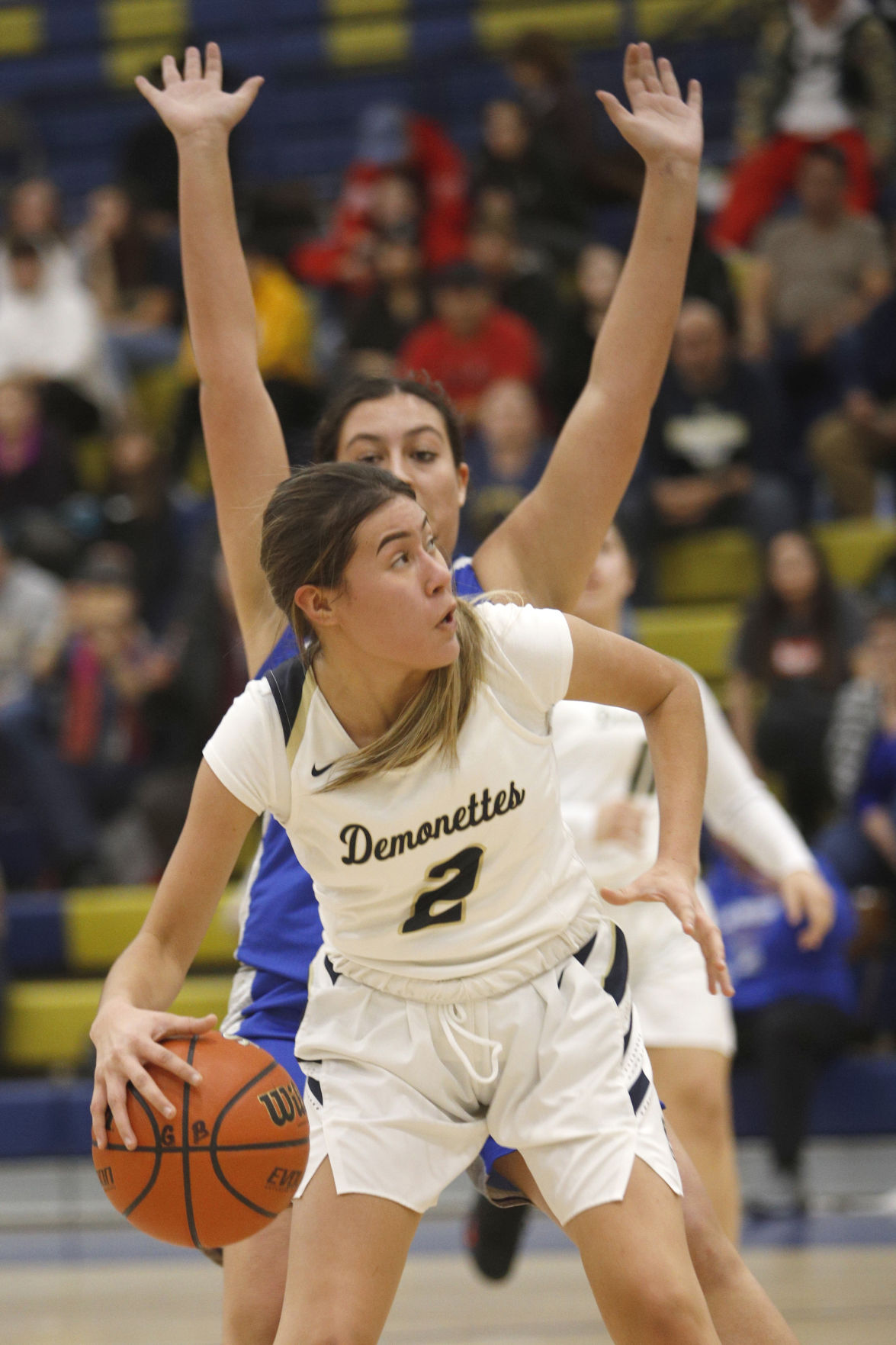 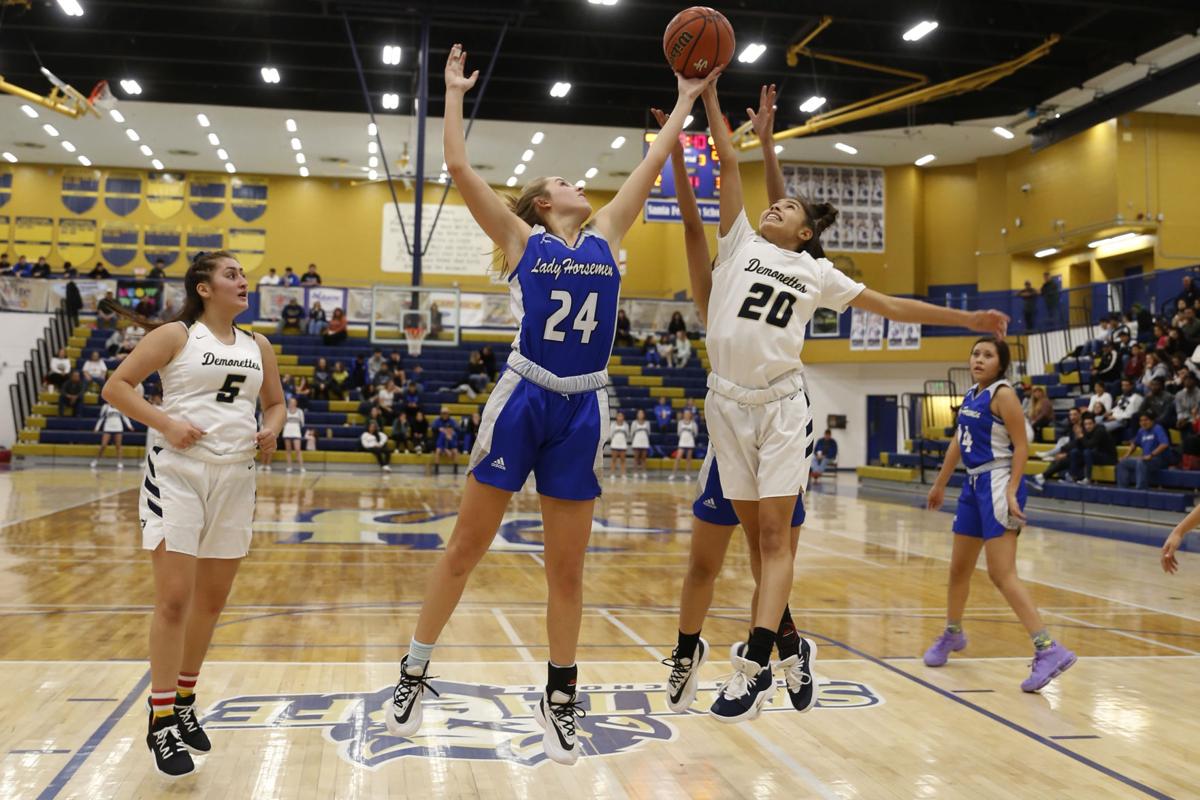 There was no need for heroes Tuesday night.

Besides, it’s not how the Santa Fe High Demonettes got to this point.

A team of mostly underclassmen had pulled itself back to an even record by learning to work together and share the ball. For a half, Santa Fe High forgot all about that in a nondistrict girls basketball game against the St. Michael’s Lady Horsemen in Toby Roybal Memorial Gymnasium.

A first half of frustration and failure ensued before the Demonettes remembered who they were. Their spread-the-wealth philosophy returned in a big way in the second half, as they outscored St. Michael’s 28-21 to secure a 44-32 win and push their record above the .500 mark at 8-7. It also marked Santa Fe High’s third straight win, and they weren’t against just any three teams. The Demonettes beat Española Valley, Pojoaque Valley and the Lady Horsemen — all of whom made the state tournament and should again this season.

That might the best sign yet that Santa Fe High is making gains, considering it lost three seniors who opted to not return this season. In their place were three freshmen who suddenly were promoted to the varsity, and had to learn quickly how to play at that level.

The key, according to Demonettes head coach Nate Morris, was to find more a more balanced attack.

“Our scoring is spread out,” Morris said. “We don’t have anybody averaging 10 points every night.”

The Demonettes demonstrated that against the Lady Horsemen. Not one player broke double digits, as sophomore Kabreya Garcia led the team with eight points. But Alexis Espinoza had six. The trio of Gabby Malczewski, Angie Perez and Olivia Montoya each had five.

In all, 10 players found their way to contribute in the scoring column, and it makes the Demonettes harder to defend because there is no rhyme or reason as far as who scores and how.

“It’s a big difference,” Garcia said. “It’s not like, ‘These two girls are the shooters, the rest they don’t do much. Just focus on these two.’ Now, everyone plays the game so you have to be ready for anything.”

That was a far cry from last season, as a lot of the scoring responsibility fell on the senior duo of Taylor Salazar and Mari Fernandez. Teams made a point of using gimmick defenses to shut the pair down and force the rest of the team to manufacture points.

That game plan hasn’t worked because teams can’t figure out the weak links. So, the Lady Horsemen approached the game by using a 2-3 zone that focused on trapping players in the corners and harassing the Demonettes guards once they got past halfcourt. That strategy seem to get Santa Fe High out of its comfort zone and led to players simply hoisting 3-pointers or driving to the basket without any intent on dishing the ball to open teammates.

While the turnovers ceased in the second quarter, the “ready, fire, aim” approach did not as Santa Fe High started chucking 3-pointers in lieu of attacking the basket. Thankfully, Perez and Montoya knocked two triples and helped the Demonettes built a 14-8 lead before the Lady Horsemen finished the second on a 12-2 run to forge a 20-16 lead when Rachel Morgan banked in a 3 at the buzzer.

“I think it was their nerves, more than anything,” Morris said. “Playing a crosstown rival. You’re playing against girls you know. I get it. The same thing happened to us in high school. I think we were just too hyped, and we had to calm down.”

The second half saw a more composed, determined group that simply took advantage of the overplaying St. Michael’s defenders by shot-faking and driving to the basket. The Demonettes drove to the basket the first three possessions and recorded an Espinoza layup, a pair of Garcia free throws and a pair of missed free throws from Perez.

When the shots didn’t fall, Santa Fe High crashed the glass and grabbed four offensive rebounds in the quarter that fueled a decisive 17-2 run.

“We slowed it down and we started running our offense and defense better,” Garcia said. “We just took care of the ball because the first half was rough.”

Only a Carly Gravel 16-footer kept the Lady Horsemen from being shut out of the quarter. As it was, they were just 1-for-13 in the third and found themselves down 33-22 after Maci Cordova scored on a breakaway layup with 1:11 left in the quarter.

The Demonettes finish of the nondistrict season at Las Vegas Robertson on Thursday, then comes the most crucial part of the year: District 5-5A play. Currently, Santa Fe High is one of two district teams with a winning record, and sits ranked 16th in MaxPreps.com’s Freeman rankings. Morris believes his team has a shot at making it to the state tournament for the first time in three seasons.

So long as they remember that they don’t need heroes. Just each other.