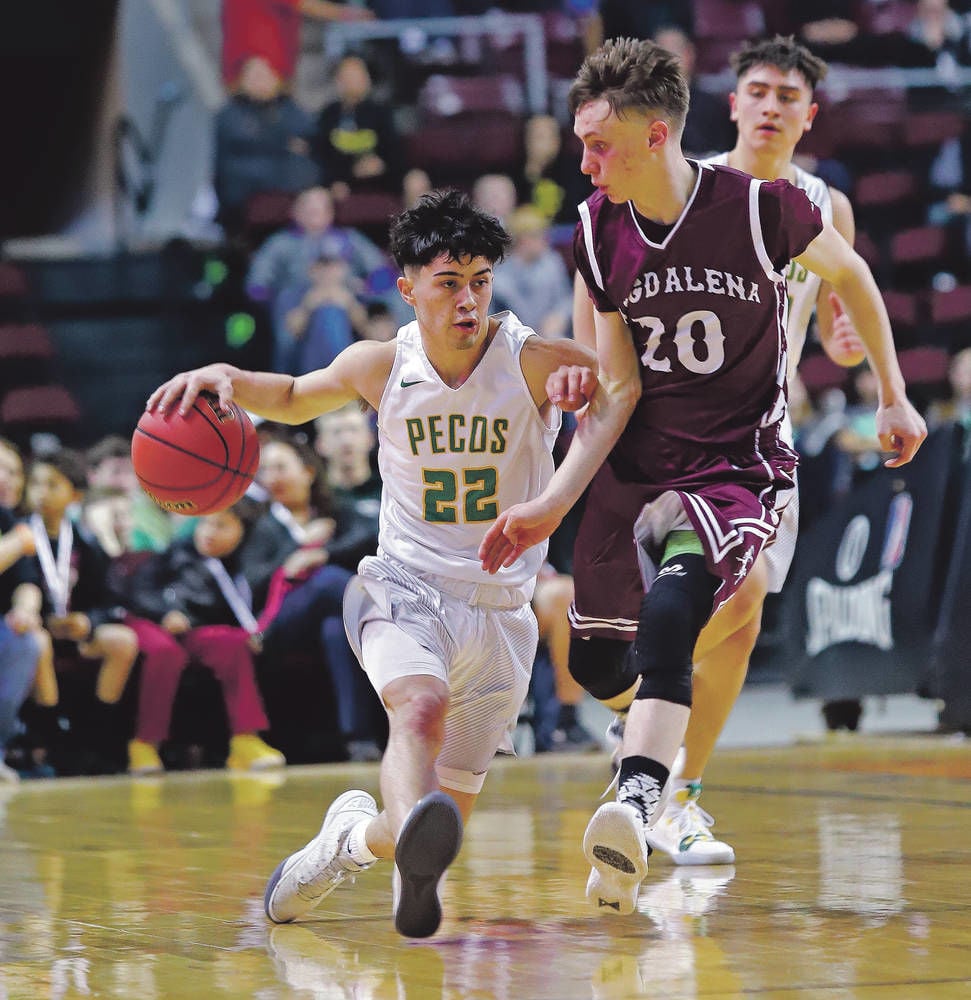 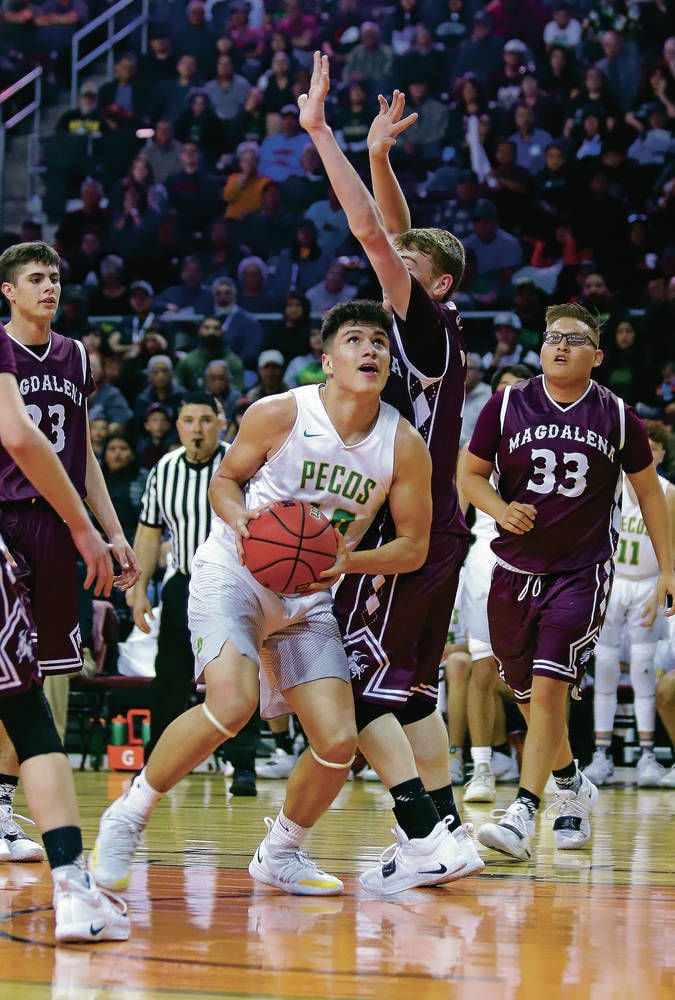 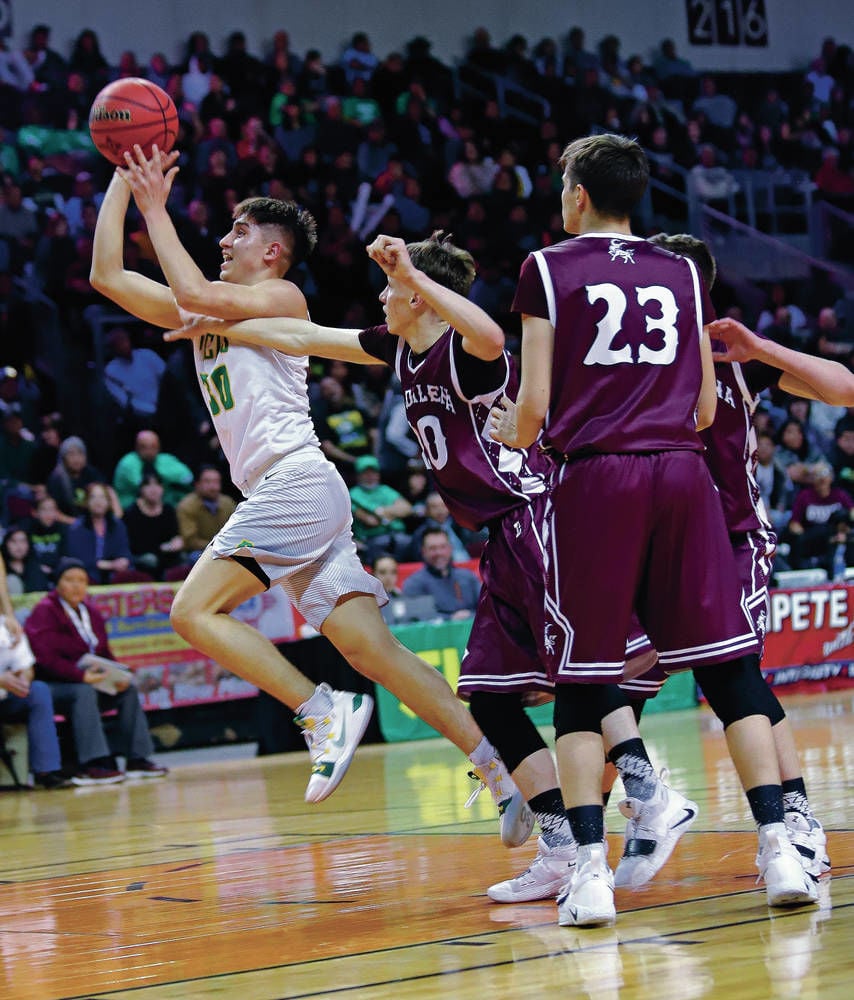 Pecos’ Xavier Padilla tries to gain control over the ball while being pursued by Magdalena’s defenders during Wednesday’s quarterfinal game at the Santa Ana Star Center on March 13, 2019. Gabriela Campos/The New Mexican

Pecos’ Xavier Padilla tries to gain control over the ball while being pursued by Magdalena’s defenders during Wednesday’s quarterfinal game at the Santa Ana Star Center on March 13, 2019. Gabriela Campos/The New Mexican

After Xavier Padilla finished an alley-oop layup, Omar Dominguez drilled a 3-pointer on the next possession and confidently skipped back down the court. Top seed and back-to-back defending state champion Pecos looked the part while taking its first lead of a Class 2A quarterfinal against Magdalena midway through the second quarter.

Following the quick offensive burst, the green and gold faithful in the stands at the Santa Ana Star Center in Rio Rancho sensed the start of a scoring run, but the Steers stayed stubbornly close until the final minute. With late-game rebounding and foul shooting, Pecos finally pulled away for a 57-45 win Wednesday afternoon.

The Panthers will face No. 4 Texico in a 2A semifinal 8 a.m. Friday in The Pit in a battle of District 7-2A rivals.

From the start, Pecos tried to bother its Socorro County opponent with full-court defense after each made basket. As the Panthers switched between man-to-man and trapping presses throughout the first half, Magdalena junior guard Kyle Julian consistently handled the pressure to cross half-court and create easy looks for his teammates. The Steers led 11-10 at the end of the first quarter. After Padilla and Dominguez’s consecutive buckets gave Pecos a 15-11 lead in the second, Magdalena called timeout, regrouped, and took a 25-24 lead into halftime.

After two quarters, Pecos had been out-rebounded 18-9 by a Magdalena team whose tallest player is listed at 6 feet.

“That halftime talk was telling us to get better position. They didn’t have much height, but they outrebounded us by getting in front of us,” 6-foot-3 Pecos junior forward Ismael Villegas said. “I might have underestimated them a little bit. They came to play.”

In the second half, the Panthers won the rebounding battle 25-18, thanks to the effort Villegas and the 6-foot-1 Padilla. Neither team scored in the final four minutes of the third quarter as Pecos held onto a 34-31 lead.

Entering the quarterfinal, Pecos (25-3) was 2-3 in single-digit margin games. In the fourth quarter, the Panthers looked destined for a sixth tight finish of the season, but Magdalena missed a free-throw attempt that would have tied the game at 41 and got no closer. Dominguez canned his fourth and final 3 of the game on the next possession and Pecos at last strung together a scoring run, making nine of its final 12 free throws to close the game on a 16-5 run.

The Panthers returned to Pecos on Wednesday night to sleep in their own beds and practice in their own gym Thursday. At 8 a.m. Friday at The Pit, the Panthers will face Texico with a chance to reach their third straight final. In the regular season, Pecos beat Texico 79-47 on the road and 55-46 at home.

“We let them get to the rim too easy tonight. That’s what we need to fix,” said Pecos coach Ira Harge Jr. “We have a very tough and tenacious Texico team that we have to go up against next.”

Texico advanced to a Class 2A semifinal with a 69-58 win over Mora on Wednesday afternoon. The Wolverines led by two at the half before extending their lead to double digits by winning the third quarter 14-6. Senior guard Dalton Thatcher made seven of his 14 field goals and 16 of 19 free throws to finish with a game-high 33 points.

On the other side of the 2A bracket, Newcomb from San Juan Conty used a relentless full-court press to stifle McCurdy for a quarterfinal victory. McCurdy turned the ball over 26 times and trailed by double digits for most of the game before cutting the lead to nine with two minutes remaining. Sophomore guard Andres Martinez led the Bobcats with 12 points while senior guard Ernesto Martinez added 10.

The Roadrunners were within 22-18 at the half of a 1A quarterfinal at Bernalillo High School, but the sharp-shooting Foxes overwhelmed the in the second half.

Fort Sumner outscored NMSD 25-10 in the third quarter to end all doubt of the outcome. In his final game as a Roadrunner, Deven Thompson had 12 points and 13 rebounds, while Bruce Brewer had a team-high 13.